Trying NOT to lose possessions along the way...! 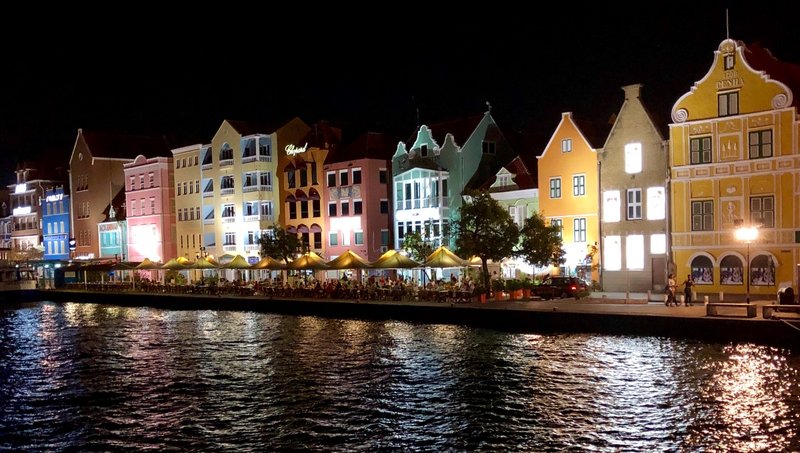 The Willemstad waterfront lit up at night

This was almost the spring break trip that never happened. At the last minute, things fell into place and I was winging my way to sunny, warm Curacao after all, while Columbus fought off the lingering clutches of winter. Although this would be country #87, I immediately proved some things never change. Upon unpacking at the Boutique Hotel t Klooster, I realized I’d left my iPad in the seat pocket of the plane. This was AFTER leavingit at the ticket counter in Columbus that morning and not realizing it till I was past The security checkpoint. Sigh. I guess I will never shake my inner Hansel and Gretyl, leaving a trail of my things across the world! Luckily, both worked out and I am able to type this blog entry on the iPad. 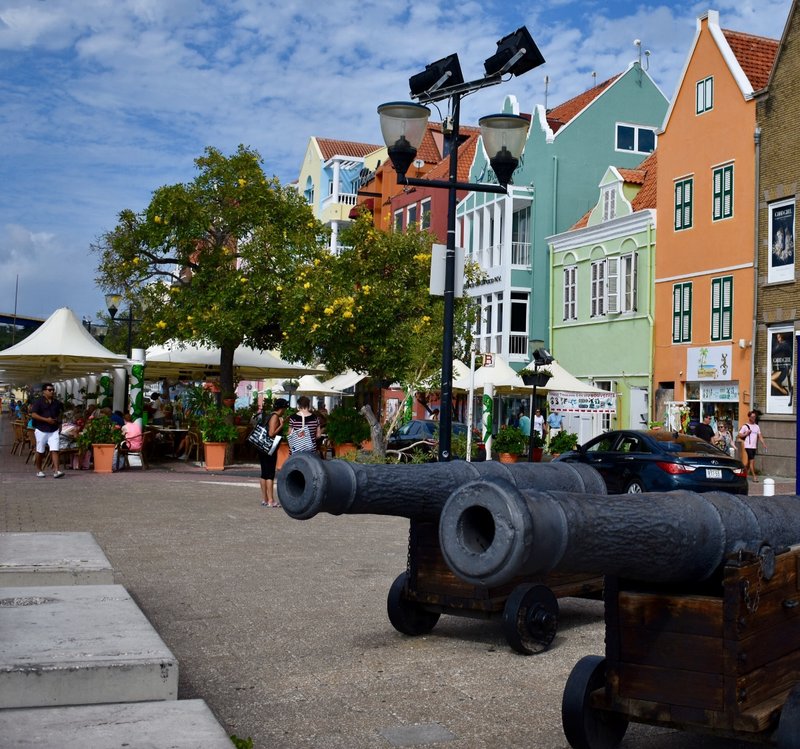 Daytime view of the waterfront

After making sure my iPad was in safe hands and could get it tomorrow, it was off to get some supplies and find dinner. It was obvious that Cafe Old Dutch was popular with both locals and visitors. The food was excellent and the beers were tasty, too. A peculiarity of paying by credit card in Curaçao is all prices are first converted to U.S. dollars before charging. Supposedly, the former Dutch colony’s Guilder is pegged permanently to the dollar at 1.75. After dinner and a few beers, I walked to the Wilhelmina Bridge, a pontoon bridge that spans the ocean inlet which the capital city of Willemstad is built around. A cool feature is thaa it is lit up at night with changing colors. An even cooler and imminently practical feature is it is a swinging bridge. When a large ship needs to pass through to the inner harbor, it detaches from one side and a tug pushes in open, swinging like a door against the opposite shore. Once the ship passes, it swings shut, the gates open, and pedestrians can cross again. 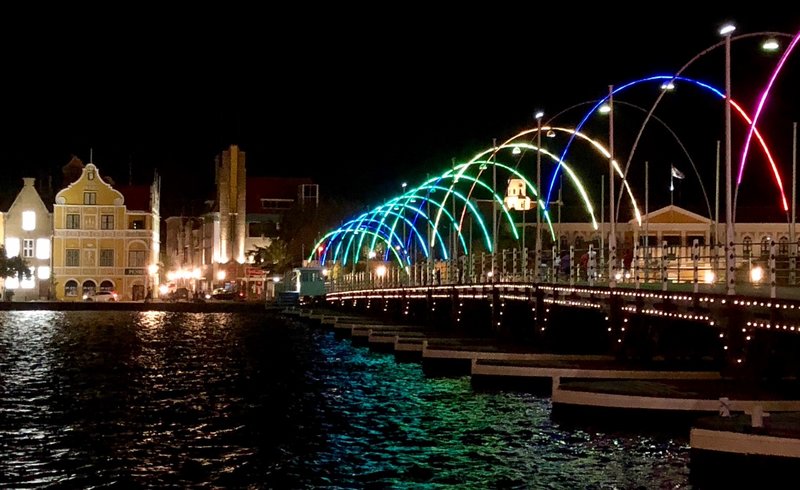 The Wilhelmina Bridge lit up at night

Many of the waterfront buildings are bright, Caribbean colors but colonial Duth in style. Their facades lit by floodlights, it is a pretty sight on a warm spring evening. The central town is very walkable with a handful of museums and sights - and of course shopping, as Curaçao is a frequent cruise ship atop. As in Holland, nearly everyone speaks English, so it is a convenient and easy destination for Americans. I think many Dutch also vacation (or live or work here as expats).

I would see evidence of that popularity the next day. Since the Hota Caves are a ten minute walk from the airport, it made sense to begin my sightseeing there. Afterwards, I could pick up my iPad and hopefully hold onto it from this point forward in the trip! Taxis are expensive on the island -the 20-30minute ride to the airport costs $35, flat fee. On the way back, I’d experiment with Curaçao’s bus system, which locals say is not well advertised nor easy to figure out. My short experience is that it operates on what is jokingly called “island time,” which means don’t expect punctuality! Still, if you have time to wait, it is vastly cheaper. 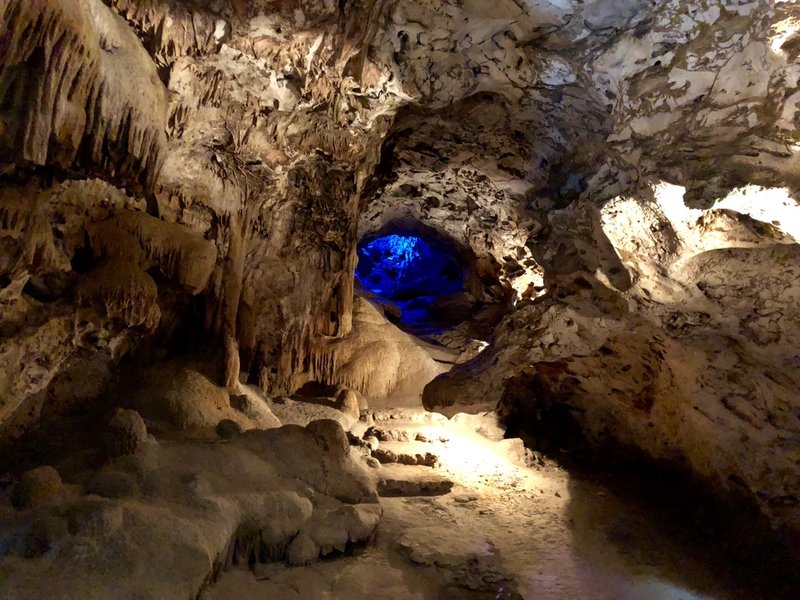 I timed it right for the every hour on the hour cave tour. About 15 people were gathered for the English language tour, while there was a half-dozen for the Dutch one. The Caves were interesting, but certainly not spectacular. The no photography prohibition was annoying, and I snapped a few surreptitious shots with my iPhone. The guide’s jokes caused the cruise ship crowd to chortle, but seemed a little tired to me. It was cool when they flicked out the artificial lighting and let us see how truly pitch black it was that deep inside the Caves. Apparently, they were used as a hideout for runaway slaves until the Dutch caught on and barred the entrance. No Arawak Indian paintings or petroglyphs have been found inside the Caves, but carvings are on display outside the Caves down a signposted trail. They are very hard to detect or spot, and are not very interesting. 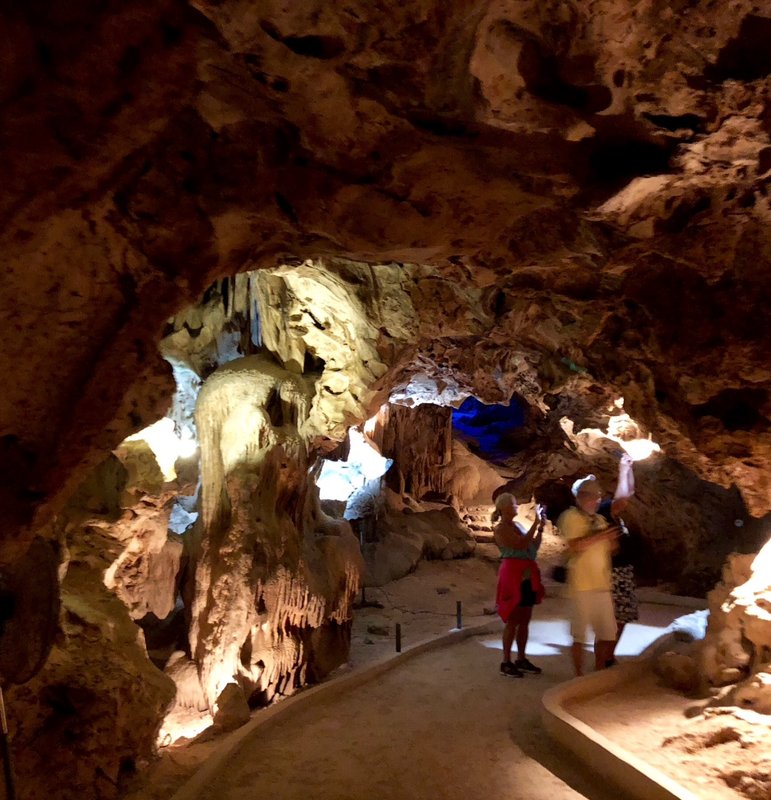 Tourist can visit the Caves only by guided tour, but don’t need to book in advance

Upon returning to Willemstad, I picked up a SIM card for my phone because they are very useful for navigating a new country. After a late lunch, I explored the area around the Wilhelmina Bridge, where the bus had dropped me off. The waterfront was even more scenic with the late afternoon sun gleaming on the brightly colored buildings. I saw a tugboat pulling in an ocean-going freighter, and the bridge subsequently swinging closed. Lots of shoppers and tourists were out walking around. There were plenty of souvenir shops and booths all around downtown Willemstad to tempt them to spend their dollars or guilders. 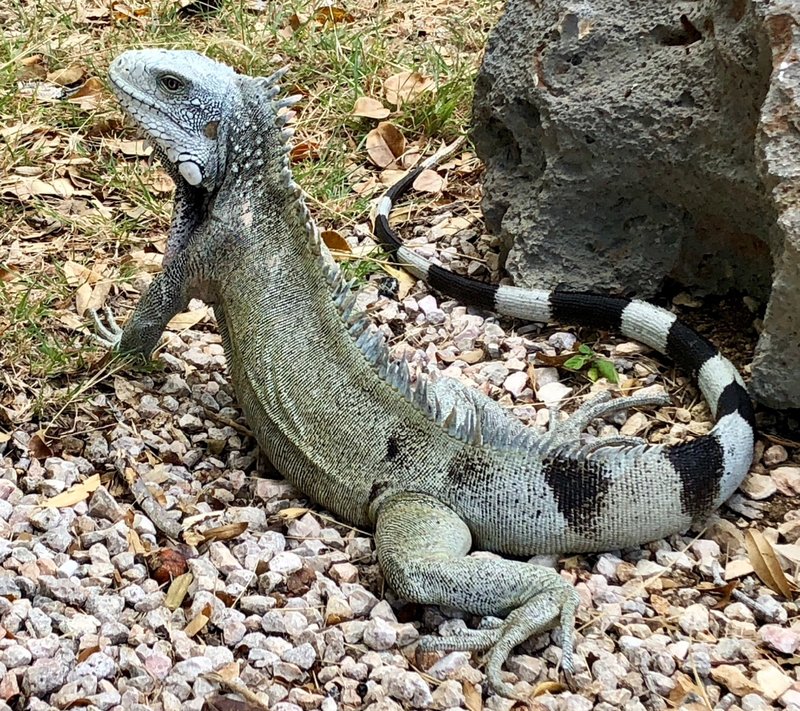 This gentleman was happy to pose for me outside the Caves

It was hot (83 degrees), and I felt it was time for a break. I headed back poolside to relax and cool off. I would have to figure out where to go for dinner eventually. There’s nothing wrong with a little relaxation, and besides, tomorrow would be a full day. 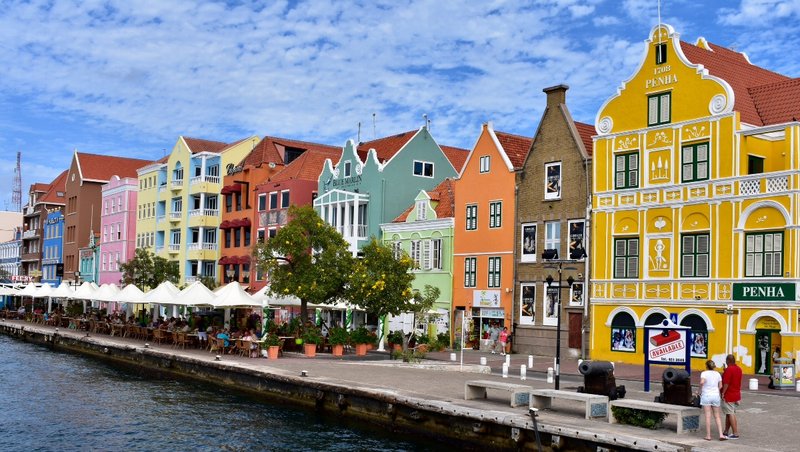 Posted by world_wide_mike 14:36 Archived in Curaçao