Snorkeling a Shipwreck on Curaçao 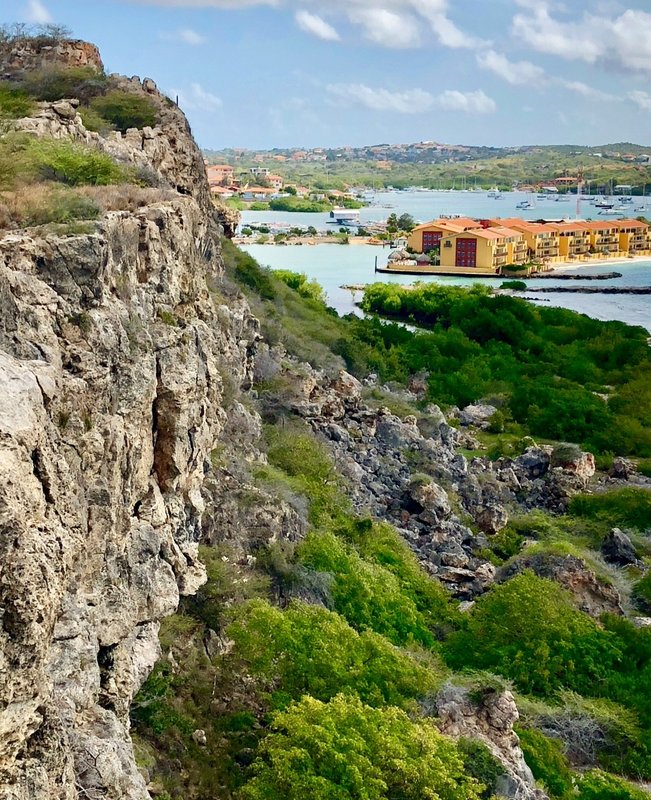 Curaçao’s coastline contains a bounty of snorkeling and dive spots

Curaçao is popular as a diving and snorkeling destination. While researching where to snorkel, I read about Tugboat. It is the sunken remains of a tugboat that sank more than 50 Years ago, and has been encrusted with coral and is a popular hangout for sea life. The pictures I’d seen were really cool - you can easily see the outline of the wreck and various rusted features of the boat. I have always thought it’d be cool to dive sunken World War II ships, but since I never learned to scuba, I have never had a chance. Here was a wreck in shallow enough water that snorkelers could experience it.

Our first snorkeling stop was off of a calm beach

I had my hotel contact the company I’d picked out and book it. They would be coming by after breakfast, and the trip would last four-plus hours. It included two snorkeling stops and a visit to a colonial era fort. Unlike other snorkeling excursions I’d been on, this on was not by boat. Both spots are very close to the shore, and we traveled by van. Our guide arrived only a few minutes late, and we made one more stop to get pick up more participants. Half of those on the tour were from a cruise ship which had docked early that morning. The company provided all the equipment and had two guides in the water with us at all times. 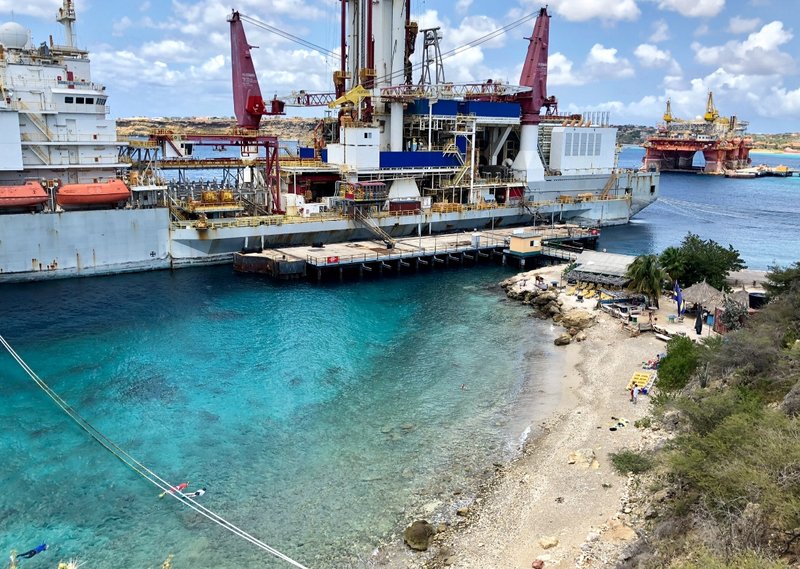 Not the landscape you expect for an amazing snorkeling experience!

I don’t consider myself an experienced snorkeler by any stretch of the imagination. I have found that key thing for me is to remain calm, and not panic. I am a more than a little bit paranoid in the ocean - I have “sharkaphobia,” or whatever the technical term for that is! The more nervous I get the more my mask tends to fog up, making me stress even more. The company had an interesting innovation to cut down on mask fogging: baby shampoo. The guide smeared the inside and outside lens pieces with baby shampoo. You rinse it off right as you get in the water and it cuts down on fogging up. It worked like a charm for me. 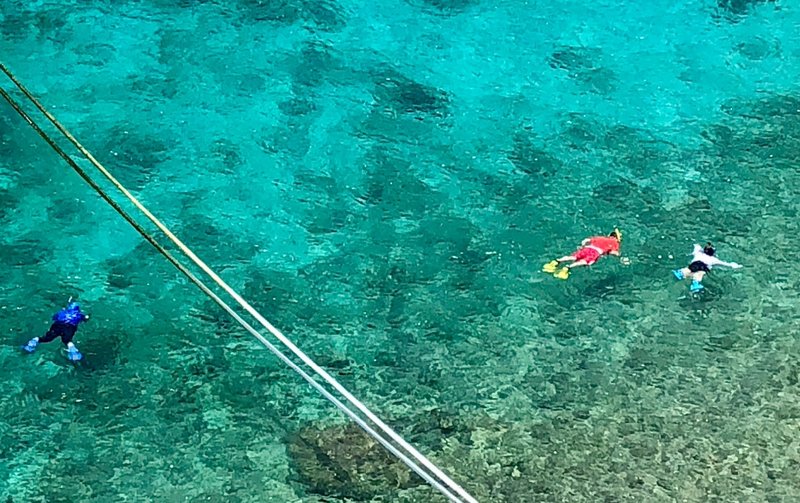 The first stop was at a section of coral maybe 30 yards offshore. The water was very clear and a nice temperature - chilly when you first get in, but fine after a minute or so. There were 5-10yards of rocks at the waterline, but once you got past that, it was a sandy ocean bottom. Lots of various colored fish clustered around the massive growths of brain coral, and other types that I don’t know the name of! Most of the fish were about the size of your hand or smaller, through there were a few brightly-colored wrasse (I believe), patrolling among the coral outcrops. I was pleased to find that I was able to remain calm and float above, around, and in between the outcrops. Previous snorkeling trips, I have to admit, would often see me glancing around nervously, expecting to see a shark looming out of the blue gloom. I was even able to violate my “never alone” rule and explored the coral and schools of fish without the safety blanket of somebody all but tethered nearby. 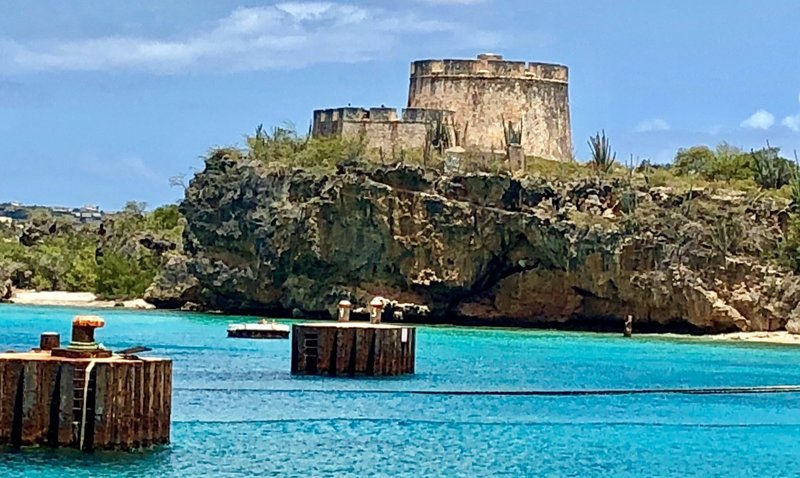 The next stop was the famous Tugboat, and I was surprised to see scuba divers gearing up in the parking lot, too. I have seen too many Jaws movies to probably ever try it, but the documentaries do make it look fascinating. It made me happy to think that, with the whole of Curaçao’s coastline open to scuba divers, Tugboat was considered interesting enough for them to dive this site. It was further out, our guides warned, and there would be more current. I resolved to stick close to the guides on the swim out to and back from the wreck (maybe a little less than 100 yards). I was proud of how I kept calm and never felt the “where’s the shark?” panic begin to rise. I focused on keeping sight of the guide and swimming and paddling with my flippers. I saw two returning scuba divers beneath me just before we arrived at the wreck. I realized it was the first time I’d ever seen someone scuba diving in the ocean with my own eyes. They looked bigger than I expected, strangely enough. 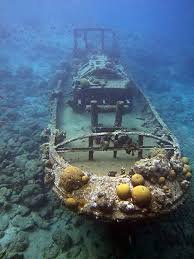 NOT MY PHOTO! Internet image of Tugboat (I did not have an underwater camera

And there it was! Just like the pictures I’d seen on the internet - the rusted brown remains of the tugboat, clearly recognizable. It was encrusted with coral, and you could seee schools of brightly-colored fish all around and inside the wreck. Fields of brain coral, sea cucumbers, sea ferns, and other plant and marine life surrounded the tugboat. I floated above it, starting at the stern and exploring its entire outline in a slow loop. The superstructure of the boat was maybe 10 feet beneath me. I swam through clouds of fish, holding my hands out for them to cluster around me, and they even bumped into my fingers, hoping for handouts. This was amazing, I thought! Larger, solitary fish fed on the bottom, while the smaller schools swam together protectively. I even noticed schools hanging out near me, adopting me as a big brother. 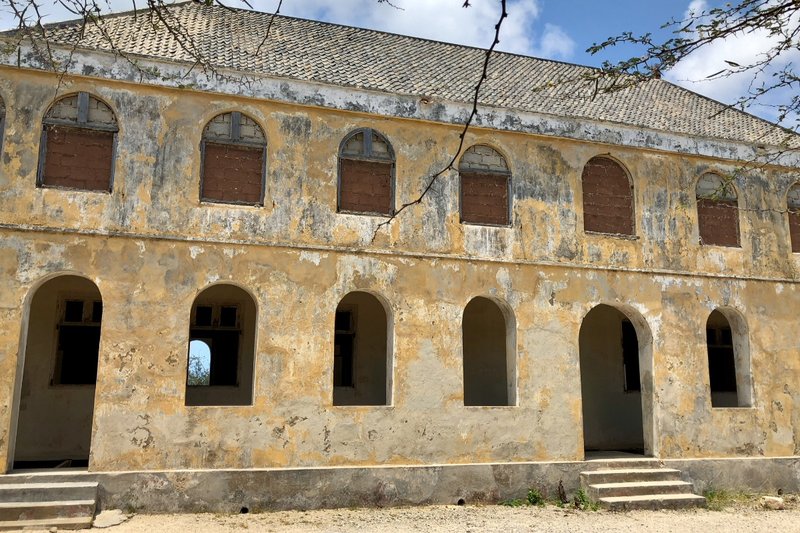 The ruined quarantine ward not far from our snorkeling spots

One of the highlights was the foot-long octopus that scurried across the bow of the ship, then wedged himself away in a coral outcrop. My favorite fish were the school of deep purple colored ones that gracefully changed directions as one. I don’t know my fish breeds that well, so can’t rattle off the types that I saw. However, it was definitely the coolest snorkeling experience I have ever had. I could feel the current, but it never made me nervous. I was so focused on circling and exploring the wreck and watching - and swimming among - the fish that I never had a chance to let my imagination runaway with me. 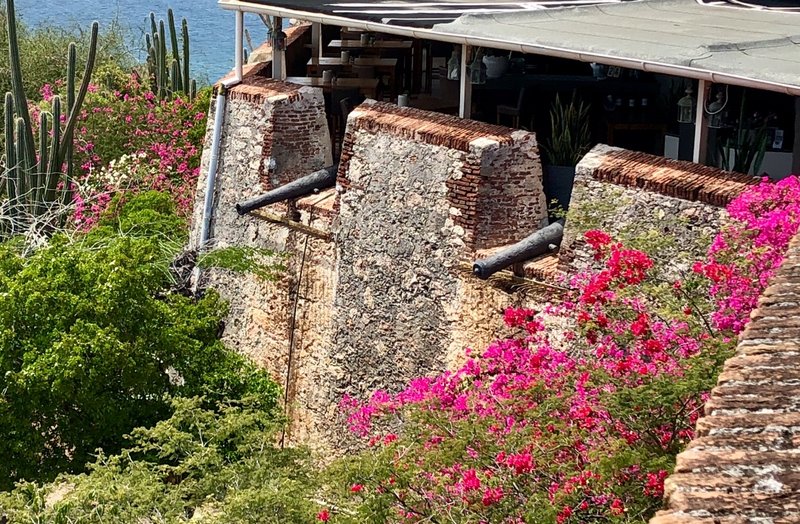 Fort Nassau, which we did visit, overlooks Willemstad’s harbor

One of the oddities of snorkeling Tugboat is the industrial look to the area. Ther are two oil rigs right off the rocky shore. Neither appear to be in operation anymore, but it is not what you expect to see as you snorkel turquoise Caribbean waters! On a headland overlooking the cove is colonial era Fort Beekenberg. It’s ruined round ramparts gleam ruddy in the afternoon sun, providing yet more man-made contrast to the underwater nature scenery. The tour reviews I’d read said we visit the fort, but oddly, we drove right by it to visit the ruined husk of colonial era quarantine ward for sailors carrying contagious diseases. And after that, we did stop by hilltop Fort Nassau, which has a 360-degree view of Willemstad and its expansive harbor. 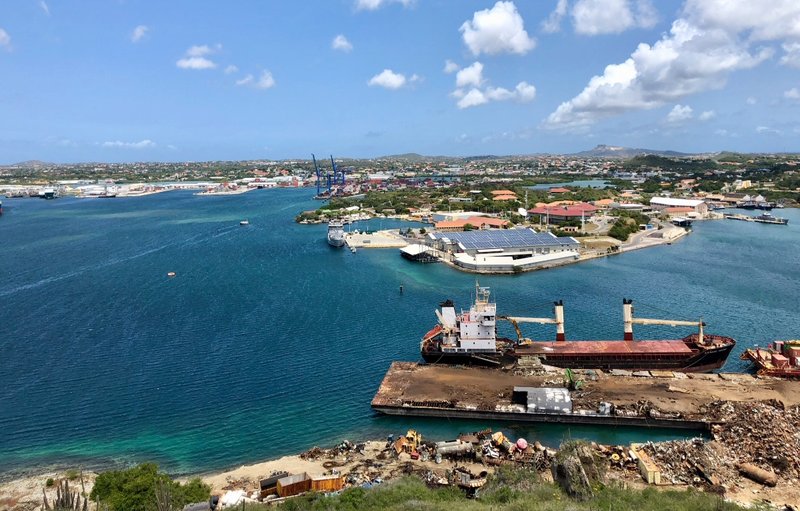 One of the caveats about Curaçao is how industry intrudes on idyllic landscapes. Curaçao’s oil refinery is a sprawling eyesore. Also, we were told it’s harbor is in the top seven of the world’s natural, deep-water harbors, and it is lined with industry. This is no quaint, traditional island of grass hits and palm trees. Instead, it is a prosperous working island whose perfect temperatures and dependable sunshine tempt visitors to its shores from around the world. And on this day’s sightseeing, I saw that it’s environment beneath the seas is equally tempting. 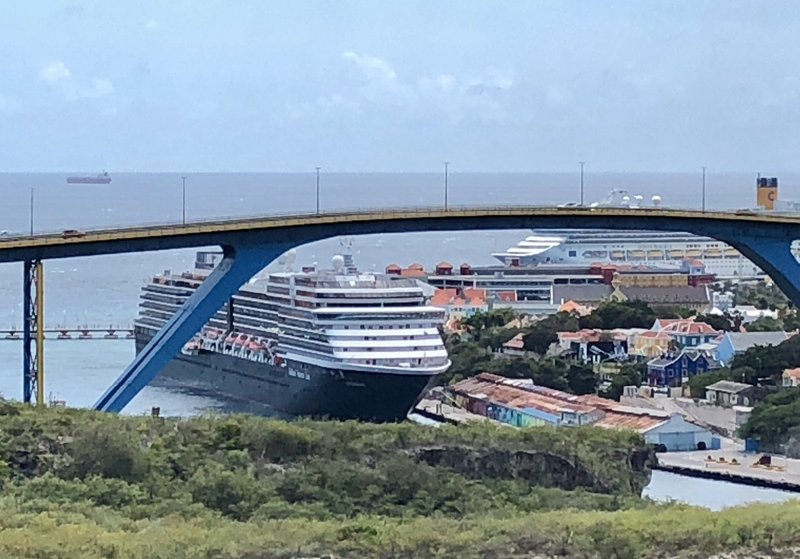 Despite its industry, Curaçao’s natural beauty and climate beckons visitors from around the world

Posted by world_wide_mike 14:02 Archived in Curaçao