Allowing myself to slow down in Curaçao 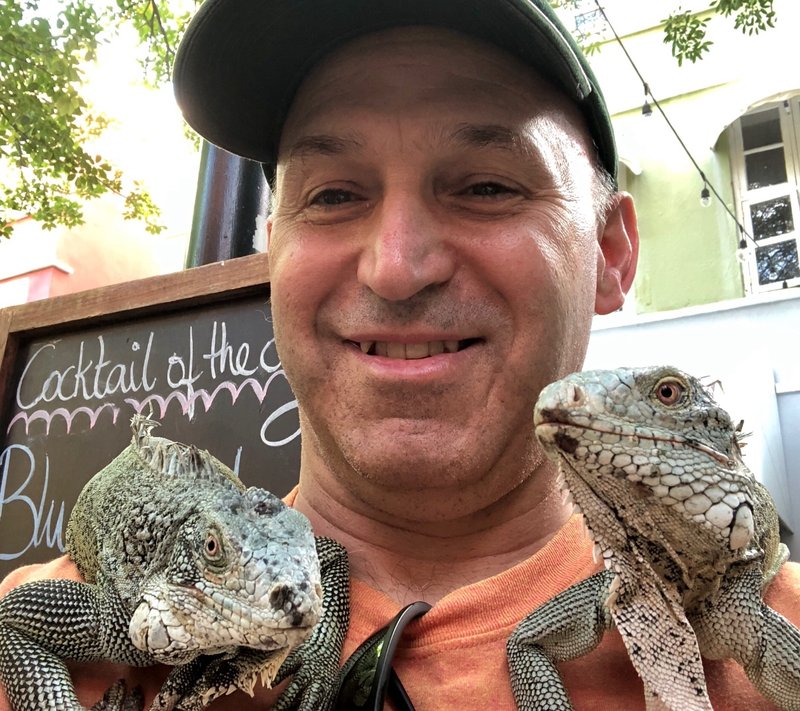 Say hello to my little friends!

One of my plans for this trip was to not be as go-go-go as I normally am on overseas adventures. The last six weeks have been a bit rough, and I needed the relaxation time, too. So, following the awesome snorkeling excursion, Monday and Tuesday in Curaçao were fairly relaxed. There was a lot of wandering around Willemstad, searching out interesting historical sights and museums, as well as plenty of strolling through shops to see if anything caught my eye. After meeting the Iguana Brothers at Hato Caves, I was tempted by a really cool, green, iguana t-shirt. And wouldn’t you know it? A guy carrying around two take iguanas and getting tourists to pose for pictures with them came along within an hour. 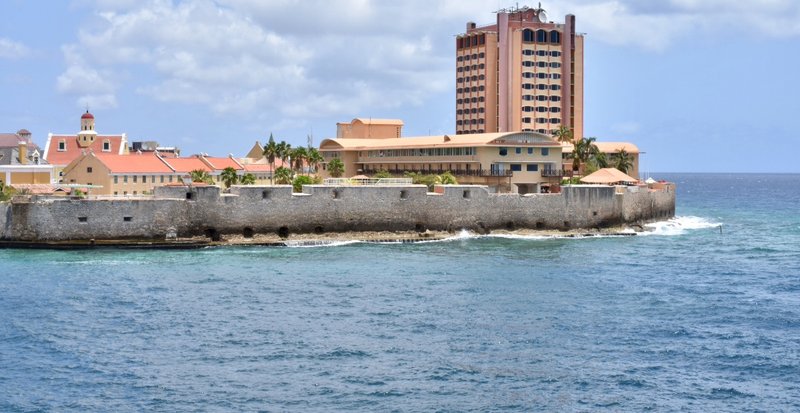 On the historical side, neither of the forts guarding Willemstad’s harbor are very interesting. Fort Amsterdam is now the government’s offices. The former barracks are spiffed up and the whole thing gleams with fresh paint. There is a historic church inside you can visit, but at $10 and with so-so reviews, I passed. The battery’s sea wall looks historic in its golden-colored stone shining in the sunlight and fresh ocean spray, but other than that it’s is fairly ho-hum. On the opposite shore, the Rif Fort has been converted into a modern shopping mall. It also has its historic sea wall protecting its battery, but inside is a slice of modern suburbia. How it attained UNESCO World Heritage site status is a mystery to me! 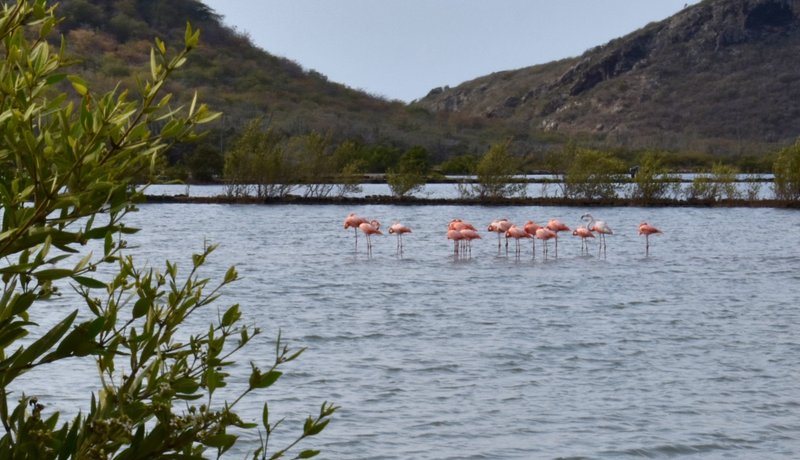 Flamingos in the Curaçao countryside

One cool little side trip out of town was to see salt flats about a half hour away that are home to pink flamingos. I’ve seen them at the zoo, of course, but it was neat to see a wild flock. The best part was when a half-dozen that we’re in a different section suddenly took off and circled the water, landing next to the rest of their community. I had just put my camera away to pull out my iPhone, when the movement occurred. feature you see a half-second of video. I regretted deciding NOT to bring my new camera’s zoom lens. I haven bought a new camera bag and really didn’t have room for it. While waiting for the bus back to town, I talked to an elderly local, asking if he knew bus times. When his wife drove up, she generously gave me a ride back to Willemstad. It certainly helps being friendly with the locals! 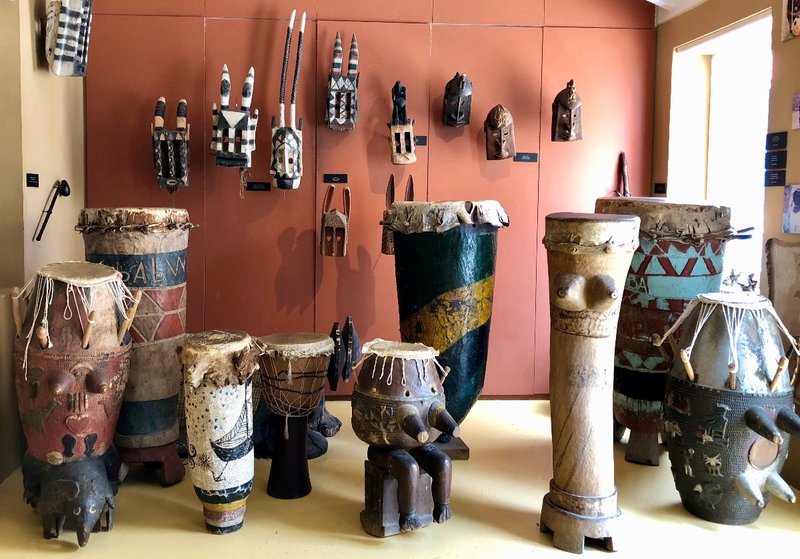 West African masks and drums at the Hura Hulanda Museum

One unexpected discovery was the Kura Hulanda slavery museum in Willemstad. I was certainly not expecting the sprawling, world-class sight that it is. The breadth of excellently displayed items is amazing: Sumerian cuneiform tablets; Bronze Age weapons, pottery, and metalwork; Islamic artifacts like the doors from the Sankore Mosque in Timbuktu; cast bronze statues from Benin; wooden and fabric African masks and statues; and so much more! The first-hand writings and pictures detailing the slavery experience in Curaçao (and the world) was intense and fascinating, yet repelling. Many artifacts were displayed - chains, shackles, uniforms, weapons, period paintings and drawings - all brought home man’s inhumanity to man in graphic detail. I really liked how the exhibits detailed its lesson while celebrating the cultural achievements of people involved in the experience at the same time. There was even the front page of a newspaper from Springfield, Ohio, talking about African-Americans struggles for rights in post-Civil War United States! 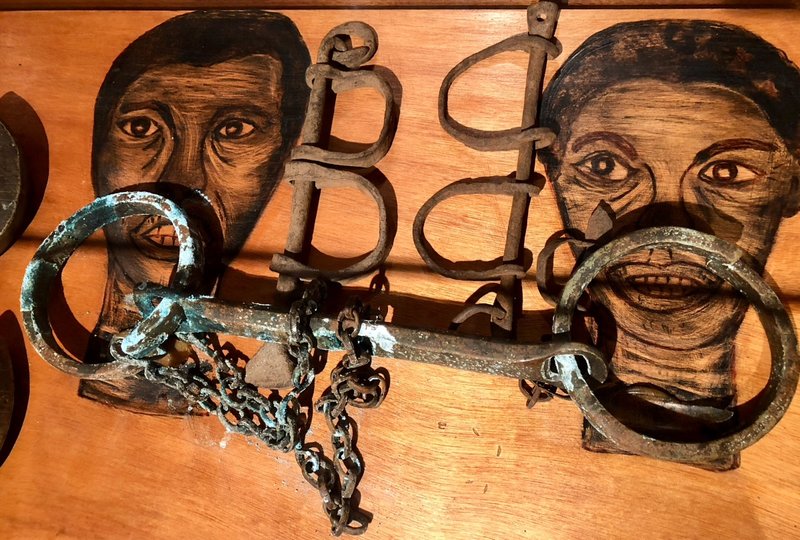 Artifacts from Curaçao’s slavery past are touchingly displayed

I spent more than an hour exploring every room of the sprawling Kura Hulanda. For a History buff like me, this was a great find. I really liked how it told the story of everyone involved in a detailed, non-preaching way. The museum let the facts and exhibits speak for themselves. It was the perfect example of how to show something, rather than tell. 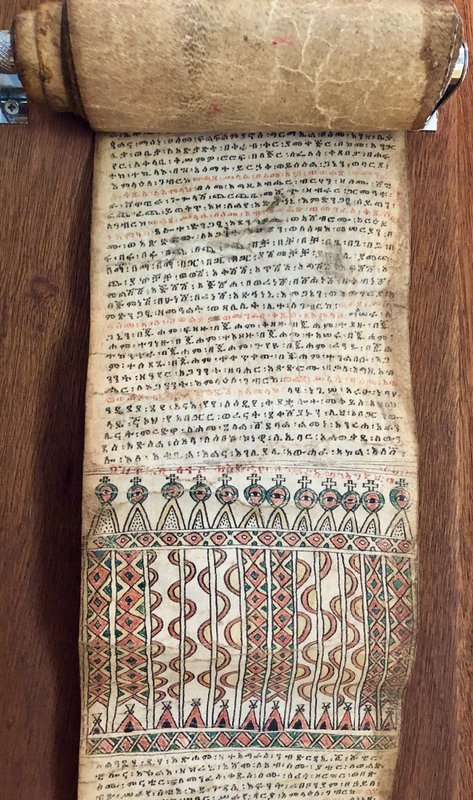 After visiting a tasty local barbecue spot for lunch, I went back to my hotel for a quick nap. A post-nap visit to the Maritime Museum couldn’t hope to compare with the Kura Hulanda. Definitely a place visitors could skip. I also checked out a local art gallery, relaxed in a breezy square, and generally enjoyed a coup lazy days. I have more exiting things on tap - kayaking, hiking, and swimming with sea turtles. These last couple days were a chance to wind down from a hectic and stressful end to Winiter. My goal of having some down time was achieved, and it was a pleasant two days. 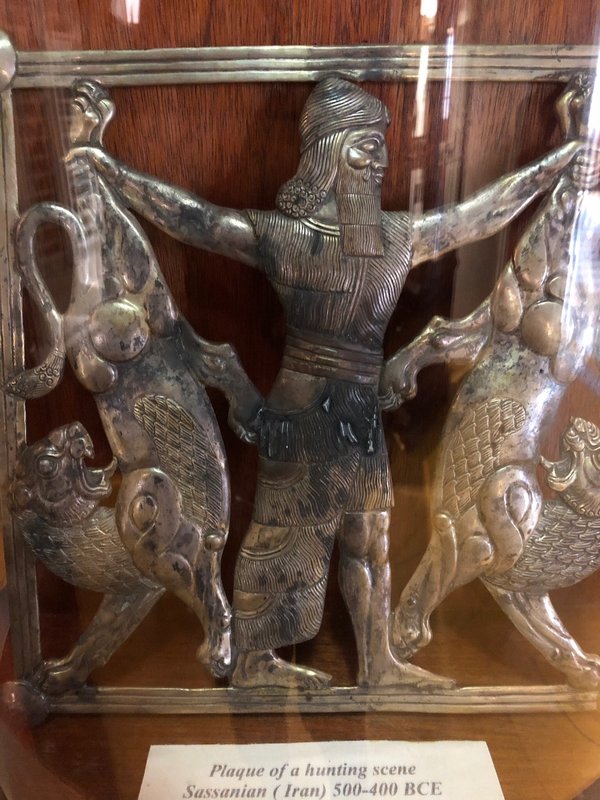 Posted by world_wide_mike 14:14 Archived in Curaçao