In Search of Flippy the Sea Turtle 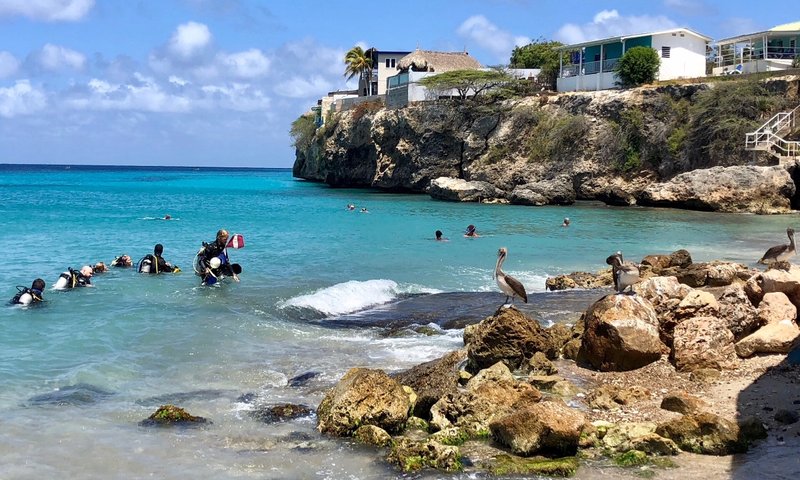 It was a no-brainer to book another snorkeling trip on Curaçao. I had seen two of my top three sights I’d wanted to see (Tugboat, Blue Room), so I searched the web for an outfitter who could nail number three for me. I wanted to visit Playa Piskado, in hopes of swimming with sea turtles. This is no aquarium experience, but a beach where sea turtles frequently swim offshore. I booked Yellow Adventures to take me there (no guarantee of turtles appearing). Would Flippy appear? That was the question. Oh, Flippy is a reference to an imaginary sea turtle dreamed up by some of my Model United Nations students to illustrate their resolution. 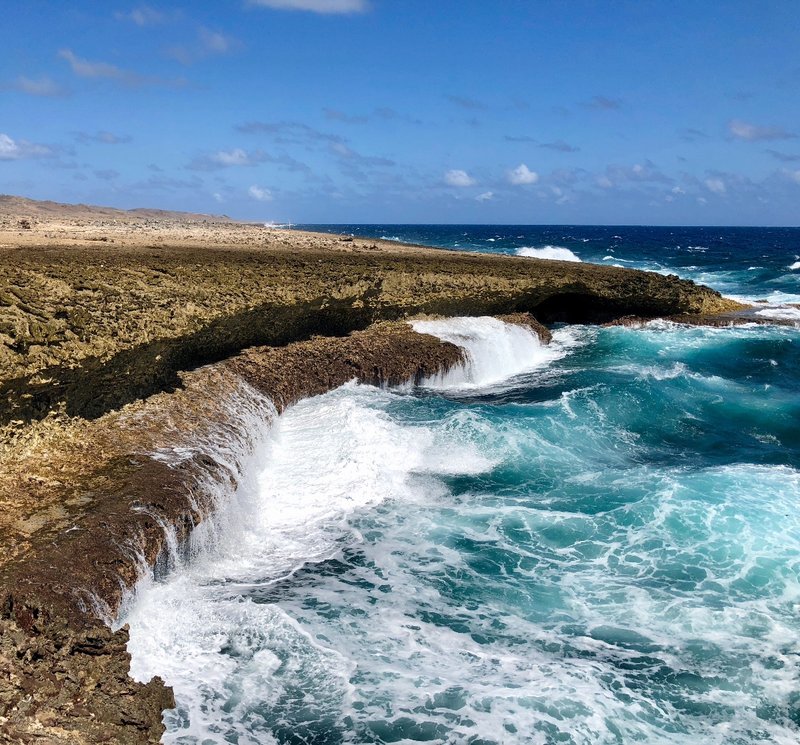 I was picked up at 8:45 am and whisked off to the Hilton, where Yellow Adventures has their desk. The eight of us who’d signed up checked out snorkel equipment, paid our fees, signed our waivers (in case Flippy was in a surly mood?),and were off to our first stop. Twenty plus minutes of bouncing around in the back of a tricked up pickup truck and we arrived at Shete Boka National Park. It is known for its gorgeous sea views, and we hiked to a couple of overlooks to watch the deep blue sea crashing against the rocky north coast of Curaçao. I had fun trying to time my camera shots with the explosions of spray which greeted the bigger waves smashing into the shore. I love rocky coastlines - one of my favorite trips was hiking England’s Cornish Coastal Path. 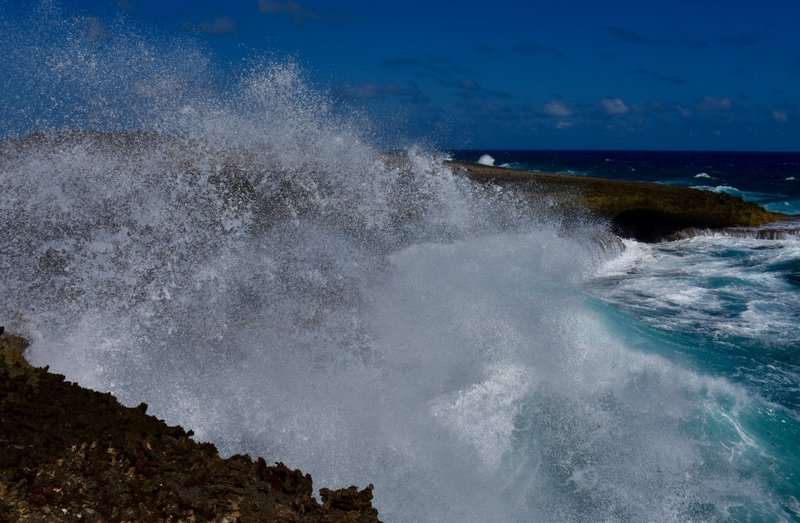 Catching the explosion of spray as wave meets rocky shore

Next up was the main event: Playa Piskado. Would Flippy appear? Or would my $89 be all but wasted? Much to my surprise, our guide informed us she would not be accompanying us into the water. I asked her which was the best place to see the turtles, and she gave us some tips. We grabbed our snorkel gear and walked to the beach from the parking lot. As we’d pulled in, I had seen scuba divers gearing up. I remarked to the young Dutch couple in our group that I considered that a good sign. With the multitude of sites that scuba divers can access, to see them going to one that snorkelers could get to meant it must be pretty good. I put on my fins and waddled awkwardly into the surf, stumbling where the rocks and sand drop off steeply. Not 100% sure where to go, I decided to follow the scuba divers. The water was fairly murky because of the surf near the shore and the sand on the bottom stirred up by the scuba divers. As we got further out, it cleared noticeably. 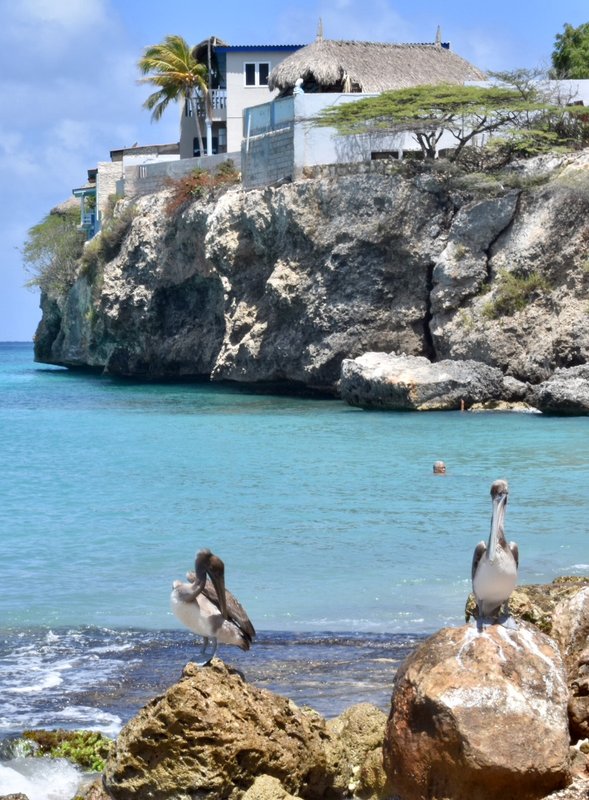 Eventually, I decided to push ahead of the scuba divers as they were moving so slowly, I felt. I paddled my flippers into the blue gloom of the water. I saw very few fish, instead noticing the ocean floor littered with anchors, rope, occasional coral, and sea weed. As I ventured further out, I chuckled to myself. Here was Mr. Sharkaphobia leading the charge ahead of everyone. Just to be safe, I made a 90 degree left turn and swam parallel to the shore. I swiveled my head constantly, looking for Flippy (or you-know-what, which I tried to keep out of my mind. My mask was clear and my breathing good - no leakage or fogging. Ahead of me, I saw a shape headed directly towards me. Could it be? YES! Flippy!!! 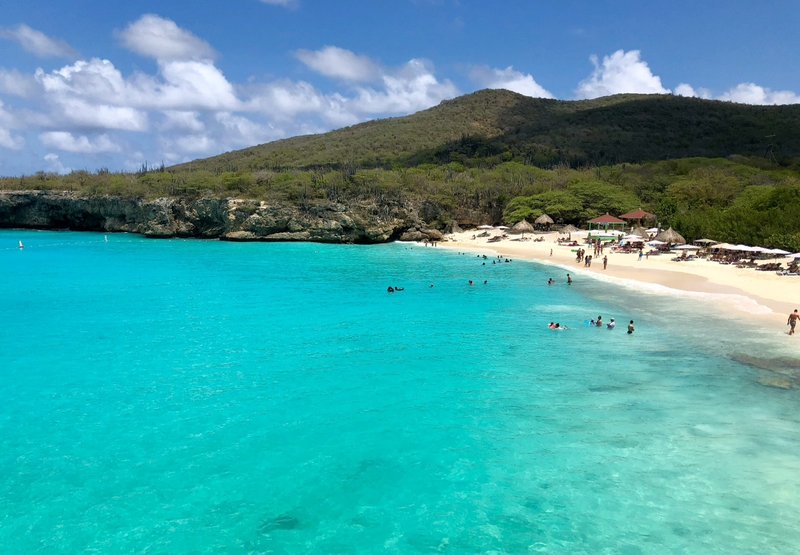 Playa Knip -home to the bluest water I saw on Curaçao

He wasn’t the biggest guy - maybe a foot and a half to two feet long. He swam right by me, so I changed directions and followed. We swam together for 15 minutes. We were told not to touch the turtles. So, I remained motionless whenever he got close. Once he swam within a foot of me, his dark eyes looking into mine. He surfaced every few minutes or so to take a breath of air. It was so cool to see him gliding along. Suddenly, I caught sight of movement on the ocean floor. A massive sea turtle was rising towards the surface. I abandoned Flippy to follow his grandpa for awhile. After Gramps disappeared into the gloom, I headed back towards the beach. As I passed the pier, I ran into a number of sea turtles feeding. I ended up losing count of how many turtles I saw. Truly, a moving experience, though I was saddened by the amount of trash I saw in the water. I thought back to my students’ cause, which was cleaning the oceans of garbage that turtles and other marine life ingest accidentally, often leading to them choking and dying. I would hate to think of my real Flippy or his Grandpa dying from eating plastic or some other human trash. 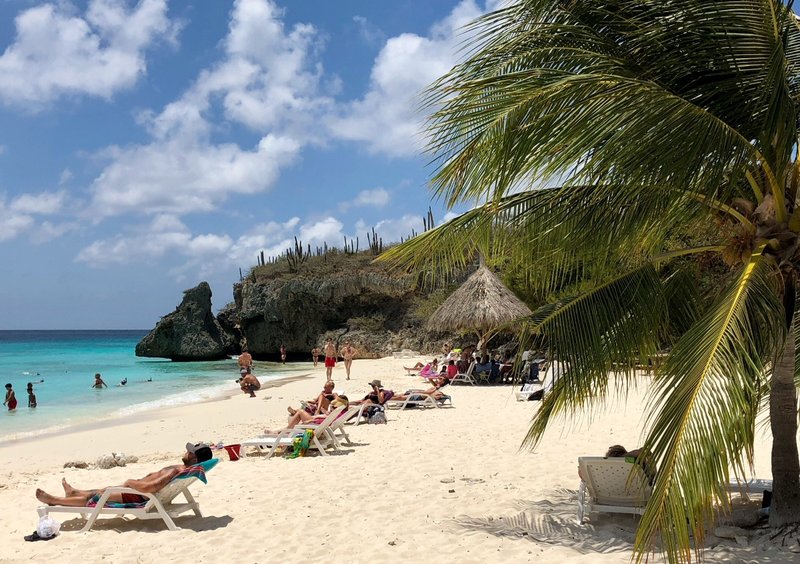 My first real relaxing at the beach in Curaçao

Our next stop (as if we truly needed one after that experience!), was at Playa Knip. The Dutch couple had been there earlier in their trip and said the water was amazingly blue. Sure enough, one look at the beach made you want to run full speed and dive into its aquamarine, gemlike waters. It was definitely the most beautiful beach I had seen in Curaçao. If I ever come back, I WILL swim there! 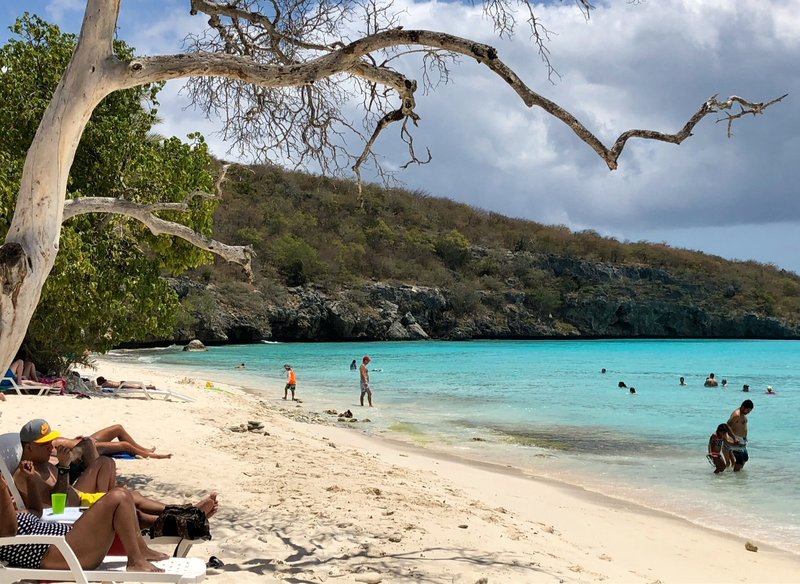 Although I haven’t talked about the, much, Curaçao DOES have beautiful beaches!

Our final stop was for lunch and swimming at Playa Portomari. This was another stunning Curaçao beach. In the end, I was very happy we stopped there. As surprising as it may seem, I had yet to “hit the beach”on this trip, yet. The sand was white and soft, the water was a gorgeous pale blue, and the vibe was as relaxed as you can imagine. It was a perfect way to end the day - reclining on a beach chair, soaking up the sun, and looking around at the amazing scenery. Although Flippy and his family made my day, this was the perfect end to the afternoon. Truly, today had been a no-brained, and I was glad I’d booked this trip! 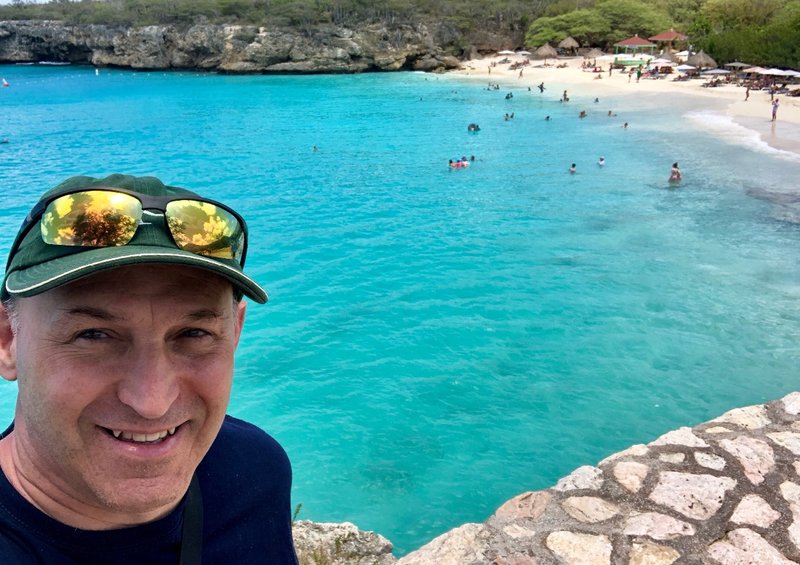 A happy me after swimming with Flippy

Posted by world_wide_mike 19:42 Archived in Curaçao