I’ve Been to the Mountain 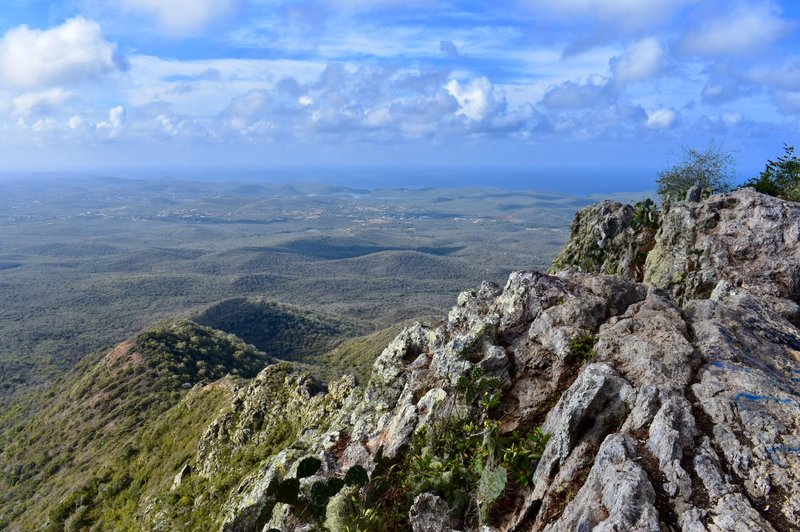 The view from atop Mt. Christoffel

So the first sight that I planned to see in Curaçao was actually the last one I visited. Back when I was first deciding whether to go to Curaçao or not, reading about the hiking in Christoffel National Park tipped the scale from “undecided” to “sure, let’s do it!” Most visitors to the park climb the 1,220-foot peak. Of course, the height prompts banter that it is a hill - not a Mountain. Well, the fact that they don’t let you start the ascent after 10am because of the heat and steepness of the trail tells you it can be grueling. This meant my alarm was set for its earliest time this vacation (5:30am), so that I could make the drive there and get there in the first hour after the visitors center opened at 6 am. 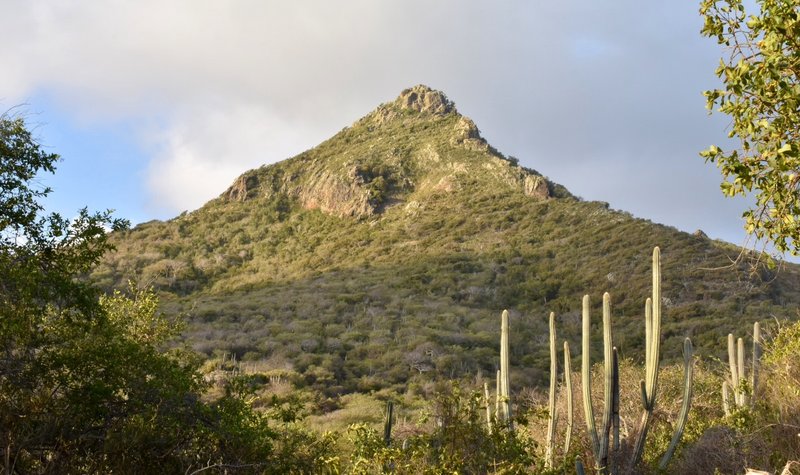 The steep peak of Christoffel gleaming in the morning sun

All the reviews and reports that I had read said it should take you about an hour each way. Some said it was more like an hour and a half, so naturally I was interested to see how I stacked up against the average climber. I was wearing my closed-toe, hiking sandals, and had two water bottles in the pockets of my cargo shorts. I carried my camera bag, not a backpack, so I wasn’t equipped for speed. And no, I am not making excuses already...! 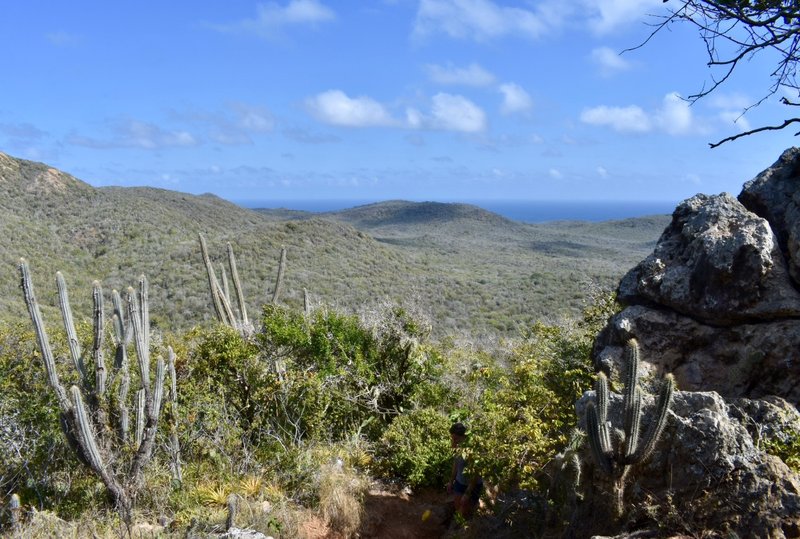 The Viaitors Centre and the road to the trailhead were easy to find. I would discover the trail up the Mountain was equally easy to follow. Bright yellow blazes, or dabs of spray paint in the shape of arrows or markings on rocks, roots, or branches meant that I never strayed from the trail once. The hiking started out fairly easy, and it was shady and, if not cool, at least not hot in the morning sun. As you ascended, though, it became more difficult. I had to be careful where I put my feet and how I braved myself as I leveraged my way up tight spots. It was a beautiful morning, though, and I felt like I was making good time. The view was nice and continued to get better and better as I made my way up. I did not snap so many pictures going up as the lighting wasn’t the best. When I reached a large rock spray painted “Half”, I looked at my watch. I gave myself a thumbs up - 30 minutes exactly. 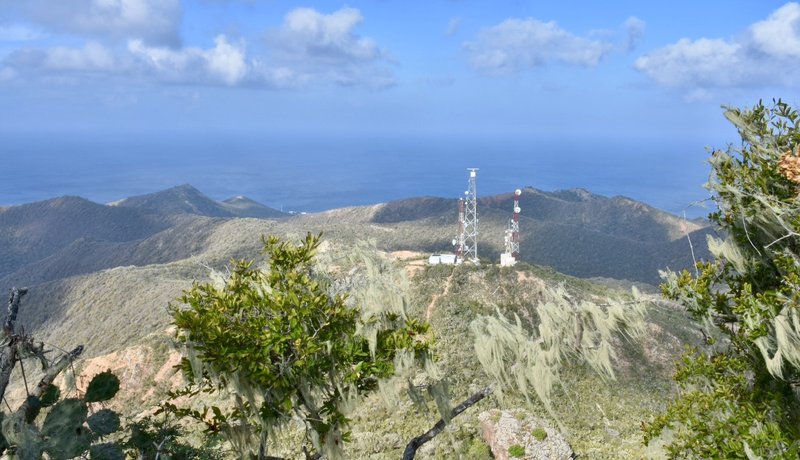 As you spit the TV/Radio toowers you’re almost there!

Navigating the pathway after that, though, changed from “where do I place my foot?” to “What do I hold onto to pull myself up that boulder?” I saw my first group going down shortly after. The third person had a leg that was pretty scraped up, so I felt good that I hadn’t had any troubles. Any pathway disappeared as I got to the top and it simply became a job of clambering across boulders, working your way ever upward and closer to the peak. The yellow arrows gave good suggestions where to pick your way upwards. Soon, I was there, and I could hear the ten or so hikers already there talking and laughing. I looked at my watch: 1 hour, ten minutes. What made that feel worse, though, was the family with this - I kid you not because I asked - 3-year old coming down as I reached the summit. Sigh. At 55, have I truly lost that ,any steps?

Me atop Mt. Christoffel

The view from atop Christoffel was fantastic. There was no real flat platform, and being on top meant more clambering around to look at all the different vantage points. I’d read that you could see the entire island from atop, and other than some haze at the opposite Eastern end, I would agree that it is true. I took lots of pictures and breathed it all in. I enjoy hiking and always try to do at least one day hike on all my trips overseas. The top got steadily more crowded as later-starting hikers arrived. After perhaps 45 minutes atop, Christoffel, I began my hike down. I honestly feel clambering over rocks is harder going down than up. And to prove it, I slipped and fell early on my way down. I was stunned for a second, but worked my ankles and legs, discovering I hadn’t done any real damage. My left legs was scraped up a bit, though. I guess that with all the sharp rocks I was lucky to have only a few scrapes from my tumble. I was considerably more careful and slower the rest of the way down. 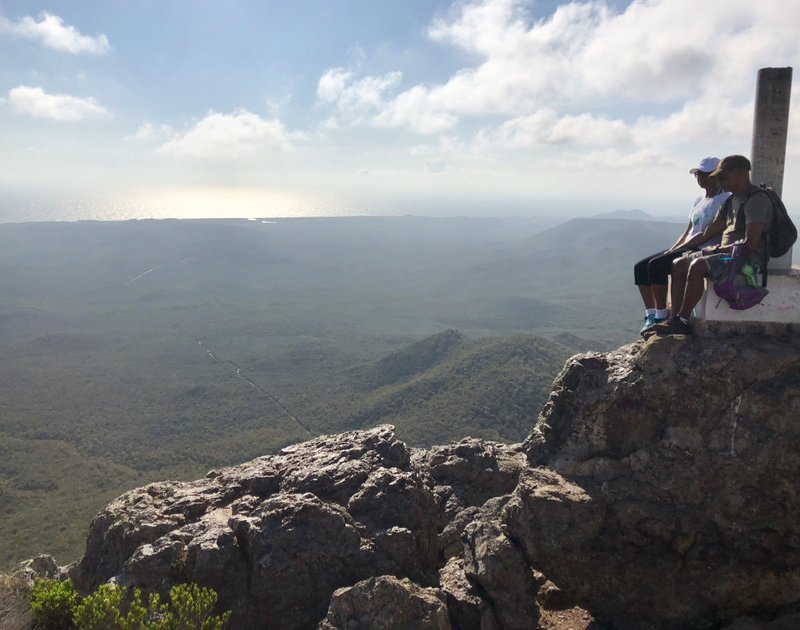 Reading up on Christoffel, It had said there were driving trails (and other hiking trails...um, no thanks!) in the park. These turned out to be a real letdown. The scenery of Christoffel National Park is mainly scrub and thorn brush, with cacti thrown in for good measure. It honestly was not that exciting. The views out to the ocean were okay, and the hike to the Boka Grandi Bay was cool. Watching the deep blue swells of Curaçao’s northern coast crash against to rocks was fun. Of course, I had done that yesterday on my snorkeling expedition, so it did not have the same novelty it might have had otherwise. I would recommend visitors skip the rest of the park’s sights. Come for the climb, then head to a beach to soothe your aching limbs in the sea. There plenty of amazing beaches in the area, and you will enjoy your time there much more than circling around the park’s one lane road staring at the same sun-blasted thorn bushes. 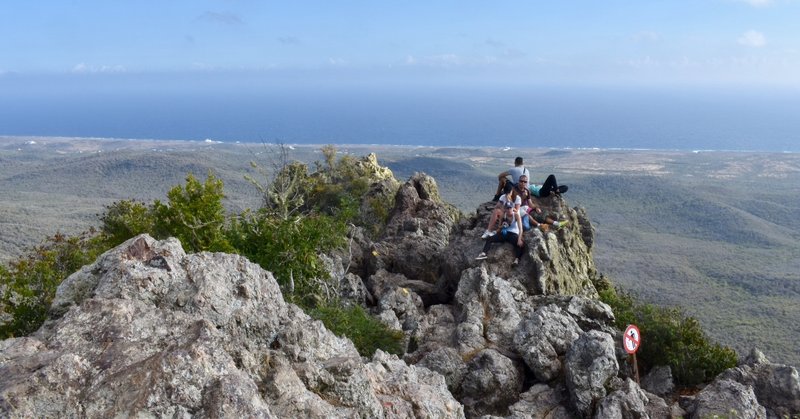 Hikers relax and enjoy the view from atop the mountain

I had climbed the mountain, though, and my body had that satisfied ache you get after a good hike. I could now call my trip to Curaçao quits, now that I had seen the fiat sight I planned. 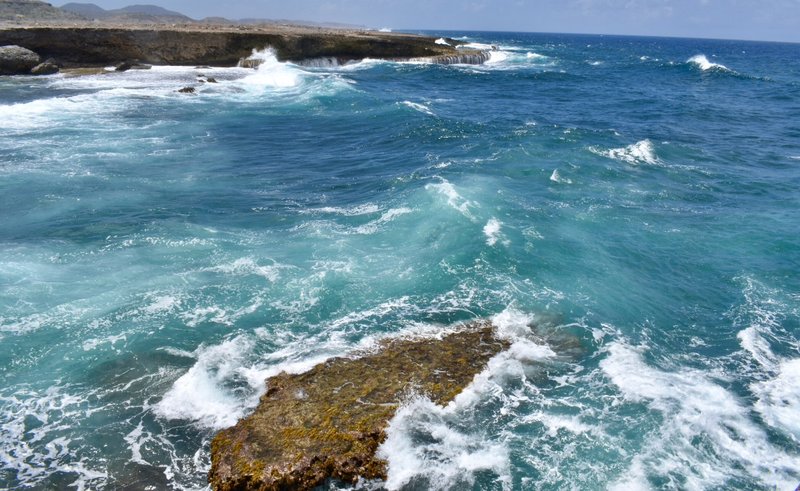 Boka Grandi Bay, the only other really worthwhile sight, in my opinion, in Christoffel National Park

Posted by world_wide_mike 17:05 Archived in Curaçao