Into the Mountain Kingdom

A Day Trip to Lesotho 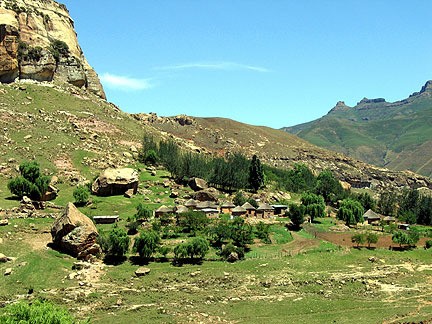 A village in Lesotho - a tiny country completely inside South Africa

The names were evocative: The Mountain Kingdom, nestled behind its Barrier of Spears range of rocky peaks. Lesotho is the mountain shelter of the Basuto people, who used it historically as a fortress to resist the rampaging Zulu kingdom below. Since I was going to be in South Africa for a couple weeks, I wanted to get a glimpse of this little known country and its spectacular scenery.

My original plan was to enter Lesotho through the Sani Pass, home to the "highest pub in Africa" at Sani Top Chalet. However, the public transport connections didn't line up as well as I thought, so I changed plans on the fly and decided to take a one day visit there, sponsored by Amphitheatre Backpackers, where I was staying while visiting the Drakensberg Mountains. They've been running a day excursion to Lesotho for four years through a lesser known pass about an hour's drive away. Although I normally don't take guided tours, I felt the alternative used up too much time to justify the visit. 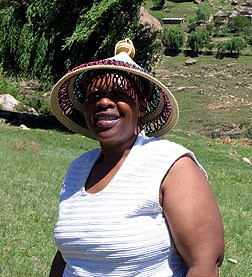 So, on an overcast Spring morning, seven of us piled into a Toyota Condor with our guide and began threading our way though the stark green hills of the Drakensberg Mountains. The bright green hillsides gave way to rocky brown as we turned off of the asphalt road and bounced our way steeply uphill on the gravel track leading to the border. At the top of the pass, the South African border post was quick and efficient, processing the departures of three Dutch, two German, one English and one American travelers. Continuing on, we chuckled as the guide pointed out a windowless trailer as the Lesotho border post. Only a short while later did we realize he wasn't joking -- the abandoned trailer WAS the unmanned post. All along the way up and down, though, we passed people walking to or from the border. South Africa's nearby towns were convenient places to shop or work for the isolated villagers on the Lesotho side.

Since it was Sunday, the usual visit to a village school was off. Our guide stopped in the first village to make a few contacts for stops later in the afternoon, then we drove to another charming village of round huts with thatched roofs, situated partway up a hillside. We parked the Condor and hiked uphill, as the sun broke through the haze and turned it into a gorgeous day. Along the way, we met the school principal in her traditional conical straw hat. She posed for a photo with her village in the background, making me promise to send her a copy. After ducking through a rocky cave, we came to a scenic overlook with the village and its valley spread out below us. Here we opened the boxed lunches Amphitheatre Backpackers had provided us. Our guide explained more of Basuto culture and that of the Bushmen, whose rock paintings we were on our way to see. I shared some of my overfilled box lunch with a couple village boys who'd tagged along behind us -- no one really needs to eat TWO cheese and tomato sandwiches! After lunch in the idyllic spot, we scrambled towards a rocky overhang and the Bushman paintings. The guide explained that archeologists think that the direction figures face in the paintings may function as signs pointing towards where abundant game was, or enemies lurked. The rockface looked featureless until he pointed out the animal outlines and bow armed figures. After that, the paintings and others were much easier to spot. 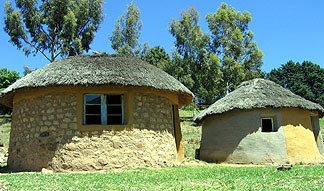 Traditional, round Basuto huts in Lesotho

From the paintings, we hiked along the slope towards a nearby village, then back to the vehicle. We squeezed back inside, then squeezed some more when the guide allowed a village girl to catch a ride to our next stop. We bounced along rocky roads, forded two different streams, and traversed high hillsides with wonderful views. Plenty of folks were out on the road walking or shepherding goats or cattle along it, and each seemed to know our guide personally, greeting him with a laugh or a wave. He pointed out the one modern medical clinic in the area (open only one day a week by visiting nurses and doctors). At all other times, sick or injured villagers had to rely on the sangoma -- the local area healer, who we were on the way to visit.

When we arrived, I was mildly surprised to find the sangoma was a woman -- I'd figured in southern Africa's patriarchal society that position would be for a man only. Her round hut was cool and very dark on the inside. She sat on a mat beneath the one window whose bright sunlight reduced her to a silhouette. Through the guide's translation, she explained the involved process of how she was transformed from an ordinary domestic worker in South Africa to a Basuto sangoma. It'd involved an undiagnosable illness, dreams in which an uncle who was a sangoma explained her calling, and directions for her to follow to receive her training. After we heard her tale, we were encouraged to ask questions, which she answered through him. I was surprised how closely she said she worked with the staff of the modern clinic, referring villagers to them when their injuries were beyond her skill. I don't know why, but I'd expected an animosity or rivalry between the two schools of healing. 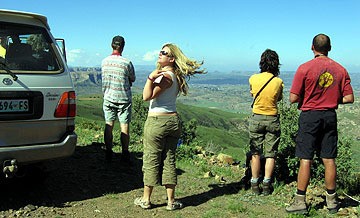 Afterwards, we went for a little Lesotho style medicine ourselves with a visit to a village shebeen, or tavern, where we'd sample local brew and food. The home brewery flew a yellow pennon, which is a way of informing villagers what type of beer it had for sale. There are three types of beer in Lesotho, represented by white, green or yellow flags. The white flag beer is made from grain, such as maize. The green flag beer is made from dagga -- the local marijuana. Some of my fellow travelers seemed disappointed that a green pennon wasn't flying that day! The yellow flag was for a fruit based beer, such as the pineapple beer, which we shared a huge jar of that afternoon. There was a definite sweet taste to it, I thought, though not much of a "carbonated," beer-like texture. It was a lot like a very sweet English cider.

From there, it was time to make our way back to the border before it closed for the night. The people of Lesotho continued to wave and smile at us, bedecked in their mix of traditional or modern clothing. Most of the men wore hats of one style or the other -- some the traditional, conical "Basuto Hat" -- others modern knit caps that were pulled up to give them a peak. Many wore rubber boots, or "Wellingtons," as the British refer to them. I guess they are practical apparel when most roads or tracks cross streams via fords rather than bridges. When we approached the border post, the sun slanting in from the west struck the Drakensberg Mountains into a blaze of color. We stopped to admire the view, then continued on, leaving the mountain kingdom of Lesotho -- and its charming people -- behind us.

Posted by world_wide_mike 19:59 Archived in Lesotho