Along the Rim of an Extinct Volcano 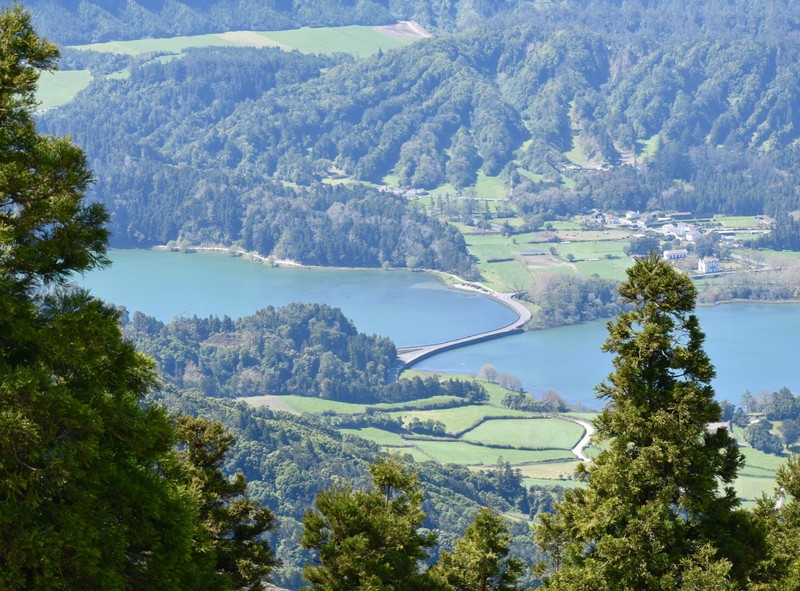 The view from atop the rim of the extinct volcano, looking down at the lakes of Sete Cidades

Today’s hike to Sete Cidades would be the highlight of the tour, I was guessing. This massive volcanic caldera features two lakes , one green and one blue, separated by a tiny sliver of land. There are actually other smaller lakes inside the cone, too, but these two are the image you see on tourism photographs promoting the Azores. You begin the hike in a parking lot and gradually start to the climb. Once atop the caldera, you hike along the rim about halfway around its circle. 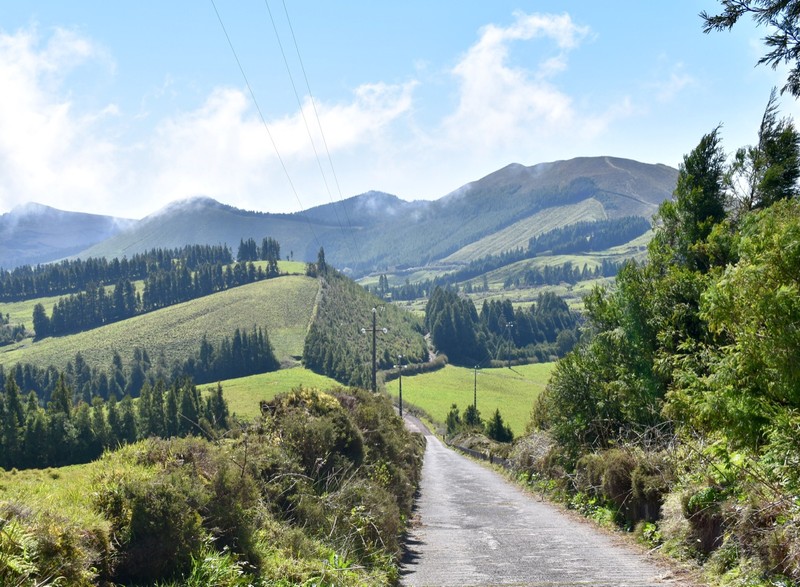 The path is wide for most of its nearly seven miles. Like all the hikes in the Azores, it seems, it is very well maintained and signposted. On this one, though, you can hardly lose your way. You are literally following the rim of the crater. Looking down inside the bowl, you see one beautiful view after another. The town of Sete Cidades is spread along the largest lake, its white houses gleaming in the sun. Farms and forests are also laid out beneath you, curving slowly down to the water’s edge. A beautiful blue sky arched above, with only occasional whisps of white clouds momentarily dimming the sun. 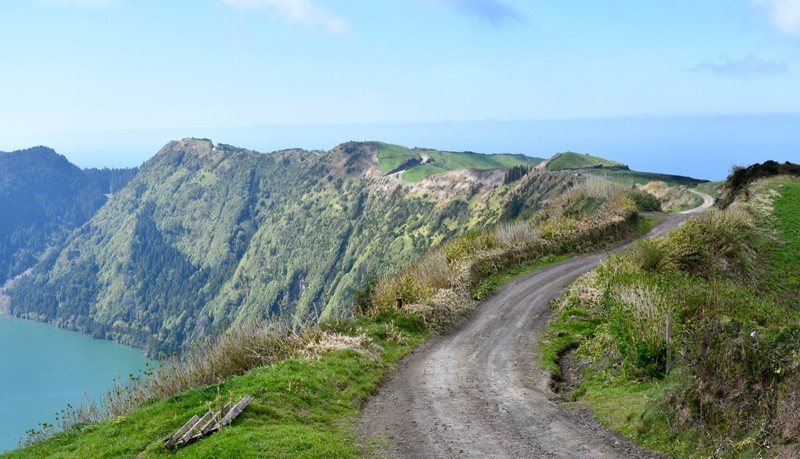 The caldera’s rim looks jagged and steep from a distance, but as you approach each bend, you see its edges have been worn down over the millennia. There are no vertiginous drops to set your heart pounding. The path is so wide that cars can and do drive along its dirt and pebble surface. However, on my trek, perhaps only three to four drove past - so it is not a common thing. I saw far more hikers, but Sete Cidades’ vast length swallows them up, and you mostly have the walk to yourself. 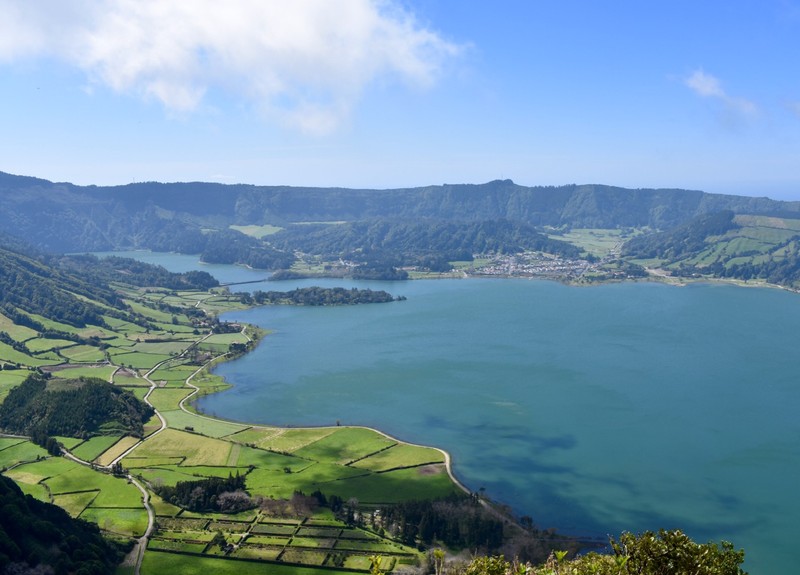 In the caldera’s bowl, farms and pastureland are bordered by dark forests sloping down to the lakeshores

This is one of those hikes where every view seems to be better than the last. I took dozens and dozens of photographs, all the while wondering how I would ever sort through them all. I had saved this hike for the day the weather forecast promised would be the sunniest. The beautiful skies held true, and the gorgeous views followed, one after another. High atop the rim, the wind often whipped at my jacket and hat mightily. All day long, I would pull up the hood of my jacket to secure my hat, and for once stretch, I clipped it to my belt to keep it from flying off. Some parts of the hike were sheltered from the wind, though. Stands of trees would shield the path, or the way itself had worn down into the soft soil deep enough to be recessed and out of the wind. 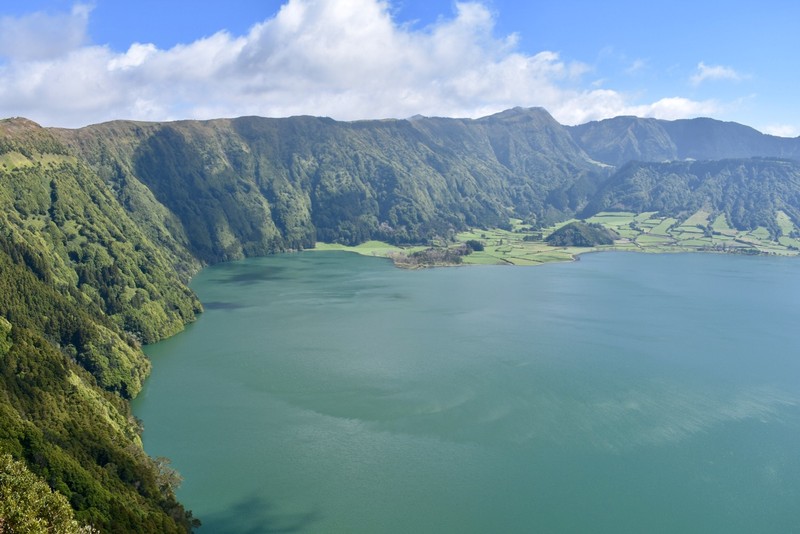 As the steeps sides of the rim tumble down towards the water, they are densely clad in thick, almost jungle-like greenery

The views into the crater were stunning, but the ones looking away from it and down onto the coastal countryside were nice, too. The sea came into view, and the rural landscape of farm, village, and pastureland spread out beneath me. Judging by the number of cows I would see, dairies must be common in the Azores. Surrounded on all sides by the Atlantic Ocean for thousands of miles, the islands must get lots of rain. The greenery is persistent throughout Sao Miguel, providing acres of pastureland. In fact, I saw a lot more pastures than fields of crops, so perhaps the soil is too spongy and moist for farmland. 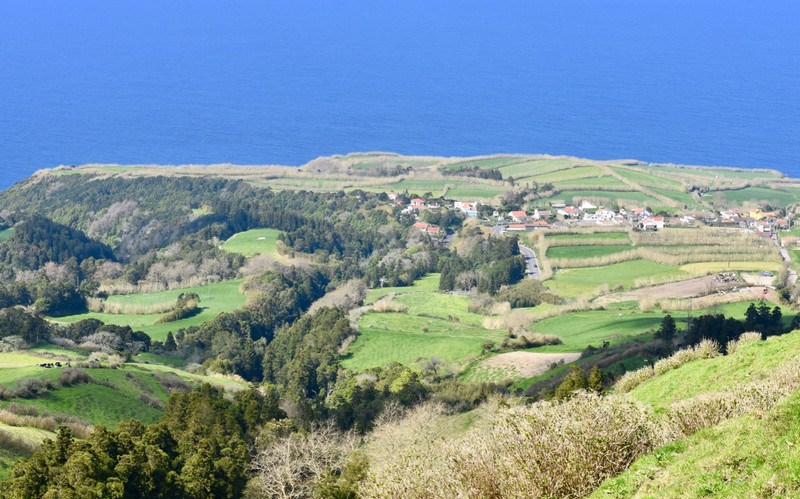 Looking away from the volcano, views of rural Sao Miguel life stretched towards the sea

Towards the end of the hike, the path descends towards the town of Sete Cidades. Strangely, it leaves the wide road it had been following, and instead shrinks into narrow, rocky and very steep path. This was the only part of the hike were the footing was treacherous, at times. Looking at the map, though, the dirt road it had been following arcs around to virtually the same destination. It was if the path suddenly was in a hurry to get into town. I saw other hikers not take the turn off that I did, and follow the gradual road instead. It was a strange end, but there were some nice views as I descended sharply. 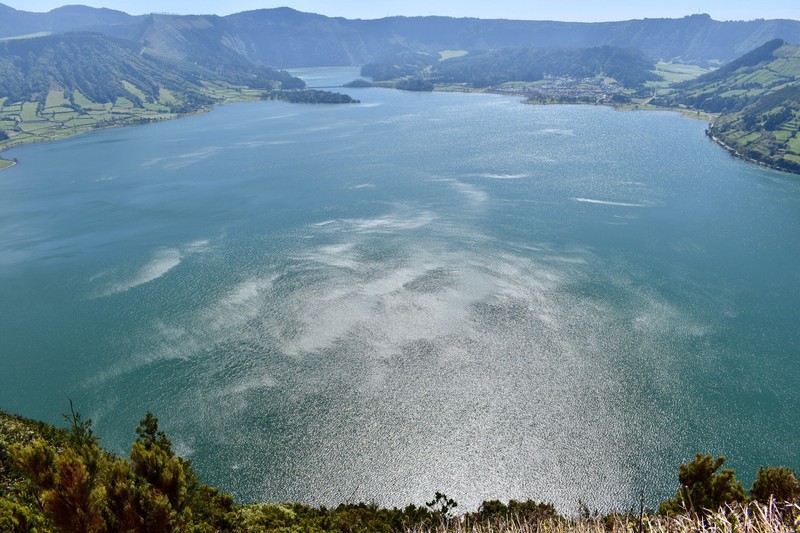 Gorgeous sunshine illuminated the hike throughout my trek, shimmering off the water far below

Once in town, it seemed mostly deserted. Perhaps many of the homes are weekend or vacation homes. This being low season, maybe that is why they seemed empty? I used my cell phone’s map feature to locate a restaurant, and it seemed one of the few places with people around. I enjoyed a late lunch and rewarded myself with an Azorean beer. The hike had taken nearly five hours, with lots of ups and downs along the ancient volcano’s rim. Spring is definitely not the busy season here, but I saw more other travelers on this hike than anywhere else in the Azores. I could tell my legs would be sore the next day. However, I was glad I did this hike. Sete Cidades didn’t disappoint. It was a day of rewarding hiking and incredible views. 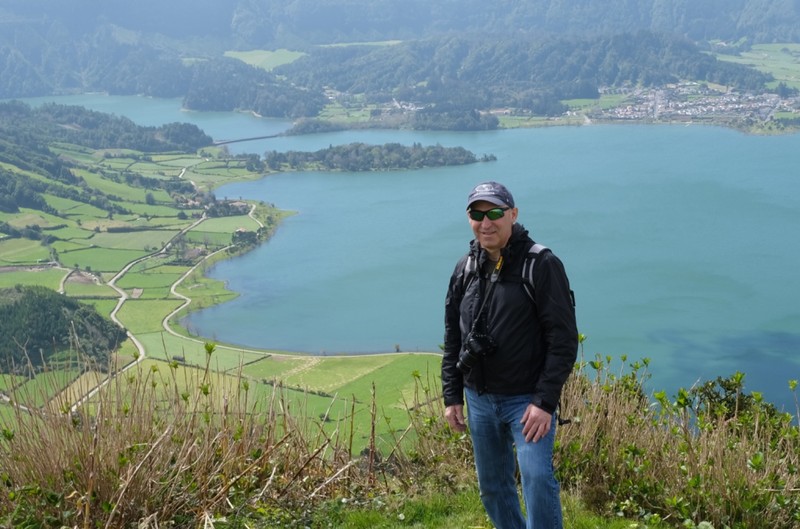 A tiring but rewarding day’s hike 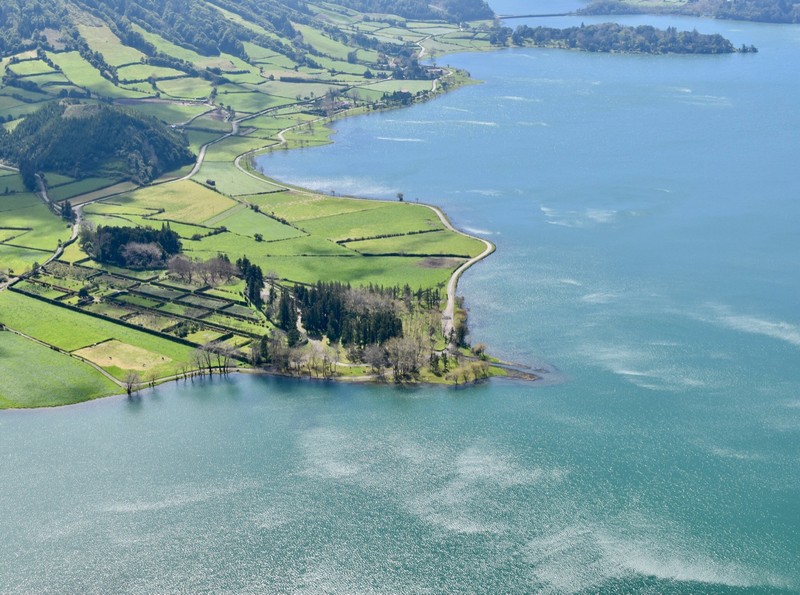 Zooming in on the gorgeous scenery below with my telephoto lens 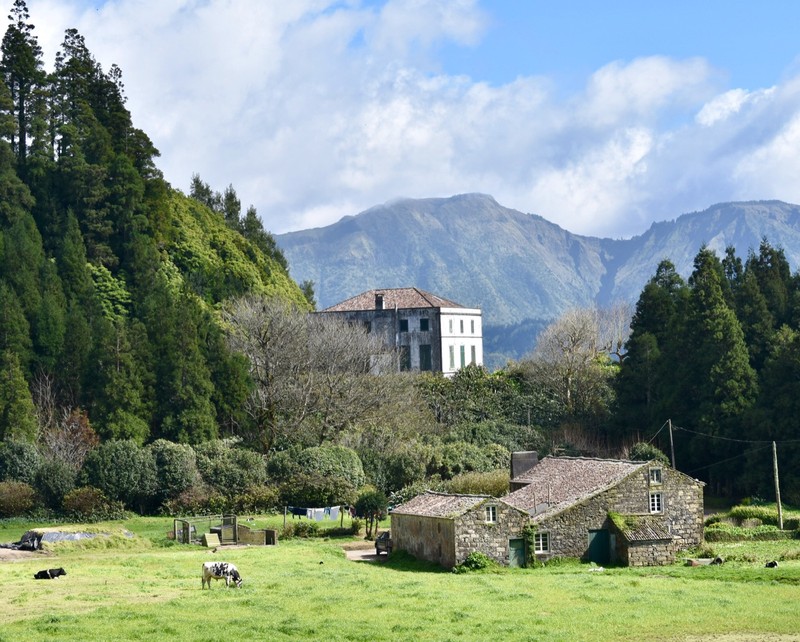 Farm on the outskirts of the town of Sete Cidades

Posted by world_wide_mike 14:25 Archived in Portugal