On a Zodiac Searching for Whales

Fun on the sea in the Azores 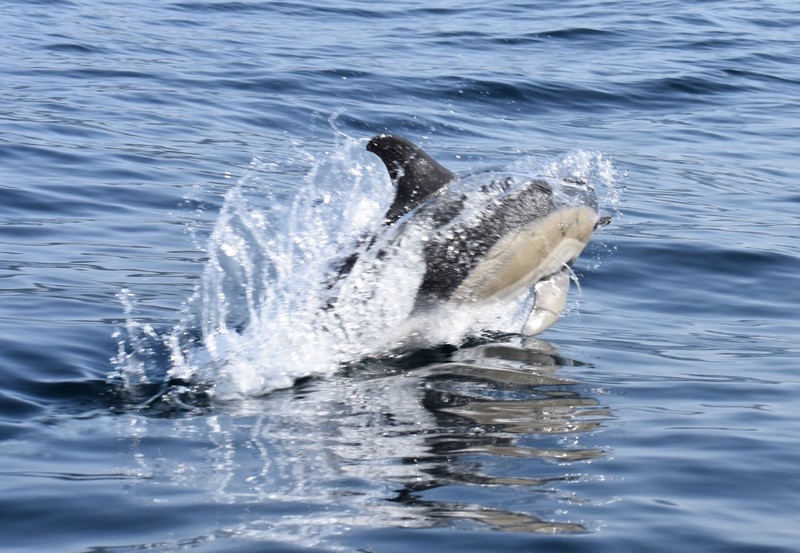 A dolphin leaps put of the water alongside our zodiac boat

I had never been on a whale watching tour before, but the Azores were supposed to be a great place to go on one. The best months for viewing were April through June, supposedly, but I figured it was worth an attempt. There was no money back guarantee at Terra Azul, the tour company I chose. A plus on their side, though, was they went out in a zodiac - an inflatable rubber boat - as opposed to a larger vessel. This would let them get closer to the animals. The reviews I read on TripAdvisor praised them, but warned that people often get seasick. The zodiacs go very fast, and the company recommended a light breakfast (at most) before getting on board. To be safe, I chose no breakfast - not even a glass of orange juice. 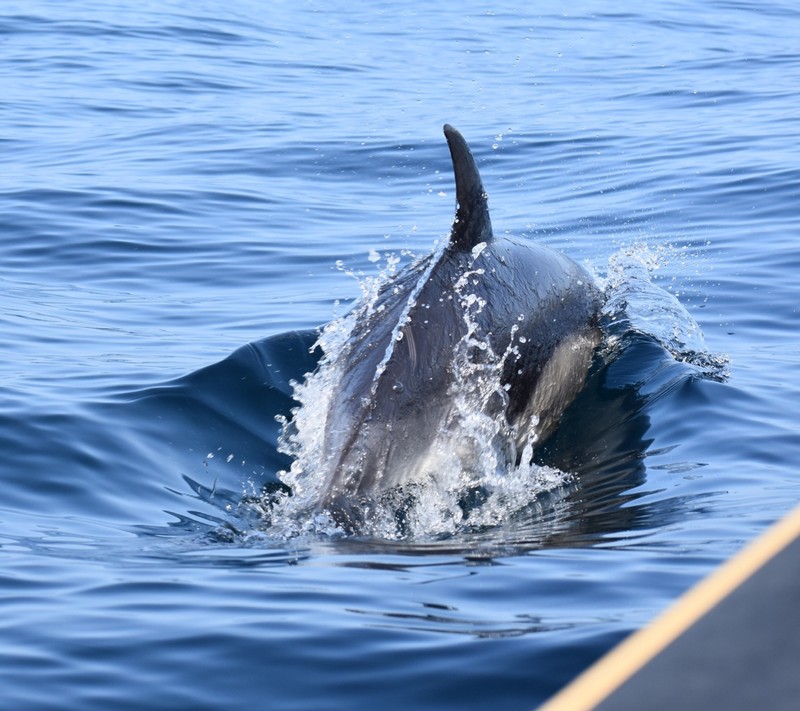 There was a sighting board with some disheartening statistics posted outside the office where the passengers checked in. No whales had been spotted the last four days, and only three in the entire month of February. Every day had spotted either Bottlenose, Striped, or Common Dolphins, though. After our briefing, we geared up with life jackets and waterproof jackets (they warned their would be “spray”). I wore five layers - t-shirt, long sleeve shirt, hooded sweatshirt, suede travel jacket, and rain jacket. I was never cold on the entire cruise, no matter how fast our captain gunned it! Interestingly, you straddle a padded cushion in your aluminum seat, which is also well-padded. This helps you stay upright and inside the boat when it hits a big wave and bounces high.

On our initial high speed cruise to the best viewing spots in the ocean, I felt a slight uneasiness in my stomach. I focused on scanning the waves looking for fins or spray or other signs of marine life. The initial ride was the worst part. After that, I never really felt queasy. I was too into the experience and trying to spot whales or dolphins. At some point, the guide (a marine biologist) spotted a pod of dolphins and we were soon alongside them, where he cut the engine. Then dolphins swam closer and closer until they were directly alongside our zodiac. 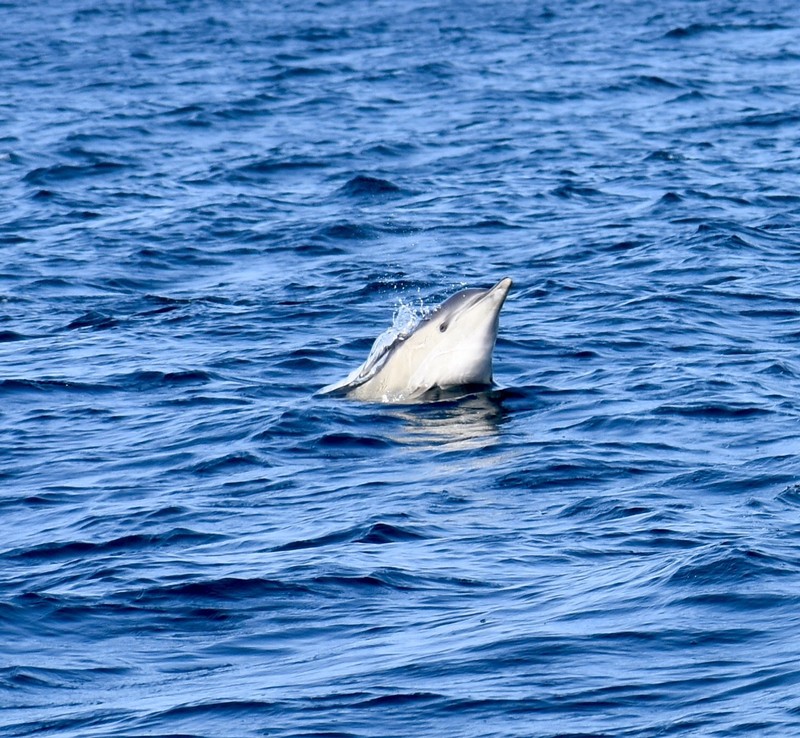 Although we were disappointed to not spot any whales, the playful dolphins made up for it

Then began the frantic game of trying to capture them with my camera as they surfaced to breathe, or even jump, before they disappeared back into the water with a splash. I had my camera set on automatic, and slowly felt I was getting better and better at getting shots of the group of Common Dolphins. When we started up the engines and began to cruise away, the pod invariably followed us. They could keep up really well. This was my favorite part. You could see them just beneath the surface, their broad white stripe clearly visible in the clear blue water. I trained my camera on them, finger poised over the shutter button. Sometimes, I knew my pictures were snapped too late. Other times, I felt I timed it well. I just hoped the photos would not be blurry. 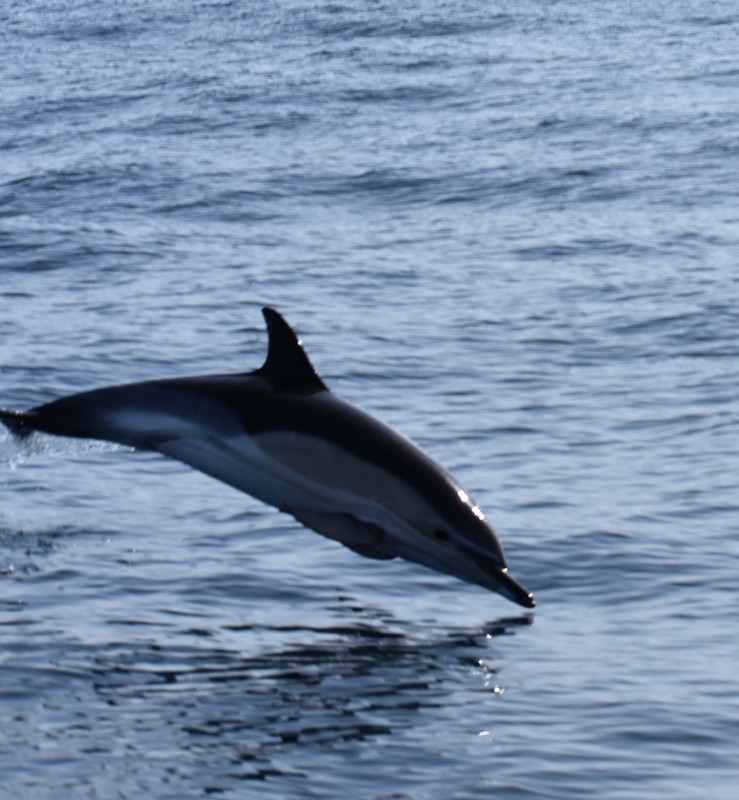 Just a tad blurry, or this would be my favorite shot

Later, I experimented and put it on “Sports” mode. I discovered that was where I should have had it on my digital SLR camera all along! That setting enabled my to keep taking a series of shots as I held my finger down on the button. It was fun trying to anticipate where the dolphins would surface. We came alongside several pads over the course of the three hour cruise. We spotted both Striped Dolphins, too - though, honestly, they looked the same to me. It was incredible when the guide deployed the underwater microphone and we could hear them communicating with each other. Dolphins are such amazing creatures, and the marine biologist had all kinds of information about them. Apparently, They can be super-aggressive towards other species, and have been know to try to mate with other sea mammals, as well. 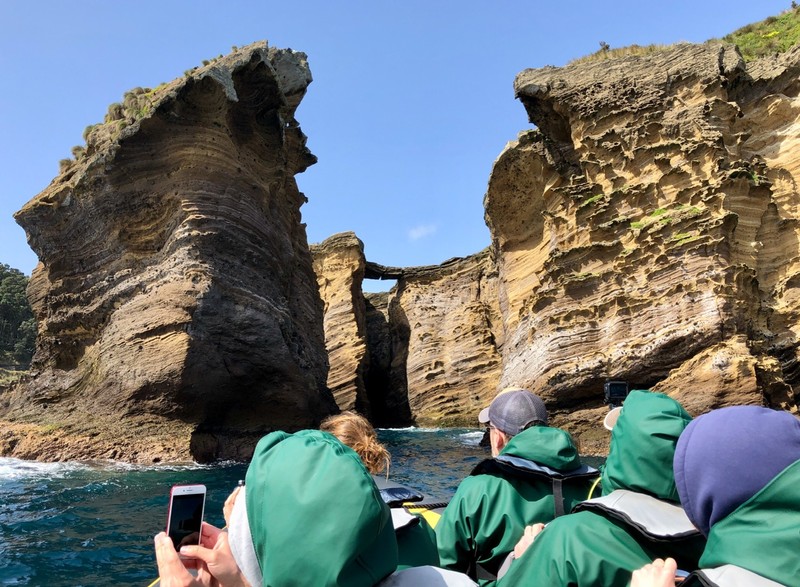 After encountering and taking pictures of several dolphin pods, our guide informed us that our two spotters on the coast had yet to locate any whales. Instead, we would range out further looking and hoping to encounter some. He explained how to spot a whale blowing spray and to differentiate it from a wave splash. I pulled my hood tight as the captain gunned the zodiac’s engines and we took off. The zodiac bounced along, obviously airborne at times. The other passengers reacted with shrieks and giggles. The jolting was never uncomfortable, I felt. Instead, I mentally channeled my inner child and thought, “Wheeeeeee!” while enjoying the ride.

I had fun zooming way in on things with my telephoto lens, like these seagulls

We came up empty, though. Sadly, there would be no whales spotted, today. We did get to check out a really cool rocky island just off the coast that I had spotted on the drive to Furnas, yesterday. It is a giant volcanic plug with vegetation growing on it. During the 1800s, it was inhabited by a wealthy family. At other times, it was a whale blubber burning station. Now, it is vacant, but you can see the relics of its former days as you cruise slowly around it. I switched between my Digital SLR (which had my telephoto lens on it) and my iPhone camera. I did the same as we cruised along the coast, taking pictures of the villages perched on their cliffs and shining in the brilliant sun. Although I had not been lucky with the whales, I hit jackpot with the weather. It was an amazing, warm, beautiful sunny day out on the water. I had fun taking pictures of the dolphins, so I didn’t consider the 55 Euros wasted. 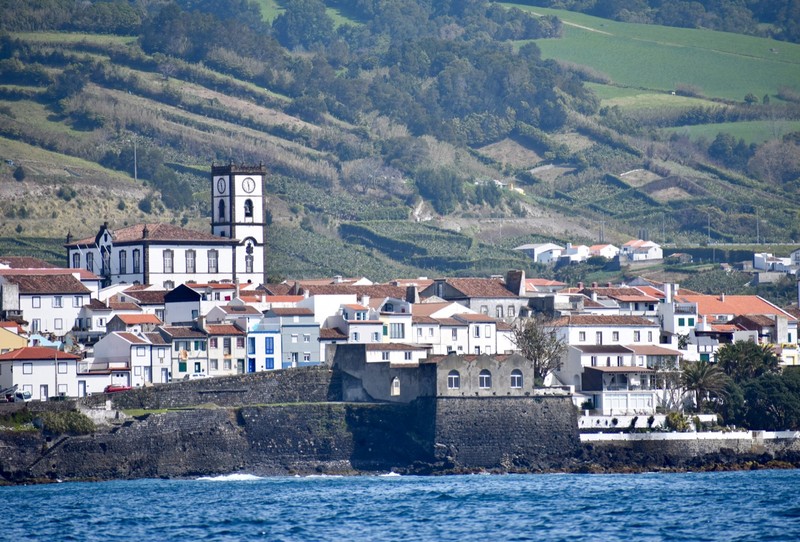 Zooming in on a town on the coastline of Sao Miguel, Azores

Hungry once back on land, I checked out a TripAdvisor recommended restaurant - the snack bar for the local volunteer firefighters (or bombeiros, a much cooler sounding name in Portuguese). I tried a local favorite sandwich. Picture a ham and steak sandwich, with an egg on top, placed in a wide, shallow bowl of tomato soup. It was interesting. Not sure I would order it again, but it was a filling first meal of the day at noon. 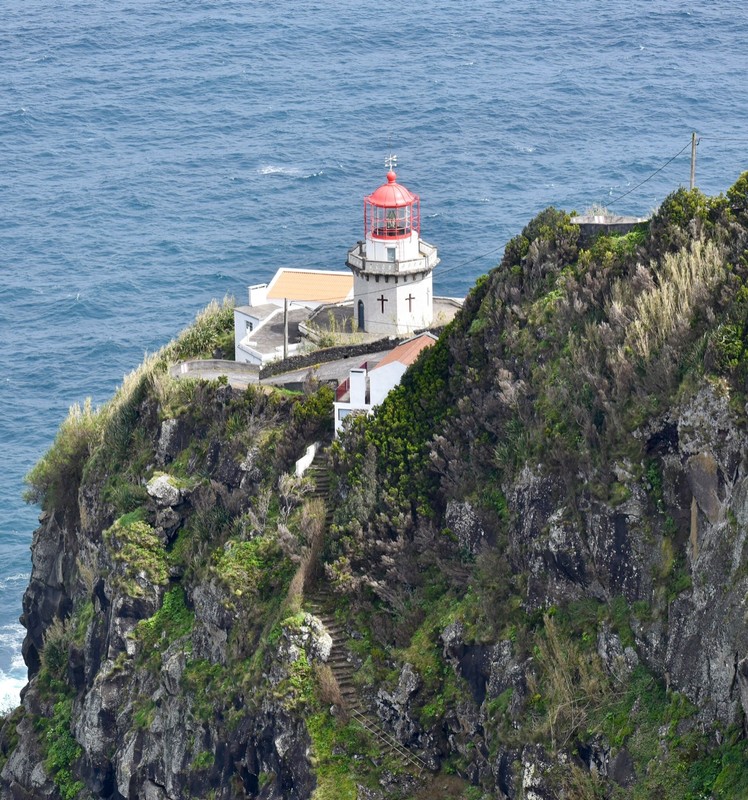 Next, it was off to a scenic lighthouse at Farol Ponta do Arnel, on the northeast coast of the island of Sao Miguel. The reviews I’d read said it was gorgeously sited along a rugged coast. It was reached by an astonishing 35% grade asphalt road that was NOT recommended for tourists to attempt. Non-locals were encouraged to park at the lot along the main road up top and walk down and back up. I took the advice, and found the walk much shorter than it implied. It took me less than 20 minutes to walk back up the 35% grade - which WAS the steepest road that I have ever encountered! 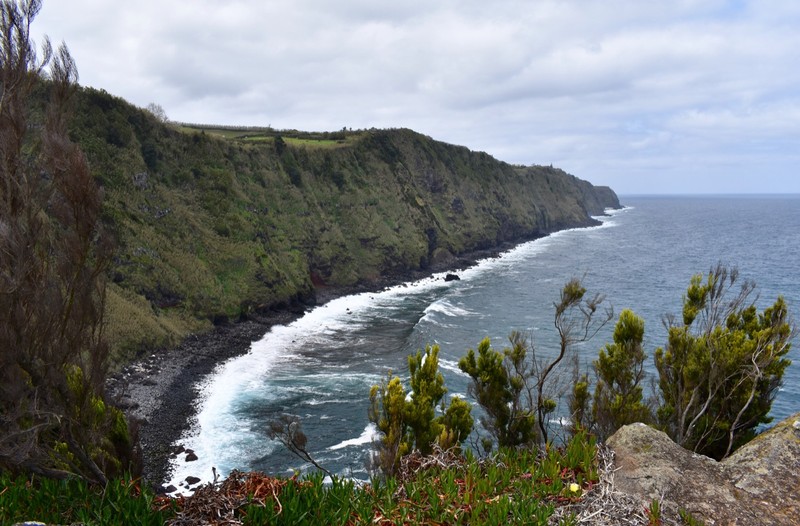 The rugged coastline near the lighthouse

The scenery was nice - not as good as Sete Cidades or Sera Devassa, though. Still, the rugged green cliffs and waterfall tumbling down the escarpment were pleasant follow up to the whale watching tour. There were a number of tiny cottages perched along the road between the top and the tiny concrete pier for fishing boats on the waterside. The cottages all had balconies facing the magnificent view. I could imagine it would be a wonderful place for a writer to spend his days, staring out at the panorama of cliff and sea during the day, and listening to the crash of waves upon rock in the evenings. The lighthouse was white with red trim and looked pristinely kept up. Apparently, they do tours on Wednesdays, which I think would be very interesting. 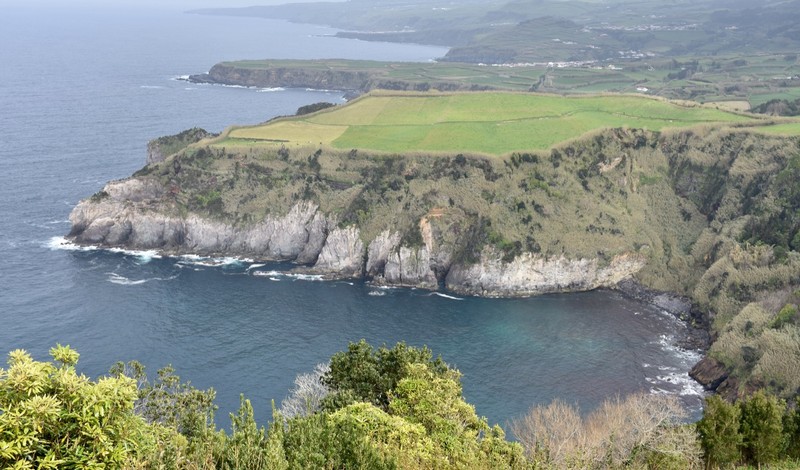 I had been using Apple maps for my GPS to navigate around the island. Other than an early hiccup, it worked very well. Today was its swan song. It routed me along the northern coast, which I had yet to visit. This coast is very scenic and has a number of miradors, or scenic viewpoints, that are well signposted and have ample parking to pull off. I stopped and took pictures at here or four of them, enjoying the sunshine and excellent views. Driving in the Azores was relatively easy, except for the incredibly narrow streets in town. The roads themselves are well paved for the most part, but also narrow. I would highly recommend anyone reasonably confident driving (and navigating) choose that as a way to get around. 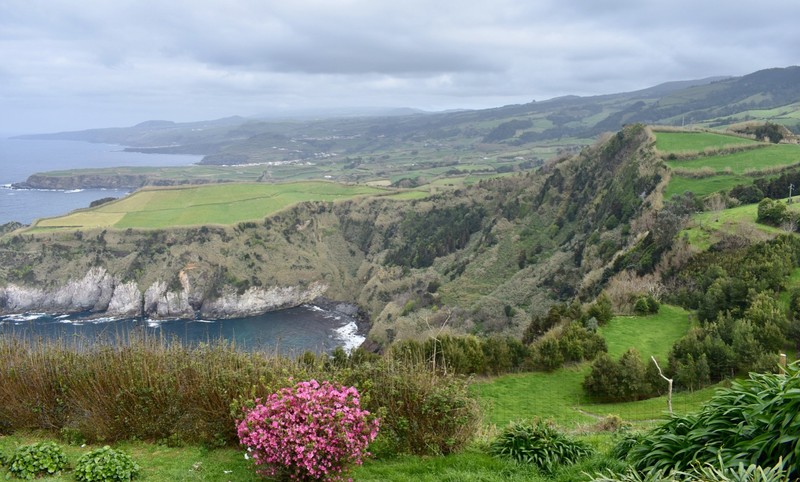 I was glad the GPS routed me along the coastal drive

This was my last full day in the Azores. There were a number of firsts on this day, and it was a fitting way to close out the trip. I would have a little time tomorrow to walk to some sights around town. Hopefully, that would provide new experiences, as well. 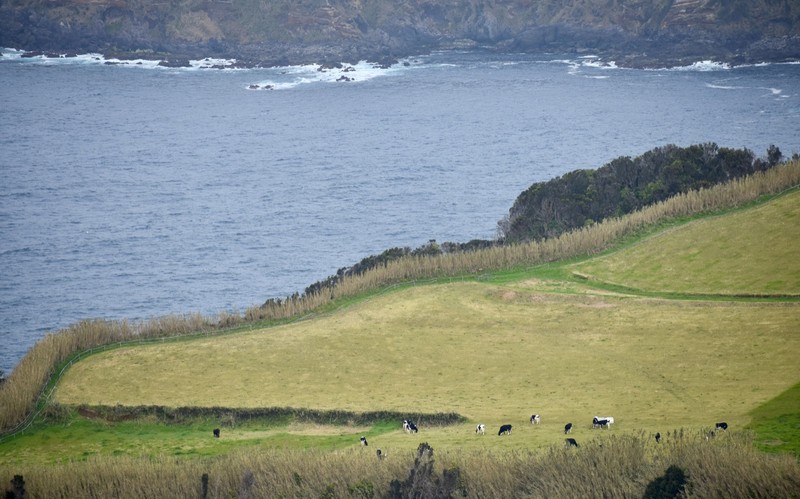 Posted by world_wide_mike 16:53 Archived in Portugal