Barcelona, Spain, and its amazing History

Antonia Gaudi makes a trip to this Catalan city fascinating 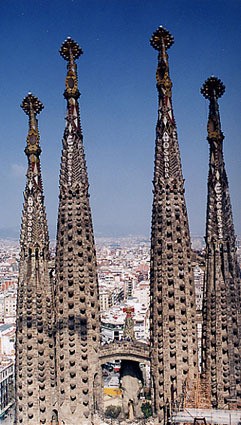 So, what is it about a place that first sparked our interest? Was it a photograph, a book or article, or even a friend's account? Well, for me, it was an album. Ever since I first heard "Gaudi," by the Alan Parson Project, I wanted to go to Barcelona. I was intrigued by the voiceover: "In recent times, there is no one at all who can approach Antonio Gaudi. He started a new cathedral, in Barcelona, it is called La Sagrada Familia...The sad thing is they could try to finish it, but I don't think they will do it."

So, when my plans to see Malta this Spring fell through, I leapt at the chance to finally visit Barcelona. I arrived on a bus from Andorra, and quickly found that Barcelona's metro is quite easy to navigate. I bought a 3-day Pass and would use it often -- the first time to find my hostel on the Rambla de Catalunya. I hadn't stayed in a hostel in years, but accommodations are so expensive in Barcelona, I felt it was the only option, as I was trying to save money. Once checked in, I grabbed my camera bag and headed out to see the sights.

One neat feature of Barcelona's streets are its "Ramblas." These are wide, tree-lined boulevards with the biggest part, in the center, reserved for pedestrians. Two narrow lanes on either side of the Rambla are for vehicles and run one way in opposite directions. The most famous Rambla runs from the central transport hub at Placa de Catalunya -- not far from my hostel -- to the harbor. I strolled down it, stopping for lunch at a local pizzeria.

My sightseeing began with the Museo d'Historia de la Ciutat, which takes you down into the city's subterranean Carthaginian (the famous general, Hannibal Barca = Barcelonia), Roman and Visigothic roots. There are also numerous stretches of its Roman walls still extant, and it was an interesting cruise through underground passages. From there, I walked down to the harbor, then along the bustling harborfront to the Christoper Columbus monument. This tower, with a statue of the mariner pointing out to sea, has an elevator that whisks you up for a grand view of the city. 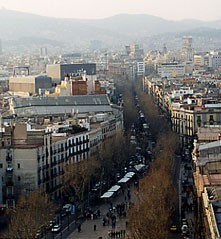 As dusk was falling, I headed back to my hostel for a break before venturing out for dinner. That evening, I thought it would be fun to check out the Travel Bar, which bills itself as a place to meet other travelers. It was enjoyable, but I'd say the bar pushes its Pub Crawl and getting smashed a little too hard for my tastes.

The next day was my Antonio Gaudi day, when I would visit his numerous buildings, including the signature cathedral, La Sagrada Familia. Although I am normally not a fan of Modern Art, I loved Gaudi's architecture. His outlandish use of curves and weird shapes and textures somehow worked for me in a buiding, where it doesn't on canvas. Plus, despite his odd designs, his work is immensely practical, I feel. He would do ingenius things, like freeing a building's facade from holding the weight so that he could make immense windows to bring in more light. The mixture of oddities and practicalities kept me fascinated all day long. I started with Casa Battlo, then moved onto La Pedrera -- which I highly recommend. If you visit one museum or building of his BESIDES the must-see La Sagrada Familia, make it La Pedrera. Nowhere in Barcelona did I find exhibits that did a better job of bringing the early 20th century ascetic architect and his work to life. 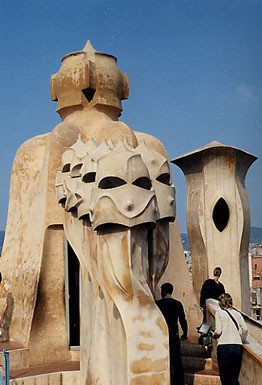 The bizarre rooftop of La Pedrera

From there, I headed to the madhouse of crowds that is La Sagrada Familia. As advertised, it IS still a construction site, and it is still many, many years from being finished. However, what is done is very interesting. I was particularly enthralled by the pillars which are formed vaguely like trees with a main trunk and branching out progressively with more limbs to support the weight of the ceiling. I waited nearly an hour for the elevator ride up one of the towers, but it was worth it. You get a close up view of the colorful ceramic decorations on the towers. The museum in the crypt didn't hold a candle to La Pedrera, so I breezed through that.

Afterwards, it was time for lunch, and I jumped at the chance to "bag" a Pizza Hut in another country. I know, but hey, the pope kisses the ground when he gets off a plane, I can have my own traditions, right? After lunch, I took the subway up to Gaudi's foray into garden design at Parc Guell. If you're into gardens, I imagine it would be worthwhile. I thought it was kind of overrated, and wouldn't say it was a highlight. Then again, I'm not really into gardens (and I like Pizza Huts!), so who am I to say?

I finished up the afternoon with Barcelona's Arc de Triomf, its main cathedral and another modern art building or two. For dinner, I stopped in a local bar and had real live Catalan cuisine to make up for my Pizza Hut faux pas (white sausage sandwich, which sounds like a euphemism for...well, never mind). I finished the evening using my hostel's free internet to catch up on e-mail and read some posts on my favorite travel site, Travelpunk.com.

My final day of sightseeing saw me taking a cable car up the Montjuic Hill, that overlooks the center of the city, to Barcelona's castle. The views from up top were gorgeous because -- of course -- it was another warm, sunny day. Counting my trip to Spain with my brother years ago, this made something on the order of a dozen days in Spain with nothing but warmth and sunshine. This country has the best weather I've ever seen in all my travels! Anyway, after pacing around the Late Renaissance era fort, I headed below to its Museo Militar. As a military history buff, I couldn't resist. After an hour-plus of looking at swords, armor, etc., I was ready for a little outdoor hiking. It was a good thing, because my sense of direction failed me utterly at this point. I took the L-O-N-G way down the hill. I still did see what I wanted to -- the sporting facilities from Barcelona's hosting of the 1992 Olympics, and the Vatican lookalike outside of the Museum of Art -- I just took quite a looping path to do it all. 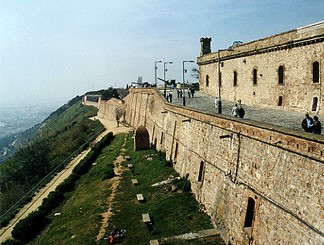 Barcelona's caste and its view

After a late lunch at a cafe, I decided to try one more museum -- Barcelona's Maritime Museum. It was the best in the city, I felt. The funky little headset they give you to walk around the museum with was great, with incredibly atmospheric music and good narration. The highlight was the full size reconstruction of the flagship galley from the famous Medieval sea Battle of Lepanto. The Catalan people (NE Spain, basically) have a rich seafaring tradition, and the museum did a wonderful job of personalizing its subject and bringing history to life.

As darkness was falling, I knew my time in Barcelona was drawing to an end. After dinner, I wandered over to take one last look at La Sagrada Familia, lit up at night. I lingered for a few minutes, the tune and words to a decades old Alan Parsons Project song in my head. "Especially the dosing lyrics, "Until the next time, until the next time..." 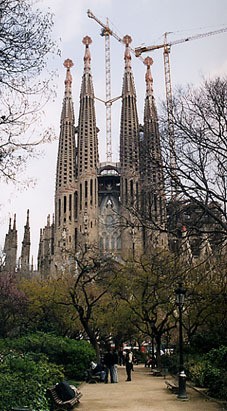 Posted by world_wide_mike 06:59 Archived in Spain