My Beach Resort in the Philippines? 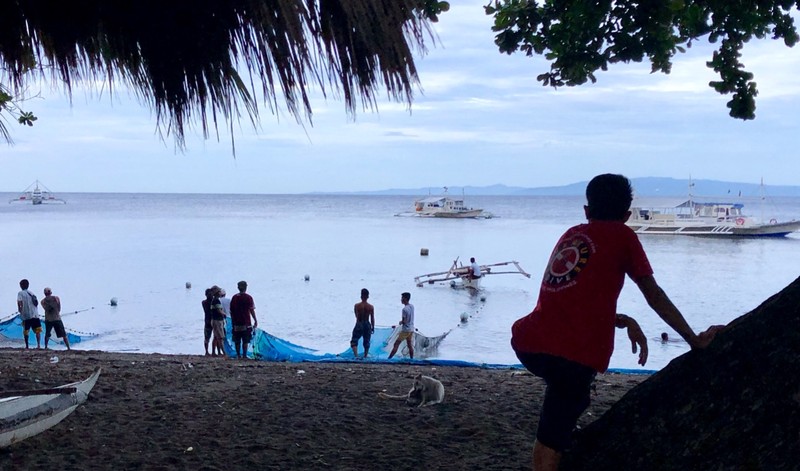 A place named Mike’s Dauin Beach Resort in the Philippines? That sounded like a perfect way to unwind from a stressful 2019, and lead into this summer’s adventure. The fact that the owner was an American originally from Ohio only made it seem even more fitting. I would need some rest and recuperation after my 17 hour flight from Singapore, and overnight flight to Dumaguete City through Manila. When I landed on Thursday morning, I had not actually spent a night in bed since Sunday night/Monday morning. I was able to get a decent amount of sleep on the flights, but my first day I crashed and slept much of the afternoon away. 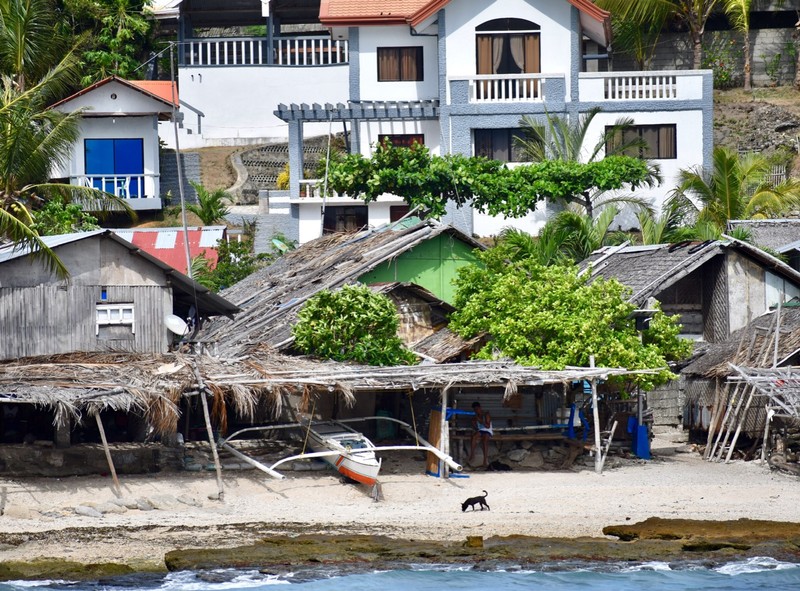 A cluster of beach huts on Apo Island

The resort manager, a friendly Englishman named Nick, had booked me on a snorkeling trip the next day to Apo Island, whose waters surrounding it were protected as a nature reserve. Mike’s is really a dive resort, and runs two dive boats, with excursions leaving on a daily basis. Snorkelers can go along, but pay less because we don’t require the oxygen tanks, dive equipment, or underwater guides. It also means that the trips caters more to divers - not snorkelers. The water was really choppy at two of the three places the divers went in. Only one of them featured calm waters, but it had a fast current that meant I was huffing and puffing to paddle my way back to the boat. There was lots of beautiful coral, though, and I even saw a sea turtle in my short amount of time in the water. The divers said the waters were amazing, though, and nearly all of them carried GoPro cameras with an underwater case, good to 60 meters depth. 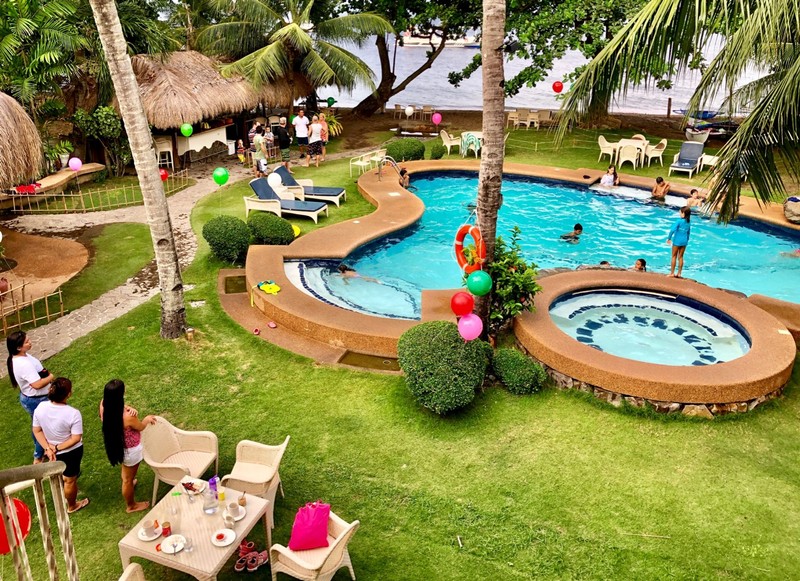 The pool, where I spent more than a few hours relaxing in my short stay at Mike’s

I sheepishly told them about my fear of sharks keeping me from get scuba qualified. They laughed and of course told me how sharks are friendly and more scared of us than we are of them. They also proceeded to tell me about their dives with sharks, convincing me more of their insanity than my safety. Still, it was cool to see them gear up, and then return a half hour or so later excited about what they’d seen. Maybe one day I will work up the nerve to get scuba qualified. I am sure that is precisely what Mr. Jaws is waiting for, though!

I made up for the lack of snorkeling time by taking lots of pictures of the island, dive boats, the fishermen on their small outriggers, and the sea and sky. While snapping pictures, I either had one arm wrapped around a pole or my feet bracing my weight against a wall to compensate for the boat’s rocking motion. For being rainy season, we had a gorgeous day. In the morning on the way to Apo Island, we did motor through one rain squall. But otherwise, it was a perfect day on the water. They provided chicken and rice for lunch, and fresh cut slices of watermelon at the end of each dive. A nice crisp lager would have complemented the spread, but maybe that is a no-go for diving, because it was only water or coffee. 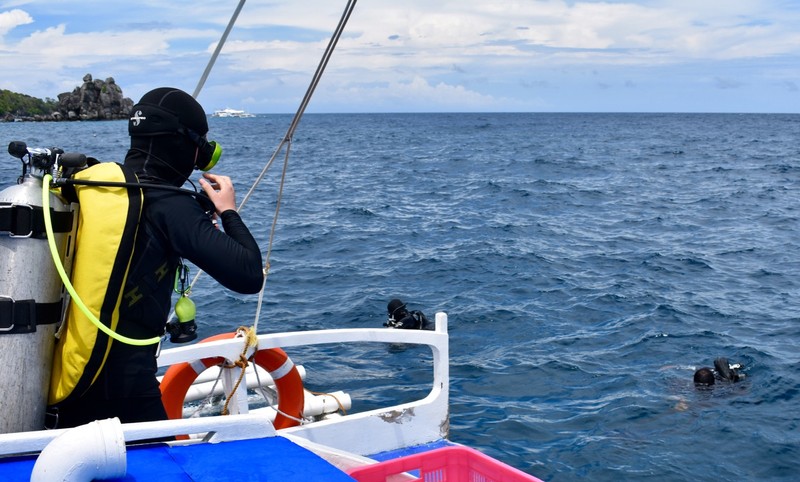 The divers did three dives each, and said the fish and coral were magnificent

The resort itself has a very nice pool, which I took advantage of a number of times during my stay. The pool is surrounded by shaded, padded lounge chairs. There are more chairs just a few yards away on the resort’s slice of beachfront. The beach in Dauin is used by locals for fishing as well as by occasional small resorts like Mike’s. The fishermen’s colorful outriggers are pulled up on the beach, while the larger diving outriggers are anchored just a short distance out in the water. While walking along the beach you see the mix of locals and resorts, which preserves some of an unspoiled aspect. We have all been to beaches where the hotels are chock-a-block, one after another, giving it a commercial and almost artificial feel. Here, it was much more unsullied - just boats, palm trees, and sand. The sand in Dauin is dark — a mix of brown and volcanic black sand. 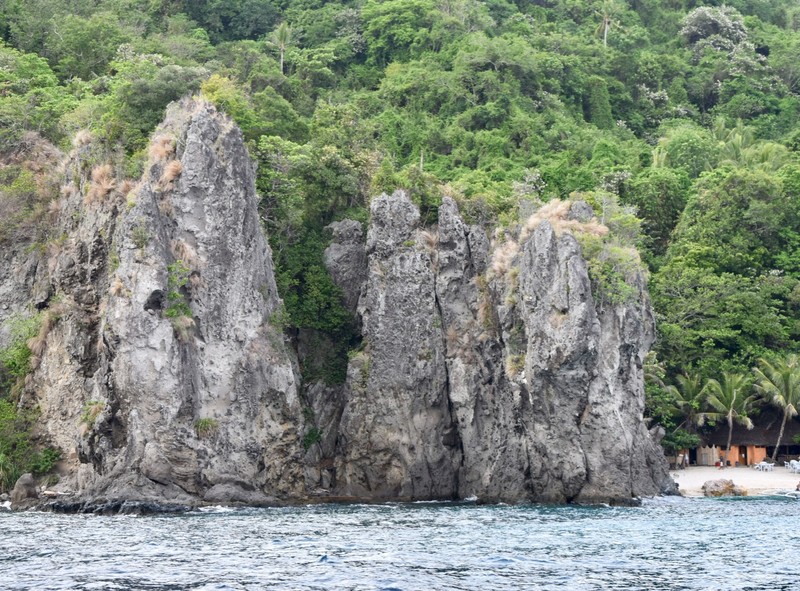 The rocky shores of Apo Island

About 10 minutes walk down the beach is a great snorkeling spot right off the beach, too. I made up for my limited snorkeling at Apo Island there, exploring first along the line of buoys which mark where swimmers are allowed, and ducking under the rope where snorkelers and divers can swim. As you first snorkel out from the beach, you see only brown sand and various dead vegetation and even refuse covered in the brown sand. Then, you begin to see movement and spot fish nibbling at plants. Next, you seen an occasional outcrop of coral, some colorful, some blanched or covered in the brown silt. Finally, you come to the huge outcroppings of coral, sea fans, anemones, and other more colorful sea life. As you venture further out, you find yourself floating between canyons of coral. It actually becomes tricky navigating a path through it at low tide, because you don’t want to accidentally damage the coral near the surface.

Dive boats come in all shapes and sizes, but are the most common sight in the waters around Dauin

It was simply amazing gliding along and seeing the sea life all around me. I mentioned my fear of sharks before, so doing this by myself was a huge leap of bravery. I have to admit that my eyes kept scanning out towards the deep water to make sure no sharks were silently tracking me on my path through the canyons of coral. No sharks, but I did see some amazing fish. I saw a speckled gray and black rockfish, lurking on the sea bottom, eyeing the schools of smaller fish passing overhead. I saw colorful yellow and black angelfish, and the famous orange and white clownfish (Finding Nemo). Every shade of the rainbow fed around the coral - deep purple fish, red, brilliant blue, and vibrant yellows - like tiny specks of sunshine darting beneath the waves. 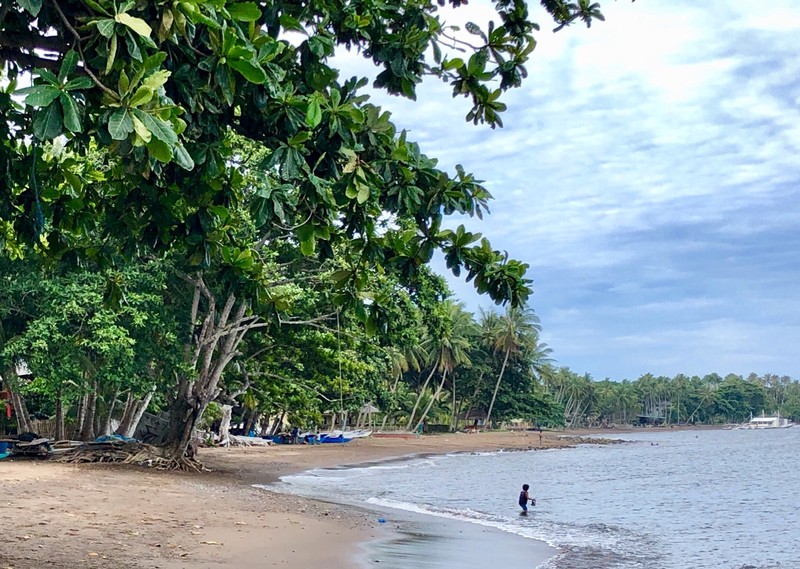 A10-minute walk along this beach brings you to amazing snorkeling

The coral was equally colorful. At one point I felt I was swimming through a novelty store lit by black light — so vivid were the fluorescent reds, yellows, and blues of the branches of coral. I floated over brain coral, marveling out how much it did indeed look like a massive, exposed brain poking through the sandy ocean floor. I never did find out what my favorite was, but it was curved with ridges like some melted clamshell. Its entire tan surface, though, was covered with tiny white cilia - hair-like projections that were gleaming white in the sunshine. As the current caused the cilia to ripple, it seemed to glow iridescently as if covered by a million fiber optic cables lit with white light. I floated above it for a couple minutes, spellbound by its beauty. 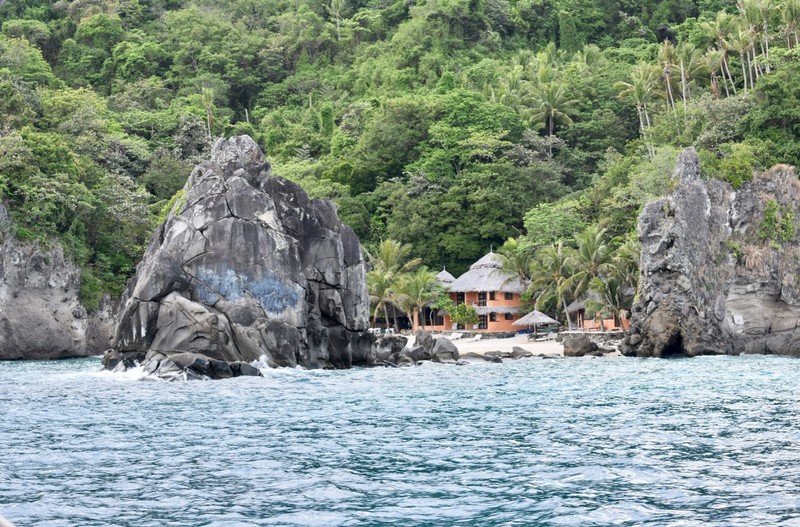 Beautiful tropical scenery and idyllic beach huts in the Philippines

Other guests at the resort had snorkeled there during my short stay at the resort. A Norwegian couple said they saw three turtles in there exploration of the coral reef. I didn’t see any turtles at this spot, though I had seen one at Apo Island. On my last snorkel at the reef, I had one hilarious but alarming incident. I was just getting out of the shallow areas at low tide and venturing into the deeper sections, when I felt something grab my right fin. I spun around to see one of the stray dogs that roam the beach had accompanied me out. He darted back to the beach, having played his practical joke and given a snorkeler a heart attack. 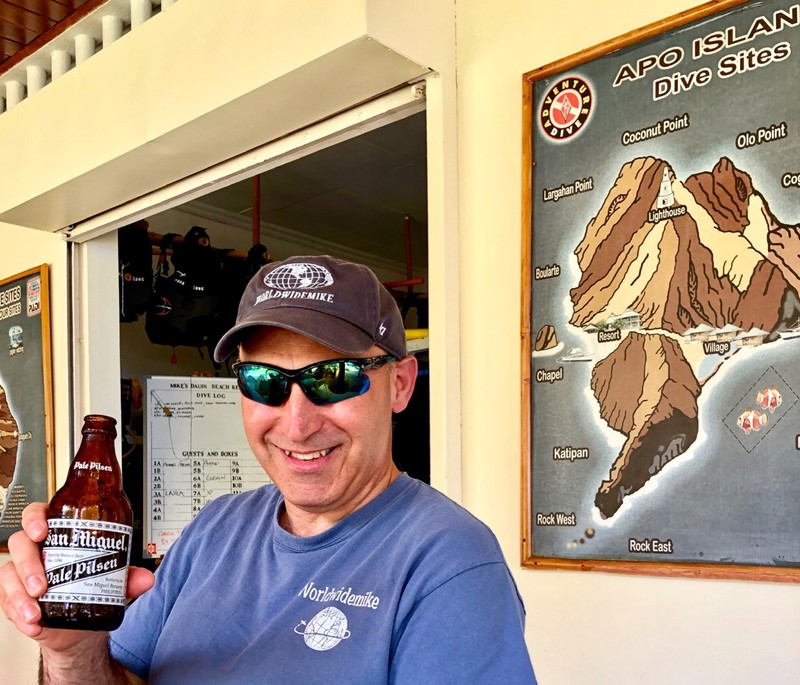 Speaking of dogs, Mike’s has a resident black lab who was a sweet presence. Lacy is older, and obviously partially blind. She spends her days napping in the sun and soaking up all the petting and love guests are willing to hand out. She is not averse to being snuck some table scraps either and will gingerly waddle up when she smells food at your table. The food at Mike’s is incredible. Everything is made with fresh ingredients, and they have a fairly varied menu. The portions are Cheesecake Factory enormous, and there was only one dinner that I believe I finished during my stay. Breakfasts were amazing, too. I began every day with a mango shake, and alternated between fresh fruit or the best banana pancakes I have eaten in my life. If you’re a foodie, you will love your stay at Mike’s Dauin Beach Resort. 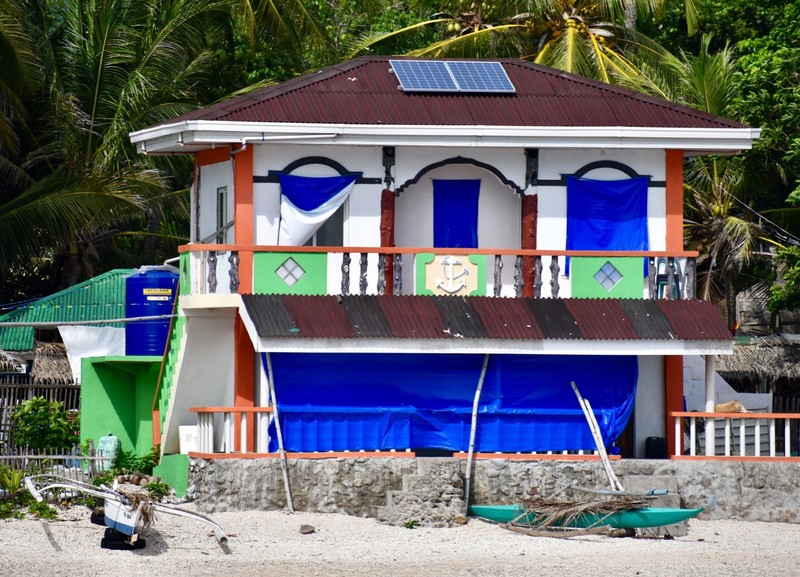 An upscale beach home on the shores of Apo Island

Another reason I would highly recommend this resort to divers, especially, are the staff and owner’s family. The manager Nick has the perfect personality for his job, always cheerful, chatting up the guests, seeing what they need and arranging anything that needs to be done. After Apo Island and the problems I had with mask leakage, he gave me a little class in how to avoid that, showing me what I had been doing wrong. Nick has an easy relationship with the Filipino staff working there. He cajoles them and they tease back and forth. It is obvious the staff is very happy to be working at such a pleasant place like Mike’s. Everyone was invariably cheerful and helpful, happy to be able to cater to any need. 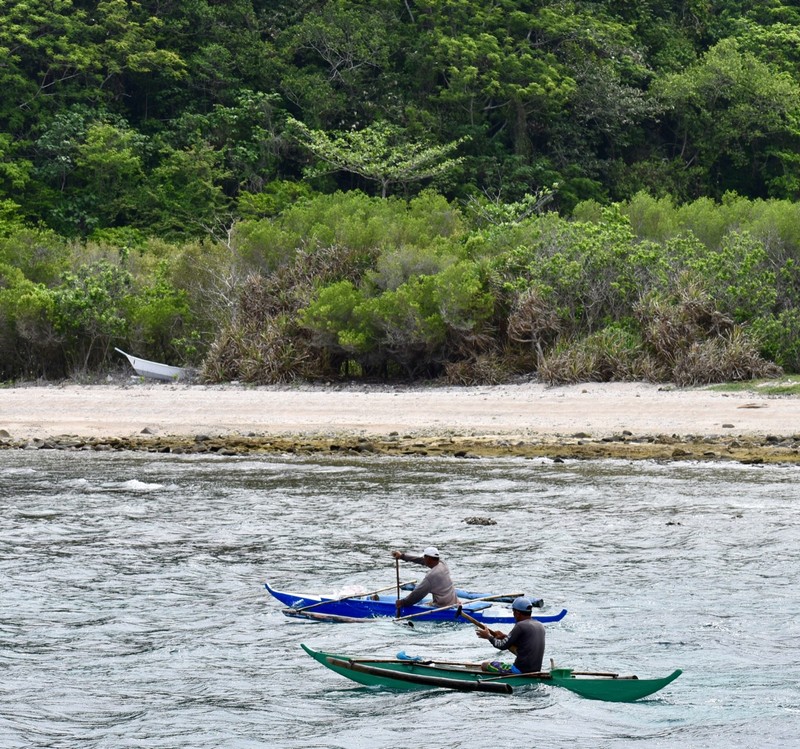 I struck up a good relationship with Mike, who was staying there for a couple weeks (he normally lives in Florida). He talked to me about his career arc that took him from the Sandusky area to owning a dive resort in the Philippines. He invited me to join the party they were throwing one night in celebration of two of his children’s birthday, and partake of the free food and beer he had lined up for the 50-plus guests. I also struck up a good relationship with his oldest son, Keith, who is in his mid-30’s, and lives in Northern California. He is a history buff like myself. He loves to collect arrowheads and spear points in the plowed fields around his home. He is even trying his hand at napping his own points with local stones that catch his eye. He told me about exploring a WW II Japanese bunker in town that I would have visited with him if I had one more day.

By afternoon, the waters can get crowded around Apo Island

It was a short stay on the island of Negros Oriental, but the staff and fellow guests made me feel at home. Most who know me understand that I am not a “veg out on the beach” type of person. However, my time at Mike’s was just the tonic I needed to unwind from the stresses of school and family. It is almost like the place had my name on it! 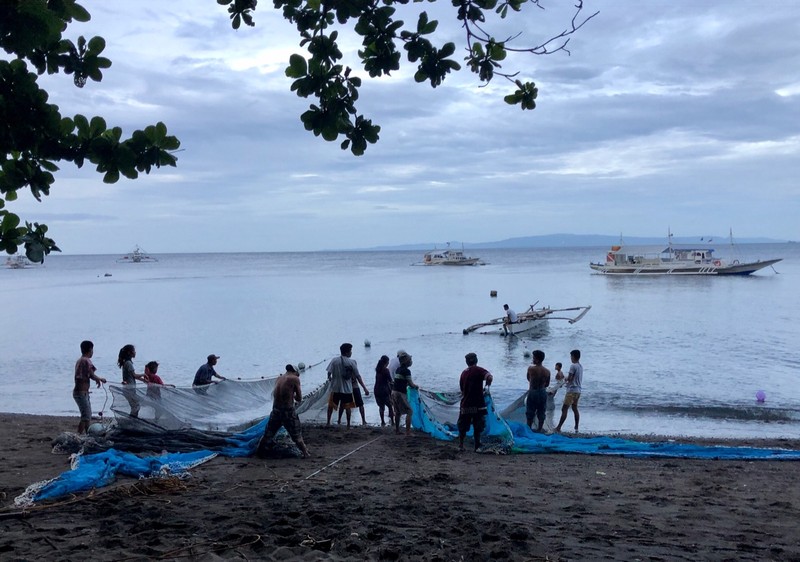 Posted by world_wide_mike 01:07 Archived in Philippines