Singapore’s Delightful Gardens by the Bay 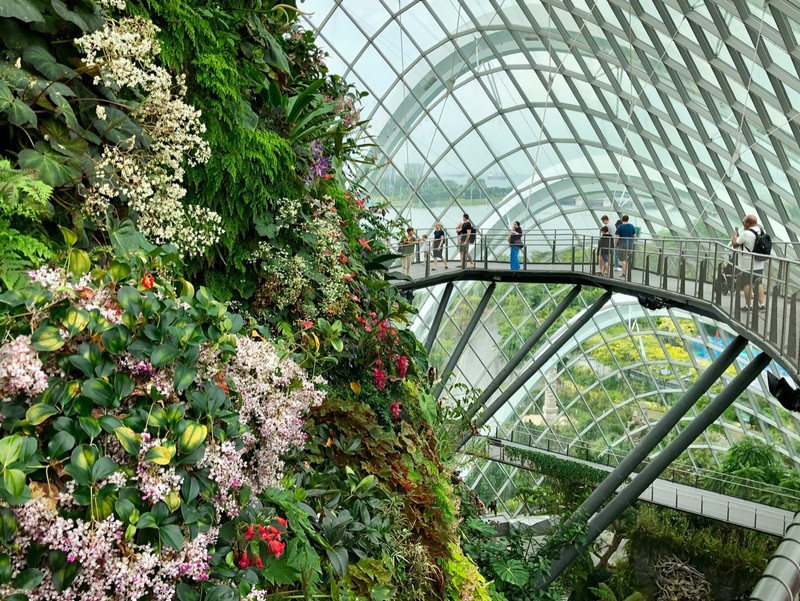 The interior of the Cloud Forest Dome at Gardens by the Bay, Singapore

When I talk about traveling in Asia, I tell people that Singapore is my favorite city in Asia. Those who prefer their cities chaotic and a bit crazy, will disagree. You can read my entries from my 2016 visit there on this blog, for more details about it why I like Singapore so much. Earlier this year, I made the decision that I was not going to refrain from traveling abroad like I did last year. With all of the health problems my parents are experiencing, I opted out of a summer trip in 2018. However, when I saw a good round trip price from LAX to Singapore, I pulled the trigger and bought it. 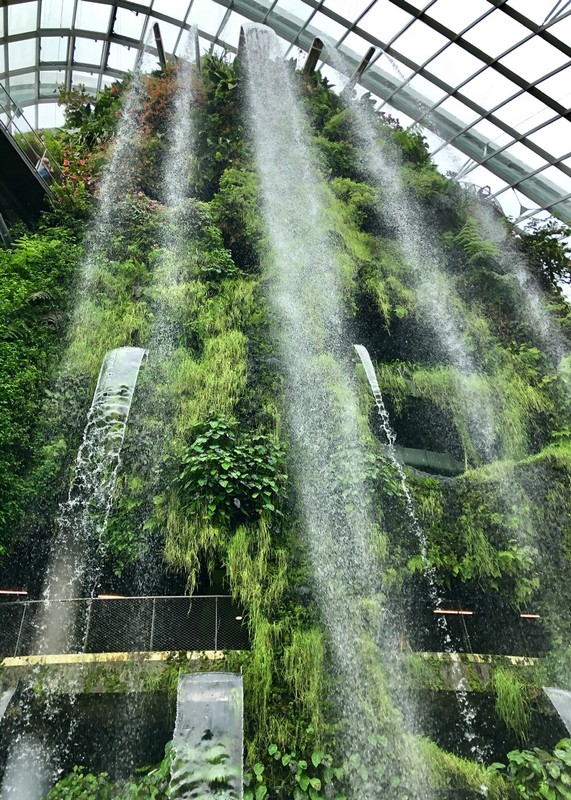 The indoor waterfall at the Cloud Forest Dome

As it turned out, I would have extremely limited time in Singapore. My main destination for the summer was Bhutan, and I was at the mercy of when I could schedule a tour to this hard-to-visit, Himalayan country. Still, I had enough time to hit one spot that I was upset I didn’t get to in my last visit - The Gardens by the Bay. You can think of Singapore as a Dubai in Southeast Asia. There are a number of over-the-top attractions just like Dubai has, and the Marina Bay Sands Resort and the adjacent Gardens by the Bay are two examples. I had visited the towering, futuristic Marina Bay complex in 2016, so the gardens were the number one attraction that I wanted to see here in my short stay. 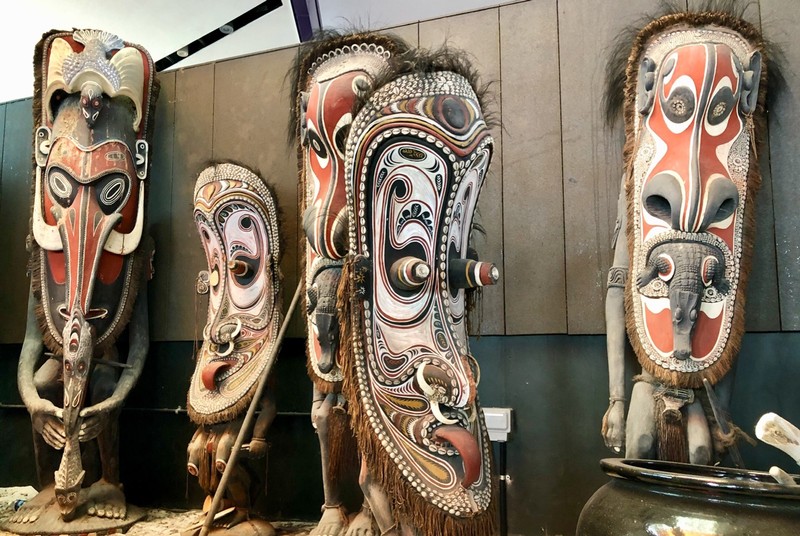 Painted masks in the style of New Guinea aboriginal cultures

It is essentially a sprawling botanical gardens, though with a high-tech, Singapore twist. It’s most signature sights are the two, climate-controlled domes with thousands of plant species suited for that biome. My first stop was the Cloud Forest dome. There are six separate levels of pathways and walkways - some suspended high in air above the floor level. The dome is designed to simulate a mountain side climate, with lowland tropical vegetation at the bottom, up through rain forest, and gradually changing to cloud forest at the very top. You begin your visit circling the ground level, where you find an elevator to take you straight to the top. As you step off, it is noticeably cooler. You walk out onto skyways that circle the “mountain” that is the center. Each of the thousands of species are arranged attractively at their particular environmental niche. 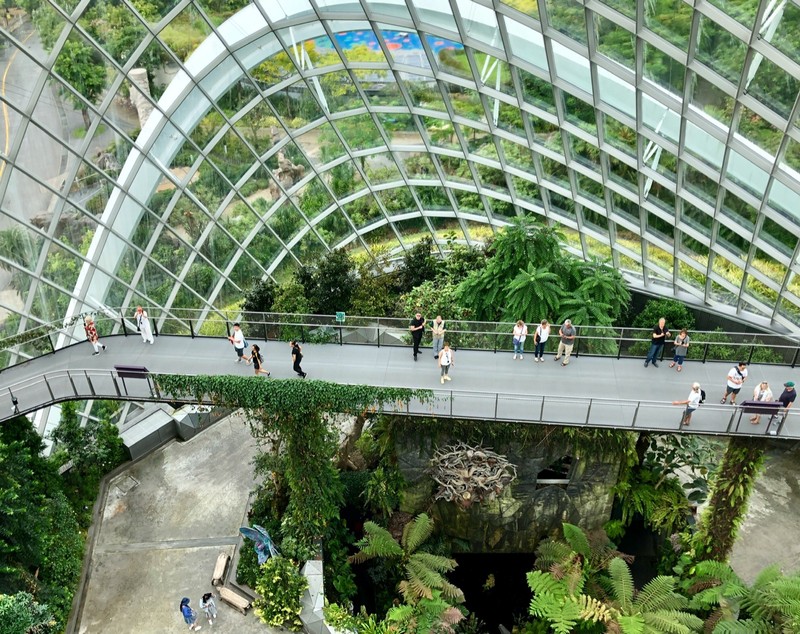 Suspended six stories about the ground level, the Cloud Forest Dome’s skyways are an awesome experience

Another cool aspect is the reproduced examples of artwork from around Southeast Asia - painted masks from New Guinea, statues and totems from other islands — all are placed aesthetically amidst the colorful flora. Some represent the mythology of the cultures, others the craftsmanship. I have to admit that I am not normally a botanical gardens type of guy. But I love taking pictures, and the arrangements of the flowers and other plants were so artistically eye-catching that it was a joy to photograph them. 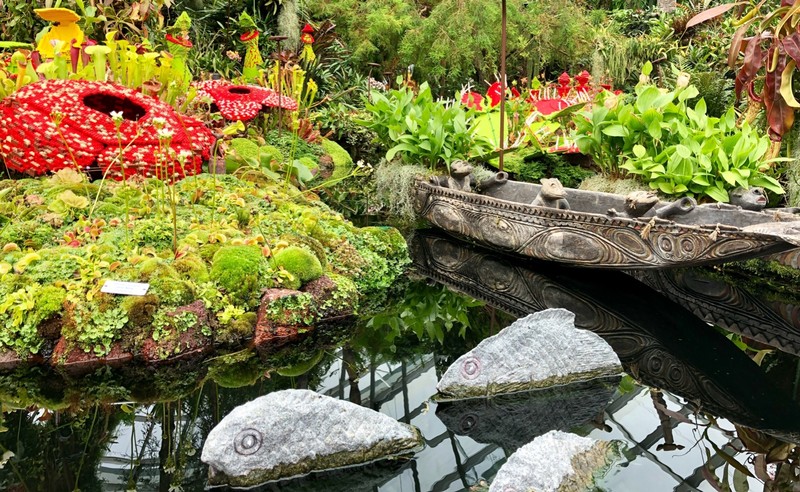 The Gardens by the Bay’s exhibits art often an eclectic mix of plants, native crafts, and modern art

I slowly wound my way downwards, passing the source of the enormous indoor waterfall, a crystal cave explaining the geology of cloud forests, and squeezing past more selfie-takers than should be permitted under one roof. I try to be polite and not walk between a photographer and his or her subject, but there IS a time limit for snapping your pictures. It is rude to expect others to wait more than 10-15 seconds or so while you line up your model shoot or Instagram post. Those taking half a minute or more deserve the photo bombs they get, in my opinion! 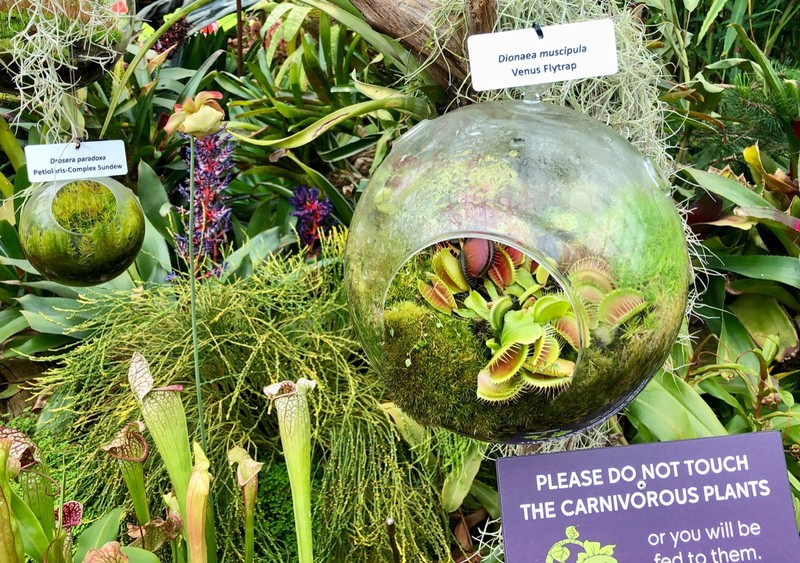 There were displays with orchids, carnivorous plants, and a bedazzling rainbow of flowers. Nearly all of the plants were labeled, and the Gardens does a great job trying to educate visitors about eco systems. The domes and climate within them are designed to simulate nature and be as ecologically friendly as possible. The water that falls as spray rain (or from the waterfall) is collected at the lowest levels and circled back into a closed environment. At the very lowest level are numerous exhibits about the importance of protecting our environment. One theater with an all-around (including the floor) screen walks viewers through the climate change and its projected effects world-wide as the global temperatures rise. It shows vivid video of species loss, deforestation, glacier melt, droughts, flooding, and more. It makes an impassioned but scientifically-based plea to viewers that now is the time to reverse this process, and make our modern world more friendly to the environment. I can think of a certain U.S. president and his supporters who could do well with learning from this film and other exhibits in the Cloud Forest Dome. 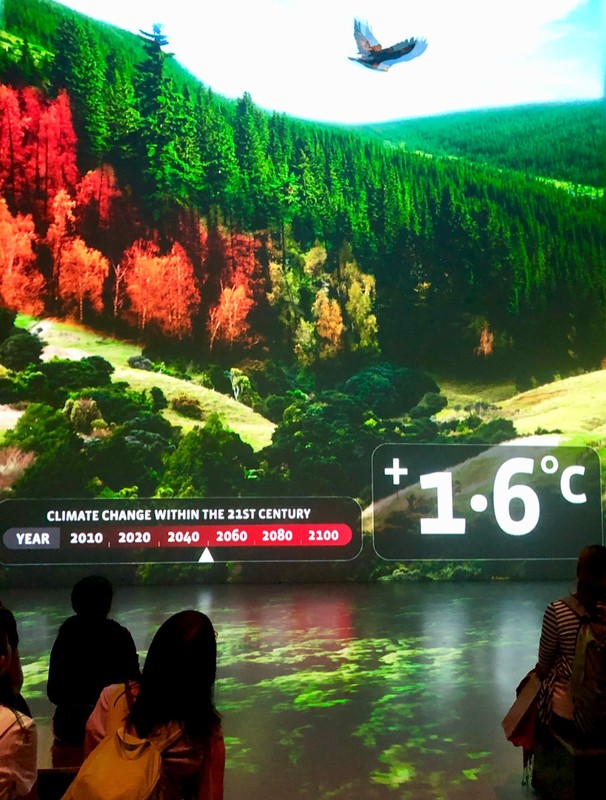 Next, I was off to see probably the most recognizable symbol of the Gardens by the Bay - the towering, artificial trees. These actually function as mammoth sized trellises, and are home to real flowers and plants the climb up their towering, conical sides. At the top, they flare out forming artificial branches that are embedded with lights for the evening light show. There is a sky walk - an elevated pathway that winds amongst their heights. It was closed due to weather during my visit (winds? forecast thunderstorms?), unfortunately. I had planned to come back in the evening for the light show, but in the end decided not to return. I have to leave something for future Singapore visits, right? 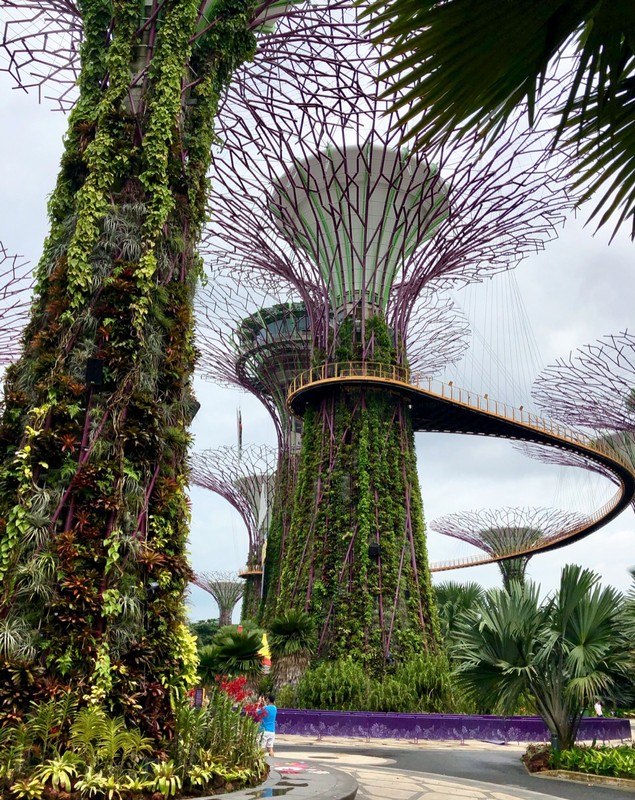 The towering artificial trees at Gardens by the Bay

The base of the artificial trees were home to a Toy Story 4 exhibit and kids area, timed to coincide with the recent release of the movie. I was a bit disappointed in this veer towards crass commercialism. Of course, the fact that the area surrounding and amongst the artificial trees was swarming with dozens and dozens of kids had NOTHING to do with my feelings, I am sure! In all, I felt this part of the Gardens was somewhat disappointing. Though with the skywalk closed and not viewing the light show, that might have something to do with it! 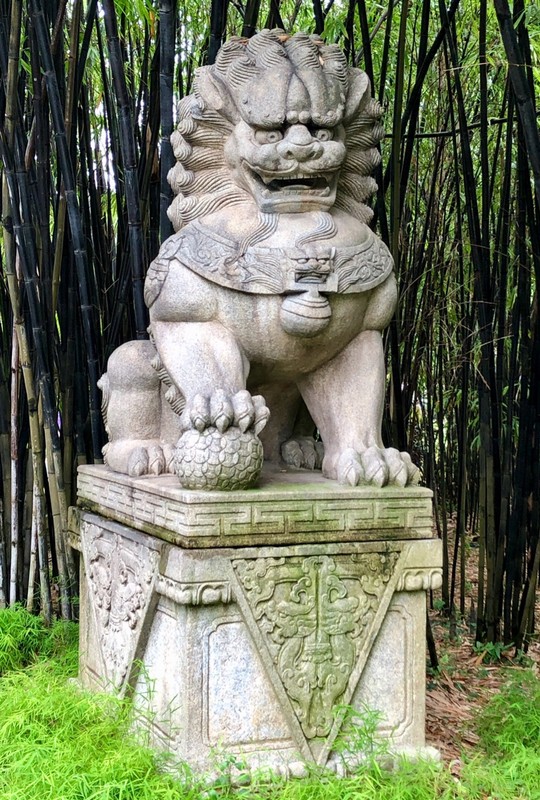 Statue marking the entrance to the Heritage Gardens

There are a number of Heritage Gardens in the park, too. They celebrate the different cultures that compose Singapore’s cosmopolitan mix. There was an Indian Garden, Chinese, Malay, and more. There are some informative placards talking about cultural medicine, food, and customs, but this part of the Gardens is definitely outclassed by the domes. Speaking of which, it was time for me to hit up the second one - the Flower Dome. I took the long way around the dome to photograph its outsides. Inside, I found it swarming with visitors - much more so than the Cloud Forest had been. 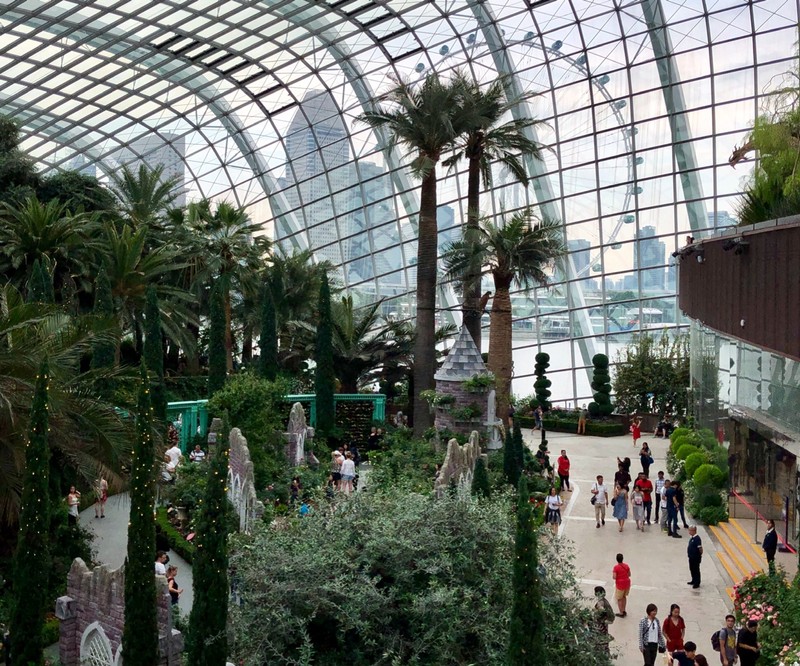 This dome was arranged by various biospheres and types of plants. These ranged from water-filled ones from desert environments like yucca and cacti, to the bulbous tree trunks like Africa’s baobab trees, to the Mediterranean climate’s flora. There was also a special exhibit on roses, so there were thousands of brilliantly-colorful arrangements of roses inside the dome. Once again, statues and other artwork were placed in amongst the plants in an eye-catching way. Many were made of wood fashioned to look like ordinary branches whose intertwined shapes just happened to resemble a dragon, leaping deer, or horses. The ones in the Mediterranean section were white plaster, flower-draped replicas of Classical Greek and Roman statues. 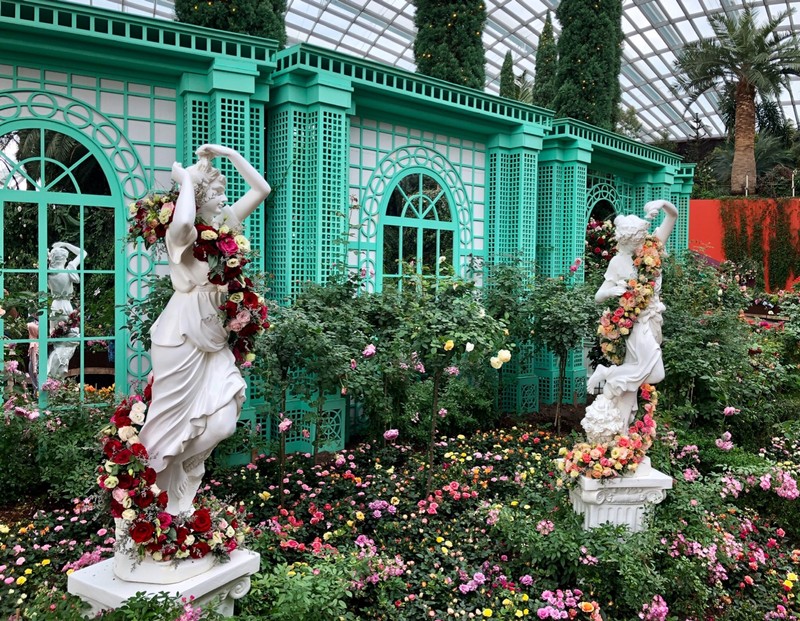 The Roman statues in the Mediterranean section of the Flower Dome

Once again, the sheer over-the-top aspect of the domes wows the visitor. Looking through the glass panes of the dome, you see downtown Singapore and the Jetsons-esque Marina Bay Sands. The displays use height to their advantage, aesthetically rather than biologically like in the Cloud Forest dome. I slowly, thoroughly worked my way through the dome. However, as the crowds grew, I found it became more and more like work. There were too many people expecting others to wait while they were photographed standing in front of this or that statue, or a particular spray of colorful flowers. I knew I was getting irritated by the press of people. Once I had seen it all, I bolted for the exit, not stopping much in the displays underneath, at the end. Once out of the dome, I made my way through the park to the nearby Bayfront MRT station. 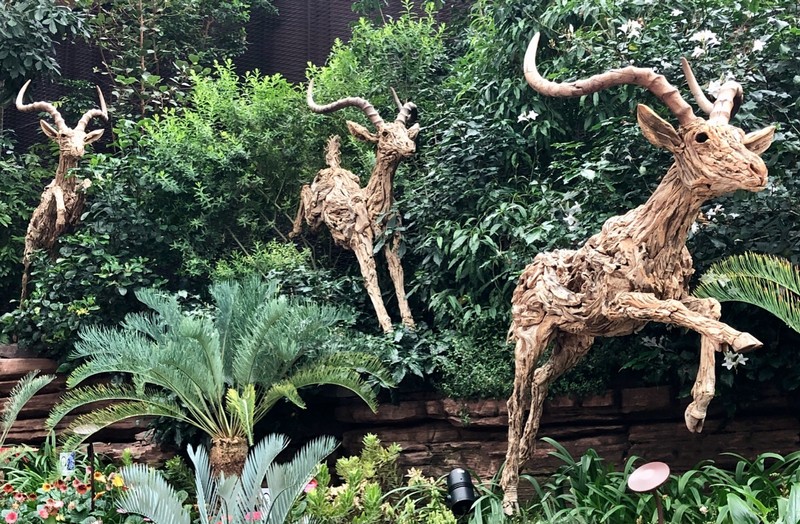 Which brings me to one of the things I like so much about Singapore - it’s top-notch public transportation system. The metro is one of the easiest and most efficient to use that I have ever encountered. And the only air-conditioned one. I am not referring to the interior of the metro trains themselves, but to the whole thing. As soon as you begin to descend on escalators from the city streets, you feel the air conditioning wafting past your face as a cooling breeze in Singapore’s tropical heat. The signage inside is easy-to-understand, and everything is clean and comfortable. Just as importantly, when you reach your destination, maps and signs help you figure out which exit from the metro you should take for your destination.

Transferring from the metro to city buses is probably one of the easiest in the world, too. I normally avoid city buses like the plague. I find it is too hard for someone unfamiliar with a city to know which stop to get off on. However, Singapore’s buses are more like trams, with designated and named stops. You can go online and print off (or save on your device) your route and simply count your stops to your stop. That is one reason I always prefer trains and trams over buses. If you pay attention, you know where you are, and how soon you need to get off. However, in Singapore, I take the buses, too. Occasionally, I will lose track and scramble to get off in time, but overall they are easy to ride. Paying for your ride is just as easy. You buy a credit card sized pass, and load it up with as much as you will need at electronic kiosks or at 7-Eleven stores. It works for all public transit, of course. 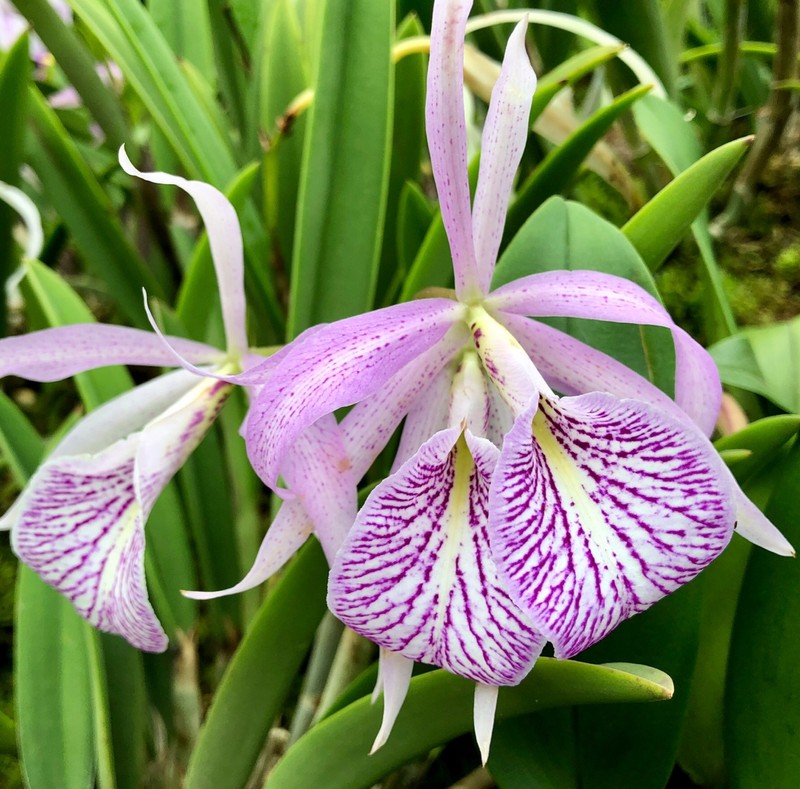 Some of the gorgeous flowers in the Gardens by the Bay

The food in Singapore is usually great, too. I visited the Indian restaurant near my hotel again for dinner. Their butter chicken and naan bread is top notch. I also love my usual Singapore hotel - the Village Hotel Katong. The rooms are large and comfortable, and there is a grocery store in the shopping center attached to the second floor. I know this entry is short on words, so hopefully the extra pictures of the Gardens by the Bay will convince you to consider Singapore as a future destination. I think it will become one of your favorites, too! 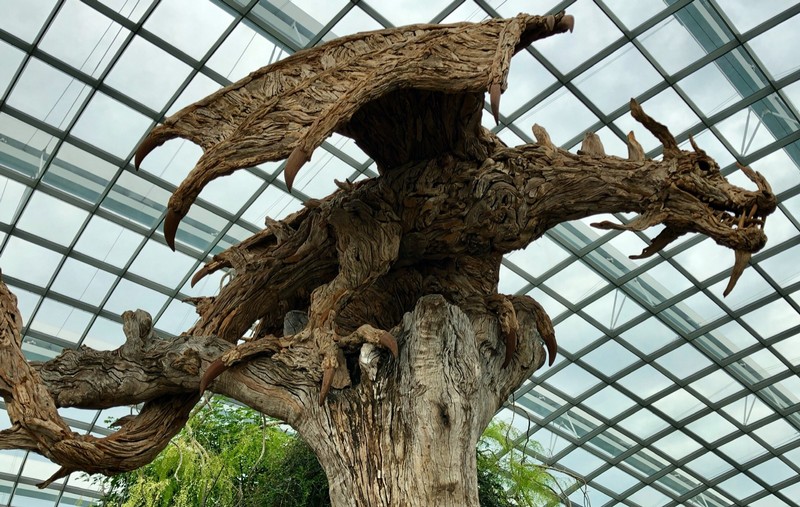 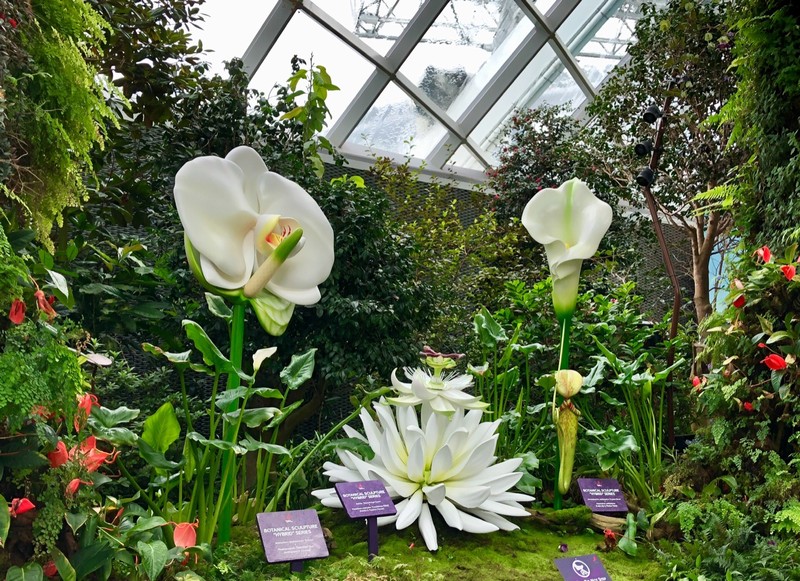 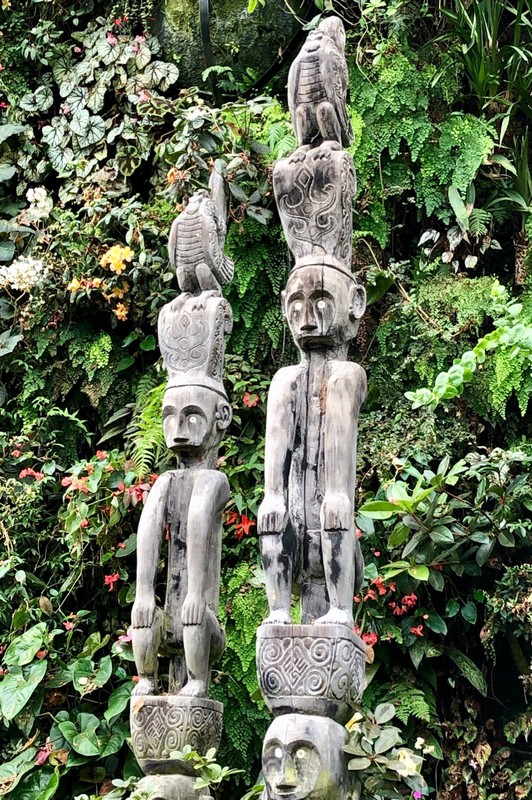 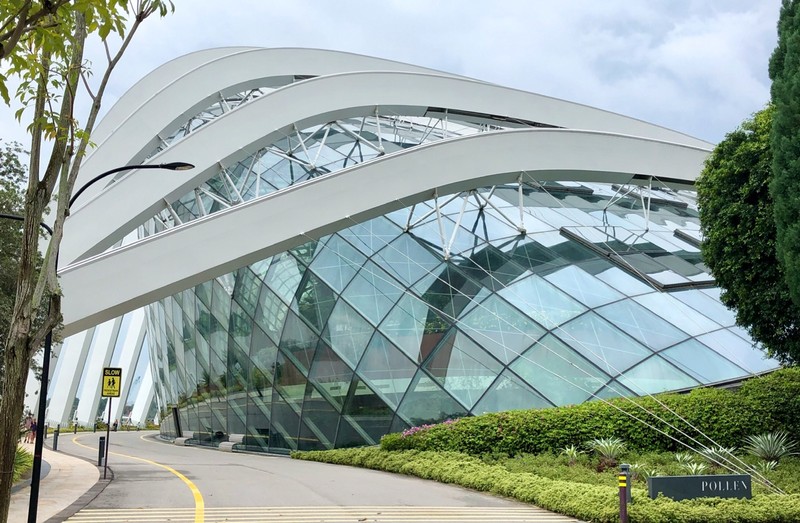 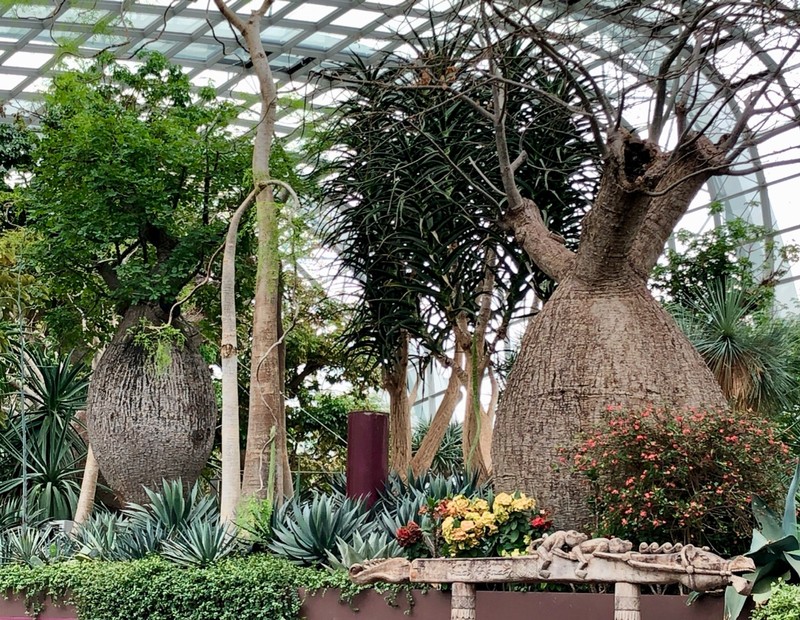 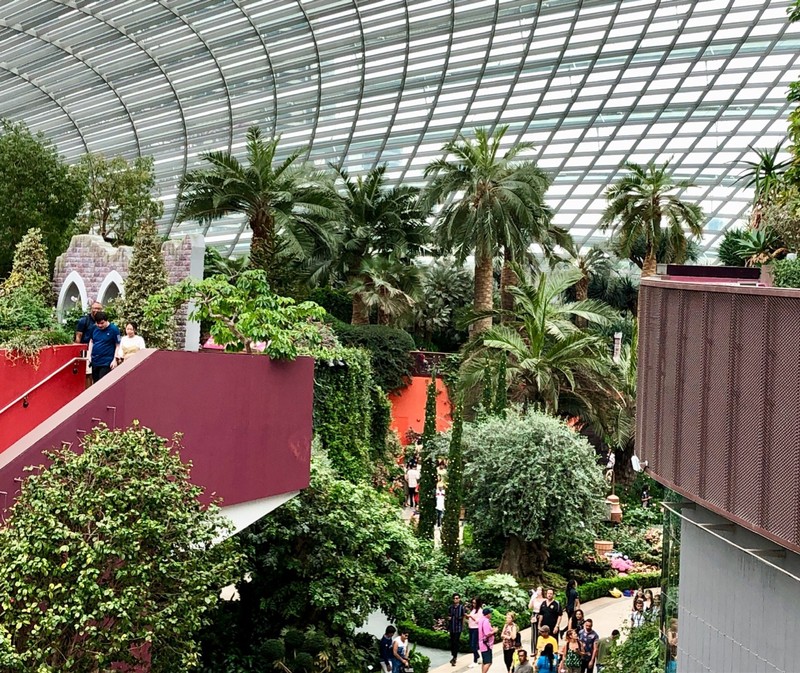 Posted by world_wide_mike 03:59 Archived in Singapore