Two Unequal Halves of a Day of Sightseeing

The key question is always “What do you want to see?” 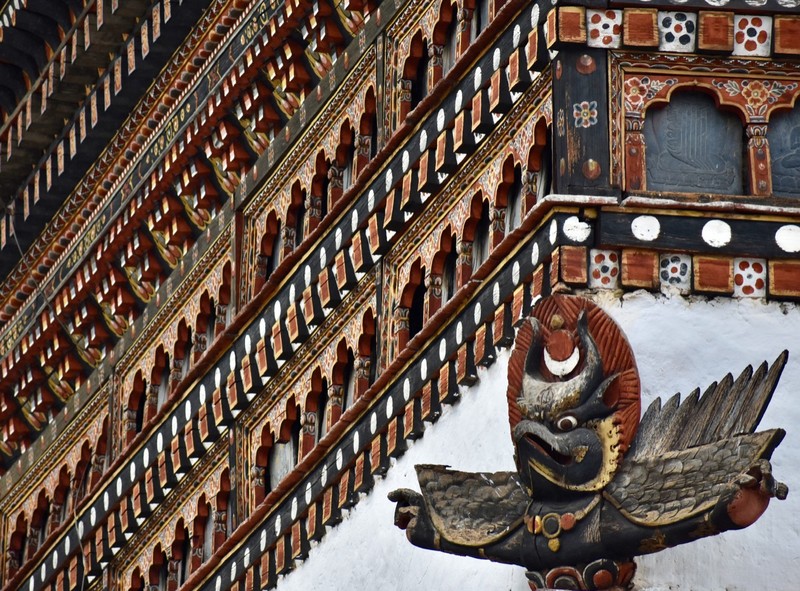 So, what do you want to see? I think, more than any other question, that is what a traveler must ask themself when planning a trip. And it is one of the drawbacks, in my opinion, of a guided tour. Although you may be able to tweak a planned itinerary and squeeze in or rearrange stops on it, you have given up essential control of what you will see. And what may excite me, may bore another traveler. That is why I have always preferred arranging my own trips, and don’t mind solo travel at all. 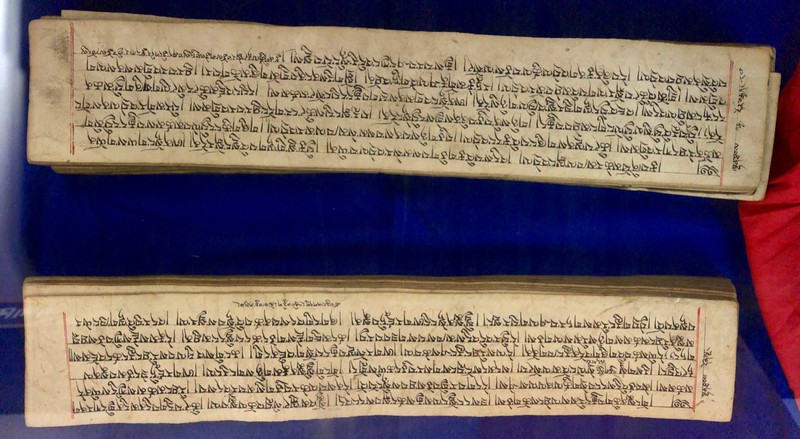 Here in Bhutan, the itinerary was basically set. Today’s stops were heavy on folk museums and cultural sights. My guide Sonam seemed surprised and a bit disappointed that our first stop, the Postal Museum, didn’t really thrill me. Bhutan is known for its colorful and interesting stamps, but this seemed less museum and more shopping stop to me. The prospect of getting your own picture (and face) on a kingdom’s actual, valid stamp may seem the coolest thing in the world to many. Not being a selfie guy, I wasn’t interested. The museum essentially consisted of four binders and a couple glass displays of past Bhutanese stamps (all of which were for sale, of course). Not being much of a shopper either, we were out of the Postal Museum rather quickly, compared to most tourists, I imagine. 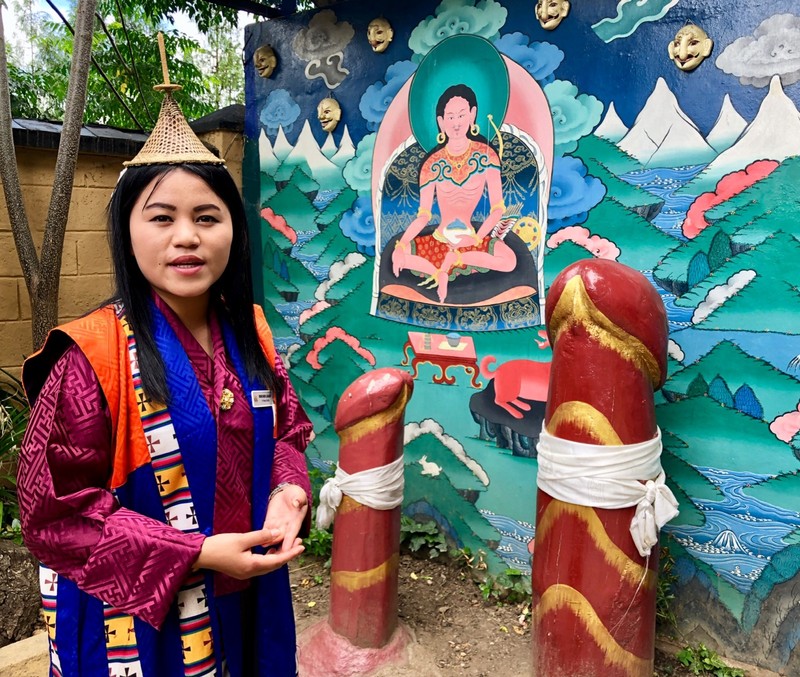 The National Library, and a chance to examine historical Buddhist manuscripts, seemed much more interesting to me. However, there were very few really old documents on display, actually. It was more of a working library for monks and Buddhist scholars to come examine and study from copies of ancient works. It was cool to see how many Buddhist tracts were wrapped up in colorful silk cloth to preserve them. But how many colorful silk bundles behind glass can you really look at? Speaking of colorful, seeing the world’s largest book - a very colorfully printed examination of animal life in Bhutan - was neat. But it was also behind glass for safekeeping, with only one set of pages on display. 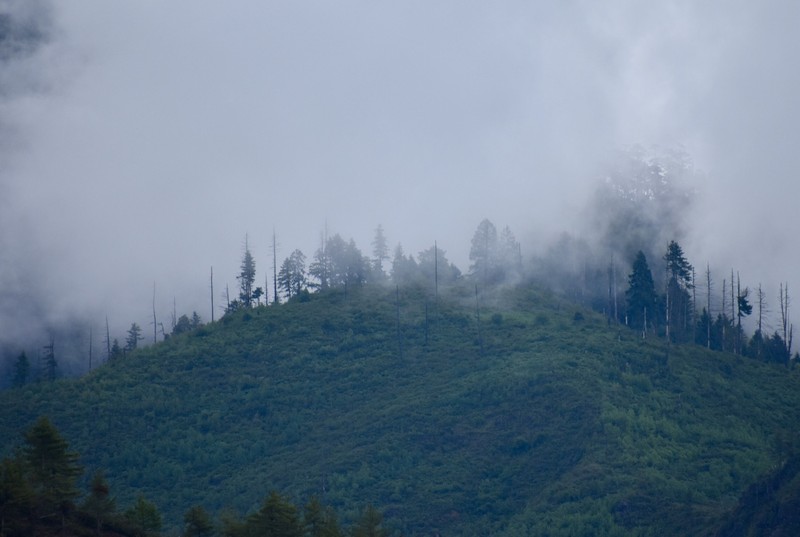 The Land of the Thunder Dragon means, well, occasional thunderstorms

Our next stop was the Folk Heritage Museum, which are always hit or miss with me. The no photos rule was an immediate strike, and the displays of tools and household implements were very static. Sonam tried to inject life into it, but the best part was the chance to climb around inside of a reconstructed three-story, traditional Bhutanese home. A later stop in the morning, called Simply Bhutan, was much more interactive, though it was essentially a repeat of information. Each visitor to Simply Bhutan was assigned a young, dedicated Bhutanese guide who explained everything thoroughly. You had a chance to taste the traditional alcohol, Ara, and shoot a traditional Bhutanese bow. There was a lot more life in this stop, though they both covered the same topics. 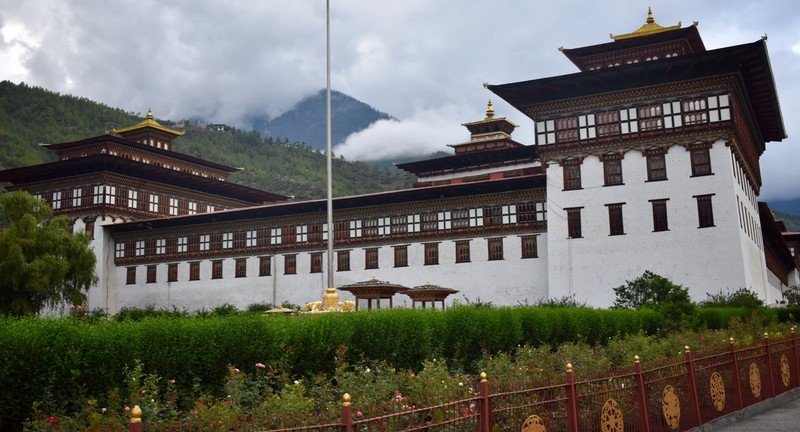 After lunch, we drove high in the hills overlooking Thimphu for a scheduled scenic overlook of the city. They day had dawned warm, clear, and sunny, which had delighted me as every day’s forecast showed unending thunderstorms. While eating lunch at Simply Bhutan, though, I heard my first crack of thunder in the Land of the Thunder Dragon. Sure enough, by the time we arrived atop the hill, a steady rain had set in. Clouds all but obscured the city below. We waited a few moments for it to stop, but another rumble of the dragon convinced us that this stop was a bust. There was little else to do except have them drop me off at the hotel before picking me up for the late afternoon portion of our tour at 4pm. I stretched out on my bed and napped, wishing I had urged Sonam to rearrange the stops that morning and do the viewpoint right away since it had been sunny. 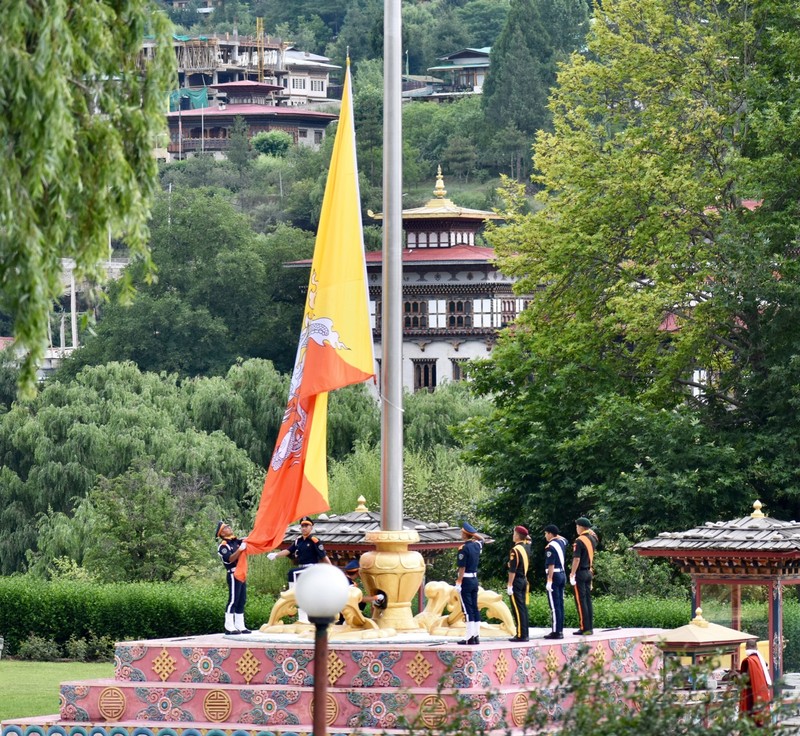 Pomp and circumstance at the flag-lowering ceremony

The sun was out again when we set out for the day’s highlight - a visit to Tasiche Dzong. A dzong is a combination fortress and palace, with this one being the actual, working center of government. The king and religious leaders have offices here, as do the nation’s ministers. Since it is a working administrative office, it doesn’t open until 5pm (or as we found out, until the last minister closes up his office and goes home). Beforehand, though, is a flag-lowering ceremony, which we could see through the fence. A color guard lowers the huge Bhutanese flag flying in front of the dzong with pomp and ceremony, attended by three Buddhist priests. 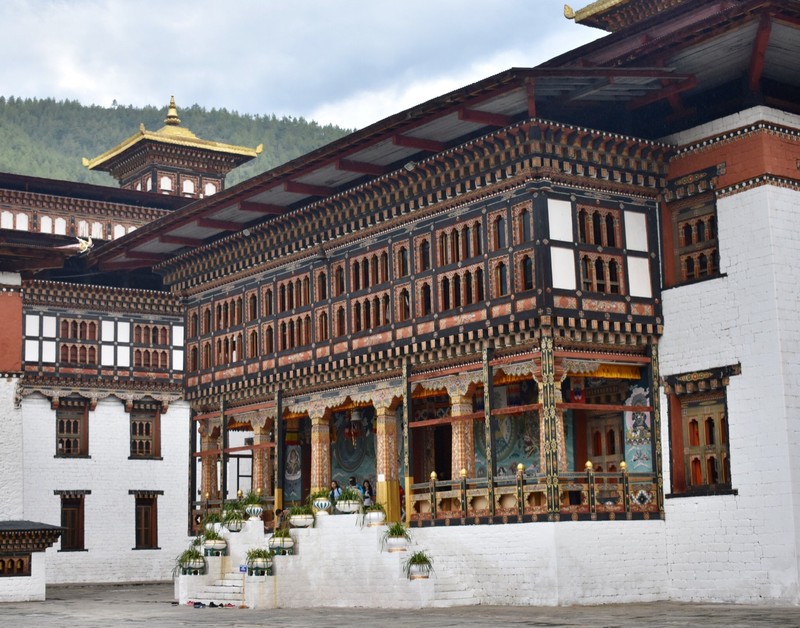 The main temple at the dzong, where royal weddings and coronations are held

Remember when I said things that may excite one person may bore another? Most of part one of the day’s sights had fallen flat with me. However, the palace was right up my alley! Bhutanese architecture is colorful and decorative in even ordinary homes. However, they pulled out all the stops for the dzong, and it was encrusted with carvings and paintings that overwhelm the eye. Entering the courtyard, the visitor is surrounded by a visual feast. Sonam started me off in the complex’s main temple. No photos were allowed inside, I was told to my disappointment. Otherwise, the temple was gorgeous. 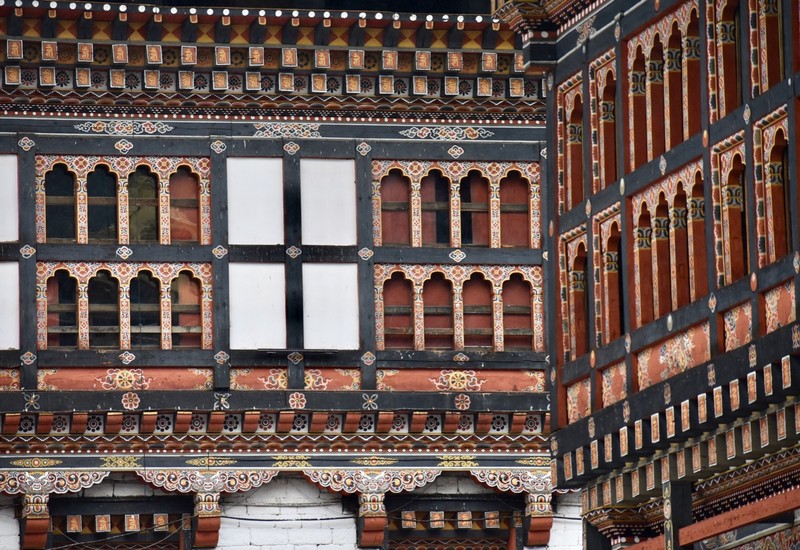 Sonam pointed out and explained the meaning of the statues and paintings. This temple is where royal coronations and weddings were held. Both he and our driver seemed awed to be there, and the reverence sunk in. A guard patrolled the interior to make sure I or the other visitors weren’t tempted to sneak in a photo (trust me, I was!). Even when we stepped back outside, and Sonam explained the facade of the building (where pictures were allowed), I was reminded not to try to sneak an interior shot in by including the open doorway in my focus. Trust me, I had every intention of doing that - darn! 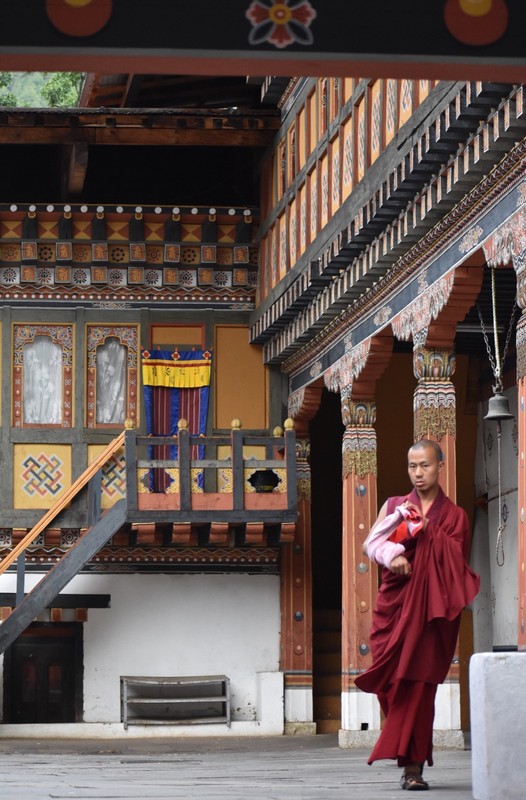 A monk prowls an inner courtyard of the dzong

In such a sprawling complex, the temple was the only part of the interior we were allowed to visit, I was told. I was free to roam the courtyard and photograph the exteriors of the sumptuous buildings, though. At this point, I took off on my own and roamed the complex. I photographed the other buildings, the long covered hallways leading between them, the statues and carvings covering nearly every foot of their walls, and the tiny courtyards I could glimpse past gateways. Half of the palace is devoted to the religious officials and the other half to the secular ones, led by the king. Monks roamed the complex in their deep, almost burgundy colored robes. All officials and civil servants wore their ceremonial sashes (my guide and driver had donned their’s prior to entering).

Carvings watch over a doorway

I am sure I spent much more time photographing the dzong than the average visitor. The dozen or so other tourists who had entered when we did were long since gone. But the sheer aesthetic joy of lining up different angles and unusual shots excite the artist in me. Remember: what do you want to see? My visit to Tasiche Dzong is the kind of thing that tingles my travel nerve. Others may have popped in and out, as I did in the Postal Museum, earlier. But when you get to that sight you’ve been longing to see, devour it, make it last, save every moment. 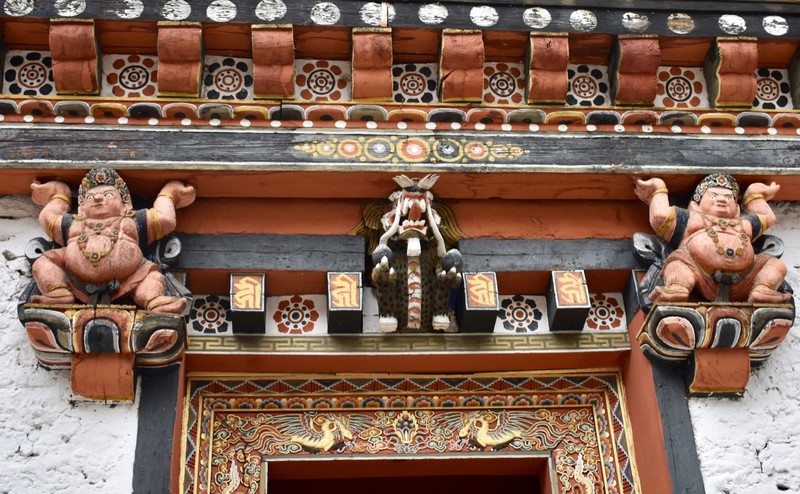 Posted by world_wide_mike 08:47 Archived in Bhutan