Retracing my Steps to Paro, Bhutan

Abbreviated day of sightseeing takes in temples and dzongs 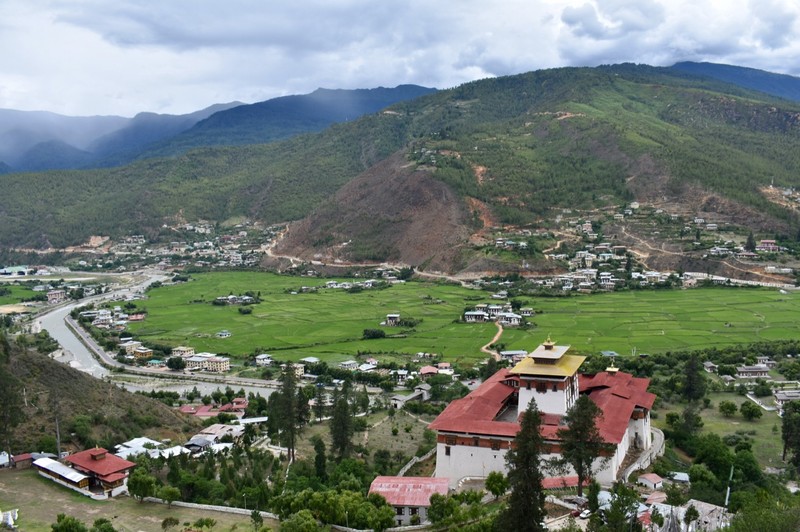 The Paro valley stretched out below its dzong

Even with six days in Bhutan, I was covering only a small slice of this 200-mile wide mountain kingdom. What’s more, the country’s limited road network and only one international airport meant that travelers are bound to retrace their steps, sooner or later. Today was my day. We drove from Punakha to Thimphu, and on to Paro, where the airport is located. Though I saw a lot of countryside, the scenery was pretty much a repeat of day’s one and three. 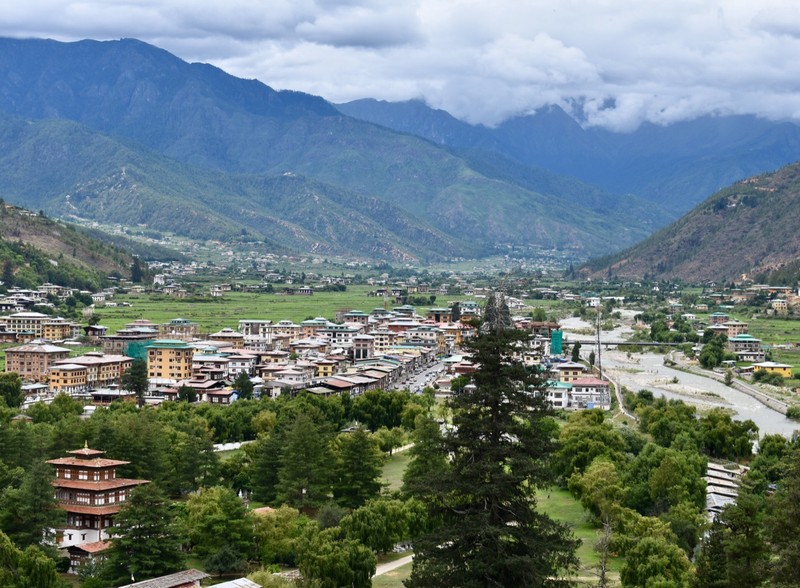 Paro Valley, hemmed on on all sides by high hills

Once in Paro, we had lunch, then began our half day of sightseeing. This started at the National Museum, or more accurately, the stand-in for the museum which is being renovated after a fire a few years ago. It is now housed in a stone building just steps away from its former location, a round medieval watchtower located atop a hill overlooking the Paro valley. 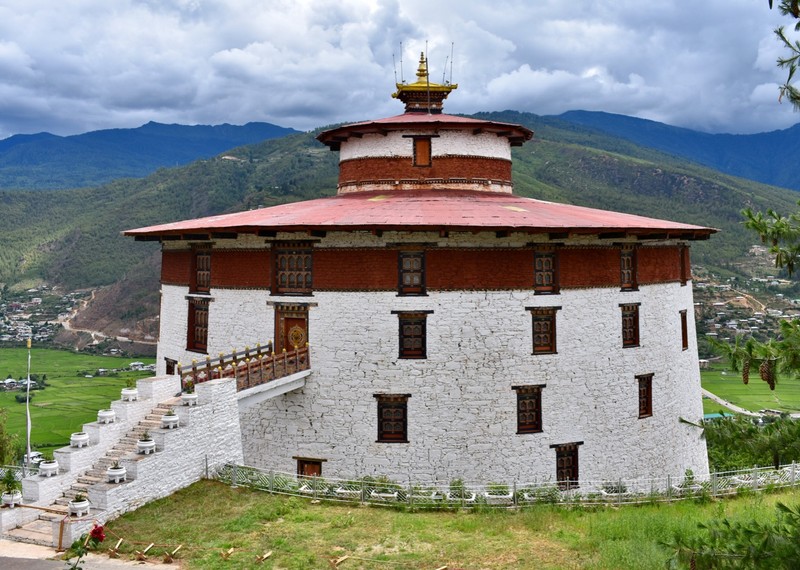 The round medieval watchtower that normally houses the National Museum

It is a small museum, with only three rooms of exhibits. The best is the first room with the masks that are worn in cultural dances covering the walls. The masks are grouped according to the dances they are used in, and well labeled in English. There is a placard explaining the origin and purpose of each dance, and what the masks are meant to represent. In addition, there is a decent video running every five minutes showing the dances being performed, with commentary. 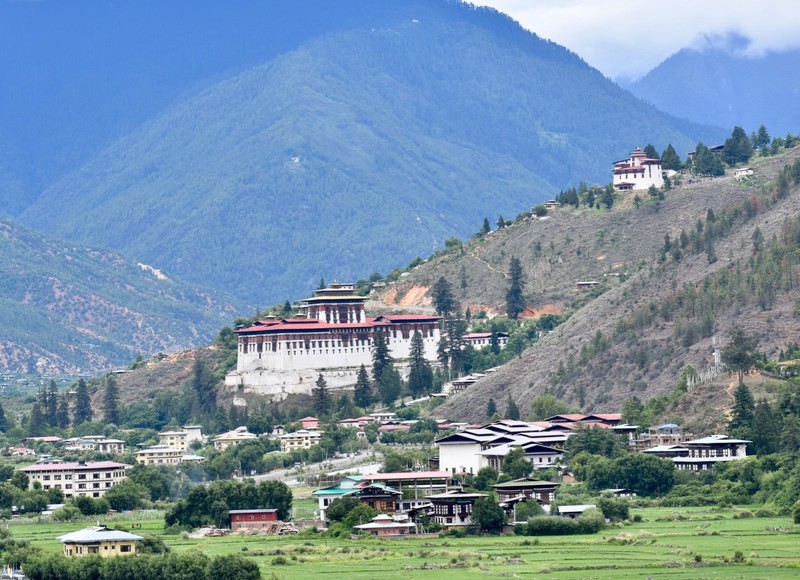 The watchtower and dzong share a hillside overlooking the town

The second room is merely photographs of Bhutan’s kings, while the third covers the animal and plant life of the country. There are a mix of photographs and taxidermy (complete animals, or their heads for larger ones). The information is good, and it is arranged by Bhutan’s very vertical climate system or habitats. It doesn’t take long to work your way through the museum. Afterwards, we walked down to look at the watchtower, whose exterior is in great shape (must have been mostly interior fire damage). We were supposed to hike down to the dzong next, but Sonam got spooked by the rain clouds rolling over the hilltops at the far end of the valley. So we drove down. 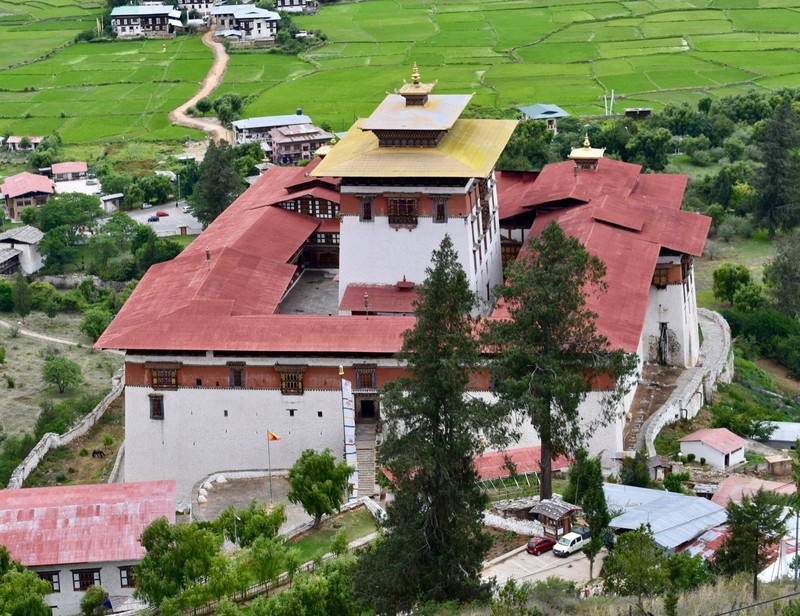 Looking down at the fortress dzong from the watchtower

The dzong was the smallest of the three palace fortresses I saw in my time here. It was also the quietest, with a half-dozen tourists and mostly just monks in residence. Once again, no photos were allowed in the temple, which was the only building we were allowed inside. As usual, I was free to explore otherwise, making a circuit of the interior walls and courtyards. The decoration was amazing, as always for Bhutan’s historic dzongs. I probably spent the least amount of time here of the three, but it was also the smallest. Or perhaps I am getting “dzonged out!” 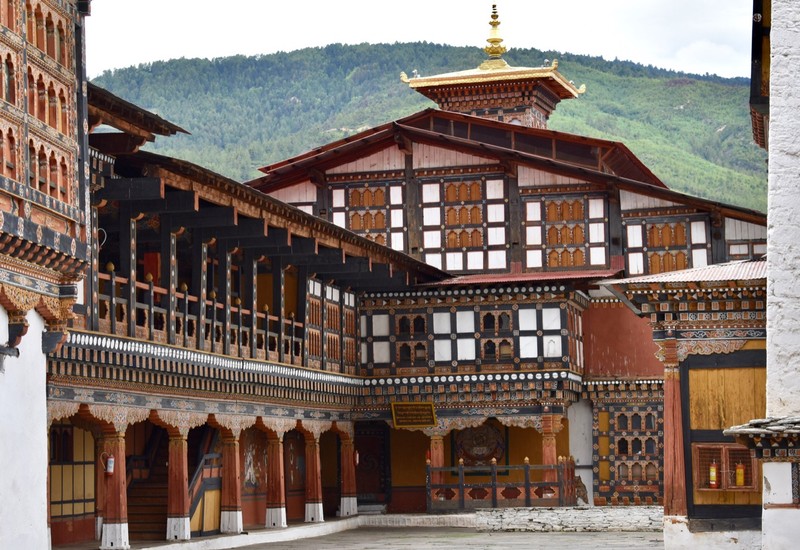 The interior courtyard of Paro’s dzong

From there, we drove to one of Bhutan’s oldest temples, Kichu - built in the 7th century, according to Sonam. Apparently, it was constructed by a Tibetan king who built 13 temples in Bhutan in all. The coolest part about it was the active service going on when we arrived. The monks were droning their prayers and there was, I believe, recorded music accompanying them. It was very small and somewhat claustrophobic inside, with all of the worshippers, bowing and prostrating themselves. The monks were scurrying around dealing with all of the offerings of food and money being left by worshippers. I did my best to stay out of the way. 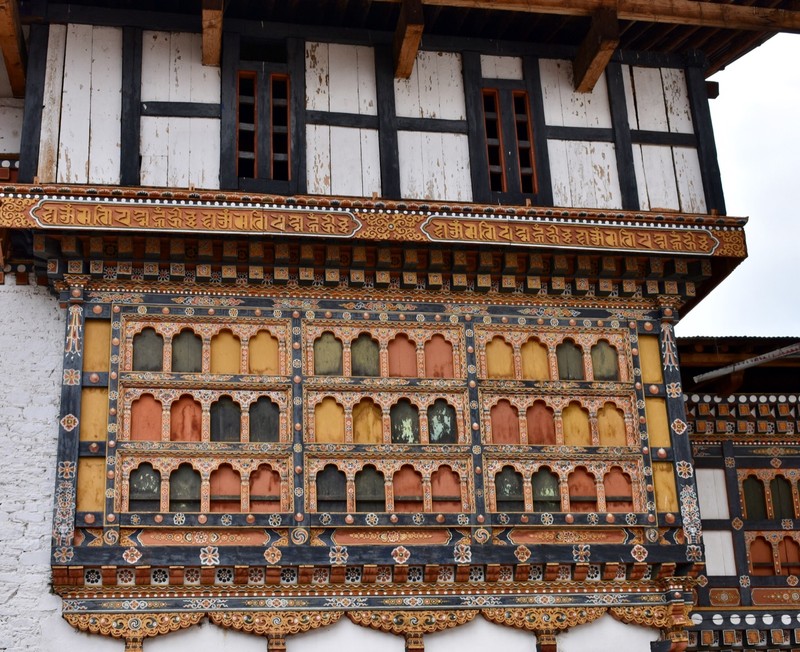 The temple did look older, and had different types of statues than the others I’d seen, so far. More bronze, and almost Hindu looking, with multi-armed goddesses. In an even smaller side chapel built less than 200 years ago, another service was going on. About a half dozen monks were chanting in unison. Suddenly, I saw two get out their cell phones (yes, Buddhist monks across the world seem to carry them). My first thought was, “Ah-ha! Monasteries are having the same problems with cellphones as teachers!” When I circled back around I saw that I was wrong. The monks had been pulling up an app that had the chant listed. They were reading from their cellphone screen - technology changing the way an ancient religion is performed! 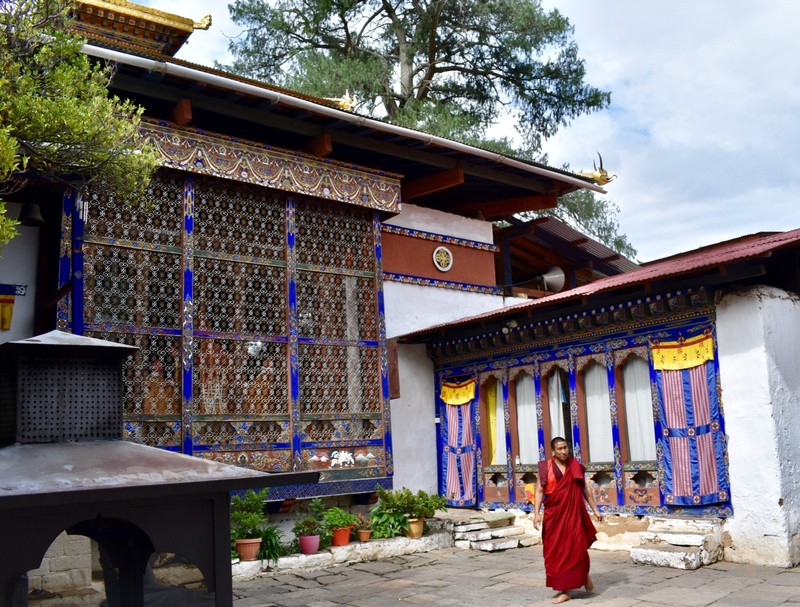 That wrapped up the day’s abbreviated sightseeing. I was driven to my hotel - The Tiger’s Nest Resort - and checked in. My room did indeed have a view of the cliff face where the monastery is located. That was the good news. The bad news is it is a 10-minute drive out of town, and neither my guide nor driver are staying here. So. I am kind of marooned out here. The grounds and view are beautiful, yes. But I was actually planning on doing some shopping tonight since Paro is kind of a handicraft headquarters in Bhutan. Driving through town today I saw tons of shops. Plus, there is a microbrewery here! Will I be retracing my steps into town tonight via taxi? Hmmmm... 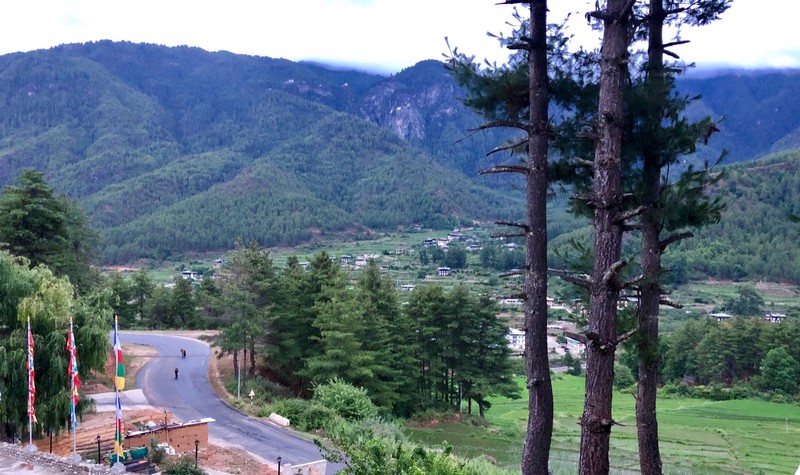 Dusk falls, looking out the window of my hotel room at Tiger’s Nest Resort

Posted by world_wide_mike 06:07 Archived in Bhutan