Hiking to Tiger’s Nest is a Thrill for the Soul 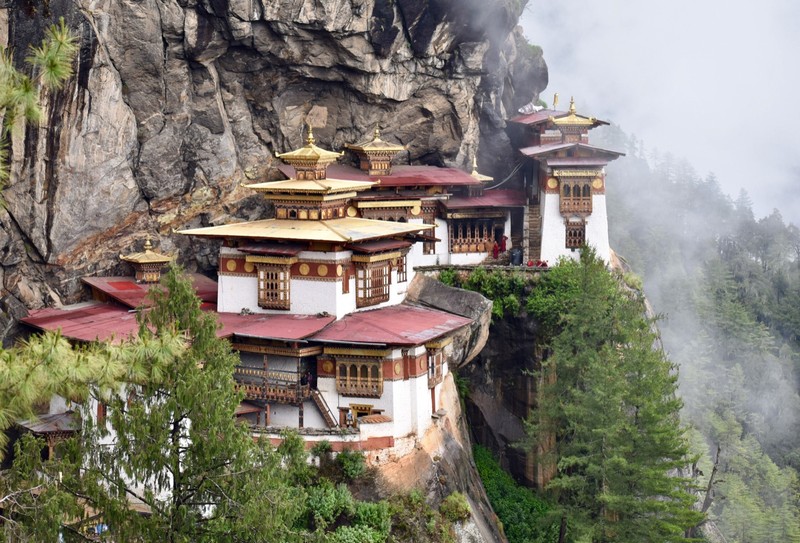 There are those world-class sites, that when you first glimpse them with your own eyes, stop you in your tracks. I was on a rough, stone staircase leading to Tiger’s Nest Monastery in Bhutan. My guide went ahead, not noticing me frozen in place. “This was why I came here,” I mumbled to myself. A lump rose in my throat as I said my thanks for being able to see another amazing place in our world created by man. 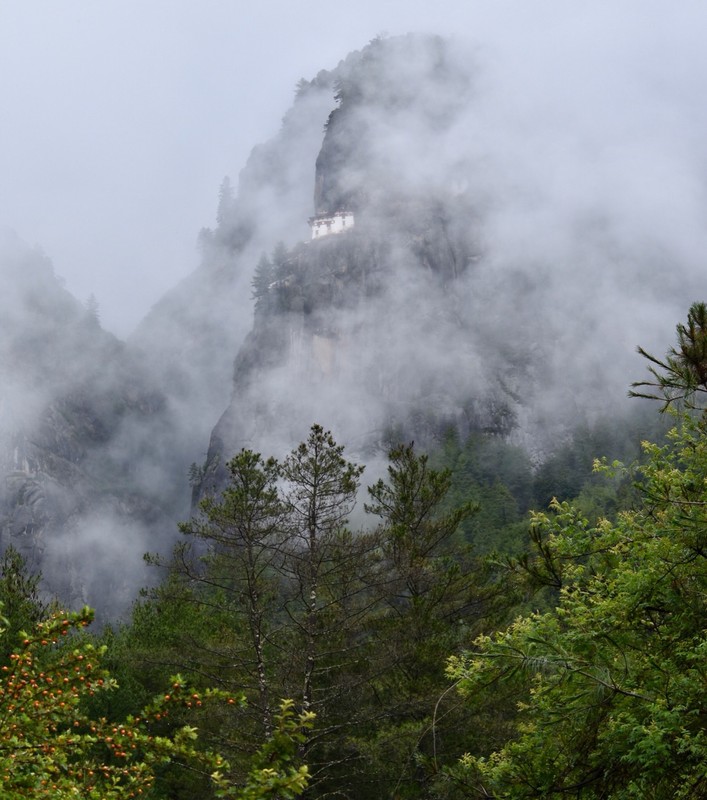 Looming high up in the mist, Tiger’s Nest is worth coming to Bhutan to see

It was images online of Tiger’s Nest that convinced me to choose Bhutan as a destination, months ago. Everything about the country sounded intriguing - it’s difficulty in actually getting there, the relatively few amount of tourists allowed in, and its unique embrace of Buddhism in creating its modern world. It does not measure Gross National Product, but instead created its own Gross Happiness Index. It had been difficult to get here, and expensive, as well. But as I raised my camera and began taking pictures of the gorgeous white, red, and gold buildings, I knew it had been worth it. 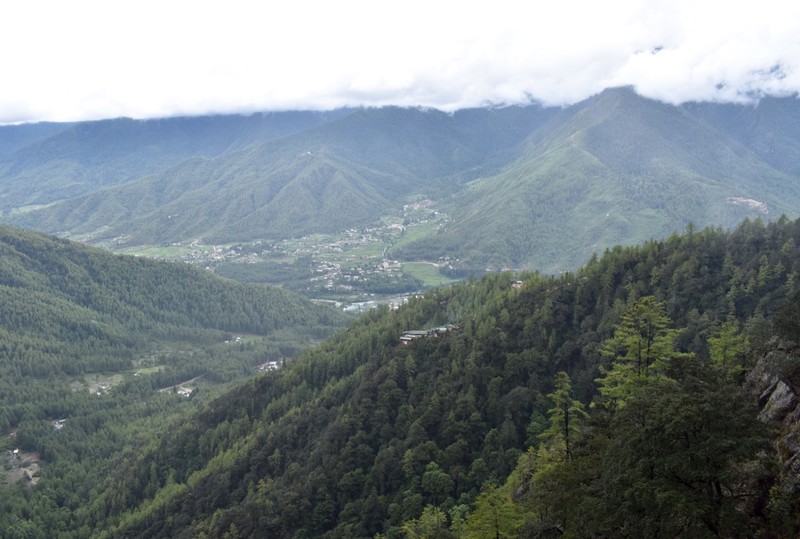 It had also been worth the climb. I woke up almost two hours earlier than I had planned, so anxious about my visit was I. I was praying for sunshine, or at least not pouring rain. I wasn’t sure if they’d cancel the hike if it was storming. The path was mostly mud and rock, and I imagine could be treacherous if it became a river. After showering and getting ready, I held my breath and opened the curtains of my hotel room windows. My second story room had a great view of Tiger’s Nest. Paro is in a valley hemmed in by tall, forested hillsides. I could see clouds drifting across the hillsides, and a gentle rain falling. The hills were not completely socked in with clouds, though. The fact that I could see the hillsides at all, and the entire valley was not fogbound, was good news. 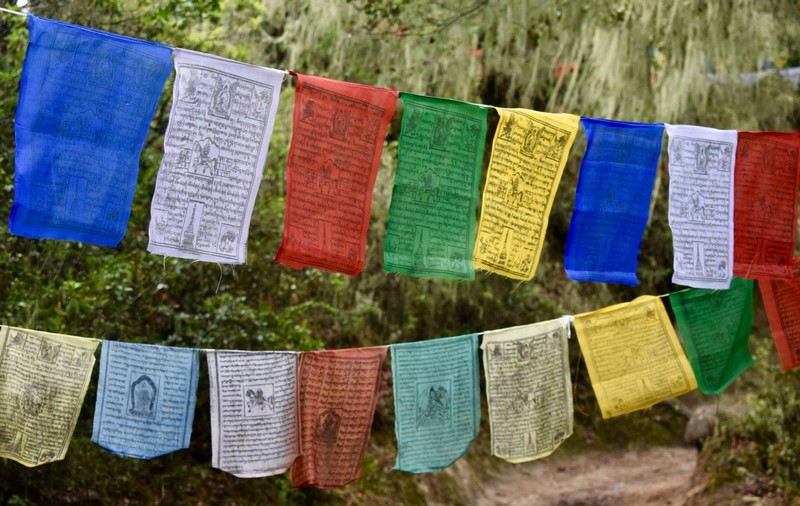 Prayer flags are a common sight everywhere in Bhutan, including the trail on the hike

At 7am, I walked downstairs and out the front doors of the hotel to see if anything had changed. The rain had stopped, and it seemed to be getting steadily lighter. I ate breakfast, and went back up to the room to begin preparations for my departure tomorrow. My guide and driver were picking me up at 8:30, so I drifted back downstairs at 8:15 - I have made it my goal to be early every morning. To my surprise, my guide Sonam and driver Niwas were having coffee in the lobby. They’d beaten me, for the first time all trip! 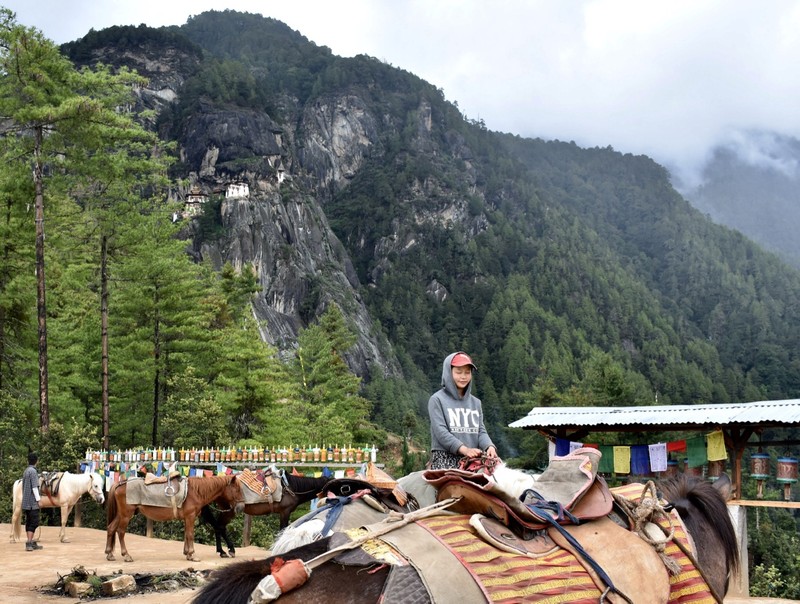 Slackers, er tourists, mount up on horses to cover half the hike to the monastery

The drive to the trailhead took about 15 minutes, the road narrowing and become more potholed as we climbed. We passed strings of horses going the same direction. Sonam told me that some tourists ride horses halfway up, and it was obvious he disapproved. As we began our hike we talked about it more. I agreed that it kind of defeated the purpose to ride a horse on a hike. Plus, going to a monastery is somewhat like a pilgrimage. And pilgrimages are meant to be walked, to suffer physically for your spiritual quest. You could argue that if you’re a non-Buddhist like me, what does it matter? Sonam and I were of the same heart on this, though. Besides, horses on the trail meant watching out for poop going up and down! 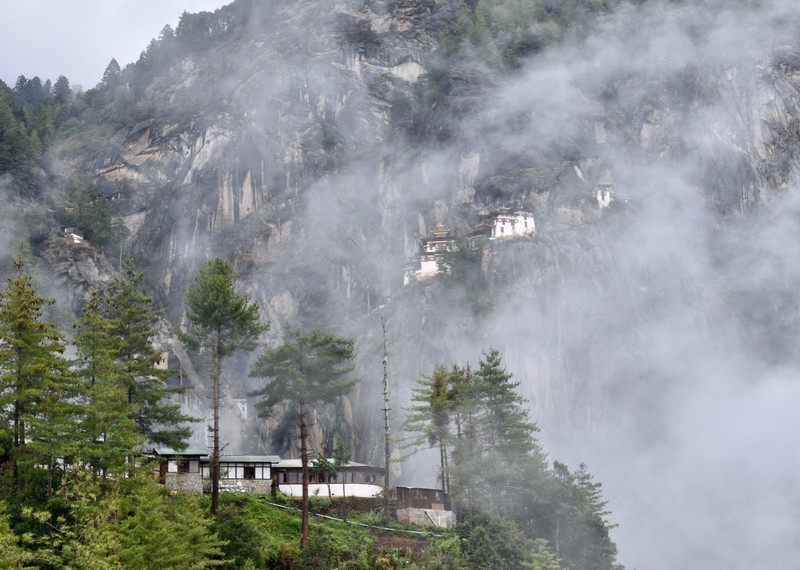 The cafe at bottom left, with the monastery looming in the mist above it

The day was foggy and damp, and clouds drifted up and across the hillside as we hiked. Sometimes, Tiger’s Nest was cloaked in mist, other times it shone clear, beckoning us upwards. Within 15 minutes, I shed my rain coat. It was very humid, and I began to sweat freely. My pace didn’t slacken, though, and Sonam said we were making good time. It was two hours up, and two hours down. At the halfway point of the climb would be a cafe, where we’d rest and have refreshments. 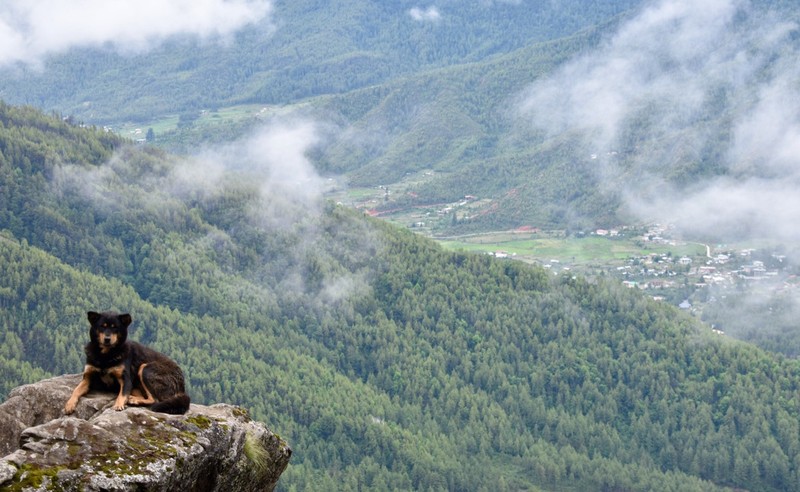 I took photos as we continued upwards, either of the monastery coming slowly closer, or of the views down below as we hiked higher and higher. Seemingly stray dogs are everywhere in Bhutan, and this hike was no exception. Some of them were even perched on rocks with amazing views beneath them. Do dogs appreciate beautiful scenery, too? In Bhutan, they appear to! We encountered few other hikers, perhaps our early start or the intermittent clouds were the reasons. We did encounter Gray Langur monkeys, lounging high in the cloud forest trees, though. Sonam spotted them first, and declared it good luck (or at least that is the tradition in Bhutan). As I zoomed in on them with my telephoto lens, I agreed wholeheartedly. 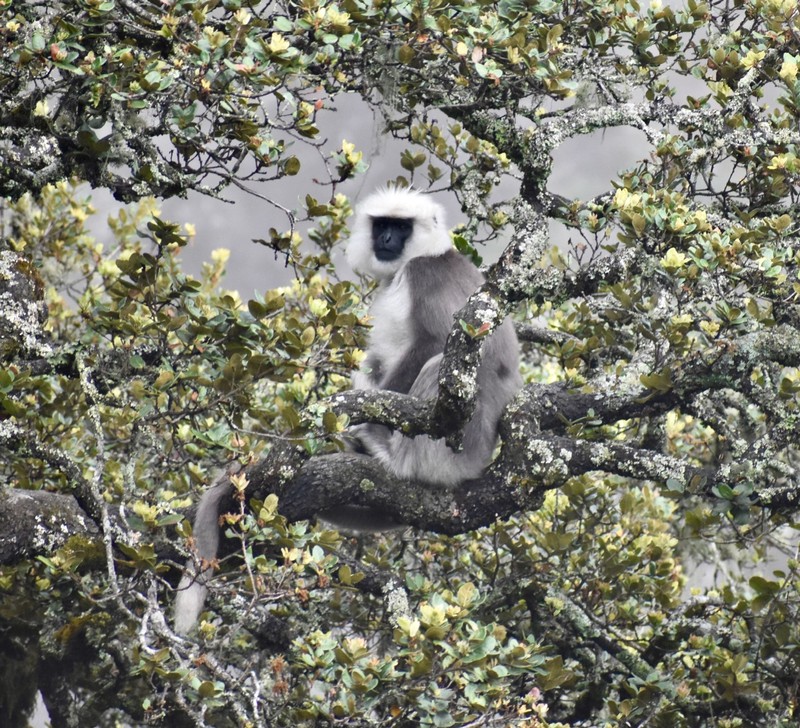 Spotting a Gray Langur monkey is good luck, according to Bhutanese tradition

Spanish moss appeared on the trees, too, at a certain elevation as we climbed. The fog and lichen and moss-encrusted trees gave the surrounding forest a magical appearance. We passed prayer flags, alternating in blue, white, red, yellow, and green. You see strings of them everywhere in this Buddhist kingdom. Some have been hanging in the weather so long they are faded to white, the prayers written on them long since faded away. Eventually, we came to a tall pole affixed with red prayer flags. Sonam had pointed it out to me yesterday from my hotel where we could barely make it out high near the summit. This was our highest point in the hike. From here, we would actually descend slightly to the bridge that led to Tiger’s Nest. 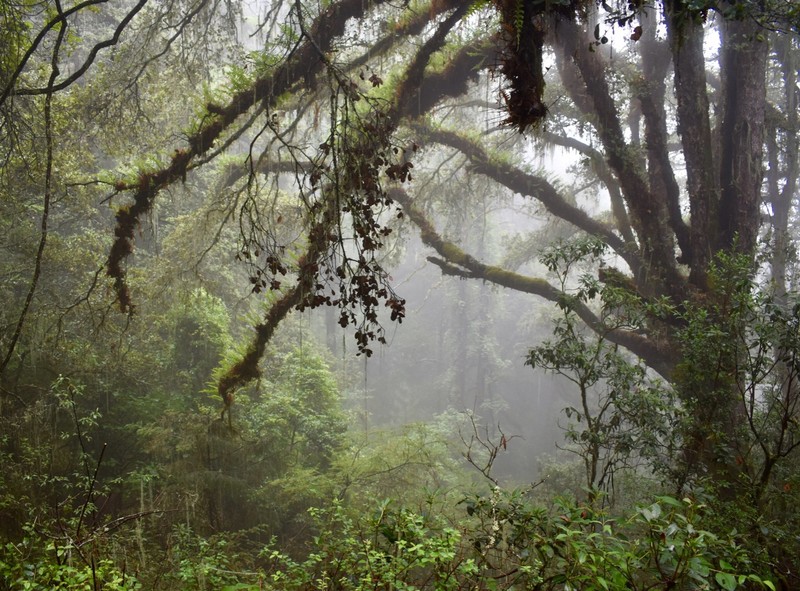 Lichen and moss hangs from the trees, giving the hike a magical feel

We stopped for awhile, though, and enjoyed the view. Sonam said this is the most famous view of the monastery buildings, but I would find dozens of stupendous viewpoints as we got closer and closer. A short time later, we rounded a shoulder of the mountain and came to the rough, stone stair. Here is where I froze in my tracks. There, slightly beneath us, Tiger’s Nest stood proudly in all its glory. My pace slowed to a crawl, as my eyes drank in this world-class sight and every nerve in my body thrilled to the experience. 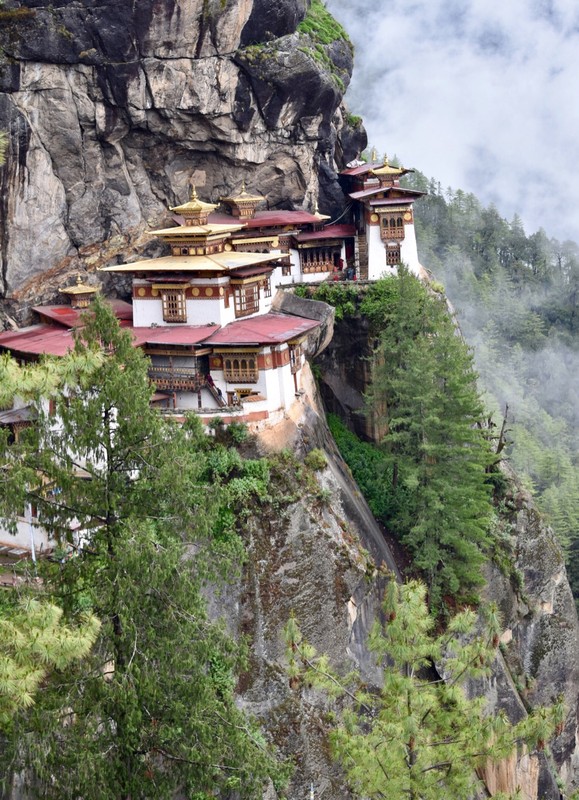 The hardest part of the hike, in my opinion, actually still lay ahead. The monastery is at more than 10,000 feet elevation, and the stone staircase leading up the final hundred yards kicked my butt like no other part of the hike. It was the altitude, I knew, but it was humbling nevertheless. One of the coolest parts of exploring the monastery buildings was the service going on in one temple. Two dozen monks chanted their prayers in unison, with older monks beating drums and blowing long trumpets. The monks were of all ages, from the elderly priest who led the chant to elementary school age boys. All were dressed in their deep, burgundy-red robes. Sonam was obviously moved to be there and prayed and prostrated himself in every building. 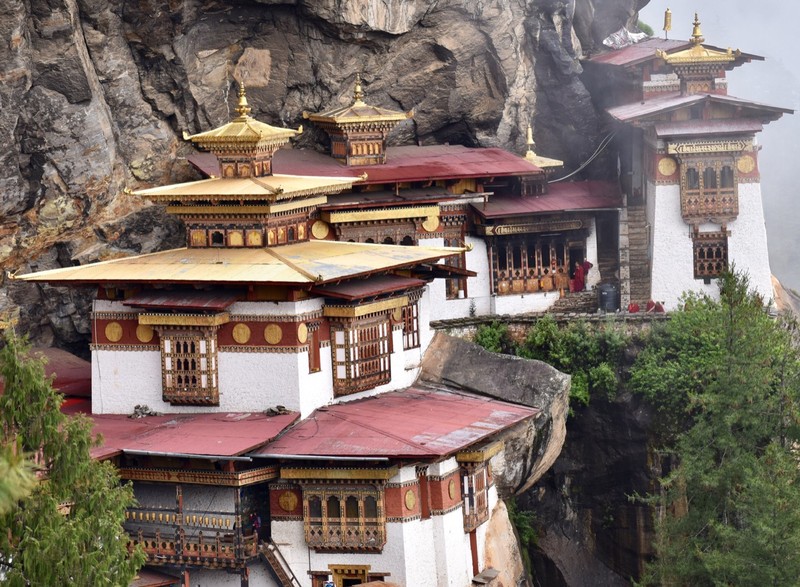 Buddhist monks visible in front of the right hand buildings, enjoy the views from a railing

After we had explored the monastery - as much as we were allowed to - and enjoyed the amazing views, we began our trek down. The rain started about halfway down, and came and went all the way till the end. Going down was trickier, easier to lose your footing. Luckily (thanks monkey!), neither of us fell. For some reason, the way down seemed to take longer, and I was happy when we reached the parking lot. On the climb I had talked Sonam into stopping at the brewpub in town that I’d found out about yesterday. What better way to reward yourself for more than four hours of sweat and exertion than in a cold beer? I was tired of the traditional lunches I had eaten the previous four days, and pub grub would be a welcome change! Not that I am complaining - my tour with Bhutan Exist Tours and Travel had arranged a great tour for me. They were always available to answer questions and I’d highly recommend them: http://bhutanexist.com/ 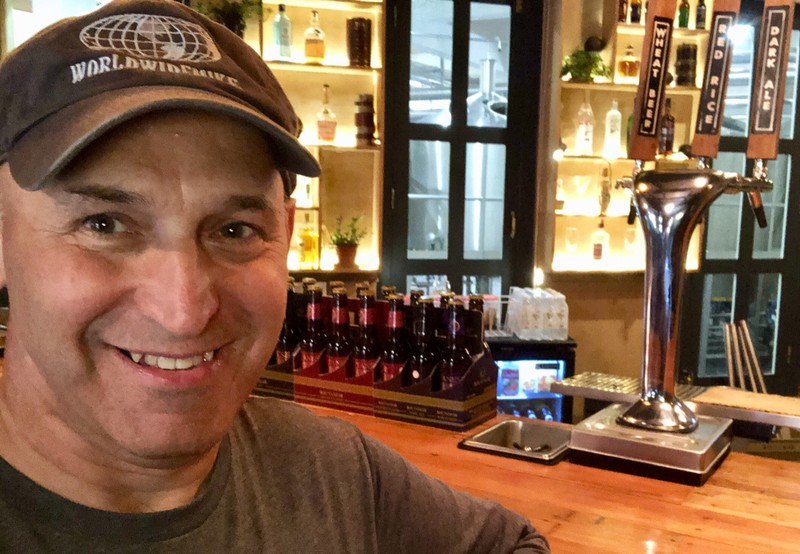 At Namgay Artesianal Brewery in Paro, Bhutan - a reward for a tough hike!

After lunch, Sonam helped me shop for souvenirs, then took me to one last dzong, nearby. He said it wasn’t open and was still being renovated, but it looked pristine on the outside. Drukyul Dzong was built in the 16th century and was instrumental in Bhutan’s defeat of a Tibetan invasion. I couldn’t get too excited about it because, for me, I had already experienced my high point of the trip. When I came face to face with Tiger’s Nest lording over stupendous view’s high above the valley, I had seen all that I needed to see. Bhutan had been a great trip and worth the trouble to get here. However, the memory of Tiger’s Nest will stay with me forever, and of the grueling hike across rock and mud to get there. 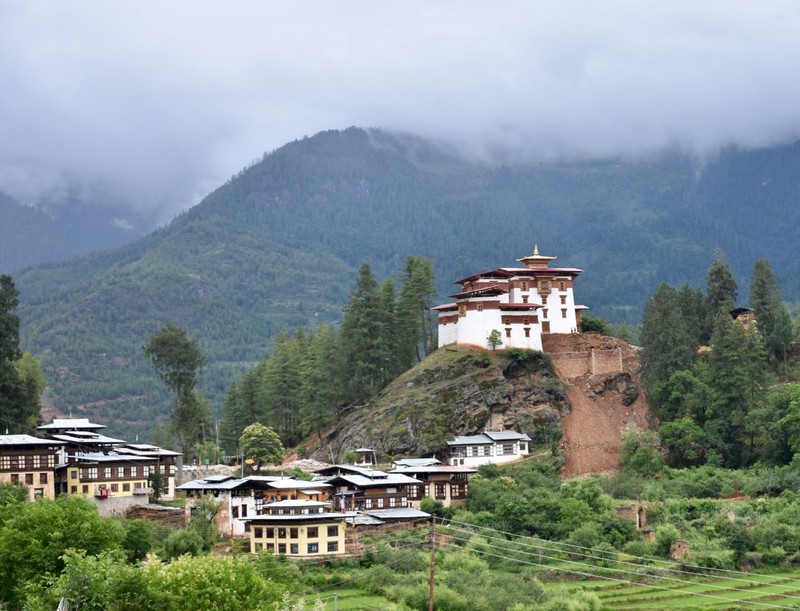 Posted by world_wide_mike 08:43 Archived in Bhutan

I’m thrilled that you were able to see Tiger’s Nest! The photos are stunning!