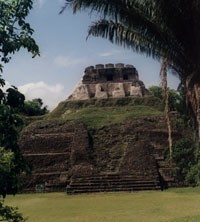 It had been six months since my last international trip, and I had the itch. My planned Lithuanian vacation was still four long months away, so I signed into the computer system at work and hunted for a quick trip. Something to salve the bite of my travel bug.

The jungles of Belize beckoned, with their half-hidden Mayan temples and pyramids. Continental's flights from Houston to Belize City were open, so I read the guidebooks and searched the internet. I discovered the Aguada Hotel in Santa Elena, within easy distance of the acclaimed Mayan ruins of Caracol and Xunantunich. By e-mail I confirmed a shuttle from the hotel to pick me up at the airport on Friday afternoon, dropping me back off Monday, giving me the weekend to explore that corner of Belize.

On the hour and a half ride to the hotel, I met fellow guests Jill and Susan from Eastern Pennsylvania. The three of us peppered English-born Lenny Wragg, our driver and tour arranger, with questions about Belize, its sights, people, plants and animals. Lenny was just the first of the friendly Aguada staff to charm us.

Belize's heat and humidity were intense, overwhelming the van's air conditioning and necessitating an immediate shower once I checked into my room. For dinner, Jill, Susan and I took a taxi to next door San Ignacio, the district capital and informal traveler (not tourist) oriented town. We ended up at the popular Eva's Restaurant for burritos at an outdoor table, watching the residents, travelers and numerous archeology students pass by. 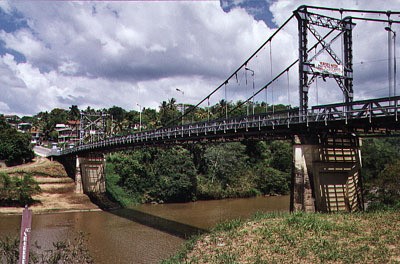 Say archeologist to me, and I picture a bespectacled and bearded man in his 40s and 50s. The ones I met in Belize were all college age and seemed to hunger for fun as much as historical discovery. We met more archeologists the next day on our guided trip to Caracol, Belize's largest Mayan site. The unpaved road to Caracol is brutal and bumpy, passing through a national park and pine and rain forest. It is a tribute to the skill and knowledge of our guide/driver, Everald Tut, that he can make the trip year round in a van, rather than the recommended four wheel drive vehicle.

Caracol was something new to me -- a living, breathing archeological dig. Although open to visitors, it is foremost a work site with tarps, wheelbarrows and mounds of freshly dug dirt scattered throughout. Although less picturesque than its pristine historical rival, Tikal (in Guatemala), it imparts a sense of ongoing discovery that is a flavor all its own. Everald had worked at Caracol and knew the archeologists and their local helpers. He pulled off the bright blue tarps to show us carved stellae or get a better look at lower levels of temples. He led us down into a tomb, nonchalantly disturbing its occupants (no, not mummies, just two skittish bats). Particularly exciting were two huge, recently excavated stone masks. With a chuckle, I moved aside the plaster spray bottle the archeologists had left behind, so I could photograph the mask without the bottle sticking out of its nose. 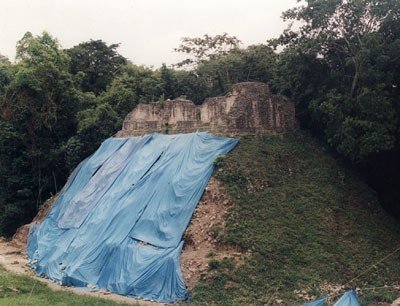 The climax was undoubtedly the soaring, pyramidical Sky Temple. It was a long, hot climb to the top, but Jill, Susan and I had it all to ourselves. The 360-degree view of jungle and hills stretching for miles around was spectacular. The 1000-plus year old temple is still the tallest building in Belize.

On the way back, Everald led us through Rio Frio cave. A clear, green stream threads its way through stalagmites and stalactites dripping from the ceiling or oozing up from the knobby, rocky cave floor. Jill is a cave buff and was thrilled -- even a hole teeming with a swarm of bats didn't dampen her enthusiasm. Next, it was Rio On Pools, where the mountain stream forms a mini waterfall and widens out into rock rimmed swimming holes. Susan opted for the gentle pools, while Jill and I struggled across the uneven, algae-slick stones towards the waterfall. Both of us slipped more than once and crashed against unseen rocks. We made it, though, and stood up in the torrent which pummeled our shoulders and back like a cluster of nieces and nephews trying to gang tackle us. It was a perfect end to a humid, sweaty day of jungle exploration. 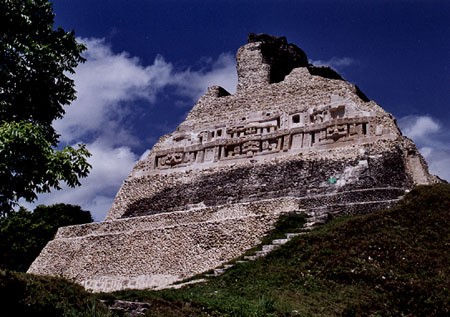 Relief carvings on pyramid at Xunantunich

The next morning, the ladies went canoeing and caving while I was off to the ruins of Xunantunich. A hand cranked cable pulls a tiny ferry, big enough for one vehicle and perhaps a score of people, across the lethargic Mopan river. Once across, I hitched a ride with the tourist police in their pickup truck the final two kilometers to the hilltop site. For the first half hour or so, I had Xunantunich all to myself. Although I had enjoyed Caracol with Everald, Jill and Susan, there is something about wandering alone at a historical site that thrills me. My mind and spirit soars as I pace slowly about, imagining the place at its glory and soaking up the grandeur. 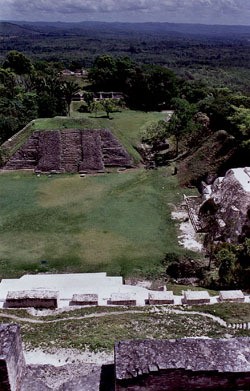 View from atop main pyramid, Xunantunich

In Xunantunich, there is plenty to soak up, too. There are two main, grassy plazas, divided by a low, four-sided stone pyramid. The nearer plaza was bordered on its rear edge by a steep rise, which was topped by the ruins of a palace for Xunantunich's rulers. Their view must have been royal, with the valley stretched out beneath. They would have seen jungle, cultivated fields and smaller settlements in one direction, and the city in the other. At the far end of the city was the Castillo -- its tallest temple. My eyes were drawn to it, rising up into the clear blue sky. Shortly thereafter, I stood on its summit and admired an even grander view. Unlike Caracol, Xunantunich is fairly well excavated and laid out for visitors with cropped lawns and steps to its major buildings. I saw the nearby village of San Jose Succotz, the border town of Benque and beyond, the hills of Guatemala.

I explored the ruined city thoroughly, striking out on its jungle paths to isolated clusters of buildings and grassy mounds, beneath which lurk unexcavated temple pyramids. It was a small city, perhaps a mere pawn in the ongoing struggle for dominance between Caracol and its rival Tikal. However, standing atop the Castillo, you got a sense of the greatness of the Maya's accomplishments. To build a city -- no, a civilization -- in the clasping heat and inhospitable jungle, surely ranks with history's most amazing efforts. Despite being thoroughly exhausted from hours of climbing and walking under the hot sun, I was also thoroughly elated. 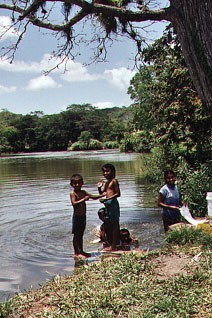 I did some more exploring, visiting a Mayan art cooperative in the nearby village (where I bought a painted, three legged pot), took some photos of the river and also of San Ignacio (including its Brooklyn Bridge look alike that connects it to Santa Elena), cooled off with a beer in a shady bar, then finally headed back to the hotel. Through the waves of humidity, I could feel the Aguada's pool calling me. I spent the rest of the afternoon and early evening relaxing. I had a nice chat with Bill Butcher, the Delaware native who owns and runs the hotel with his Belizean wife Cathie. You can tell Bill cares deeply for Belize, and takes the smooth running of the local tourist industry seriously. He can imagine little worse than a visitor having a bad experience, so works tirelessly and selflessly towards everyone's enjoyment.

The staff of the Aguada and the Mayan ruins combined to concoct the perfect ointment to soothe the itch of my travel bug. And, as much as pyramids, rewarding travel is about people. Jill and Susan's companionship enriched my trip to Belize. I hope their memories of their trip are just as fond as mine. Now, I think I can j-u-s-t make it those four months until Lithuania rolls around...

Posted by world_wide_mike 13:54 Archived in Belize