Seeing Buddhist temples by boat, tuk=tuk, and train is the way to go!

As soon as I won the EVA Airways passes at the Christmas party, I knew where I was going: Thailand. I'd almost gone two years back when the Asian economic crisis first hit, and bargains on package tours were incredible. I'd held off, but had been eyeing the chance to go since then.

Both my mother and Sharon were nervous about my going, with the threat of terrorism and the war in Afghanistan. I'd long ago given up worrying about being the victim of either a plane crash or an act of terror. The chances are overwhelmingly greater to die in a traffic accident, yet you don't see people giving up driving to work, do you? I'd be lying if I said I never get nervous. I research my destinations fairly thoroughly. I simply feel that you can't wall yourself off from the rest of the world. All you're doing is shutting yourself off from experiencing Life.

One thing I was NOT eager to experience, though, was the 14-hour flight from Los Angeles to Taipei. Plus, you have to add in five hours on each end of that flight to get from Columbus to L.A., and Taipei to Bangkok. To compound the misery of more than a day in the air, I was stuck in a middle seat on the L.A.-Taipei flight -- ugh! My neighbors were also determined to win the war of the arm rests, too. Somehow, I managed to sleep some, so I wasn't too exhausted when I reached Bangkok. At least that is what I thought!

I'd booked my hotel on the internet through HotelThailand.com, and received a free airport transfer, which was waiting for me when I arrived. The Holiday Inn Crowne Plaza was a definite step up from where I normally stay. I'd won some money in Vegas the month before, though, and decided to treat myself to an upgrade. After a quick shower, I navigated Bangkok's busy, noisy streets to the much quieter riverside and found the Chao Phraya River Express. The express is basically a water bus, much like a Venetian vaporetto. It is an excellent, relatively peaceful way to navigate Bangkok, stopping near many of the city's main sights. And at eight baht per ride (less than 20 cents), it is a bargain. 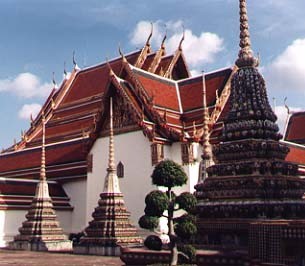 I headed upriver to Wat Pho, one of Bangkok's largest and most elaborate temples. It was stunning. The colors on the statues, temples and towers were vibrant. Shining in the afternoon sun, the temple roofs gleamed gold against the clear blue sky. Elaborate, stone warriors stood guard over even more elaborate, gilded gates. Row upon row of bronze Buddhas meditated solemnly, draped in the orange cloth of a monk's robe. I was disappointed, at first, to see scaffolding surrounding the giant, 151 feet long Reclining Buddha. However, a good vantage point could be gained at the head and feet, allowing you to appreciate the statue's size.

As it was 5 pm, I decided to head back to the hotel, since most of the temples were closing. I laid down on the bed "just for a few minutes" before I went out for dinner, I told myself. The next thing I knew was waking up at 10:30 pm. I shook my head and decided to give up, and went to bed. 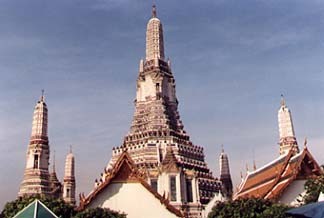 I got an early start, though, the next morning, heading off (appropriately enough) to Wat Arun, the Temple of the Dawn. Its soaring, riverside towers are encrusted in various hues of pastel-colored porcelain designs, flowers, figures, etc. Whereas Wat Pho's bright colors had been like the clash of cymbals, Wat Arun's muted tones were like the playing of a flute. I climbed the tall central tower, looking across the busy river traffic to yesterday's Wat Pho and my next stop, the walled complex of the Grand Palace and gilded Wat Phra Kaew. Descending, I peeked in at a nearby Chinese temple, admiring its giant, colorful guardian statues. 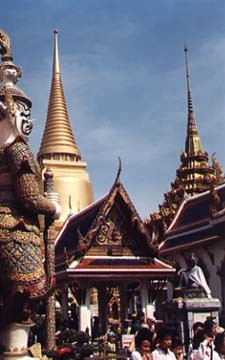 One thing I'd enjoyed so far about both temples were the lack of crowds -- there were more thronging the streets than inside. That ended abruptly at the palace and Wat Phra Kaew. It felt like my trip had died and gone to Tour Group Hell, as throngs of school children and guided tours elbowed me aside or swarmed across the sights. Wat Phra Kaew was incredible, from its gold plated chedi (shaped like a giant tea bell) to its ornate temple buildings and gilt-encrusted Temple of the Emerald Buddha. The palace buildings were equally gorgeous, although much more spread out than the claustrophobic Wat Phra Kaew. After the jostling at the temple, I enjoyed the breathing room. However, the sun beat down mercilessly and the humidity began to soar. I needed a break and took the river express back to the hotel for lunch and to recoup my strength.

After that, I took a hotel taxi (Note: Do NOT take the hotel's own taxis. Insist on an ordinary metered one, as the hotel taxis are three to four times as expensive!) to the Golden Mount, a Buddhist temple on a hill with a great view of Bangkok. It was closed, though, till late afternoon. I was told many of the smaller temples would be closed as well, since it was a Buddhist holiday. A couple friendly Thais suggested I hire out a tuk-tuk for the afternoon to see some of the more scattered temples around Bangkok. The price on Bangkok's signature, 3-wheeled taxi (looking like a cross between a golf cart and a motorbike) was unbeatable, so I agreed. Later, I found out why the price was so good. 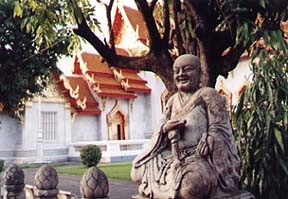 The tuk-tuk took me on a several hour tour of a half a dozen temples. Sandwiched in between was a stop at "Government Export Store." As it turned out, the driver got a coupon for free gas from the store for every tourist delivered. I laughed and played along. It was fine, as long as it made my costs cheaper. However, I got a little annoyed at the second unannounced stop, a Tailor Shop. I did not come all the way to Thailand to buy a suit. My driver gleefully pocketed his second coupon and delivered me back to the Golden Mount, which was now open again. Then, he abandoned me -- without ever getting paid! I had to hire another tuk-tuk to get to my final temple, fighting off any attempts to be taken to any more stores.

After returning to the hotel and showering (it seems you need one within an hour of leaving it, with the humidity!), I walked down Silom Road to a highly recommended pub, O'Reilley's, for dinner. I swung through the market area on the way back, checking out the souvenirs. I chuckled at the bars and hostess girls trying to coax the male tourists inside, but my humor died when I saw the Osama bin Laden T-Shirts in the stalls. None of the vendors would catch my eye, so I couldn't tell them how it brought my blood to a boil. Maybe they were as ashamed of selling them as they should be. 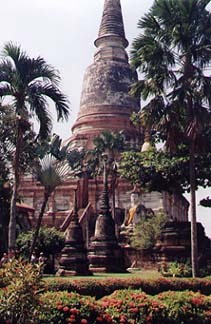 The next morning, I took a train a couple hours north to Ayuthaya -- the capital of Thailand during the Middle Ages. I negotiated with another tuk-tuk driver to take me around for the day. The ruins of the various temples and royal buildings scattered about the river and canal crossed town were tremendous. Massive, tea bell shaped chedis loomed here and there, along with soaring, Khmer-style prangs and towers. Giant gilt or bronze Buddhas sat serenely by the waterside. The effect was very otherworldly, as the strangely shaped architecture cast shadows under the glorious, afternoon sky.

I visited temple ruin after temple ruin, reveling in the feel of history all around me. Now, I know this type of day is not for everyone, and most would have been happy after seeing just a few, but there was something very compelling about the ruins of Ayuthaya. They were so different than the ruins I'd visited in Europe or the Middle East, but lit the same spark inside me. I paced slowly about Ayuthaya, drinking it all in. Once again, I breathed a prayer of thanks for the opportunity I'd been given to visit the places of the world where history was made, where kings strove with their enemies, and people came to worship by the waterside. Even the long, slow train ride back to Bangkok did not dim my spirit. 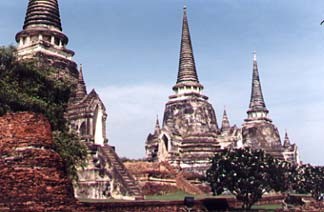 I was so inspired I even tried a Thai restaurant that night! My sense of adventure does not extend to eating -- I normally do not have a burning desire to sample local cuisine. Tonight's meal was excellent, though. I came back two nights later to sample another Thai dish, after returning from my two-day trip to Cambodia.

The day in Ayuthaya, though, was a fitting finish to my sightseeing in Thailand, as well as an appropriate prelude to Angkor Wat in Cambodia. Thailand had been everything I'd hoped for. Its gleaming temples, friendly people and sublime historic sights were well worth the two year wait.

Posted by world_wide_mike 14:41 Archived in Thailand