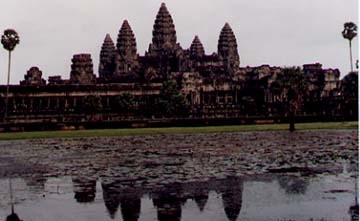 View of Angkor Wat across moat

Ever since reading a fantasy epoch in the 1970s, whose opening scenes were set amid lost temples in the Southeast Asian jungle, I have dreamed of going to Cambodia. And when I discovered that Angkor Wat was real, and that you could explore this long-hidden city, the desire grew stronger. But the reality of war, civil strife and that country's desperate political situation kept me away.

Until now. Peace arrived in Cambodia three years ago, and I had been watching to see if it held, and the dream could come true. When I made plans to visit Thailand, I nourished the dream in secret. As my itinerary took shape I decided to go for it and booked a two day tour of Angkor Wat to fit at the end of my week's vacation.

The ruins of Angkor Wat did not disappoint -- they are extensive and marvelous. Ranging from immaculate, rebuilt temples that seemed to lack only a coat of paint and interior furnishings, to half-hidden ones tucked away in the jungle, their stone blocks being tumbled and squeezed by massive tree roots, Angkor's ruins were greater than my go-go-go two days could devour. 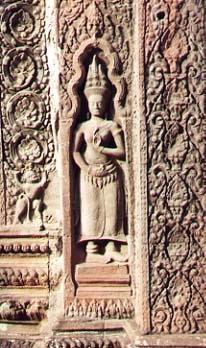 However, the biggest surprise was the Cambodian people. Amongst the forty plus countries I've visited, it would be hard to find a more uniformly friendly people who were truly happy to meet travelers. It seemed every man, woman and child whose eyes I met immediately broke into a wide smile. They were polite and inquisitive, asking where I was from. Many expressed sympathy for us after the September 11th tragedy. And this was from a people whose country had received little but misfortune at the hands of the United States.

Guides are mandatory in Angkor, and mine, Phay Sophy -- a history teacher at the local high school -- was the first friendly face that greeted me upon arrival. Sophy and the driver whisked me in our air conditioned car to the Salina Hotel in Siem Reap to check in. I quickly ditched my bag in the room and was soon bouncing along the town's dusty streets towards Angkor Wat, 15 minutes or so away.

I had looked forward to visiting Angkor for so long that I wondered if it would be a let down (especially after Thailand's incredible ruins at Ayuthaya, the day before). For the first couple of hours, I thought it might be the case. But slowly, Angkor's extent and majesty began to sink in. As I ran my hands along countless carvings of kings and dancers, admired the statues of guardian gods and demons, or stared up at the soaring, strangely-shaped towers, my wonder grew. Every great place has a "Wow!" factor: Some kick in right away, like the Colosseum or Petra. Angkor's came on slowly, after exploring temple after temple. It seemed every inch was decorated with nearly thousand year old inscriptions, bas reliefs and statues. According to my guidebook, Angkor is the largest religious monument in the world. Imagine every temple in Ancient Greece gathered into one area -- some hidden among the trees, others on hills or in the middle of artificial lakes -- and you get an idea of the impact. 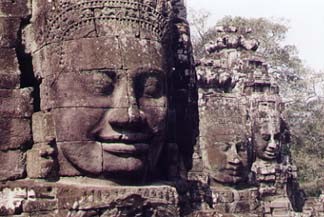 Sophy taught me to distinguish Hindu and Buddhist temples, to recognized some of the gods carved into Angkor's rock faces, and occasionally pointed out the best angles for pictures. Besides the main complex of Angkor Wat (whose temple gives the entire area its name), two of my other favorites were the Bayon and Ta Prom temples. Bayon was the very first we visited. The enigmatic, half-smiling face of Avalokiteshvara gazes down at you at every turn. The 54 towers have his face sculpted into them, each with four heads, looking east, west, north and south. The effect is haunting, as if the 200 plus images of Avalokiteshvara were watching you, making sure his moat-encircled temple is not violated.

Ta Prom is at the other extreme, hidden in the jungle amidst the screech of parrots and buzzsaw whir of cicadas. Centuries of jungle have overtaken the temple, dislodging stones and caving in walls with its mighty roots. Those who saw the recent movie "Tomb Raider" caught a glimpse of this eerie ruin. Without Sophy's guiding, it would have been easy to get lost in the dark, turning passageways and dead end courtyards. Although some scholars have criticized the authority's decision to leave Ta Prom in its jungle state, it is an atmospheric experience for travelers. You get a chance to step into the shoes of the early French discoverers of Angkor. 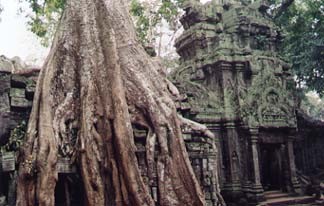 The main temple of Angkor is a highlight we saved for the afternoon. Its five conical towers look for all the world like old-fashioned juice squeezers. A great, 200 yard wide moat encircles the walled temple like a medieval fortress. A wide causeway creates a processional entrance which lets visitors slowly absorb the temple's size. Detailed carvings decorate the wall of a galley that runs the length of and width of the building, telling stories from Angkor's history and myths. Soldiers, heroes, chariots, elephants, demons and gods battle on the intricately detailed walls. Sophy pointed out the Khmer (Cambodian) soldiers with their elongated ear lobes symbolizing a long life ahead, their sometimes enemy, sometimes ally Thais with their trident-like spears, and the enemy Cham with their elaborate headdresses.

He pointed out the Hindu pantheon, each god riding his particular mount. Especially prominent was the king's patron Vishnu, atop the mythical bird Garuda. Being a Hindu temple, Angkor Wat is laid out on successive levels, forcing visitors to climb as they move towards the interior. From the towers, you could look out on the maze of the temple complex stretching beneath you, the encircling moat (now used as a swimming pool by the local children), and the jungle all around. Angkor Wat ranks up there with the greatest of historical sights. Visitors who make the journey are rewarded with one of the world's Ancient, man made wonders. 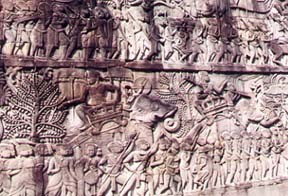 The nearby town of Siem Reap is being remade, as well. Construction seems to be taking place everywhere as the locals bank on word of Angkor Wat's wonders and Cambodia's peace gets out. Some automobiles zip along the rutted roads, but most Cambodians kick up dust aboard bicycles and motorbikes. And it is not just one to a bike, either. I saw families of four wedged onto a motor-scooter. Nearly every vehicle has at least one passenger clinging to the back or squeezed between the handlebars. Motorbikes are the preferred taxi, too, with some travelers hiring a young man for the day to bounce them along the roads from temple to temple, while they balance on back. There are even some motorized rickshaws like Thailand's famous "tuk-tuks."

In the evening, I joined the stream of footsore travelers headed to Siem Reap's numerous restaurants. A couple Cambodian boys plopped down next to me at my table at the Angkor Borey restaurant to chat. We discussed life in Cambodia, the United States, and the boy's hopes for the future. They read the postcards I was writing, eager to practice their English. Occasionally having to be a busboy or waiter called them away for a moment, but they always returned.

The Cambodians are a friendly, outgoing people, whom I sensed suffered during their country's isolation from the world. No visitors, no new friends to make. With peace's return, Angkor was again opening the door to the world for them. Those ruins are a mighty, world class sight. The people are of equal stature, their smiles and greetings as genuine as the temples.

Posted by world_wide_mike 15:00 Archived in Cambodia