South of France packed with sights and beauty 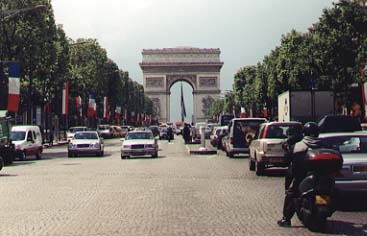 I'd read in one of my travel magazines that Paris is the most visited city in the world. And I knew that in recent years Provence was becoming increasingly popular as a vacation spot, with foreigners snatching up villas and farmhouses all across the country. So, when Sharon's Dad generously offered to take me along on the family vacation to France, I jumped at the chance. The plan was to spend three days in Paris, then a week in Provence.

So, was Paris up to its billing as the number one tourist city in the world? If you're an aficionado of art museums, perhaps yes. If you are like me and more into sights and scenery, then definitely not. I think it was when we had climbed to the top of Sacre Coeur -- a church on a bluff overlooking Paris -- that it first struck me. With the cityscape spread out beneath me, I decided Paris is not a pretty city. The line of the Seine River is hard to trace and the buildings appear haphazardly arranged. They do not follow the curve of a bay, are not molded by hills, nor do they cluster around a centrally-located Old Town. Even the next day from the Eiffel Tower -- the giant metal asparagus as the Parisians once called it -- I did not feel any awe looking out over Paris. Aesthetically, Paris is blasé.

This is not to say there were not parts I enjoyed, though. My favorite area was around the Ille de France -- the island in the middle of the Seine River. It is connected to the banks by graceful bridges and bristles with historic buildings like the Notre Dame Cathedral. The Louvre Museum was interesting, as well, although I felt I should have prepared myself fro the visit better. It is not set up for idle browsing as well as, say, the Vatican Museums in Rome.

Which brings me to another point: Paris is the number one Tourist City, right? People from all over the world have been coming here for years. And the Louvre is the signature museum in Paris, right? They why are the placards and descriptions of the various artworks not written in any other language? No German, no Spanish, no Japanese, and of course, no English. Now, don't get me wrong -- I'm not one of those travelers who feels everyone should speak English all across the world. I spent $150 on an eight week French course at Ohio State to prepare myself for the trip. The Louvre seems willing to take tourists' money, but don't appear to care to make their visit more informative. 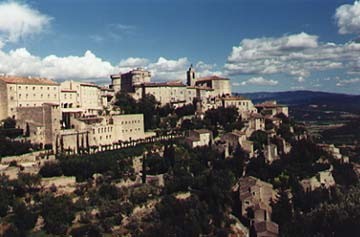 Well, enough of raining on Paris' parade (which id did on me for two of the three days)! On to the good stuff -- Provence! Simply put: Provence is spectacular. It has charming countryside, gorgeous panoramas and castles and history as thick upon the land as its numerous vineyards. Toss in an idyllic pace to life and you begin to learn why it is growing more and more as a popular destination.

Our first morning in Provence began with a drive to the Sunday market in L'Isle-sur-la-Sorgue. The streets of this canal and river-crossed little town were jammed with tables holding everything from food to clothing to antiques to miscellaneous household items. The colors of the tablecloths, shawls and clothes were bright with rich yellows, blues and greens. After a couple hours shopping and a cafe lunch, we checked out nearby Fountaine de Vaucluse -- a startlingly clear green pool in the hills from which springs a series of waterfalls and rapids that are the source of the Vaucluse River. Finally, we wound our way along hilly roads to the Abbey de Senanque, which is picturesquely set amid fields of lavender. This was the high point of the day for me. The circular gray stone towers, with their quiet church and halls, made for a perfect centerpiece to the lush valley. 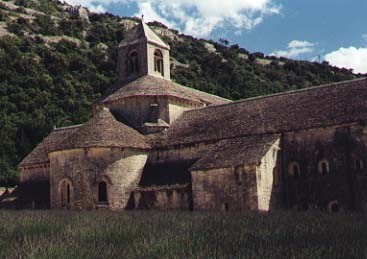 Abbey Sennanque in fields of lavender

The next day we drove north to Roussillon -- one of Provence's many hilltop villages. To me, these dramatically sited clusters of terra cotta roofs, church steeples and golden stone buildings are the true essence of Provence. Most have a castle or chateau looming high above and are often surrounded by medieval walls and towers. As we drove through Provence, we'd catch sight of them shining across the valley in the perfect sunlight we were blessed with daily. One of the best panoramas was the village of Gordes, whose houses seemed stacked on top of one another competing to be the highest. Roussillon is famous for the red ocher rock which colors many of its buildings. From there, we returned to our home base of Cadenet, stopping in neighboring Lourmarin and touring its chateau. 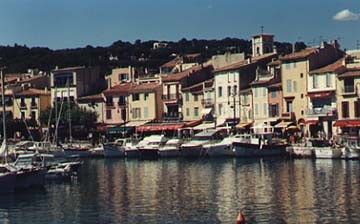 Our third day began with a quick stop in Aix-en-Provence (which was also holding a market day), then southwards to the Mediterranean and the town of Cassis. Originally a charming fishing port, Cassis has grown and sports many condos and vacations homes snuggled together, all craning for a glimpse of gorgeous Mediterranean blue. This was Sharon's favorite stop. We all felt that Provence was gorgeous, and that by adding water it became Heaven. Our boat trip along the coast, nosing into the fjord-like, rocky calanques was stunning. The water was a turquoise rivaling anything the Caribbean offers. People of every nationality soaked up the sun on the white rocks, beaches and sailing boats, exposing as much skin as fit their whim. Sharon resisted the temptation to cover the eyes of her 12-year-old son, Alex. 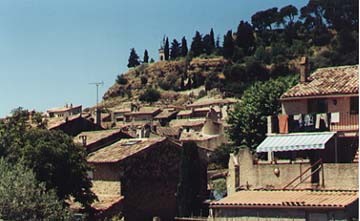 We decreed Wednesday a day of rest for all of us, but especially her father, Gerry, who had the difficult task of driving our large van among the narrow streets and sinuous roads of southern France. We all split up and explored our village of Cadenet. Sharon, Alex and I climbed to the top of the hill and crawled among the ruins of the 11th century castle atop it. The ruins were fairly extensive, with remnants of towers and walls sprawling across the wooded top of the hill. The view was idyllic and pastoral, with the orange of Cadenet's terra cotta roofs stretching out to meet the green of the farmer's fields. We took our time strolling back into the village, stopping at the church, cemetery and museum covering the local craft of basket weaving. We finished off the afternoon with a dip in the villa's pretty pool, and lingered in the sun on the patio. 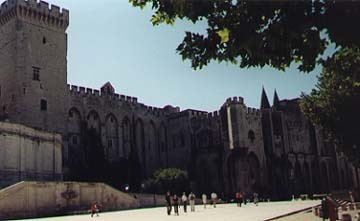 On Thursday we drove to historic Avignon, home to the Popes for much of the 14th century. Their massive palace -- part cathedral and part castle -- dominates the medieval, walled town. We toured its inside, then wound our way through the streets to Pont St. Benezet, Avignon's trademark "Half Bridge." The medieval era bridge over the Rhone extends only halfway across the river, now, part of it washing away centuries ago. After lunch, we crossed the river to massive Fort St. Andre. It was built by the French to guard their border with Papal lands, and its towers give excellent views of Avignon. After the crowds at the Pope's Palace, the deserted fortress with its monastery inside was peaceful. I enjoyed climbing the spiraling steps and imagining the castle during its medieval heyday. 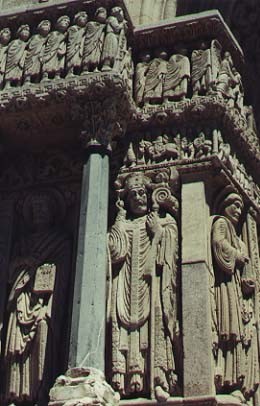 I took a side trip to Arles on Friday, while Sharon and her family visited a couple nearby villages. Arles is a Roman town, whose showpiece is its massive Arena, or Coliseum. Today's inhabitants of Arles have erected metal bleachers inside the Ancient stone ring and hold bullfights in the Arena. I was of mixed opinion as I paced around its circle. I think it is great that something the Roman built is still being used today, but I felt the modern bleachers marred the Ancient atmosphere. However, I cannot fault them for putting townsfolk ahead of tourists. Also still in use are the Ancient Theater, with its columns and towers. Around the corner, the Cathedral of St. Trophesime was gorgeous, and I took my time pacing its interior and adjoining Cloister. Its doorway entrance is richly-carved with figures of angels, saints and sinners. Arles is packed with sights, though, and I had to hustle to take in the late Roman era baths and cemetery.

As a matter of fact, all Provence is packed with things to see and do. I felt we barely scratched the surface. It would be easy to spend "A Year in Provence," as Peter Mayle's books enjoins, and still not see everything. I was extremely grateful to Sharon's Dad for bringing me along -- his generosity was equal to Provence's bounty of beautiful sights. So, although Paris is not "Number One" on my list, Provence is certainly near the top.

Posted by world_wide_mike 06:24 Archived in France