Sunshine Brings Out the Colors in Bermuda

Rain, on the other hand, can dampen a trip no matter where you are 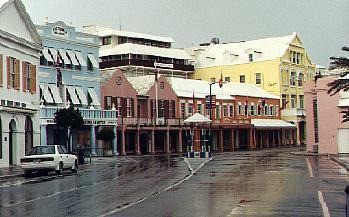 During our first day in Bermuda, the words to a song by Styx kept running through my mind:

You've been working and saving for your Jamaican dream,
Paradise is waiting across the sea,
But when your plane lands,
Montego turns to monsoon,
You've got the Island Blues

Yes, we were in Bermuda, not Jamaica, but as the rain was pouring down, the sentiment was the same. It rained all Saturday afternoon and evening (our first day), and right up till around noon Sunday. Then, the sun came out, and it was pretty much gorgeous weather until we left. We essentially experienced two Bermudas, and I like the second one a heck of a lot better!

Our trip itself was a last-minute substitute. Coworkers Gale, Julio and I had planned on visiting Peru and Macchu Picchu. However, for various reasons, that didn't work out. Since Gale and I had already dropped and traded away numerous days, Bermuda was our hasty replacement destination.

We got off to a stumbling start, too, as Fordham Hall Guest House (our Bed and Breakfast) screwed up our room. We were given a musty, tiny room (#5) with one bed instead of our double. It took an hour and a half to sort things out, but to their credit, they fixed it. We each got separate single rooms for the evening (I got unlucky #5) and moved into our nice, comfortable double room (#1) the next day. I was amazed at the world of difference between two rooms. Gale pointed out it is the exact opposite of the airline business: Airlines charge varying amounts for the same coach seat, while hotels charge the same amount for varying levels of accommodation.

After unpacking, we sloshed through the rain to downtown Hamilton, the island's capital and largest town. We found an excellent British pub for dinner, The Hog Penny, that was to prove our regular stop each evening. After a Shepherd's Pie and a few ales, and it being Saturday night, we decided to check out the night life of this tiny town. Whether it was the rain or what, there was little going on that attracted us. We wandered the damp streets, finally ending up in The Colony Pub in the massive Hamilton Princess Hotel. After the Hog Penny, this hotel bar seemed a little forced and artificial. We called it a night after one more beer and turned in.

The next morning, we went to Monty's Restaurant -- Gale wanted to try the national Sunday breakfast, Cod Fish and Potatoes. Those who know me will quickly realize I did not partake of this (I hate fish; nothing that ever swam makes it onto my plate!). Gale pronounced it good, though, but a bit of an odd taste for breakfast. After a long linger, hoping the rain would stop, we stepped out into the rain and caught the bus for St. George. 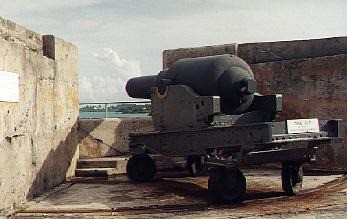 St. George is the former capital, and a colorful town chocked full of historic buildings. Many of the museums and sights were closed (being Sunday), but we had a good time nonetheless. The arrival of the sun brightened things immensely. We followed the suggested itinerary of my Lonely Planet guidebook, seeing the Town Hall, churches, and brightly-painted homes that historic St. George had to offer. We also took in nearby Fort St. Catherine, which guarded the northern tip of Bermuda with its ramparts and cannons. The magazines and tunnels make an excellent tour, with informational displays, signs and audio presentations. The sighting of the fort was excellent, too, looking out over the clear, blue Atlantic. We hoofed it back to St. George and caught the next bus. On the way home we stopped off at the Swizzle Inn -- home of one of Bermuda's national drinks -- the Rum Swizzle. Naturally, we had to try one!

All in all, Sunday was an excellent day. Bermuda in sunshine is a completely different place than Bermuda in the pouring rain!

Monday morning we were presented with a decision: Rent mopeds or sightsee by bus? We chose the moped, which is kind of the national form of transportation on Bermuda. Each family is allowed only one car. So, when another family member is using it, everyone buzzes around the island on these instead. We loaded our mopeds on board the ferry to the Dockyards, on the western half of the island. The Dockyards is kind of a megaplex that Bermudian business is investing heavily in -- shops, movie theater, historic museum, craft store, etc. It was another glorious sunny day, though, so after a cursory look around, we zoomed out of there and onto the open road. 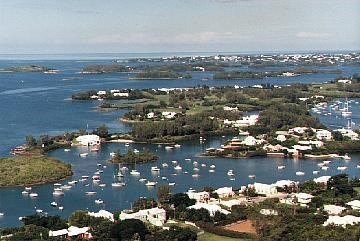 I have always enjoyed sightseeing by moped. The ability to pull over whenever you wish, yet cover lots of ground while smelling the air and hearing the surf or whatever, is just an excellent combination. Referring to my host of maps, I made frequent stops to orient ourselves and check off sights I'd wanted to see one by one. Of course, I also pulled over when the beauty of the seacoast simply demanded I stop. We saw quite a bit this day: quaint Somerset Bridge (world's smallest drawbridge -- opens only 18 inches); hilltop Fort Scaur, with its earthworks and lovely views of both coasts; Gibbs Hill Lighthouse, for more stunning panoramas; isolated coves with their beautiful beaches, like Church's Cove and the incomparable Horseshoe Bay. Although we lingered at Church's Cove, enjoying its isolation ("This is my idea of paradise," Gale said), the pink sand and clear blue waters of Horseshoe Bay demanded we put on our suits and go bathing. As we zipped back into Hamilton, with daylight fading, we made one last ride out to Spanish Point. Its pleasant, grassy park with views across the water to the Dockyards would be a great place for a sunset. We'd missed it by perhaps half an hour, but still lingered to watch the colors dim.

Monday had also seen the arrival of two cruise ships in Hamilton's harbor. The streets were a bit busier, we noticed, as we walked towards The Hog Penny. However, that didn't translate into packed bars, though. It seemed the bulk of the passengers must have been eating dinner and having drinks on board. We called it an early night, though, as we wanted to do some early zipping around on our mopeds before they were due back.

Tuesday morning continued our run of glorious weather. We rode to another portion of the island we hadn't visited -- ritzy Tucker Town, most of which is owned by a private resort/club. We saw the natural stone arches by the seaside, though, then stopped off on the way back at Spittal Pond. The name is not appetizing, but it was an idyllic, woodland setting, favored by birds and waterfowl. On the way back to Hamilton, I pulled over for a few photos of the brightly-colored homes of Bermuda's residents. The colors leap right out at your eyes -- pale blues, purples, pinks, lime greens and blinding whites. With Bermuda's pink beaches and turquoise waters, the residents must feel obligated to try to match the beauty of nature with their buildings. 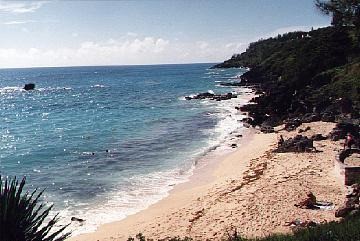 We finished off our stay in Bermuda with a final walk through Hamilton along bustling Front Street. I had been hoping to find a sweater for Sharon, but prices were outrageous. The cheapest sweater I saw in "The Pringle Store" was more than $350. As much grief as I give her about spending money on clothes (guys have to do that kind of thing), I felt I couldn't bring myself to do it.

Which brings me to the cost of Bermuda itself -- this is NOT a cheap island. You will be hard-pressed to find rooms under $150 a night. Beers are more than $5 each, and a dinner under $20 can only be found in a few places (like The Hog Penny). So, work and save for your Bermuda dream, just don't go expecting bargains! However, if you happen to be there when the sun is out, go expecting beauty!

Posted by world_wide_mike 17:43 Archived in Bermuda