Talinn is a Gem of a Medieval City

Stop one on my Baltic cruise is a great beginning 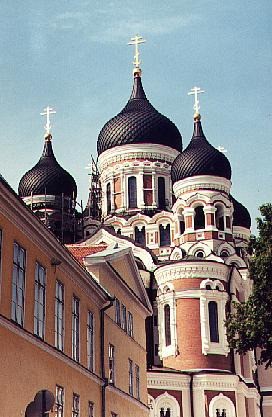 Twice before I'd attempted to go to the Baltics, but cancelled flights had prevented me. This time, I went by sea and that proved to be the key.

Tallinn, Estonia, was the first port of call on our Baltic cruise, and I was looking forward to it quite a bit. When I walked down the gangplank and caught sight of the spires of the Old Town's cathedrals and towers, I knew I wouldn't be disappointed. It is everything you picture in a medieval city -- a stone wall circling the town, defended by 29 towers (all with pointy red tile roofs), dotted with numerous cathedrals, and streets of pastel-colored buildings with ornately carved, wooden doors. 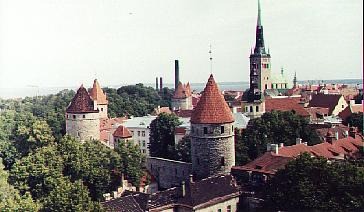 Sharon and I began our exploration in the town square, Raekoja Plats. The town hall was covered in scaffolding, but the rest of the wide square was ringed with Renaissance-era buildings in bright shades. Cafes were set up on one side of the square, and Sharon mentally marked down this place for lunch in a "cute cafe." I led her up and up the streets, headed for the Upper Town, or Toompea. We passed by the St. Nicholas church, whose tall, blackened spire we'd seen from the ship. The last 50 yards or so were stairs, but once atop them, we were rewarded with the sight of the Alexander Nevsky Russian Orthodox Church. Its onion-shaped domes were black, smoothly contrasting with the building's white walls. Inside, it was ornate with gold and icons crowding the walls and pillars. A service was going in one corner, with worshipers lighting candles and praying quietly. Across from the church, the Parliament building gleamed pinkly in the morning sun.

We circled the church and walked along the base of the high wall guarding the Upper Town. We admired the solid, square "Virgin Tower" and the tall, cylindrical Kiek in de Kok (or "Peek in the Kitchen" -- so named by the medieval German mercenaries who joked they could peek into the kitchens of the Lower Town residents from its heights). The tower wasn't open, yet, so we made plans to return in the afternoon. From there, we explored the Toom Kirk (Dome Church). On the inside, Toom Kirk was festooned with heavy wooden crests of various Baltic nobles. There were so many that more than a dozen had been taken down and put into a storage rack at the back of the church. Many notable Estonians were buried in the cathedral, which tended to give Sharon a case of the "willies."

We then made our way to a scenic overlook on the ramparts that gave a great view of the Lower Town. It was warming up to be a bright, sunny day, and the breeze blowing across the walls felt great. Beneath us, we could make out the row of towers leading from the Toompea to the medieval town gates. Their quaint red roofs shared the skyline with the black spires of the cathedrals of the Lower Town and the burnt orange terra cotta roofs of the buildings. After a short rest, we plunged down the sloping, cobblestoned Pikk Jalg (or "Long Leg") street which led down into the Lower Town. We walked along, admiring the buildings until we came to Fat Margaret Tower, which guards the town gates. From there, you are supposed to get access to the walls, but unfortunately, we'd arrived on the way day of the week it was closed!

Disappointed, we circled outside, looking for a way up to walk the town walls. We were unsuccessful. Sharon was ready for a break, so we wound our way back towards the town square. As we sat in our "cute cafe" (a nearly-daily habit on the cruise), we watched the tourists and residents of Tallinn parade by. We were both glad we were seeing the town independently, rather than taking part in one of the ship's organized tours. There is little I detest more than shuffling along in a mob, all jostling to hear the guide or take pictures of the same thing before scurrying after the guide, again. Tallinn is an easy town to get around in, and a guided tour is quite unnecessary. The Estonians didn't seem to mind the mob of tourists, though, and were friendly. They also seemed to be making a conscious effort to make up for their years of Soviet-enforced drabness. Bright colors and sexy clothes were the rules of the day, at least for the young. Sharon griped that all the women were skinny and wore tight clothing. I wondered how much I could agree without getting swatted. I thought to myself the Estonians were a very attractive people, with their high cheekbones and blonde hair. Like I said, I kept it to myself -- Sharon is not shy about slugging me if she thinks I've done something to deserve it! 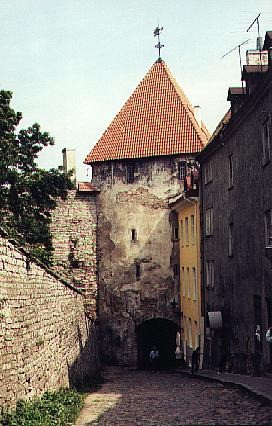 After lunch, we returned to the Kiek in de Kok, climbing the tower. The inside was a museum, as well, with displays on the military history of the area (which I enjoyed), and some modern art (which I did not). I'm not quite sure what the nudity and pictures of slaughtered pigs have to do with a medieval tower, but it probably goes back to that breaking out of the Soviet mold they'd been confined in for so long. The views from the tower windows weren't bad, but I didn't see anyone cooking in their kitchen. Afterwards, we shopped a little, then returned to the ship.

They say the third time is a charm, and my third attempt to visit the Baltics did prove charming. Our weather had been excellent -- sunny all day -- and the people were just as bright and friendly. Tallinn is a gem of a little medieval town -- well worth three tries to get there!

Posted by world_wide_mike 08:34 Archived in Estonia