Finland in Summer is a Delight

Helsinki's parks and cafes encourage the visitor to linger 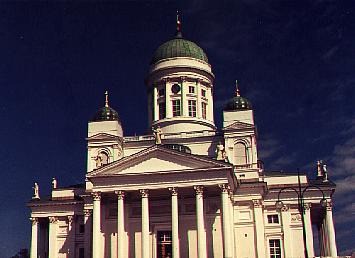 Ever since meeting a group of Finns when I worked on a kibbutz in Israel nearly 20 years ago, I have wanted to visit Finland. Two years ago, I had my backpack ready and was waiting in the boarding area of JFK, but there'd been no open seats (the curse of the standby traveler). This time, though, I'd get there for sure: It was a scheduled stop on our Baltic cruise.

With only one day to see Helsinki, Sharon and I began our sightseeing walking from the dock to the harbor area, stopping on the way to see the red-brick Russian Orthodox church. From there, the outdoor market was lively and interesting -- a blend of tourist items and everyday things for the city's people. They were lined up a dozen deep at the fishing boats, buying the morning's fresh catch. Being summer, we couldn't force ourselves to pick up any of the gorgeous sweaters or Winter wear. However, Sharon did grab a couple T-shirts and we made a mental note to come back and buy sandwiches here for lunch.

It was another glorious, beautiful Summer day in the Baltics (every single day of our cruise was sunny and in the 70s!). The Finns were out in force sunning themselves in the parks and cafes. As it turned out, Helsinki would be Sharon's favorite stop on our cruise. We agreed that that the parks, streets and buildings were very clean and pretty. I felt if I had to pick from all our stops where I'd want to live, Finland would win easily. That morning, we saw the Presidential Palace (Sharon enjoyed the fact that the current president is a woman), Senatorial Square with its simple, green-domed Lutheran Cathedral presiding, and then detoured to see the impressive Train Station and National Theater.

We had lunch in a jam-packed outdoor cafe (the market had closed early, so there went our sandwich idea!), and narrowed our choices down for the afternoon's sightseeing. We could either take a ferry to Suomenlinna -- Helsinki's 18th century fortress built across several islands, or take a harbor boat cruise (which would sail by it and other sights). Sharon was leaning towards the harbor cruise, so I didn't want to inflict another military history sight on her. The harbor tour was a fairly extensive one (two hours), that went past the numerous wooded islands that pepper the harbor. 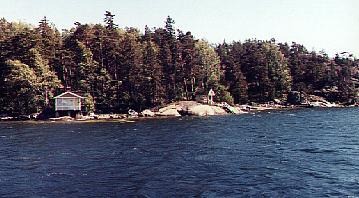 Along the shores of these islands were the summer homes of the wealthier citizens -- each with a tiny sauna by the water side. For the Finns, the sauna is an obsession. I'd been told by Finns that they don't really feel clean if they simply shower. First they must sweat in the sauna, THEN shower to feel truly clean. Plus, it is a form of recreation for them to sit for hours in there with family and friends, making frequent trips to the cold waters of a lake or harbor, then dashing back into the sauna. To me, it sounds like a recipe for pneumonia! That is one of the neat things about traveling, finding out these tidbits about other cultures. And the Finns ARE a unique people -- not really Scandinavian, per se. Other than Estonian, the closest language is Hungarian. Hearing Finnish spoken is an unusual sound. All their words seem to be a dozen letters long. They are an attractive people, though, typically with wide faces, high cheekbones, and almost Asian eyes. 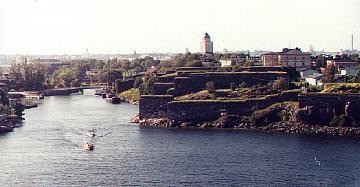 Sharon really enjoyed the harbor tour, although the breeze was quite chilly once out on the open water. It was neat to see the Finn's summer water playground, and get good views of Helsinki from the water. In retrospect, I'd probably had preferred to spend time on Suomenlinna, instead. Later in the evening, when our cruise ship left Helsinki harbor, we sailed right past it. From the top decks, I got a good view of the stone, star-shaped fort and was impressed. It looked like a place I could spend hours wandering around. However, I had not waited 20 years to see Finland only to be satisfied with a one-day visit. I will doubtless be back. There is the lake country to see, Lapland, and of course, Suomenlinna.

Posted by world_wide_mike 09:03 Archived in Finland