So much to see in Sweden, but so little time! 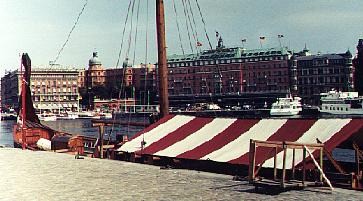 We were supposed to have most of Sunday and half of Monday to sightsee in Stockholm, before our cruise began. However, our aerial misadventures on Northwest and KLM cheated us out of the first day. So, Sharon and I had four hours to see everything we wanted.

Impossible, of course. However, we gamely began in Gamla Stan, the Old Town. Built on a series of islands and linked by bridges, Stockholm is a picturesque city. Pastel-colored Medieval or Renaissance-era buildings crowded together around narrow alleyways and cobbled streets. We peeked inside the Royal Palace a bit, but opted out of the detailed tour due to time. We then strolled to Stortorget, where the Stockholm Stock Exchange building presides over a colorful square lined with cafes and a fountain replete with water-spouting gargoyle.

We also walked along Vasterlanggatan, which appears to be the main tourist street, with souvenir shops clustered along it. Sharon bought a couple things, then we crossed the bridge to Ridderholmen (Island of Knights). It had a more stately air, with the Grey Friars Monastery and the Swedish High Court building. However, along the waterfront, it was peaceful and pretty. There were nice views across the water to the other islands of the city.

Time was running short, though, so we cut back across the Old Town, past the palace again, and through one of the medieval gates. We stocked up on soft drinks and bottled water (Holland America, in what I think is a senseless policy, charges for these, but not food, coffee or tea). Back aboard the M.S. Maasdam, we took up seats on one of the stern observation decks for a different kind of sightseeing. Our Baltic cruise began with a sail through the Swedish archipelago. Under brilliant blue skies, we watched Sweden's shores drift by. The hilly islands were thick with trees and nearly every rise had a brightly-painted cottage perched on top of it. Maroon walls with white trim seemed to be the most popular style. This crisp scene was a perfect tonic, washing away the disappointment of the previous day's traveling. 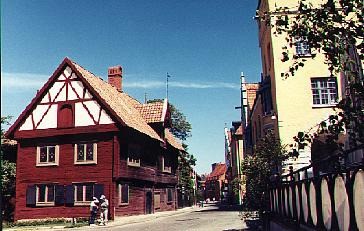 Medieval houses, Visby, on the island of Gotland

We were off to Estonia, Russia and Finland. Five days later, though, we were back in Sweden, when our ship stopped at Visby, on the island of Gotland. Visby is known as the Town of Roses and Ruins, and is a gorgeously-restored medieval city encircled by 13th-14th century walls. With its historic buildings and flower-bedecked homes, every street is picturesque.

I bought a walking guidebook and we traced its route down streets of tiny, colorful homes, garlanded with red, yellow and pink roses, inside gray stone churches and abbeys, climbed into circular towers overlooking the walls, and across charming squares lined with pastel buildings and sun-drenched cafes. Sharon was reminded of Massachusett's Nantucket Island while walking around Visby. Both are immaculately kept up, both have a nostalgic feel. The houses on both islands seem to be more summer homes or retiree's nests, rather than a town with a workday rhythm. As such, Visby is a popular vacation spot for Swedes. 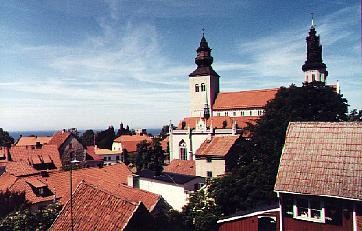 We explored Visby at a leisurely pace, and ended our visit with a late afternoon beer in one of the cafes. Although Sharon and I did not have a lot of time to see Sweden, like the beer we drank, we enjoyed our taste of it. One day, perhaps we call again in its ports, and stay longer.

Posted by world_wide_mike 09:13 Archived in Sweden