Dubai is a Taste of the Exotic in a Tiny Country

Mishap with lost bag doesn't spoil the sights or experiences 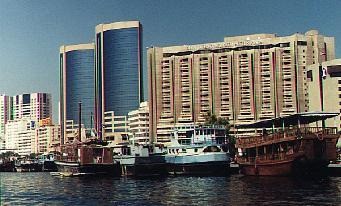 Shopping for underwear in NOT how I like to begin a trip to a foreign country.

Yet, there I was, in Dubai on a Saturday morning -- wearing the same clothes I'd put on Thursday afternoon, looking for a new set. In London, Emirates Airways had forced me to check my lone bag (a carry-on) because it was too heavy. Too big, I'd heard before, but never too heavy. And surprise, surprise, it wasn't on the bag belt Friday night when I finally made it through customs. I'd figured it'd been stolen since it took me more than an hour to clear passport control. By the time I filed my claim with the airline, the hotel driver had left, figuring I'd missed the flight. So, it was well after midnight before I got to bed -- not a good start, to say the least!

The first day was a tad painful, at times. I'd worn my dress shoes on the flight, planning to switch to my walking shoes during my stay. My itinerary, culled from my Lonely Planet guidebook, called for a lot of walking. However, both guidebook and walking shoes were in the bag. Thank God I'd pulled my camera out before checking it!

Lest anyone think the United Arab Emirates was a "trip from Hell," it actually wasn't. I saw quite a bit of the city of Dubai that first day. A "free trade port," Dubai is kind of like a Middle Eastern Singapore or Panama. An ocean inlet (called "The Creek" for some reason) twists like a river through the city, dividing it in two. The crowd of modern skyscrapers looming over the old-style, wooden boats along the water front is quite picturesque. It seemed an Arabic town in only the vaguest of ways. More like a cosmopolitan Eastern city with Arab spices -- mosques, traditional wind towers to catch breezes and funnel them down into the building, and occasional walled, sand-colored, century-old sheik's homes.

I wandered through the Souks, or bazaars, smelling the exotic spices, looking at racks of gold jewelry and bundles of multi-colored, shimmering textiles used to make traditional clothing for the large Indian community. As a matter of fact, I'd estimate half of the population of Dubai is NOT Arab. Besides the numerous Indians, there are Pakistanis, Bangladeshis, Afghanis, Orientals, Europeans and Africans. While strolling amidst this polyglot crowd, twice I almost purchased a pair of sandals to wear for the remainder of the trip. I held off, hoping my bag would show up.

Later that night, the hotel said Emirates thought the bag might arrive on the 9 pm flight. Phone back at 11 pm, they said. After an excellent Chicken Shish kabob at Pumpy's Restaurant, I went to bed, setting my alarm to phone Emirates at 11 pm. My spirits climbed about 11 notches when they said they had it, and would deliver it that night. The next morning I was so happy to see my bag. It reminded me of a time in O'Hare that Sharon hugged her suitcase after it finally showed up on the belt following a several hour wait. I almost did the same. 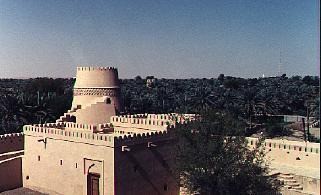 So, it was in my good walking shoes, armed with guidebook, that I set out the next morning for the town of Al-Ain. Built upon a desert oasis, it straddles the border with the neighboring country of Oman. No visas are needed to cross over, so I was a neat way to get a taste of another country (and another flag to put on my apartment bannistar!). The Al Khandaq fort in Oman proved to be the highlight of the day. Its 400-year-old walls and towers have been extensively restored. I roamed the battlements and climbed the ladders to the top of the towers. No other visitors were there -- I had the whole fort to myself! The view of the oasis from atop the towers was great.

The Souk in Oman proved to be a disappointment -- mostly food and household items. I was hoping to find one of those curved, Omani daggers to put on my wall. The difference between the Oman side and the UAE side of the town was striking. It is the emir of Abu Dhabi's hometown, and he has lavished money on the UAE side, turning it into a garden town, with flowers, green grass, and ornamental sculptures in the middle of the traffic circles. The Al-Ain museum is very large and modern, too, for so small a town.

I had an interesting taste of Gulf Arab culture when I bought stamps at the post office. It took a half hour to get to the front of the line, mainly because of the multitude of line jumpers. Arab women are encouraged to walk immediately to the front. The wealthier native Arabs do the same. The rest of us riff-raff foreigners must simply suffer it.

Upon returning to Dubai, I finalized my arrangements for Monday's desert safari. Since the company wouldn't be picking me up till 3:30 pm, I had quite a bit of time to polish off my Dubai sightseeing. I shopped at the Gold Souk, took a boat ride up and down The Creek, and photographed some of the mosques.

The hotel manager was VERY accommodating. Since my flight to London left at 2:45 am the next morning, he let me wait till 3 pm to check out, then said he'd give me a room to shower and change when I returned from my safari -- at no cost for the day. I was in the lobby when the Toyota Land Cruiser arrived to pick me up for the safari. I immediately hit it off with my three companions -- an Englishman and a young, Scottish couple. Our driver/guide promised four-wheeling up and down the sand dunes would be a blast -- and it was. I'd been hesitant about the safari, feeling it might be too touristy. It was awesome, though.

A couple of times, when we bounced to the crest of a dune, and looked down the steep, sandy slope, we all gasped, "No way!" An automobile couldn't make it down without flipping or rolling! Yet we did. Sometimes, the driver would let off the gas and we would slowly slide down by ourselves -- gravity and the slippery sand doing more of the work than the wheels. It was more like skiing than driving. The scenery around us heightened the experience -- the sun sinking in the west, the occasional camel plodding past, the wind-rippled surfaces of the dunes. It was quite memorable.We stopped at a camel farm, where racing camels are trained. I'd always heard that they were ill-tempered brutes, but these were docile as sleepy dogs. You could pet them, hug them, pose with your face next to theirs, mimicking their ridiculous expressions, and they just stood there placidly.

Afterwards, we bounced in our land cruiser to our camp site, where we'd have our Bedouin Barbecue. The camp was set in a tiny valley surrounded by high sand dunes and a circular wooden fence. First off, we tried our hand at sand boarding, which is exactly like snow boarding, except you do it down the dunes instead of ski slopes. We warned to fall backwards if we felt ourselves tumbling. In our group's various trips, only one of us made it down all the way without falling. I made it very close before pitching forward and promptly forgetting the warning. Sand was in my hair, my ears, my face, my neck -- everywhere. It was a blast, though!

We celebrated with a few Heinekins, and a camel ride around the stockade. I was disappointed no Arab boys ran up shouting, "El Lawrence! El Lawrence!" Next, was the belly dancer and the barbecue under the bright desert stars. All in all, it was an excellent evening.

On the trip home, I was glad of the shower, for the flights seemed to drag. From the time I left for the airport, till getting home, it was 31 hours. I took three flights through nine time zones. This time, my bag rode with me the whole way, though. So, upon arrival, shopping for new underwear was mercifully not required.