Rome & Venice are highlights, but Ravenna and San Marino impress, too

Other trips to Italy:
Summer 2015 Educational tour with my students
Solo trip to southern Italy (solo) 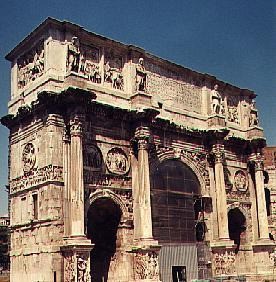 My most recent trip to Italy, I figured, would be smooth sailing -- no surprises. This was my third time there, but the first for my girlfriend, Sharon. The bulk of our time would be spent in Rome and Venice, which I had visited before. As it turned out, this was to be a vacation of surprises.

The only unpleasant one, though, occurred right away. Due to weather delays in Chicago, we couldn't fly out Sunday night as planned. Our Monday afternoon departure forced us to compact our time in Rome.

Our hotel was near The Vatican, which we would visit the next day. Our first was spent touring Rome's antiquities -- the Colosseum, the Forum, etc. As we emerged from the Colosseo subway stop, Rome's landmark stood before us, basked in sunshine. Its size stops you in your tracks, so we paused, drank a bottle of cold water, and admired it. Sharon was amazed at the contrast of modern traffic buzzing by the nearly 2,000 year-old structure.

Once inside, I was pleasantly surprised to find the upper tier was open (last time here, it'd been closed). As you walk around various points of its oval, the views were impressive. Nothing funny happened on our way to the Forum, our next stop. At first sight, the Forum is an incomprehensible clutter -- a ruined building there, just a couple of columns here, rubble in other places, and temples that were turned into Christian churches. With a guidebook and time to let it sink in, the heart of ancient Rome takes shape around you. Some of the buildings and monuments were closed off or encased in scaffolding. Unfortunately, this included Titus' Arch and the House of the Vestal Virgins, two of my favorite Forum sights. We did see the Arch of Constantine earlier, though, by the Colosseum. It remained impressive.

Sharon wanted a glimpse of the Vestal's house, so we climbed the Palatine Hill, which looms over the Forum. The wooded slopes blocked most of the view, but we did find another surprise atop the hill. Sprawling across the slopes were the massive ruins of the Palace of Domitian. How I missed this on my last visit, I don't know. Off the beaten track, and hidden amid the trees from the hubbub of urban Rome, the ruin has a desolate beauty. The westering sun struck a red glow from the rocks and ankle high grass. We finished a busy day with stops at Trajan's Column, the Trevi Fountain and the Spanish Steps.

The next morning we made our pilgrimage to St. Peter's, and joined the crowd tiptoeing through the massive church, gazing up in awe at its gilded splendor. Sharon was deeply moved by its beauty and majesty. Next, we strolled through the Vatican Museum, examining classical sculptures, paintings, artifacts (including Egyptian mummies) and other treasures that the church has collected through the ages. 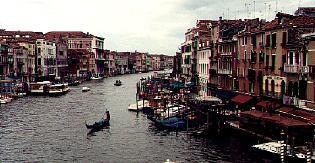 Then, we flew to Venice -- the stop Sharon most looked forward to. I had told her that Venice is the most gorgeous city in the world. As we slowly curved our way through the Grand Canal aboard a vaporetto (water bus), and the rows of palaces, domed churches, striped piers, and gondolas revealed themselves, I saw her face light up. I knew she agreed. We had timed it perfectly, too. The evening sun caused the pastel shades of the stucco facades to glow neon colors, and the water to sparkle as the busy boat traffic cut patterns in it. Venice was our city to take it easy and relax. Although we did see St. Mark's Square, went to the top of the Campanile for the view, and climbed the Rialto Bridge, we did it slowly, savoring the city. I still say Venice, La Serenissima (Most Serene), is the most beautiful city.

Sadly, the time to leave Venice came, and we chugged southwards by train a couple hours to Ravenna. The glory days of Ravenna came around the fall of the Roman Empire -- one of my favorite periods of history. A half dozen churches, baptisteries and mausoleums contain 1,500-year-old mosaics. We were stunned by their color and liveliness. The colors looked as fresh as if they were mixed on a palette this morning.

One mosaic, inside the Basilca San Vitale, had a scene I recognized from a couple of my books on the Byzantine Empire. When I saw it, immediately identifying the Emperor Justinian and his guardsmen, I nearly jumped at the thrill. I hadn't realized this mosaic was in Ravenna. Later, we had our best dinner of the trip at the Ristorante Gardelia in the city. 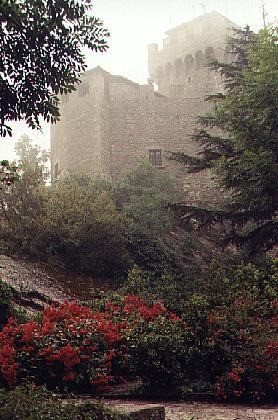 The next day was one of the true disappointments of the vacation. The weather turned very cold and very rainy for our day trip to the Republic of San Marino -- a separate nation located completely inside Italy. It is a couple hours south of Ravenna, and is built on a towering,craggy hill. The mist closed in on the city and we saw little of its famous views from atop its castles and towers. We shivered through most of the day, getting only occasional teases of what it would be like, when the rolling mist cleared in the valley, and we saw the villages far below.

The next morning came too early, as we took a 5 am train to Milan for our flight home. It had been a fun week, which went by way too fast. However, in every city there had been surprises, contrary to my expectations. It just shows that Italy is a land so thick with sights and wonders, that three times three trips there would not be enough to have seen it all...

Posted by world_wide_mike 07:56 Archived in Italy