If History and the Exotic Entice You, Go to Istanbul 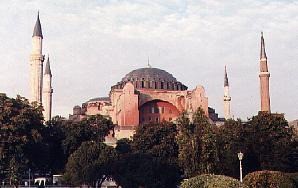 Built by the Emperor Justinian in the 6th Century A.D., the amazing St. Sophia Church, Istanbul

Many people are awakened Monday mornings by an alarm clock. Last Monday, mine made a much more eerie, exotic sound. At 6:14 am, the mullahs began their call to prayer for the Istanbul faithful. It echoed across the quiet, sleeping city, half song, half chant. It was a beautiful sound.

We had arrived in Turkey a day later than anticipated -- the flights from Newark, Boston and JFK had been full on Saturday night. So, our first decision was an unpleasant one. We pared Izmir with its nearby ruins of Ephesus and ancient Pergamun from our itinerary. We flew directly to Istanbul and spent all three days there. We stayed in the"Sultanahmet" quarter -- the old city -- within the old Byzantine city walls.

The first afternoon we spent orienteering ourselves, then visiting the Hippodrome (no stadium left, but several obelisks), the old sea walls and the ruined Palace of Boucephalon. Night fell very quickly, we learned, as it was dark by 6:30 pm.

The next day was our "big sights day." We started at the Aya Sofya, or former Byzantine church of St. Sophia. The huge dome was amazing, even more so when you realize it was built in the 6th century AD. Some of the mosaics the Ottomans plastered over had been restored, but it still looked like a mosque with the oriental decoration. Of course, the four minarets added on by the Turks after they took Constantinople helped, too. It was neat to pace around its dimly-lit interior, knowing that this was the place nearly all Byzantine emperors had prayed. And it was where the final emperor held mass before he marched out to his death as the city fell. Very humbling.

Next we crossed to the Sultan Ahmet or "Blue Mosque." This was a "working" mosque, unlike Sofya, so we had to remove our shoes to go inside. Where Sofya had given a feel of gray stone all around you, this was a much more colorful, luxurious feel. The wall to wall Turkish carpets were plush, and the decoration on every foot of the inside was ornate. As you padded around the interior in your socks, it gave the feel of walking through a wealthy family's unused, over-decorated living room. Despite the throngs of people, there was a feeling of rest and quiet. 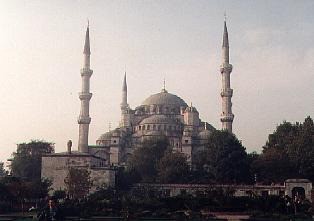 The Blue Mosque, across the street from St. Sophia, Istanbul

After that, we were off to the Byzantine cisterns. They are underground, lined with columns, and constantly dripping water. The level in the cistern is only about a foot, now, and wooden planks meander a path through the maze-like interior. Up until recently, they played classical music with colorful lights in the cavern, but some apparently felt that was too tacky. Now, it is a modern art exhibit, of sorts. Several screens showed a weird clip of someone blowing up a balloon (with the camera inside it, and close-ups of their mouth). The speakers made the hiss of air echo throughout the cistern, mingling oddly with the ever-present sound of dripping water.

Then, we were off to the Covered Bazaar -- another cavern of sorts. This one, though, was thronged with people, the lights of the shops gleaming on the gold, ceramics, inlaid boxes, swords, leather, carpets and myriad other things they were selling. It reminded me of the old markets of Jerusalem, Mexico, Greece -- you name it. The shop owners enticed passers by with offers of bargains, and the scale of the place overwhelmed the senses.

Next, we took a quick cab to the old Byzantine city walls. This was my traveling companion's favorite part, and it struck my history nerve deeply, too. We wandered around on them for an hour or so, climbing up towers, admiring the view of the sea and city. I pictured myself as a Byzantine soldier, pacing along the walls, looking out at the empire's enemies -- Persians, Slavs, Bulgars, Arabs -- none of them pierced the walls. 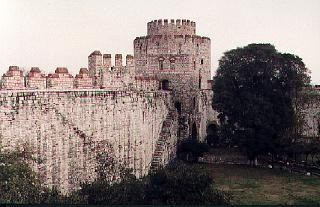 From there, we crossed the harbor to the Galata Tower. The view from the tower was impressive -- the Asian side was a haze pierced by the slender barbs of minarets, while the old city was clearer. I could identify Aya Sofya, the Blue Mosque, and several others we visited that day.

Our final day began with a wander through the grounds of Topkapi Palace, which is on the tip of the Golden Horn -- as the peninsula the old city was built on is called. Most of the palace is a museum with clothes, jewelry, porcelain, arms, paintings, etc., behind glass. I did get to see the sword and bow of the Prophet Mohammed, which was neat. The grounds were the best part, though. The luxury of the sultans could be easily imagined as you moved from ornate room to even more gilded ones.

Next, we took a small boat tour of the Bosporous, the strait that separates Europe and Asia. It gave a good picture of how far along the banks metropolitan Istanbul sprawls. We landed at a small, rather touristy village on the Asian shore (allowing my companion to stake his claim to visiting Asia), too. The best part was seeing the bustling waterways of the city, and the views from the water of the city, with its hills and their crowning mosques.

Finally, it was back to the Covered Bazaar for our required souvenir purchases. I think I wore my friend out as I pursued the ultimate bargain for more than an hour. I enjoy the haggling over prices, and set a (cheapskate) amount I'm willing to pay for an item. It takes awhile before I find a store willing to sell the item for that amount, though.

Our flight home the next day was not worry-free, though. We got the last of several open seats out of Istanbul, had to twist the arm of the Lufthansa agents in Frankfurt to let us fly to Chicago instead of Boston, and then nearly got stranded in Chicago! My lovely airline, America West, canceled one of its flights to Columbus. The extra passengers then filled up all the other airlines' flights, plus some. However, they sent too many (as it turned out) to O'Hare to ensure everyone got there, which left a few empty seats on the final Columbus flight of the day. We gladly took those, and ended our 24 hours of flying at about 11 pm, Thursday.

All in all, it was a great trip. Istanbul was modern and accessible. My few words of hastily-learned Turkish were completely unnecessary. The city does seems to drip with history and exotic sights. And if those things are "calling" you like the mullahs from the minarets, I highly recommend it.

Posted by world_wide_mike 19:25 Archived in Turkey