Plenty to see in a Quick Trip to Portugal 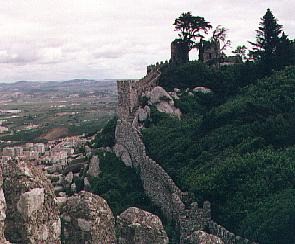 Moorish Castle in Sintra, an easy day trip from Lisbon

When Continental Airlines announced new service to Lisbon, Portugal, my globe-trotting coworkers and I hatched plans to fly there. Since it usually takes a few weeks for new routes to catch on, we felt there should be plenty of empty seats for us standby, airline employees. Our guess proved correct, and on a sunny Spring morning in 1997, we began our exploration of Portugal.

Overlooked by a castle on a hill, Lisbon is a pretty city with Mediterranean colors -- varying shades of white buildings with burnt-orange terra cotta roofs. The city trams proved easy to use, allowing us to range wide across Lisbon our first day. Along the murky blue waterfront, the Belem Tower is a signature landmark. It also proved an unintentionally amusing sight. The 12th century fortification guarding the harbor was encased in scaffolding, which itself was masked by a photo-like screen colored to look like the tower restored. From the distance, we hadn't noticed, and were fooled.

High above the city, the castle proved the "real thing." It was peaceful, pacing the walls and climbing its towers. Over the centuries, a grove of trees has grown up among the castle ruins, giving it a park-like atmosphere. The views of the city below were gorgeous.

The next morning, we took a commuter train 45 minutes north to Sintra. Its pastel-colored Renaissance era buildings were striking, but were overshadowed by the ruins of a Moorish castle brooding above it on a craggy, forested hill. Its slopes proved more difficult to climb than Lisbon's castle, but the sprawling, gray-stone castle was worth it. The outer walls rose and fell with the contours of the slope. Their triangular crenelations and narrow, frequent watchtowers matched the mood of the threatening gray sky above. It didn't take much imagination to picture helmeted Moors staring out across the countryside, standing watch in a warlike time for Christian raids. On the other side of the hill, the mood turned whimsical, with the palace of a 18th century Bavarian noble. Its gaudy colors and varied architectural styles showed Moorish, Germanic and even Ancient Egyptian influences. The two hilltop buildings could not have been a greater contrast. 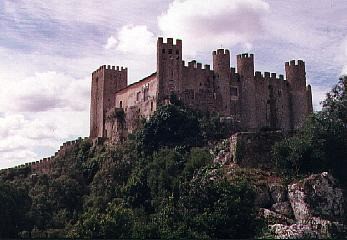 On our third and final day, we rode the train north to the walled medieval town of Obidos. Here was the essence of Portugal. Bright flowers spilled over the walls and gardens of all the interconnected white homes of the residents. Moss clung to the walls of the excellent town castle, and the terra cotta roof shingles were every shade from light gray to new orange to weathered brown. The cobbled streets were narrow and worn smooth by the traffic of the years. From atop the extensive, tan-colored stone walls, you could look out and trace the line of a disused Roman aqueduct stretching past olive groves and a crowded cemetery. It was a peaceful, scenic place to wander around for an afternoon. 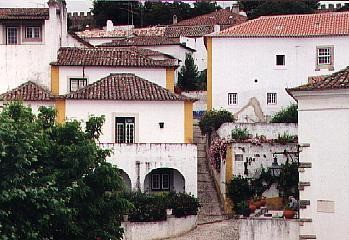 Three days was too short of a time to see Portugal, of course. However, the sights were memorable and the colors bright in our memories. Much like the country's signature liquor, Port, which comes in small glasses -- our trip to Portugal had a rich, pleasing flavor that left us wanting more.

Posted by world_wide_mike 06:36 Archived in Portugal