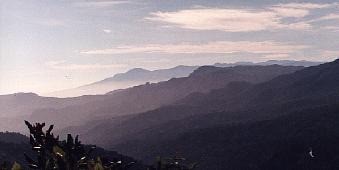 When I think back on some of my trips, it is the sights I remember most. On others, it is the scenery. On my trip to Costa Rica, it is the people.

I had planned a quick, three-day trip to Costa Rica on free tickets that a coworker at America West Airlines had passed along to me. I arrived late at night in the capital, San Jose. The next morning, I bumped, bounced and even slid my way on a bus through the jungle and hills to Monteverde Cloud Forest. The road there varied from modern blacktop to gravel to little more than soggy dirt. Monteverde, several hours north of San Jose, is basically a rain forest on top of a mountain range. Upon arrival, I was treated to the sight of tendrils of clouds drifting up the slopes around me, like ghosts on a slow, silent mission.

I found a hotel/hostel in the village nearby. It was there that I met the people who were to make Costa Rica so memorable for me. I was resting from my tour of a butterfly preserve earlier in the day (Costa Rica is known for its incredible number of butterflies), when I heard voices outside my window, on the pleasant hotel balcony. It was early evening, and the other guests had begun to collect on the balcony's chairs and benches. I got up and drifted in, as did others, all joining in the conversation. It was an international group -- German, American, Welsh, Scot, etc. Two girls from California were describing their day hiking the trails of the Cloud Forest. Since most of us planned on doing that the next day, we listened entranced.

Eventually, we noticed it was dinner time, and we all went down to the hotel restaurant together. It was a wonderful evening. We traded stories from our various international trips. The German, Dieter, told us about journeying down Central America from Mexico to here -- including an unnerving evening spent walking the deserted streets of San Salvador (El Salvador) alone at night, looking for a restaurant. Annie, the Welsh girl, told us about her visit to Angkor Wat, the stunning, jungle-clad ruins in Cambodia. We all talked into the night, kindred spirits. It reminded me of my youth hosteling days in Europe a decade and a half before. Four of us finished the evening making plans to share a cab to the Cloud Forest first thing next morning. 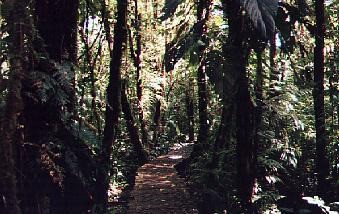 Path through the cloud forest

We arrived at the entrance just past dawn -- before it even officially opened. Visitors are permitted to come early, though, to catch sight or sound of some of the wildlife active at that time. The grunts of Howler monkeys through the trees not far away were our first thrill. We quickly split up on the trails, each having different goals. Dieter crept slowly along the trails, hoping for sight of the resplendent quetzel bird. I was off to the scenic overlooks, deeper inside the park. At one point, the chirps and creaks around me suddenly cut off like a shut door. As I looked around the thick, green vegetation around me, it was eerily quiet. My mind raced. Weren't there jaguars in Monteverde? There was a rustling in the underbrush. When I caught sight of a tiny rodent scurrying along, I sighed in relief. It must have been ME that frightened the creatures into silence and my imagination that magnified a mouse into a stalking jaguar!

The day turned out gorgeous, and the scenery was green and striking. I had a great day hiking, and saw a fair amount of wildlife -- no quetzels, but spider monkeys, blue morpho butterflies, hummingbirds and the large Black Guano bird (I think that is what it was called...). In the evening, we reconvened on the balcony and recounted our experiences. My friends enlightened me on the strange, deep boom I'd heard off and on throughout the day. It wasn't thunder, like I'd guessed, but a nearby volcano. I had wanted to see one of Costa Rica's active volcanoes (my new friends assured me the night lava eruptions were spectacular), but my trip didn't include the time. At least I'd heard and felt one, though! 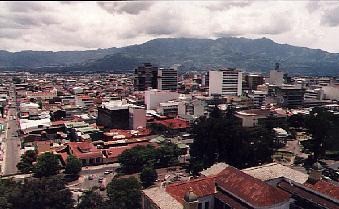 That night, we said our goodbyes. Next morning, I bounced back to San Jose on the bus and spent the day sightseeing in the modern city. The artifacts of the Gold Museum and the colonial architecture of some of the homes were the high points. For dinner, I indulged in a light-hearted tradition I'd begun a couple years ago: Pizza Hut in a foreign country. Some may laugh, but since it is almost always possible to pay by credit card, it is a good way to conserve your local currency towards the end of a trip. Afterwards, a rainstorm cloaked the city, and I wandered along the shop fronts. I missed the company of my traveler friends, but the Costa Ricans -- or Ticos as they are called -- are a warm people, too, and made me feel welcome.

Although I will always remember the sights and sounds of the Cloud Forest, it is thoughts of the kindred spirits I met in Costa Rica that bring my memories teeming to life, like the birds and monkeys in the jungle canopy.