Cold a Surprise, But History a Thrill in Poland 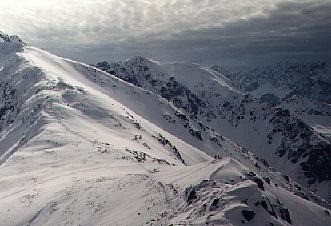 The view from atop Mt. Kasprowy, Poland

After months of pestering him like a court jester, I finally coaxed a coworker out of his LOT Polish Airlines passes, and made plans to fly to Warsaw in October. I read my usual handful of guidebooks, but missed one important fact in my planning: October in Poland is more like early December in Columbus!

There were no signs of cold when I landed, though. I quickly took a train to the town of Krakow. Since I'd been unsuccessful in picking up rudimentary Polish, I used Lonely Planet's suggestion and wrote down (in Polish) my destination, class of service desired and time of departure. This I handed to the station attendants who promptly punched up my ticket. This method (like the Polish trains themselves) worked perfectly. 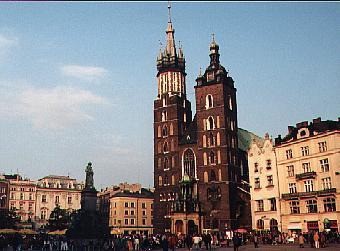 I found a hotel in Krakow's walled Old Town and set off to explore for the rest of the evening. The main square was huge, with a mix of Renaissance and medieval buildings, including an excellent brick cathedral chiming the hour. My sightseeing began in earnest, though, the next morning. After a large breakfast, I stepped outside with guidebook in hand and camera bag on my shoulder, and gasped. The temperature had dropped drastically. It was a damp, misty day, which gave an additional knife-like edge to the cold. I quickly retreated inside and added an extra layer.

The churches, palaces and museums were heavy with medieval atmosphere and color. My heart soared at the sight of actual cloth banners borne into battles I'd read about. I ran my hands along the armor of Polish Winged Hussars (feather lined wings sprout from the back of the heavy plate armor), walked inside a intricately decorated tent captured from a Turkish general and thrilled at the row upon row of swords, pikes and lances. I reentered the Old Town through the massive, round, seven-towered Barbican fortification that guarded the main gate. Just inside, the town walls were topped by wooden galleys festooned with colorful paintings for sale by local artists. The chill was long forgotten -- it was an excellent day.

Next morning, I caught an early bus to Mt. Kasprowy. As I rode the cable car towards the top, eager for views of forests, mountain meadows and the miles of hiking trails my guidebook assured were waiting for me, I began to wonder at the winter coats of the other passengers. And what were those boards they were holding? As we reached the top, I stepped off...into winter! The mountain was covered in a foot or more of snow. My hooded sweatshirt and windbreaker vainly battled to keep out the cold as I watched the snowboarders trudge through the drifts towards the slopes.

The view was magnificent, though. It was like the Alps or the Rockies -- snow-capped peaks and icy mountain lakes in every direction. I slipped along the trail that ran atop the ridge as far as I dared, stopping from time to time to look around and breathe in the feeling of being on top of the world. Another blast of cold in Poland -- unexpected, but a joy nonetheless.

I thawed out on the ride back to Krakow and was ready for my trek to Church and Hermitage of the Camaldolese monks a few miles outside of town. The monks are supposed to be a particularly grim sort, whose motto is, "Remember, you must die." I spotted one of them hoeing a garden, dressed in an undyed wool robe, red boots and gray hat. The monastery's greenish bronze "onion" domes, orange tile roof and blond-colored stonework gave a pleasantly somber medieval feel. I continued a tradition later (dinner at Pizza Hut in a foreign country) in the cellar of a 13th century building. The medieval flavor of Poland was definitely to my taste.

Next morning, I took the train back to Warsaw and spent the day seeing its sights -- the towering, massive government building, the completely reconstructed Old Town, and a Polish army museum (more winged hussars with fighter jets mixed in!). The following day I took a side trip to Malbork Castle -- the sprawling, red brick bastion built by the crusading Teutonic Knights to guard their Eastern European conquests. 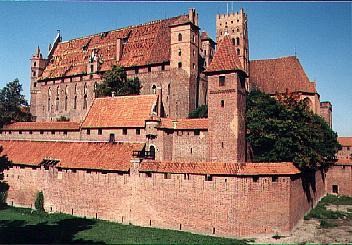 It was amazing. I spent hours wandering through it -- across drawbridges, through halls, up the stairs of towers, along the walls -- a history buff's dream! That day was also the first of "off-season," so I nearly had the castle to myself. Once I was done exploring, I crossed the bridge and photographed it from across the river. The dull orange of the brick walls and the brighter reddish tone of the roof tiles shone in the dazzling sun. The flawless blue sky was matched in deeper tones by the lazy, duck-filled river winding past the castle. A more gorgeous day could not be asked for. Krakow's misty cold and the mountain's snows were forgotten in the warm, October sun.

The next day I returned home. Poland had been full of surprises. The brisk cold was notable, but by far more prominent were the warm memories. Castles, cathedrals, medieval town walls -- Poland was steeped in history. I will remember its sights well into the December of my years...

Posted by world_wide_mike 07:09 Archived in Poland