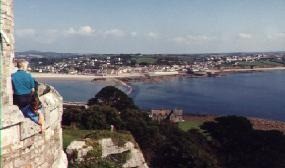 I've been to England a good number of times, but the best visit was probably my coast walking trip to Cornwall. I flew in on Virgin Atlantic and six hours later, hopped off the train in Penzance. That night I watched a local Rugby game and had a pub dinner.

The next day I visited St. Michael Mount, crossing the foot path to the islet at low tide. I hiked up to the castle and explored its interior. The views were superb -- it was easy to dream what it would be like to live in this tall, stone house overlooking the Cornish cliffs below. The windows were placed for great views -- you could look down and see the waves crashing against the rocks far below. From the ramparts, as I watched the waves cover the causeway, I decided to take it easy the rest of the day since my hiking began the next day.

I had bought an excellent guidebook/map ("Walk the Cornish Coastal Path" by John H.N. Mason). For the next four days, and a fifth day later in the trip, it was up and down the hills of the coast (and occasionally across a meadow, forest or rocky shore). The scenery was spectacular. Time and again, I thrilled to the waves slamming into the rocks, the wide blue sweeps of bays and the sparkling slices of beach like wedges of melon. And always, looming above, the green hills with their bald brown rocks peeking through and tufts of heather and meadow grass atop. 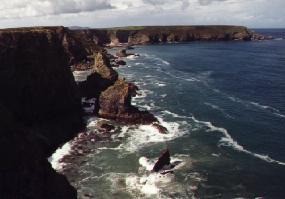 The much-billed "Land's End" was interesting and picturesque, but was a cold dash of tourist crowds compared to the solitude of most of the path. And speaking of cold dashes, be prepared for rain showers. My first two days hiking I was soaked through by the end of the day. A Cornish lady had told me, "We don't get weather here -- just 'bits' of weather." A little sunshine, a little cloud, some rain, more sun, more rain, and so on. I hiked from Mousehole (where I'd taken a bus to from Penzance) to St. Ives. My nightly stops on the way were at Bed & Breakfasts at Porthcurno, Botallack, Zennor and St. Ives. I also hiked from Polruan to Polperro after a couple evenings spent in the seaside towns of St. Ives, Falmouth and Fowey. My favorite section was from Porthcurno to St. Just, with great views at Land's End, Pendower Cove, Carn Les Boel and Whitesand Bay.

Although my hike was linear from Mousehole to St. Ives, I'd recommend a different method for those following in my (often labored) footsteps. Take a bus to Botallack, for example, and get a B&B for two nights. Stow your stuff and take another bus to Zennor. Hike from Zennor back to Botallack. The next morning, take a bus to Sennen Cove and hike back to your B&B from the other direction. That way, you treat each as a "day hike," taking along only camera, water, food and rain gear. Keep the clothes and heavy stuff back in the closet of your room. Cornwall's excellent bus network (buy a schedule at the newsstand) will enable you to pull this off. 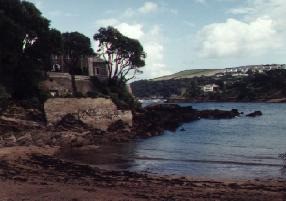 Cornwall's seaside towns are a joy, too. Each one's harbor is unique, it seems, but all seem to have the same quaint houses, brightly-painted boats bobbing in the water, and pleasant pubs where you can sip a cider and look out across sea and sky. I spent two nights each in St. Ives, Falmouth and Fowey. Falmouth's castles -- actually Renaissance era "star forts" -- were interesting, and all three were pretty places to wander along the waterfront or check out old churches, watch towers and beaches.

Whether you're a walker, a town shopper or a history buff, Cornwall is definitely worth "taking a hike" to visit.