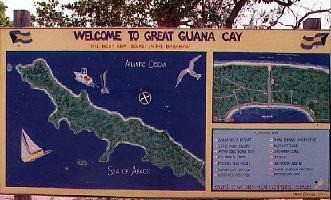 The first out-of-country trip I took after starting at America West Airlines, was a several-day idyll in the Bahamas. After reading up a bit on the country, I decided that I'd rather visit one of the "Out Islands" -- rather than Nassau or the big, touristy areas. So, I chose Great Guana Cay, a tiny spit of land off of Marsh Harbor in the Abacos. We flew America West to Orlando, then an United Express prop plane to Marsh Harbor. A boat from the resort zoomed us across the water to Great Guana Cay.

As we were to find out, the resort was the ONLY thing on the island, other than beaches, homes of the residents, and facilities for them. The resort was the only restaurant on the island as well. This was no problem, though, as it was an excellent place to dine. The tables were outside overlooking a nice, sunny bay. The photo below shows the view from our breakfast table, the next morning. 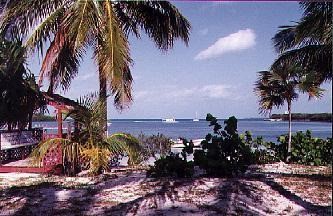 View from the Breakfast Table

The main selling point of Great Guana Cay was its miles and miles of isolated, undisturbed beaches. Although we did try a little snorkeling, our main activity was simply lying in the sun, soaking up the rays and gorgeous views. Back home in Columbus, it was a drizzly, rainy three days. Ours were the dream of every Midwesterner suffering under endless gray skies.

If the idea of a beach to yourself appeals to you, Great Guana Cay is the place to go in the Bahamas. 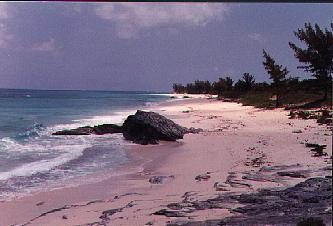 Posted by world_wide_mike 05:56 Archived in Bahamas