Squeezing in some sights and fun in down time

This trip hardly qualifies as a vacation. While in the Army Reserve, I spent two weeks in Panama and Honduras for annual training, or "summer camp." It was hard work -- long days, and not a lot of free time. Here is a picture of what our "camp cabins" looked like -- barracks at Camp Henderson.

However, it was wonderful for the memories. I still remember walking through downtown Panama City, when an Panamanian police truck screeched to a halt next to me and another unit member who were sightseeing. They ordered us in. We were thinking, oh great, kidnapped! But no, they were concerned we were in what they felt was a bad neighborhood, and simply giving us a lift to a nicer shopping area. And on the way to the nicer area, my irrepressible friend Van Kalvakis was trying to find something talk to the Panamanian soldiers about. Neither of us spoke much Spanish and they spoke little English. Van hit on, "Roberto Duran" (a Panamanian heavyweight boxer popular at the time), and the truckload of soldiers perked up, repeating the name. Ah, the memories...and the unintentionally funny things that happen during travel, whether it is as a civilian or military! 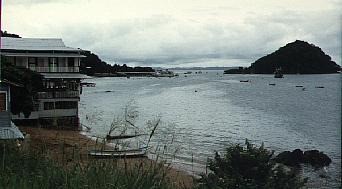 Posted by world_wide_mike 14:13 Archived in Panama