Scotland Serves Up a Feast for the Eyes

Remembering this as my most amazing trip, after all these years! 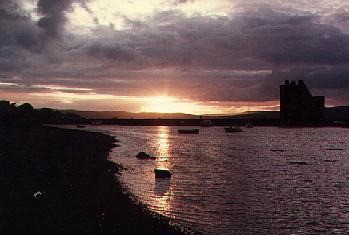 Sunset on the Isle of Arran

What can I say about something which, a decade and a half later, still remains the most magnificent journey I've ever taken? "Trip" or "vacation" are too mild of words for the five weeks I traveled across Scotland. It was simply a feast for the eyes and heart. My favorite ingredients in a destination, History and Scenery, Scotland serves up in platters.

Russell, Tom and I left Columbus in late summer, splitting up or recombining during the five weeks as we each sought out corners of the country that enticed us. Our first stop was the Isle of Arran, off Scotland's southwest coast. We then hitched our way past Glasgow to the bonnie (and rainy) banks of Loch Lomond, to the port city of Oban, then on to the Isle of Mull. This stark, gorgeous island was my favorite. We rented mopeds, which, though not glamorous, are an excellent way to see the countryside. You can pull over at any time, whether to clamber across the rocks to a waterfall or hike to some ruins -- without having to find a parking space, like with a car. You are still close to nature, hearing the crash of the waves, smelling the flowers -- but you aren't exhausted when you finally arrive at your destination, like you might on a bicycle. It is a great combination of speed and experiencing the land. 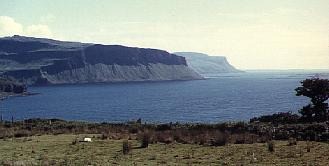 On Mull, we saw castles, brilliantly-colored double rainbows, deep blue lochs and green, sheep-dotted hillsides. Side trips to the isles of Iona and Staffa brought somber images of ruined, windblown monastaries, Scotland's graveyard of its kings, and oddly-shaped caves on islets tossed amidst the cold, majestic sea. Back on the mainland, I lingered beneath the green slopes of Ben Nevis (Scotland's highest mountain), and ferried to misty Lismore and its shrouded Viking castle.

From there, it was across the water again to scenic Skye. Gorgeous panoramas greeted us there, especially hiking in the Quirang, which for all the world looked like a a mountain range trying to poke up through a billiard table. The hillsides were a closely-cropped olive color, with brownish rock peeking through. Low areas were covered with still, silvery lakes that reflected the hazy sky. Waterfalls plunged down the cliffsides to rocky beaches. We also hiked cairn-topped hills that gave oil painting-like glimpses of the dragon-backed Cuillen Mountains. 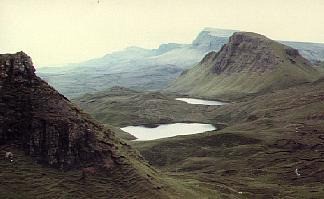 The Quirang, Isle of Skye

Another ferry from Skye took us further west to the remote Outer Hebrides and the isle of Harris and Lewis. We were drenched on our bicycle ride to the Standing Stones of Callanish. On the way, we roared at the sight of me "frothing at the knees," as old soap was worked into a lather in my soaked jeans by my pumping legs. We grew silent, though, as we approached the majestic stone circle. The spindly, 15-feet tall, grayish-white stones were arranged in the shape of a Celtic cross. The historical kicker is that it was built thousands of years before Christ. Callanish is every bit as impressive as the more famous Stonehenge, perhaps more so, because you can walk amongst the stones in relative solitude. As the sun came out, and we stood contemplating it, we were alone. Just the haunting landscape, an occasional gull, and the ever-present wind. Nothing further than the crowds on Stonehenge's Salisbury Plain could be imagined. 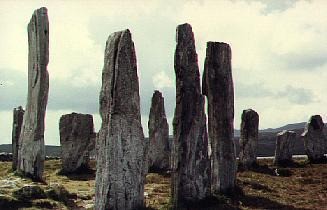 We made landfall at mainland Ullapool, splitting up again. Tom was off to the Orkney Islands, me to Strathpeffer, and then Inverness. I met Russell there, again. Together, we saw the city's sights, toured Culloden Battlefield, and then rented mopeds again for a day-long circuit of Loch Ness. The skies were sunny and the views beautiful: Ruined Castle Urquhart; mountain-clad Fort William at the loch's southern end; and late-summer greenery blooming on the hillsides.

I decided to hang on to the moped the next day, while cost-conscious Russell returned his. When I drove off, I didn't realize it'd be the last I'd see that trip of my companions. My sights were on a grand circuit of the Grampian Mountains. It was a fitting finale to my journey -- scooting through heather-clad hills ablaze with pink blossoms, exploring castles of different shapes and styles, and enjoying a day of Highland Games (caber tossing, bagpipes, highland dancing). I even spent a day with a Scottish Territorial Army unit, photographing and interviewing them for an article for my Army Reserve magazine back home. 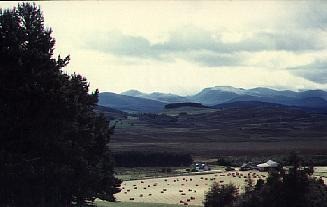 When my grand tour ended back in Inverness, I hopped a train to Pitlochry, where I'd hoped to meet Tom and Russell. I arrived late to find them not there, and the hostel and bed and breakfasts all full. I was tired, and took the last train to Edinburgh, instead. When we pulled in, though, I made the decision to stay on board. It was an express that terminated in London. I was spent -- mentally, physically and monetarily. The last gasp through the Grampians had worn me out. I was ready for home, despite the fact our scheduled departure wasn't for another several days.

It was probably not a fitting end to such a magnificent feast of sights that Scotland had served up to me. Sometimes, though, the meal is so filling that you simply cannot stomach dessert. And oh, what a feast it was! A decade and a half later, I still remember it as my most sumptuous ever.

Posted by world_wide_mike 17:57 Archived in Scotland