Lots of Churches, Castles, and City Sights Take the Edge off the Cold 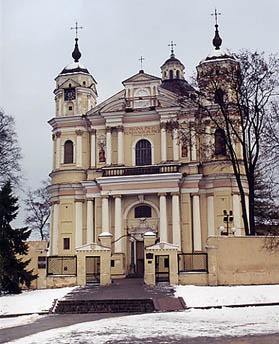 It took seven years and three attempts, but I finally made it to Lithuania. The only unpleasant surprise awaiting me when I finally landed in my star-crossed destination was an early November snowstorm.

Of course, knowing how far north the Baltics are, I should have expected as much. That and the roughly eight plus hours of daylight at this time of the year. However, the photogenic snow dusting the church steeples and trees of Old Town Vilnius made up for it, and my complaining about the bitter wind was only half-hearted. My travel companion, coworker Scott Thomas (who is of Lithuanian descent), and I plunged right into the sights shortly after landing in the early afternoon in Vilnius.

Our hotel, Mikotel, was on the edge of the Old Town, and we bundled up against the chill and struck off from there in the direction of the Center. We entered through the whitewashed "Gates of Dawn," pausing to look behind us at the very popular Catholic shrine overlooking the gates. I'd read that rising above nearly every block in Old Town were the domes or towers of churches, and it seemed true. Along with the pastel colored buildings and the fresh powder sugar snow on everything, it made for a scenic wander.

We were surprised how quickly dusk fell, but had a nice time picking our way through the winding Old Town streets. If we had a theme or plan, it was "church-spotting," and we managed to take in a good number of them before cold and growing hunger drove us inside to find a restaurant. Those who know me are aware that food is not one of my priorities while traveling, but Scott is a bit of a gourmet, so we made an effort on this trip to dine reasonably well. And no, I did not find a Pizza Hut (but did talk Scott into pizza and beer at a local place one night!). 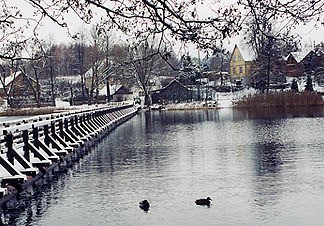 Trakei and its charming lakeside views

The next morning we were off to the old Lithuanian capital of Trakei, which is built on a peninsula surrounded by three lakes. Upon our arrival, the gray skies slowly softened and broke up into patches of blue, throwing an enchanting light on the lakes and the snug-looking cottages that lined its shores. Many of the homes are traditional wooden buildings, painted bright greens and yellows. Scenic as they were, it was the castles that drew me to Trakei. The first one we visited was on the peninsula itself, and was mostly in ruins. The walls, gates and scattered buildings that still stood stretched scenically across a wooded and hilly Winter Wonderland.

We then continued down Trakei's main street, stopping at a souvenir shop for some of Lithuania's trademark amber. The town's most famous site, the Island Castle, was next. As if scripted by Hollywood, the sun broke through just as we approached it. Its warming rays shone on the rich, reddish-orange of its brick walls and towers. The approach to the castle is equally dramatic, as you walk across two footbridges from the mainland to the island it is built upon. Reeds and trees line the banks making for a wonderful setting for the well-restored, 1400s-era castle. 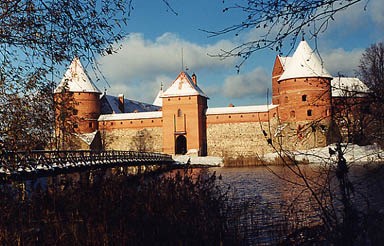 For the first time in Lithuania, we actually saw other tourists there (we could count them on our fingers, but they were there!). The interior of the castle has been turned into a rambling museum with displays on just about every aspect of Lithuanian history, recent and Medieval. The best part about the display rooms for me was they were heated! Actually, I enjoyed roaming the interior of the castle, especially the three level main keep built around a chilly stone courtyard. I wanted to climb to the top of the circular, brick towers, but they were closed off, perhaps a disadvantage of visiting in the off-season.

After a thorough exploration of the Island Castle, we slowly headed back through the snow-carpeted streets, pausing to take photos of some of the town's attractive churches. We then caught our bus back to Vilnius (heat is used quite sparingly on the public buses, we'd found that morning). Since lunch time had come and gone while sightseeing, we dropped by a local tavern near our hotel and enjoyed the special of the day (pork cutlet with cabbage salad, and uh, beer). Scott's command of Russian came into handy, yet again. He found more people seemed to speak Russian than Lithuanian in Vilnius. My ability to smile and nod in hopes that I guessed what they were talking about proved universal, as usual.

That evening, Scott wanted to check out "New Town" Vilnius. The wind was brisk, but we walked a wide arc through the area surrounding the Old Town. Scott seemed pleased, but I am more of a historic or scenic sights kind of guy. One row of apartments or modern buildings pretty much looks like another to me. Then again, Scott is an urban living kind of guy, so probably is able to appreciate such sights more. It was in his happy and weakened condition (from the day's walking) that I was able to talk him into pizza and beer for dinner. It was excellent, and remarkably inexpensive ($8 between us for a pizza and large beer each). 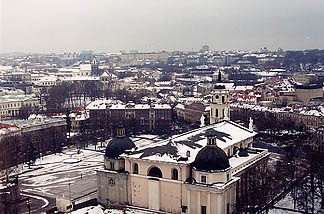 The next morning, our final one in Vilnius, was slated for the Old Town sights. We took up where our first day had left off with more church spotting. Many had services going on, which let us slip inside and enjoy the rich, decorative interiors. Particularly noteworthy was the baroque Church of SS Peter and Paul, with more than 2,000 stucco figures carved along the walls, columns and ceilings. Definitely one of those churches were your neck gets sore from pacing slowly along, head straight up, breathing, "Wow..."

Another highlight of the day was the hike up the small, conical hill in the center of town to the remnants of the castle overlooking Cathedral Square. The view from the windswept tower atop the hill was a swirl of pastel, snowy whites and cloudy grays -- as if a master painter had time to detail a few areas of the panorama, splashing bits of color in other places on the canvas to suggest more. Doubtless on a clear, warm summer day, it would look like a vibrant postcard. And on a cloudy Winter day, it would probably look bleak and cold were it not for the pinks and yellows glinting on the Old Town buildings. Either way, it was an interesting vantage of Vilnius.

Our original plans had been for a full week in Lithuania, with a side trip to Latvia. However, the flights on LOT Polish Airlines were once again not cooperating, booking up around the time of our planned return. This forced us to trim our trip with a Thursday return (the only day that there seemed to be plenty of seats). In turn, this meant that we had to take an overnight bus from Vilnius to Warsaw. Let me say this: Never again. Unless you're are a masochist, I do NOT recommend this route, as it was uncomfortable, cold and featured a more than 90-minute border crossing between Lithuania and Poland, complete with Soviet era "efficiencies" such as drunk border guards, misplaced passports and inexplicable delays. I have crossed more than my share of borders in my travels, and this was without a doubt the worst. Enough of that. If at all possible, fly. Do not cross borders by bus in this area of the world.

Despite the red star that loomed over our border fiasco, I found Lithuania was definitely worth the seven year wait. I wished I'd had time to see more. I'd definitely return again, one day...by plane...and in warmer weather!