Malaysia is a Pleasant Surprise & More Than Expected

Chinese, Hindu, and Malay blend to create a modern yet traditional city 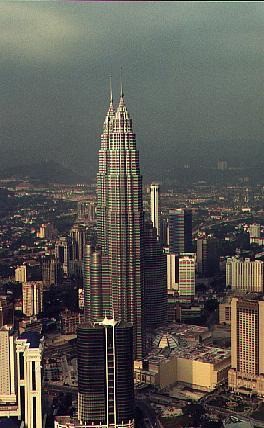 Towering, sleek, modern skyscrapers, colorful, intricate Hindu temples, spacious, gleaming mosques. It seemed strange that the images of Kuala Lumpur could be so many things, but still not quite what I pictured. Neither Gale (my traveling companion) nor I expected Malaysia to be so modern and accessible.

Yet there we were, plopped down in front of the Coliseum Hotel and Restaurant, after more than 20 hours in the air. It was hot -- much more so than I expected. And when the rooms at the hotel didn't live up to our expectations, it was hotter still as we walked the streets looking for a place to stay. After much backtracking, we found the Noble House Hotel and checked into its cleaner (and air conditioned) confines. After refreshing showers, we were revitalized -- ready to explore the streets of Kuala Lumpur.

We saw quite a bit that first day, too. The brightly-painted Hindu temples were a joy to explore. Every square foot was decorated with statues or carvings from the Hindu pantheon: blue-skinned men; elephant-faced deities; shaven-headed priests; archers; heroes; and princesses. This colorful bit of history contrasted sharply with the sight of the modern, twin KL Towers, gleaming like two spires of golden steel in the setting sun. The view from the observation deck we found overlooking the towers and the city was superb, giving a hundred-mile panorama of the city. 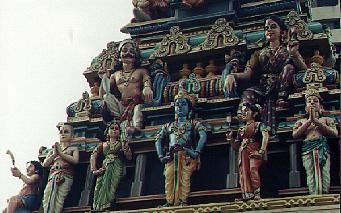 The next morning, I took a bus a couple hours south to Melaka, with its Dutch colonial background. This used to be the main city on the Malay peninsula until recent history and was resplendent in historic buildings. Chinese temples, Dutch churches, a stubborn stone gate tower (all that remains of Melaka's once-impressive fortifications), and gilded palatial homes of Chinese merchants made for hours of colorful walking. A boat trip along Melaka's river exposed the waterfront origins of the town, along with rows of traditional homes built on stilts. I even glimpsed a monitor lizard as it waddled out of the murky green water and up onto the bank. 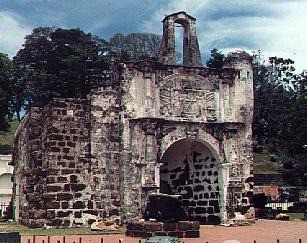 That night, I met Gale (who'd taken a day trip to Singapore) back at the Coliseum restaurant for Tiger beers and its signature, savory steak dinner. The juicy meat is plopped down onto a metal platter in front of you, then a bubbling broth is poured onto it. A hissing cloud of steam arises, diners shielding themselves from the heat by raising the edges of the tablecloth. The steam bath is the final touch, creating one of the best steaks I've ever eaten. 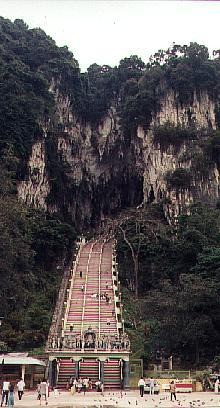 On our final morning in Malaysia, we took a taxi north to some limestone caves that were the site of a Hindu holy place. A wide staircase, decorated with carvings, leads to the top of the inner cave, which is partially open to the sky. Monkeys prowl the red steps, hoping for a handout. Sometimes, when disappointed, they take matters into their own, tiny hands. Gale was startled by one he named "Little Bastard" who leaped off a railing and snatched a bag of birdseed from him. The thief quickly retreated atop a post to enjoy his ill-gotten gains undisturbed.

Monkeys aside, those we met in Malaysia were friendly and helpful. The country is a mix of several cultures -- Malays, Chinese and Indians. The legacy of British colonial rule made it easy for us English speakers to get around. To this day, I'm not sure what I'd expected in Malaysia. I only know it exceeded them in color, richness and warmth. Twenty hours in the air was a small price to pay for my memories of Malaysia.