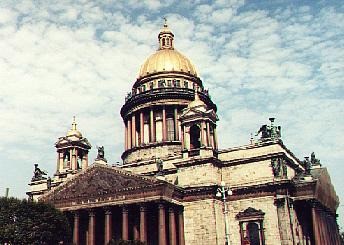 I'm sure for many one of the big selling points of our Baltic cruise was our two-day stop in St. Petersburg, Russia. It also presented Sharon and I with a dilemma -- shell out the money for Holland America's overpriced, guided tours, or pay a premium for a Russian visa. With a visa, we could travel independently. Without it, the only time we'd be allowed off the ship during the two days was when we were taking part in a pre-purchased tour.

I convinced a reluctant Sharon we would be able to get around fine by ourselves. I'd read numerous guidebooks -- all said St. Petersburg was safe. You simply needed to exercise the same caution you do in any large city. At the end of our two days there, Sharon admitted I'd been right. We had a great time and saw many wonderful places.

Our sightseeing got off to a bumpy start, though -- literally! The taxi ride from the ship (once again, Holland America docked "in the boonies," far away from the center of town) was a bouncing, jarring roller coaster across terrible roads rutted with tram lines and construction. We quickly got our bearings, though, and saw the golden dome of St. Isaac's Cathedral gleaming in the morning sun. From there, we walked to the Admiralty -- Russia's historic Naval Headquarters. After that, the wide open spaces of Palace Square beckoned us. On one side of the square was the long, lime green Winter Palace of Catherine the Great. Outside, its white trim shone in the sunlight, but inside it was the bright glitter of gold leaf that lit its spacious rooms.

The Winter Palace housed in The Hermitage, Russia's answer in spades to France's Louvre museum. We'd read that there is so much art that if you could stand in front of each piece for one minute it would take you seven years to finish. Not having seven years, Sharon and I figured we could take maybe a couple hours of shuffling through a museum. We ended up spending more than three hours there. More thrilling (in our opinion) than the Van Goghs and Monets, were the gilt-encrusted, chandelier-lit, positively palatial rooms they were housed in. Catherine the Great's palace was sumptuous, and we didn't want to miss a room of it!

Afterwards, we crossed the Neva River to the arrow-shaped spit of land called The Strelka. There were nice views of the palace and across the river to the Peter and Paul Fortress. Up and down the banks, pastel-colored 18th-19th century palaces and mansions crowded close to the water. In between them, Venice-like canals could be glimpsed, accentuated by arcing foot bridges. We recrossed to Palace Square and began a stroll along the St. Petersburg's main thoroughfare, Nevsky Prospekt. At Sharon's urging, we found a "cute little cafe" -- her preferred lunch stop. While we dined, I watched the Russians walk by. They looked like any other Europeans, I thought, especially their clothes. The current hot color among Russian girls was bright, chartreuse green. 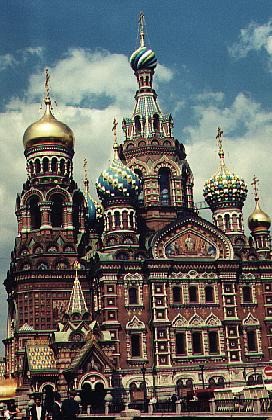 Cathedral of the Saviour of the Spilled Blood

Following lunch, we took a boat cruise up and down the Neva. An especially pretty sight that left us wanting to see more was the Smolny Cathedral. Its golden domes shone in the late afternoon sun, while its white towers and pale blue trim gleamed softly. Back ashore, we explored Peter the Great's Summer Gardens, enjoying the classical statues and the czar's subdued yellow summer palace. We hiked past the incredibly ornate Cathedral of the Savior of the Spilled Blood, easily the most stunning church we'd see on the trip. Its domes were ice cream-like swirls of greens and blues, its outsides covered in mosaics, coats of arms and bright patterns. Every inch was decorated, it seemed. I shook my head in wonder -- it was simply gorgeous. We saved touring its interior for the next day, though. Instead, I let Sharon rest her aching back and weary legs in a cafe -- beer in hand.

The next morning, we were right back at it, though. We peeked inside St. Isaacs's (which had been closed yesterday), then marched off to the Peter and Paul Fortress. When the Russians seized this area in their war with Sweden at the dawn of the 18th Century, this was the first thing built. It is an earth and stone, star-shaped fort guarding the Neva River. Sharon enjoyed touring its later era prisons, used by both the czars and Bolsheviks. Nowadays, the St. Petersburg citizens use it as a sunbathing spot. 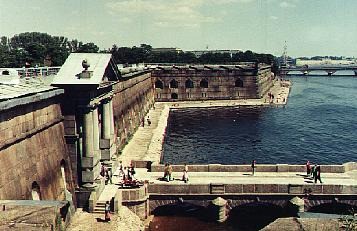 Then it was back to the the cathedral where we finally toured its interior. Colorful mosaics encrusted the walls, pillars and ceilings. It reminded me a bit of St. Mark's Cathedral in Venice -- especially where the sun glowed off the golden mosaic stones. For me, the Cathedral of the Savior of the Spilled Blood was my favorite sight of the entire Baltic cruise. Afterwards, we wandered over to the flea market to shop for souvenirs. I did a fair job of bargaining for Sharon's two lacquered boxes and my own birch wood one.

Then, it was back to the ship, where we watched the Maasdam carefully pick its way out of the crowded harbor. Later that evening, though, the sea served up a strange, otherworldly sight. It was the Summer Solstice -- the longest day of the year -- and the sun didn't set till after 11:30 pm. The Baltic Sea slowly became a rippleless calm. As the sun sank, both the sky and the sea turned a dim, dusty blue. The line of the horizon vanished in the gloom and it was like sailing through a featureless, blue fog. Other ships, lit up with tiny white lights, passed by going the opposite direction. They seemed to float in silently out of a fog, and just as smoothly disappear. It was a ghostly place, one that I know was not on our cruise itinerary, but one I'd never forget: Near the top of the world in a blue gloom, on an evening where night never came.