Walking With the Wildlife in Swaziland 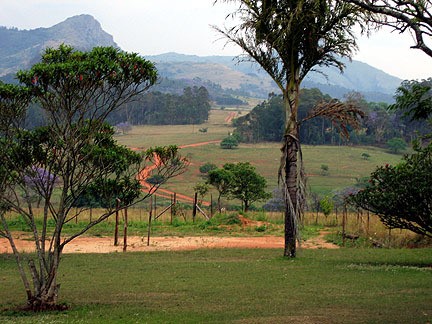 As I rounded a corner on the path, a warthog emerged from its den about five feet away. We both froze, eyeing each other cautiously (me checking out the length of its tusks, in particular). Although nowhere near as dangerous as a hippo, warthogs CAN do some damage if provoked. After snapping a couple photos, I edged slowly off the path -- which the warthog obviously regarded as ITS -- and began to circle past. After I'd gone what it judged far enough, its tail sprang upright and it jogged off down the path, allowing me to return to the trail. 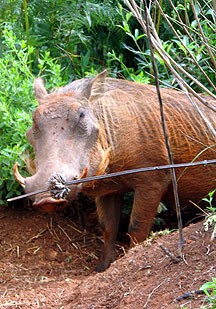 Unlike the Disney version, this warthog did not break out into song but eyed me warily

Close encounters with wildlife like this are what drew me to Swaziland and Mlilwane Wildlife Sanctuary. Because the preserve contains no predators, the animals allow you to approach quite closely. My run in with the warthog was only the first of many amazing, almost "petting zoo" close experiences with some of Africa's signature wildlife -- zebras, hippos, impala and more other types of antelope than I knew existed. You are free to hike throughout the park along its extensive trails. I spent two full days exploring Mlilwane, signing the hiking logbook each morning at the main camp so that the staff could keep track of me. I'd return each afternoon, footsore but happy, to Sondzela Backpackers Lodge -- the friendly and incredibly cheap place I stayed at inside the park.

Although Swaziland itself proved to be quite the bargain, significantly cheaper than South Africa, my method of getting there was one of my splurges in my two weeks in Africa. I bought a ticket on the Baz Bus, which is a hop-on, hop-off shuttle that runs throughout South Africa, but also stops in Swaziland. I purchased the Loop Ticket for $144, which allowed me to travel in a circle from Johannesburg to the Drakensberg Mountains, Durban, Swaziland, north to Nelspruit (near Kruger National Park), and back to Johannesburg. To fully take advantage of this wonderful service, the more time you can spend -- i.,e., the more stops you make along the way -- the more a bargain it becomes. Also, the Baz Bus actually picks you up from the place you're staying at and drops you off at your next Backpackers hotel or hostel on the way. Probably the best fringe benefit of the Baz Bus, though, is the group of "instant friends" you make on each leg of your journey, especially those stopping at the same destination. At each of my stops, the people I met on the Baz Bus proved to be those who I hung out with during my stay at that place. For a solo traveler, that's a great resource.

I'd arrived in Swaziland on the Baz Bus in the early evening, along with two Danes, Casper and Ulla, and a young German, Stefan. We were all staying at Sondzela Backpackers, as every guidebook you read recommends it highly. My first impressions weren't quite stellar -- the staff was late picking us up at the drop off point, the room accommodation seemed disorganized, but the place grows on you. The first positive was the price: My private room was 100 Lilangeni, or less than $15 a night (shared bathroom and toilet, but hey, who doesn't do that at home, too?). Then we ate our first Sondzela dinner (25L, or just over $3) around the campfire -- heaps of good, wholesome food. The staff then shuttled those of us who wanted to watch the free traditional Swazi dancing at the main Mlilwane camp. And the next morning, after a filling breakfast for about $2, things just got better when Stefan and I headed off to explore Mlilwane. 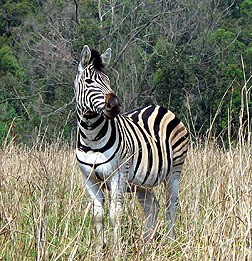 We found the 15-minute trail which leads downhill from Sondzela to the main camp. As we crossed the stream, we came upon a herd of impala resting in the shade. We took the left turn ("Long Way") and saw zebra and kudu before reaching the camp. After signing the log, we met our first warthog, rooting peaceably by the sign announcing the start of the self-guided hiking trail. Before long, we had another close encounter as a hefty, shaggy male Nyala let us approach within arms length as he munched leaves off a bush. Then, we rounded the corner and had our warthog face off. Afterwards, I spotted a lone wildebeest off in the distance. About that time we also saw Casper and Ulla catching up with us on the trail (Stefan and I had been taking our time, enjoying the animal-rich environment). The Danes were headed up to Execution Rock trail, a six hour hike to the highest point in the park. Stefan decided to join them, while I would continue on alone on the shorter Hippo Pool trail.

As the others hiked off, I decided to see how close I could get to the wildebeest. He stood alone on a hill, facing me square on with his demon horns. I noticed the path intersected with a dirt road that ran by the base of his hill, so I exited the trail and moved closer. The wildebeest continued to stare me down as I got closer on the road, and began to emit loud, bull-like snorts. I later read this was how a wildebeest stakes out his territory -- standing on a hill in clear view, snorting. As I reached the edge of the road, his snorting got more intense, it seemed. So, I took a photo, backed away, and returned to the trail. I found out later that my friends had stopped to watch my encounter and got a good chuckle out of it.

Hippos can be dangerous, which added a bit to the thrill of walking through the preserve

The path delved into the woods next, and the animals became scarcer. The path was quite scenic, though, often strewn with the purple petals of the lilac tree. As the trail meandered towards the hippo pond, I slowed down, pausing every so often to listen. I didn't want to blunder onto one unexpectedly, as hippos kill more people every year than any other animal in Africa. So, it was that I heard the hippos before I saw them. The second time I heard a sharp, puffing exhalation of air, I realized what it was: A submerged hippo surfacing and breathing. I crept along the trail which rose along the edge of an embankment, overlooking the pond. Eventually, I saw them. A group of about 4 hippos partially submerged just off a point of land. I raised my camera, zoomed in all the way, framing them, and -- beep, beep! My batteries died! Hurriedly, I switched a set of spares in, but in the meantime, the hippos noticed me and slowly sank until only their eyes and nostrils showed. I took a few shots, and then crept closer to an overlook about 20 yards from them. I stayed there, watching, snapping an occasional picture and enjoying the show. The four hippos actually did very little other than bob to the surface every now and then, flip their ears and keep an eye on me, but it was an amazing experience being so close to them. I kept my vigil for about half an hour, before moving on and returning to Sondzela Backpackers.

Hippos in the Hippo Pool at Milwane After a short nap, I caught a ride with the staff to an internet cafe on the main road to update family and friends. I then decided to hunt down a shop I'd read about called Swazi Candles, which is known throughout the region. I figured their candles would make nice gifts, so I asked directions at the internet cafe and flagged down one of the local minibus taxis. For 2L (about 15 cents), they dropped me about 10 minutes down the road. I looked around, but didn't see the store. Another passenger pointed to a dirt road and said to go down that road. He noticed a group of small children nearby and instructed them to guide me. When we reached the end of the road, it was obviously a residential drive and a dead end. One of the residents saw me, discovered what I was looking for, and ushered me (and my four tag-a-long kids, who obviously had NO idea where Swazi Candles was!) through a low spot in his barbed wire fence. He pointed through his farm fields to the next road. The white tourist and four Swazi children duly trekked through the fields and across the other main road. Yet another person pointed me to yet another dirt road, which I followed and eventually found the world famous, but well hidden, Swazi Candles. It was definitely worthwhile, though, as their products were gorgeous. I later saw them in the South Africa costing almost twice as much as I paid there. 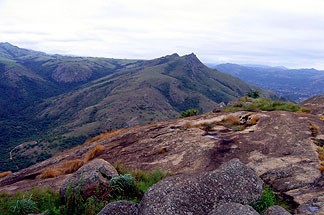 The view from atop Execution Rock

The next morning I planned on doing my friends' six hour hike to Execution Rock. Unlike the baking hot day they'd had, my morning dawned cool and misty. I was up at first light and retracing my steps through Mlilwane. If I'd thought I'd see a lot of wildlife the day before, there was twice as much in the early morning. I saw herds of wildebeest (non-snorting variety), zebra and antelope. When I came to where the I thought the trail to the peak diverged from the Hippo Trail, things started to go wrong. The rudimentary View from atop Exectution Rock in Milwanemap Sondzela provided actually proved to be an impediment. The more I tried to follow it, the more wrong turns I took. I should have simply "followed the bricks." Every couple hundred yards along the Mlilwane trails, the staff has placed a painted brick depicting a footprint, pointing in the direction you're supposed to go.

As it was, my six hour hike turned into a nine hour odyssey through corners of Mlilwane I'd never intended to visit. If I had no luck choosing the right path, I had great luck with wildlife, though. I saw new animals I hadn't the day before, including Bushbuck (who also snort), jackal and a couple varieties of monkeys. The view from atop Execution Rock was superb, despite the gray day (the first of my trip). It was looking only slightly bedraggled that I finally returned to Sondzela, where I was greeted by my friends, who were just returning themselves from a day of shopping in town. Shortly afterwards, the newest crop from the Baz Bus arrived, and it included some of Casper and company's friends from previous Baz Bus legs. The evening only got merrier, at that point. Since a good number of us were leaving in the morning, we had a going away party that night. Which brings me to another way that Sondzela "grows" on you: Beer prices. Their fairly well stocked bar charges just a bit over one dollar for a beer (or Savannah Dry Cider, which Casper and I were drinking). We had great fun that evening, and everyone exchanged e-mail addresses and promised to update the others on our travels. 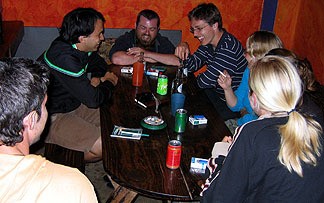 Meeting like-minded travelers on the road, and sharing a drink with them, is one of the highlights of traveling

After a hearty breakfast the next morning, I boarded the shuttle to the main road, then hopped on the Baz Bus with my new friends, and headed out of Swaziland. I took with me memories of many close encounters with Mlilwane's wildlife, and new friendships made with my fellow travelers.