Netherlands Should be Known for Scenery - not "Red Lights"

Canals, waterways, and plenty of history make for a great substitute destination 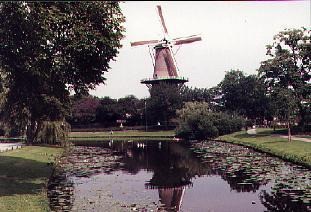 Finland? Nope, no "midnight sun" for me this trip. The flights were full, and I was left stateside when the plane took off to plan what I would do instead. I saw that I could get to the Netherlands, and never having been there, decided that would be my new destination.

Continental Airlines upgraded me to business class for the trip over, so I didn't even mind the three hours sitting on the ground in Newark after we left the gate. I was mildly concerned I would miss my connection in Birmingham, England, to Amsterdam. However, that didn't happen, and Thursday afternoon I stepped out of the train station into the rain of downtown Amsterdam.

I splashed off towards a couple hotels my guidebook had recommended. Both were full, as were several others. So, I went back to the Tourist Information Office and booked a room through them. Hotels in Amsterdam are expensive, I found. After unpacking, I dozed off for a few hours. Slightly refreshed, and the rain having slowed to a drizzle, I went out to explore the city.

Amsterdam is a very beautiful city. The old town area where I stayed is ringed and cross-sectioned by a network of canals. This makes every other street a "riverwalk" of sorts. The curving waterways, their arching stone bridges, the three storey Renaissance-era buildings with their fancy facades and roof gables leaning over them, all make Amsterdam a scenic city.

Like all tourists, I had to walk through the "red light" district to see the prostitutes in their windows. I felt slightly embarrassed to be there, but I'm sure most of the others around me were sightseers like me -- not actually window shopping. The women are a mix of attractive and worn-looking, and they were wearing various types of lingerie. Interesting, but a bit unfair that such a scenic city is more known for this instead.

Friday morning I took the train to Arnhem, site of the famous WWII "Bridge Too Far" from Operation Market Garden. First, I went to the nearby Open Air Museum, which has rural buildings that have been brought there from all over Holland. The farmhouses, windmills, barns, drawbridges, mills, etc., are all from the last three centuries and are arranged among the rolling hills and woods into little villages. It was very interesting, and a nice way to see traditional, rural Holland in a short amount of time. After several hours there, I went to the Airborne Museum with its displays, exhibits, etc., from the famous battle. There were tons of photographs because a British combat photography team had made the parachute drop behind the German lines with the rest of the troops. I'm a big military history buff, so this was fun. Plus the sun came out and it turned out to be a great day. Of course, I had to walk out onto the actual Bridge. It, uh, wasn't too far... 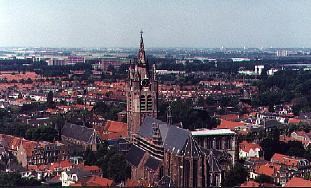 The next day it was off to the scenic Dutch towns of Delft and Leiden. With canals, boats and lively street scenes, these were both picturesque. My second day of magnificent sunshine didn't hurt either. In Delft, I climbed the circular stone stairway of the Neiue Kerk (new church) tower. It was dusty, musty, and full of pigeon feathers. It was also very high -- which is why a good number of the tourists give up. Being the bold international traveler that I am, I persevered, and was rewarded with some incredible views.

That night I joined the throngs of Dutch soccer fans in Rembrandtplein (the square where my hotel was) to watch the world cup game against South Korea. It was fun, and reminded me a lot of our college football type crowds. The Dutch won, which brought plenty of spilled beer to the bars.

The next day I took the bus to the fortified town of Naarden. It is completely ringed by two moats and elaborate earthworks in the form of six-pointed star. The brick-faced bastions are in good shape, and the floating islands of the "ravelins" in between each star point are also easily seen. The town itself is also really cool, with lots of Renaissance era buildings, cobblestone or brick streets, and plenty of Old World atmosphere. The weather in Holland continued to shine on me, so that only added to the enjoyment. 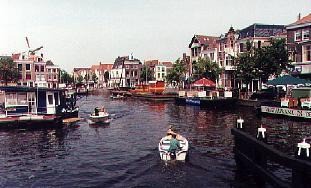 The next morning I left Amsterdam. My flight was delayed, so I ended up missing my connection home in Birmingham. I'd figured this was a possibility, so shrugged it off and went to look for a B&B. After much knocking on doors in Marston Green (a suburb of Birmingham), I finally found one. Then I took the train to Coventry for some sightseeing (really cool Cathedrals and medieval buildings). Returning to the B&B, I ended up watching England's World Cup Soccer game with the owner and his dog. We downed quite a few beers and had a good time. It was a good finish to my trip.

Business Class awaited me again on the flight home, which was good, and a huge air traffic control delay leaving Newark for Columbus, which wasn't good. I didn't get home till nearly 11 pm. My girlfriend Sharon was there to greet me, which was a nice surprise. Kind of like Holland itself was!