Visit to Waterloo Battlefield in Shortest of Belgium Trips 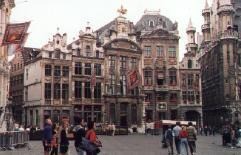 My trip to Belgium in the summer of 1996 illustrates why I love the travel opportunities of my job so much. A coworker offered me their Sabena Airlines passes that were due to expire in a couple months. I accepted them, knowing immediately where in Belgium I was headed: Waterloo. As the pictures on this web site of castles and historic ruins may have hinted, I am a huge military history buff. I've read many accounts of Napoleon's defeat there, and jumped at the opportunity to go. The Sabena flights were open enough, so a few weeks later, I stepped off the plane in Brussels.

The striking Renaissance architecture in the downtown square was a nice bonus, along with the historic churches and palaces. The following morning I took the bus to the battlefield, bought a walking guide, and marched off in the footprints of the soldiers of Napoleon and Wellington.

In 1815, British General Wellington defended a ridge against Napoleon's Grande Armee of France long enough for help from the Prussians to arrive and turn the battle in their favor. I expected to see an imposing hill -- a breakwater that dashed Napoleon's last hope. My eyes were opened, instead, to the subtle ridges that Wellington used so ably to win his battles. The hill was almost imperceptible. As I walked from the British position down, across the ground the French advanced, only then could I notice the rise the British commanded. The skill these generals had to notice such slight slopes! 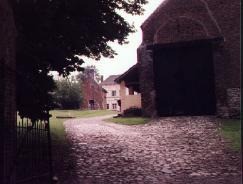 As I veered to the farmhouse of Hougomont, defended by the British Guards and Hanoverians, I got another thrill. The loopholes knocked in the walls were still visible. I saw bricks with missing chunks that had to be caused by musket balls. Wow! More than 180 years later, and history stood inches from my hands. Touring the rest of the battlefield, my walking guide brought the battle out of the books into my eyes as a physical reality. It was smaller than I'd envisioned, and the buildings that survive to this day are plain. Nevertheless, the drums of that far off day beat upon my soul and I will remember Waterloo, and Belgium, well.