Walks in Wales are beautiful, with castles & abbeys galore

Week's weather is rainy in England, but sunny in Wales 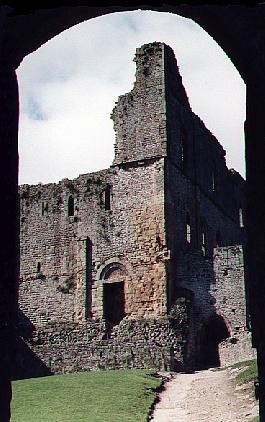 (Travelogue begins in and ends in England)

Two things worried me as I shouldered my red and black-backpack again, and headed off to London. How hectic would things be in the city? How crowded, with Princess Diana's funeral scheduled for the day after we arrived? The other was a worry that meeting up with my brother Brian (who was to arrive 12 hours later and at a different airport) might run into difficulties.

London did not seem to be in too much of a boil, I quickly noticed. It was touching to see all the people getting on the "tube" clutching their bouquet of flowers to take to Westminster Abbey. The tabloid-like English newspapers seemed sincere -- the nation truly mourned their "people's princess."

After Brian finally arrived several hours late, we set off to the Tower of London. The Beefeater tour guide seemed a tad bloodthirsty, relishing the tales of various beheadings that took place in the vicinity of the tower. But then again, red meat was his namesake and business, so we shouldn't have been surprised.

The Crown Jewels looked like, well, a crown and some jewels. I guess diamonds and the like don't make my eyes glitter. The Tower Bridge was next, then Soho, dinner, and getting tickets for our morning train to York. Shortly after, Brian's transportation jinx kicked in, again. We were headed to a Pub Walk when every subway train going our direction decided to break down. We were delayed, missed the walk, so decided to amble on our own towards a pub. The 11 o'clock last call caught us by surprise, so we called it a night.

The city was nearly deserted as we boarded our train to York the next morning -- they were all down at the funeral. We'd talked about going. It would be a historic event to have attended, after all. However, we figured it would be best to avoid the crowds. My jinx at weather was getting warmed up as the occasional rain that had greeted us yesterday settled in for the day up north. Our walk around the medieval walls of York was neat, though. The fortified gates, the views of York Minster Cathedral and the other scattered ruins were much more to my liking than any queenly baubles.

The next day we were off to Wales, writing off the day and its six hours of trains to "travel." We did get a peek at Cardiff Castle and we enjoyed a pint or two of the local brewery's "Brains" brand ales. I resisted the temptation to e-mail everyone from a cyber cafe, and Brian resisted the pull of the Cardiff casino. The morning soon chased any lingering clouds away -- as it turned out -- for good for the next three days. Our first hike began at awesome Chepstow castle. I had not expected much from it, but the remarkably complete walls and towers loomed over the river Wye (which we'd be hiking along) very satisfyingly.

Our Wye River Valley Trail hike turned out to be a complete misnomer. It would have been better called, "Woods along the River Wye Hike" as the trees blocked our view of river valley for nearly the entire trip. Basically, it was a four hour march through the woods with glimpses of the Wye river curling along the valley floor beneath us. The hike ended at the picturesque Tintern Abbey, which was set in a wooded hollow in the hills. The ruined abbey walls and pillars were imposing, especially considering how remote they were from any towns. It was fun to wander among the ruins, imagining this huge abbey as it was in the middle ages, "lost in the woods" as it were.

Despite what some may call my reasonable experience as a traveler and trip planner, Wales proved that sometimes I'm not very bright. We spent five days there -- three of which were to be hiking. Wouldn't it seem reasonable to space these out to give your feet a chance to recover each evening? Nope. The walking fools set off early the next morning to the Gower Peninsula coastal path. At first, the path was easy to follow, as it meandered from the shoreline up into the hills overlooking the steeper cliffs. Then the true or false test became multiple choice. There seemed to be at least two trails to follow most of the time. 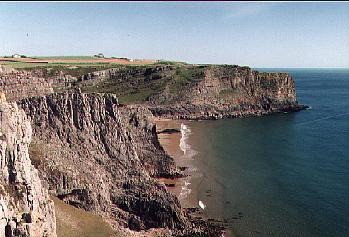 Bold, travel-wise Mike led the way...into adventure! I am sure as Brian clambered along a narrow ledge, eying the hundred foot drop to the rocks below, he was praising my skills as a pathfinder. His Reeboks were beyond a doubt the perfect foot apparel for the crumbly dirt and rock of the path. Personally, I never felt in danger, but I was a little worried about him. We quickly switched to the paths that took to the High Road after that.

The scenery was magnificent. The cliffs stood sometimes 500 feet above the sea, their brown sides and bright green tops undulated along the coast. The rocky soil, sheep and deep blue sea all around made us feel like we were wandering through a U2 video.

We were headed for more of the same the next day as we did the train and bus journey to the westernmost part of Wales, the St. David's peninsula. The coast walk there proved every bit as beautiful, with the waters being deeper blue and graced by the oily brown forms of seals swimming among the rocks. St. David's Cathedral was a multistory surprise in the tiny town, and the ruins of the "Bishop's Palace" were a joy to wander among. You could almost see the medieval monks wandering among the rooms and feasting in the spacious halls. 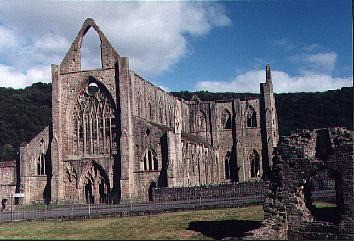 The next day we were to bid goodbye to Wales and the clouds gathered expectantly. They held off as we stopped off to visit Caerphilly castle near Cardiff. The elaborate set of water defenses and towers proved it to be one of the most unique and thrilling castles to visit. Everywhere, placid brown waters surrounded the deep gray stone of the castle. Two fortified bridges leading to the castle "island" had been reconstructed, but the rest of the defenses were in good shape.

As we crossed the borders into England, the rain quickly began to fall. The weather tally would proved to be 5 sunny days in Wales, three out of four rainy in England. For Britain, though, I count that a victory. We unpacked our things in Salisbury next. The next morning we were taken on the most winding, circuitous, going-the-longest-possible-way public buses to Stonehenge and Avebury. For example, at the end of the afternoon, we left Avebury for Salisbury, less than 20 miles away. It took an hour and 45 minutes.

It was cheap, though, and Brian and I palled around with a young Canadian girl who was doing her best to give her mother a complete head of gray hairs. She was taking three months off after high school to travel, somewhat aimlessly, throughout Europe (mostly the British Isles, though). Alone. It reminded me very much of what I did when I graduated. Anyway, she was a history buff, so we talked Bronze Age stuff while Brian looked on a bit mystified. She was headed to Cornwall next, so I gave her a report on what I'd done there a few years ago. Kids. Ya gotta love their spunk!

To atone for my sin of filling her head with more grandiose travel schemes, I dragged Brian to Salisbury Cathedral when we got back. We sat in on a service listening to the beautiful voices of the choir float among the soaring stone arches of the building. Another night in a pub washed away in good the experience had done.

Finally, it was back to London. A mob scene of tourists at Westminster Abbey was a disappointment. However, the sight of Big Ben minus the scaffolding I'd seen it in years ago was a surprise. Its polished golden sides complimented the bright blue skies it stretched towards. We ambled past the impressive Halls of Parliament, then went to Buckingham Palace. Heaped against the gates was another heart-tugging tribute to Princess Diana. Flowers, more flowers, teddy bears, photos, poems, notes, paintings, balloons all clutched at your throat as you scanned the mounds of them.

We ended our trip with one of the London Walks we'd tried to make it to the week before. The "Jack the Ripper" walk was not the tacky, sensational thing I feared -- but an informative, interesting walk among the buildings, pubs and alleys he stalked. I was pleased with our guide -- a friendly English woman genuinely interested in teaching us about the era, not some overly dramatic fop in a cape.