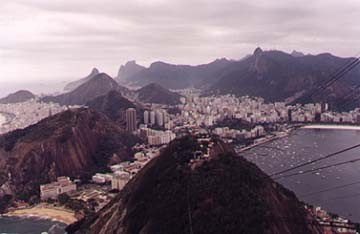 View of Rio de Janeiro from atop Sugarloaf in the bay

If you had told me I'd have only three hours of sunshine in my three days in Rio de Janeiro, I'd have wished for them atop the mountain with the statue of Christ overlooking the city. Alas, it was clouds on Corcovado. My next choice would have been at Pao d'Acucar, or Sugarloaf, the steep hill with scenic viewpoint rising out of Rio's harbor. But no, the skies were not sweet above Sugarloaf.

However, when my three hours of southern hemisphere sunshine did finally arrive, I had to admit, it came at the best possible time.

Thanks to a business class upgrade from Continental on my nine hour flight to Brazil, I was refreshed and ready for Rio when my plane landed. I'd made my hotel and airport transfer arrangements online with Cybercity.com, and Cristina Cotrin was waiting and quickly whisked me to the Oceano Copacabana Hotel.

The weather was cool and the skies gray when I ventured outside a short time later to begin my exploration. I zipped from Copacabana to Central Rio on the metro and found the Nova Cathedral. This odd, conical building looks like a cross between a Mayan pyramid and a massive concrete teepee. Inside, it was spacious and airy, though, with four gorgeous stained glass panels stretching nearly from ceiling to floor. 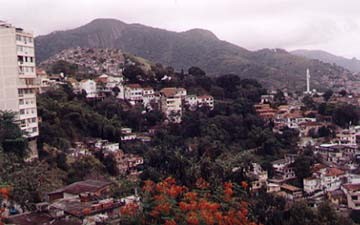 I then hopped aboard one of Rio's antique trams, which rattled and bounced me high into the hills overlooking the city. I stepped off in the none-too-wealthy barrio of Saint Teresa, with its almost Mediterranean-looking houses. Clinging to the rich, green hillsides, many of the homes are built on stilts. Most have million dollar views of the bays and buildings of Rio laid out beneath them. My guidebook had warned me repeatedly of Rio's crime rate and the need to be careful where you wander. However, I never felt threatened or worried, even though those I was around were definitely closer to poverty than wealth.

That night for dinner I took one of Cristina's recommendations and ate at a grill where you are charged by the weight of the food you heap on your plate. I selected grilled steak, chicken, potatoes, salad and bread from the cafeteria style layout. The steak was a tad gristly, but everything else was great. Oddly, I was reminded of Las Vegas' buffets. The price was cheaper, though, coming out to less than $5 (including my beer). 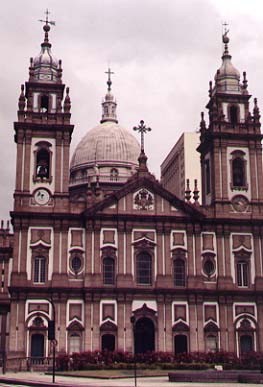 The next morning I awoke to more gray skies. Since I was saving Corcovado for sunshine, I took the metro downtown again to sightsee. The church Igreja de Nossa Senhora da Gloria de Outeiro, on its hill overlooking the harbor, was my first stop. Next would be the grand, domed Igreja de Nossa Senhora da Candelariea. The most interesting of the churches was the Mosteiro de Sao Bento. When I arrived, a huge crowd was exiting (likely there for the Gregorian chant service). I slipped past it into the dimly lit interior. The interior was lovely. Carved wood decorated every inch of the walls and pillars, coated with gold paint that gleamed with a warm dusky glow. I listened to one of the monks explain various aspects of the church as I wandered the dark, rich interior.

When I stepped outside, it looked like my prayers were being answered, as the clouds overhead seemed to be breaking up. I took the metro back to Copacabana, then a cab up to Corcovado. The patches of blue were gone by the time I got there, though, and the mountain was shrouded in clouds. The city below, and at times even the statue of Christ, were hidden in a thick, cottony fog. I settled in to wait. Eventually, the fog began to lighten. Suddenly, it was like looking out a window through gauzy sheers -- I could see the shape of Sugarloaf and the faint line of the bay. Then, as if the flimsy curtains were yanked aside, Rio de Janeiro was laid out beneath me in all its glory. 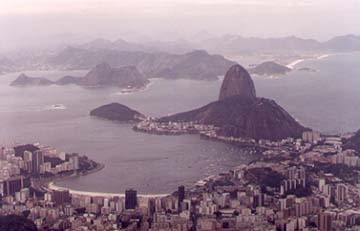 View of Rio from Corcovado

I'm sure on a stunning, clear blue day, the view is more striking. However, the panorama from atop Corcovado was spectacular even when painted in shades of gray rather than blue. Down in the bay, Sugarloaf's hump rose dramatically, dwarfing the high rise office buildings and apartment towers. The shoreline snaked backwards and forwards, exposing the gleam of the cream-colored beaches Flamengo, Copacabana, Ipanema, and others. I stood there for more than hour as the view came and went with the clouds rushing up the slopes of the hill. I decided to take the long way home, though, riding the cogwheel train down the hill and a local bus back to Copacabana.

Later that night, there was an art show and flea market along beachfront Atlantic Avenue. I browsed for quite some time, picking up a set of agate drink coasters for myself, and a gift for Sharon, as well. I was tempted by some of the art, but held off, as I have more souvenirs and enlargements of photos from my trips than I do wall space. 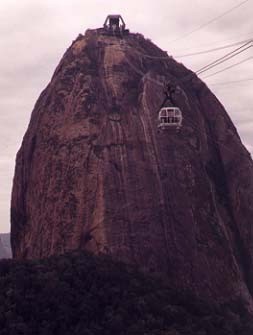 My final morning in Rio dawned -- you guessed it -- gray and cloudy. I was first in line for the cable car to Sugarloaf when it opened at 8 am. I expected Sugarloaf's less lofty height meant it would be less stunning than Corcovado, despite the fact my guidebook said everyone should visit Sugarloaf. Lonely Planet was right, I was wrong. The view from atop Sugarloaf is amazing. You get a much better feel for the mountainous terrain that Rio is built around from up there. It's easy to see the peaks jutting up around and in the middle of the city, dividing Central Rio from Copacabana, or northern Rio from downtown. Over all, the Christ statue juts skyward, seeming to top the cityscape off perfectly, like a flag atop a pole or an angel perched on a Christmas tree.

I was deeply moved by the panorama of nature and city. Rio has been lauded as having the most spectacular natural setting for a city. Atop Pao d'Acucar, I came to agree with the judgment and spent long moments gazing out at the mixture of sea, mountains and city that seemed to go on forever. The early morning gray seemed to give it a primal quality -- like it had just been created out of volcanic fire or a wizard's smoke. A deep sigh of thanks rose from me as I knew I'd been given another gift; another opportunity to see a special place of beauty in the world.

So, when did the sun finally arrive? Well, Sunday in Rio means that one side of Atlantic Avenue alongside Copacabana Beach is closed to traffic and instead overwhelmed by walkers, joggers, bicyclists, skaters and dogs. I jogged the length of the beach and more, and it was at that moment, the sun began to peek out. The heat rose steadily and I was given my first glimpse of the beach culture that citizens of Rio seem to embrace fervently. After showering and packing, I returned and staked out a seat to watch the parade of beachgoers pass by. I spent my last three hours in Rio bathed in sunshine, reading a book and sipping cold beers.

Had the sun not come out, I would have missed this vital glimpse of Copacabana and Rio de Janeiro. And despite the clouds, I'd still enjoyed the views of Corcovado and Sugarloaf. So, sometimes it's better to let nature make the choices, especially in stunning Rio de Janeiro.