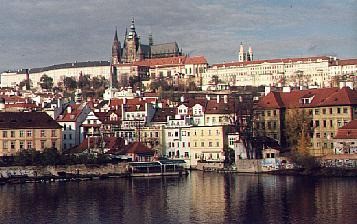 Having heard and read rave reviews of Prague, I'd been saving a visit to the city in my back pocket, so to speak. So, when our trip to Cyprus fell apart, I whipped out plans to visit the Czech Republic instead. My travel companion, Delta employee Tim Price, agreed to the last-minute change. So, we flew our separate ways to Prague, meeting at the Opera Hotel.

I'd arrived a couple hours earlier, so did some preliminary scouting in the Old Town as dusk was falling. One thing I'd spotted was the nearby Imperial Cafe -- a gorgeous, atmospheric gathering spot decorated in ceramic tiles. Tim and I thought a good way to begin our Prague experience would be with a couple of Czech beers. I'd read beer was cheap and tasty here, but my jaw dropped when I saw the price. Twenty-five coronas for a pint of Gambrinus -- or about 60 cents!

We chuckled as we unwound from our flights, imagining what various friends would do in a place where beers cost less than a dollar each. However, nothing on the dinner menu jumped out at us. Instead, we promised ourselves authentic Czech cuisine tomorrow. Tonight would be expediency.

Tim was a good sport and indulged my international dining tradition. Friends of mine know what that means, for in my wandering, I had spotted -- you guessed it -- a Pizza Hut! As a connoisseur, I would rate Prague's Pizza Hut fairly standard. There were no strange local twists on pizza (like the Brits with their corn). However, you can't go wrong when good pizza and a pitcher of beer costs only a couple dollars. Afterwards, we were fairly tired, and returned to the hotel to rest from our traveling.

The next morning we began our exploration. As we walked, the clouds slowly disappeared and the sky brightened into a beautiful, crisp Autumn day. Others have said it, but Prague is simply gorgeous. It seems every building you pass is garnished with carvings, statues, mosaics or decorative architectural flourishes. One of our first stops, Old Town Square, shone in the morning sun. The palaces and fine Renaissance-era buildings around the square glowed pink, bright yellow or pastel blue or green. Even the blackened, multi-spired towers of the Tyn Church, which dominates the square, glinted with gold decoration. Gold crosses also gleamed from atop the greenish domes of St. Nicholas Church. 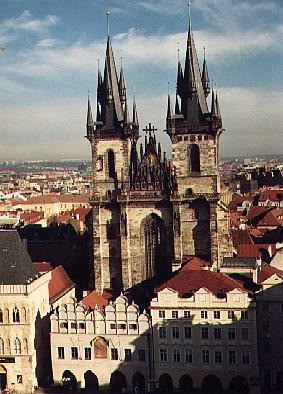 From there, we wandered along cobbled streets towards the magnificent, must-see Charles Bridge. Stout Medieval towers guard each end of the pedestrian-only bridge. Every dozen yards or so, statues of saints, heroes and nobility from Bohemia's rich history look down upon the throngs of passers-by. Some of the stone figures are clean and bright -- adorned with gold halos, others were sooty and dark, seeming to glower from their perch above the Vlatava River. Artists, musicians and souvenir stands lined the way as well, each adding to the local color.

Stealing the show, though, was the view across the river to Prague Castle. The golden-toned buildings beneath the castle were reflected on the river's surface, while high above, the towers and spires of St. Vitus Cathedral inside the walls were outlined against the blue sky and cottony clouds.

Crossing the bridge, Tim and I slowly worked our way past some of Prague's interesting sights. We marveled at the interior of yet another St. Nicholas Church, then climbed a twisting street up to the Strahov Monastery. From its hilltop grounds, we admired the brownish view of a late-Autumn Prague. We also stopped by the Loretta Church, then made it just in time to the castle for the noontime changing of the guard. 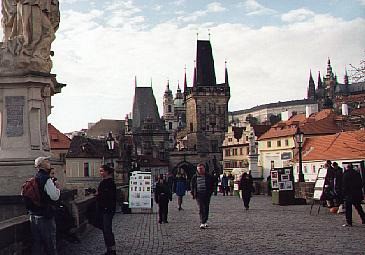 Prague's castle is a sprawling complex of palaces, towers and churches -- the gem of which is St. Vitus Cathedral. Its Gothic towers soar skyward and are encrusted with carvings and statues, bringing to mind English-style churches like Westminster Abbey. We drank in the Medieval feel of the cathedral and the nearby Old Palace. The views from the balconies towards the heart of town were kingly, with greenish domes, church spires and the sea of orange roof tops separated by the various bridges spanning the river.

Afterwards, we wound along the path downhill, turning to walk along the river and checking out souvenirs in various stores. Recrossing the Charles Bridge, we worked our way towards the shopping mecca and gathering place of Wencelas Square. More of a boulevard lined with hotels, shops and restaurants than a square, Wencelas thronged with people. As the sun, seemed to be sinking quickly, Tim and I found a cafe for more cheap Czech beer. After a few that seemed to go too quickly, we returned to the Opera Hotel and freshened up. I pored through my guidebooks for a restaurant, settling upon "Restaurace MD Rettigove," not far from our hotel. It was a good recommendation -- both Tim and I enjoyed our dinners.

The next day dawned a little cooler, but was even more sunny. Before leaving the U.S., I'd checked an internet weather forecast for Prague which had predicted rain showers for the whole time. It proved blessedly wrong. We began our final day of sightseeing in the Jewish Quarter, tracing our way through the numerous synagogues and the impressive walled, Jewish Cemetery. Centuries of tombstones were all but stacked upon each other in this crowded burial ground. My guidebook said the graves themselves ARE stacked up, as in times past, new layers of earth were added to allow for more burials. The walk through the cemetery was solemn and slightly spooky, threading among old trees bent over rows of even older tombstones. It was a much brighter atmosphere inside the gorgeous Moorish-style Spanish Synagogue. The intricate, colorful patterns and decorative swirls on every surface of the interior brought a mosque more to mind than a synagogue.

From the Jewish Quarter, we made our way back to the Old Town Square to watch the late-Medieval era Astronomical Clock strike the hour. Its parade of animated statues of saints and sinners is a popular attraction, and crowds gather beneath it each hour to watch its show. We also climbed to the top of the tower and enjoyed its exhilarating view of Prague. The bright sun picked out the artful details of the churches and buildings. We lingered awhile, high above the city, savoring the man-made beauty all around us. 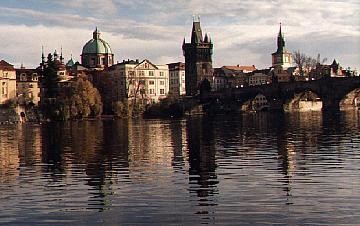 The rest of the afternoon was fairly low-key -- wandering back across the river, stopping for beers in a cafe and browsing the multitude of shops. Tim finally decided upon a glass vase, veined in violet color, for his girlfriend. I bought Sharon garnet earrings that sparkled with red fire. From my reading about Prague beforehand, and our two days of exploration, I decided it was more of a "wandering" kind of town. Its atmosphere was its high point -- not a check-off list of sights to see methodically. To think of it in terms of Italy, Prague is more Venice than Rome.

Since our flights home left very early the next morning, we resisted the temptation to linger too long in a bar that evening. Czech beer is excellent and the price hard to resist. Similarly, Prague is an easily accessible city for the visitor, but with an excellent savory taste that lingers in one's memories.