Mountains and Spring-like weather make for a pleasant stay 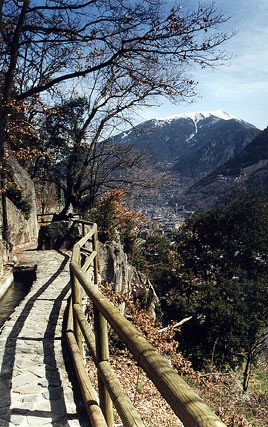 I'd figured Andorra -- tucked between Spain and France up in the Pyrennees -- would be freezing in mid-March. I knew it was still ski season, so it had to be snowy, right? Thank goodness I'd checked the weather online before leaving. I was able to leave the thermal underwear and winter coat at home and enjoy the sun and warmth without them.

Since I'm not a snow skier, I was out to sample the mountain scenery. I flew into Barcelona and took a Novatel shuttle bus up the winding roads into the Pyrenees. The scenery as it whipped by the windows (and I mean really whipped -- Andorrans drive like they're one car length ahead of a landslide) was great. And it just got better as we climbed. Medieval churches, towers and castles presided over an undulating landscape. It made me wish I could take a week lingering at the hilltop villages on my way up here, instead of a couple hours. Their brickwork gleaming in the westering sun cried out for a camera or sketchbook.

Before I knew it, we were stuck in Andorra's legendary traffic jam. A "duty free" country, it is packed with day trippers, shoppers and bargain hunters -- along with busloads of bright cheeked skiers. Luckily, my shuttle drove right by the Pyrenees Hotel where I was staying, so I was able to easily retrace my way through town to it. It was a pleasant hotel, clean, bright and comfortable. The next morning I would discover its paper thin walls, but hey! For a three-star hotel, it was more than sufficient at 35 euros, including breakfast.

For dinner, I followed the advice of my Lonely Planet guidebook to a restaurant and had a decent salad and pasta meal. I wandered the quiet city streets a bit afterwards, and stopped by an internet cafe. It was getting late on Tuesday evening, though, and I hadn't been to bed since Sunday night. So, I turned in early. I really only had one full day for my Andorran sightseeing, and wanted to make the most of tomorrow. 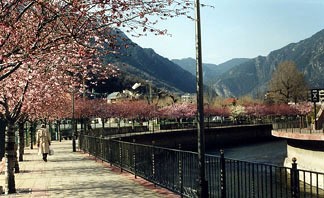 After breakfast at the hotel, I headed down to the Old Quarter of Andorra La Vella, the capital city. Casa de la Vall, the 16th century combination Parliament, Justice and Town Hall is the city's main sight. I was the first to arrive, but since you can see it only by appointment on a (free) guided tour, they couldn't squeeze me in till 11 am. So, I tramped off to the municipal tourist office to get information on hiking in the hills. They were helpful, and with a better map in hand, decided to wander La Vella a bit. The weather was warm and Springlike. I found a shady river walk lined with cherry blossom trees in bloom. It was a pleasant stroll, looking up at the town rising up the steel slopes on either side of the valley, and above that, the pine trees where the buildings gave out, and finally, the snow-capped peaks where the pines faltered. There were many others out taking their leisure on that warm morning, as well. Andorrans seem to love to walk their dogs, but they don't apparently enjoy bringing along a baggie or scooper! 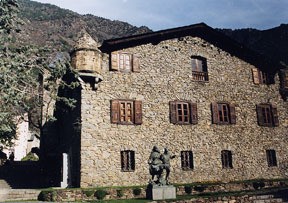 It was time for my tour, so I headed back to the Old Quarter. Casa de la Vall is small as European Parliaments or Town Halls go, but then again, Andorra is pretty tiny itself. There are only about 30,000 actual citizens -- the rest of the nearly a million people must live there for 25 years before they can become one. My guide, a pleasant young Catalan woman, told me many other interesting tidbits about Andorra during the half hour tour. The building still functions as the country's seat of government, and I was shown the small room with its various size chairs where the ministers, cabinet and council meet. Had they been in session, I wouldn't have been allowed in. The citizens are, though, and there are four benches in a mini gallery for them to observe (or they could tune in on radio, as all meetings are broadcast live). Andorra is a "Co-Principality," which means there are two (figure) heads of state: The Bishop of Le Seu and the reigning President of France. So, church and state share leadership. My guidebook explained that was part of the reason this "postage stamp kingdom" has survived to the present day without being absorbed, but it still seemed a little unclear to me.

After my tour, I followed the tourist office's map up through the streets into the hills overlooking La Vella. There is a cobblestone path called the Passeig Rec de la Sol (I think...) that runs for kilometers above the the sprawling valley settlement. It is fairly level, so the walking isn't strenuous, and has a wooden guard rail and is spaced generously with wooden benches. Having just come from Winter in flat, cold Ohio, it was a treat for my senses it sit and let the sun warm my skin while taking in the gorgeous view. Bilbo's line from The Lord of the Rings kept popping into my head: "I want to see mountains again, Gandalf. MOUNTAINS." And here I was, hiking in the Pyrenees in shirt sleeve weather. I said "Hola" to the retired folks taking their daily constitutional, befriended a dog who seemed to want some company, and even used my camera's timer to pose a shot of me overlooking the valley. 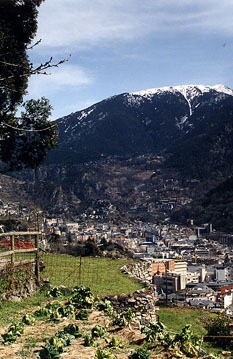 I walked for more than three hours, then returned to town for a late lunch. I'd spotted a Pizza Hut in my earlier wanderings, so couldn't resist adding another country to my Pizza Hut total! Then I took a bus to the nearby village of La Massana (hmm, come to think of it, EVERYTHING is nearby in Andorra!). I hiked around town, climbing streets for good lookout points for more pictures. After more than an hour of that, my feet were beginning to protest. So, I trudged back to the La Massana's main drag and waited for the bus back.

After a short rest in my hotel room, I decided to pick out a restaurant for dinner. Catalan cuisine is supposed to be different than the rest of Spain -- more hearty and meaty. I picked out an authentic sounding one, and armed myself with the guidebook's section on food, ready to interpret the menu. One problem, though. There wasn't a menu! The staff was kind and patient, and helped interpret words for me, since my Spanish is nearly nonexistent. The onion soup was a bit odd tasting, and the steak was fatty and rare (I prefer it more well done). The high point was the plate of olives they set out as an appetizer. I've never been a fan of olives, but I found a type I really liked. All in all, though, it was the least enjoyable meal I had in Andorra. I've proved to myself many times in many countries before that I am NOT a gourmet. I guess I must subconciously feel, that to be a "serious cultural traveler," I must try the local food. Ah, well, every once in awhile, I DO find something that strikes a spark, like I did with Thai food.

I ended the evening in the internet cafe again, catching up on e-mail and letting my buddies from Travelpunk.com know how things were going. I'd had a full day, though, and was tiring quickly. I was footsore, but felt sated. And even if I hadn't gorged myself on Andorra's food, I'd had a full taste of its sights. The next morning, I mailed my postcards, found the bus back to Barcelona, and enjoyed the mountain scenery once again on the ride down through the Pyrenees. Still no snow or cold, just warm sunshine to match the warm feeling inside.