One Week Not Enough to See Greece's Highlights

Skipping some big sights to go off the beaten path 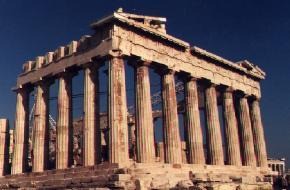 The birthplace of Western Civilization was an appropriate place to begin a new tradition in the spring of 1996 -- an annual trip overseas with my brother, Brian. We had pored over guidebooks for months, wondering how to pare Greece's wealth of sites down to one week. Impossible, of course. We came up with an itinerary, though, that hit some highlights, some sidelights, and even a detour off the beaten path. we began with the highlights, in Athens.

Despite its cranes and scaffolding, the Parthenon -- high above the city -- was striking. Its cream-colored columns stood out sharply against the deep blue sky. Looking around, the view of congested, modern Athens clustered all around the Ancient outcrop made you realize just how long ago Greece's age of glory was. The Agora and its temples, the Archeological museum and its statues, complete the feeling that you were walking through the pages of a history book.

The next day, we took a bus to Cape Sounion and its temple of Poseidon overlooking the sea. Rising on a hill, its white columns pointed skyward like fingers praying to the gods. We saw the beauty of the Greek coast, where rich orange, green and brown hillsides were sandwiched between the dark blue of the water and the lighter azure of the sky. A gorgeous day trip, and a fitting prelude to that evenings ferry to Crete. 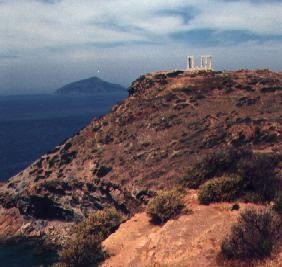 We spent only enough time in the port of Iraklion, Crete, to visit the must-see ruins of Knossos. Then, we escaped westwards along the coast to quieter, pretty Chania. Its pastel-colored waterfront showed this heritage proudly, and it was easy to see why tourists loved its quiet harbor. Three nights there let us relax and enjoy the rhythm of Crete. One of the days was not so relaxing, though. We hiked the inland Samarra Gorge. The rugged Cretan hillsides, laced with olive trees and shallow streams, gave way from time to time to tiny, rocky villages. Bright pink flowers relieved the harshness of the stone houses set amidst the arid climate. The next day, I relieved my sore feet in the Mediterranean, declaring at least one day in Greece must be spent at the beach. Brian disagreed, and explored a nearby town's Renaissance-era fort.

As we sailed back to Athens, we sadly made the decision to further pare our itinerary. Gone were the ruins of the Oracle at Delphi. Our last stop would be off Greece's main tourist trail, northwards instead, to the monasteries of Meteora. A day later, as our morning bus climbed the hills, and I first saw the massive rock outcroppings towering over the plain, I swallowed a lump in my throat. It was one of those moments you knew would stay with you the rest of your days. 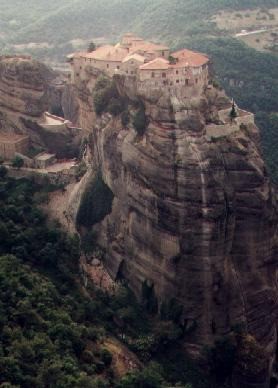 The monasteries and nunneries, with their sand-colored walls and orange terra cotta roofs, hundreds of feet above the valley, were simply breathtaking. The long rock cliffsides were streaked with broad, dark stains, like mascara on the face of a mourner. These stripes -- mineral and water and runoff -- enhanced the feeling of height. Looking closely, you could see fragments of the ladders and stairs the monks had to scale in the old days to reach their bird's nest of a home. Some monasteries still had their rope baskets intact, hanging over oblivion. The less hardy would be winched slowly up the cliff face in these. It was a hard life for these medieval monks, I was sure, but one that constantly kept their eyes drifting upwards to the heavens.

As we flew home, I whispered my own prayer of thanks. In a week that went to fast, I had been privileged with a good glimpse of the fascinating, history-rich, beautiful country of Greece.