Temples, and searching for the perfect mix of touristy and authentic 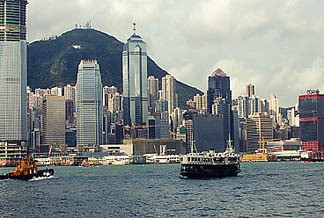 Angry and depressed, I sat in my hotel room in Hong Kong, looking out the window. I was cursing the $600 I'd just spent on a full fare airline ticket to get home. The flight I'd missed today had empty seats and would likely have plenty tomorrow, too. Instead of putting on standby passengers like me on this route, Continental Airlines crams on as much freight as it can every day. It doesn't care that it strands its workers, their parents or unsuspecting employees of other airlines. Money rules in this "to the last pound" efficiency.

Damn my luck, I thought. 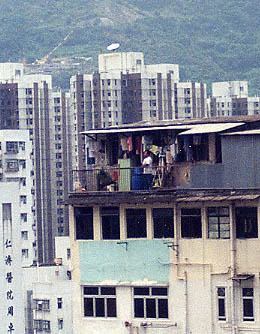 Suddenly, a movement caught my eye. I'd been looking out over the row upon row of 30-plus story apartment high rises. Atop a nearby one, I noticed a plywood shack had been constructed. A man was scrubbing his shirts in a bucket and hanging them to dry high above Hong Kong. Unlike the regular apartments beneath it, I could see this home had no air conditioning, and perhaps little in the way of plumbing. I didn't want to think about how hot that shack got on a humid, tropical day. As the man took a break from his washing, he lit a cigarette and leaned on the rail, seeming to ponder the world below. Was he mourning money lost on a quick, overseas jaunt? Hardly. Any woes of his were probably of a more dire, necessity kind. In an instant, my viewpoint changed and I ceased to worry about the $600. My own problems seemed pretty small.

Hong Kong has a way of making you feel that way, though. Its millions of people are squeezed into a small, geographical area. Picture New York City's skyscrapers clustered along the shore of a jungle-clad, mountainous island in the South Seas, and you have Hong Kong. Some would argue that when you look at Hong Kong, and the way it builds upwards for lack of space, you are looking at the future of our cities on Earth. Will we all one day live in Hong Kongs as our planet's population grows? 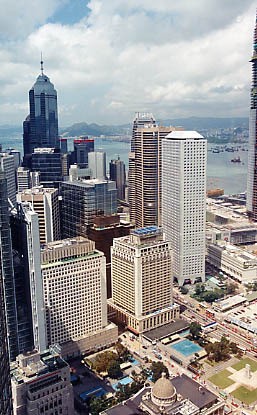 View of Hong Kong from Bank of China building

As bleak as my lead-in to this travelogue sounds, Hong Kong itself is anything but. The city works -- its masses go to their jobs, eat, sleep and play in a relatively clean, efficient urban environment. Transportation is a breeze, from its subways speeding beneath the city, light rail hurtling to the hinterland and ferries skimming to neighboring islands, it is all smooth sailing, so to speak.

I used most of Hong Kong's transportation means during my visit, too, beginning with the tram to the top of Victoria Peak for a scenic overlook. Only a clear, blue sky could have improved on the spectacular view. As it was, the mists and grays still gave it a subtle beauty. Walking through the busy city streets afterwards, I took in several of the intricate markets, and picked up some souvenirs despite myself. When, at noon, I'd checked off most of my day's list of things to see, I decided to visit one of the outer islands. A quick ferry ride plopped me ashore on Lantau Island, where I caught a bus to the Po Linn Monastery. We rode through Polynesian landscapes to the hilltop site, where the world's largest, bronze outdoor statue of Buddha gazed down at us. There was a surprising horde of tourists there, though, but I imagine at night (after they've left) the serene setting is perfect for metaphysical contemplation. 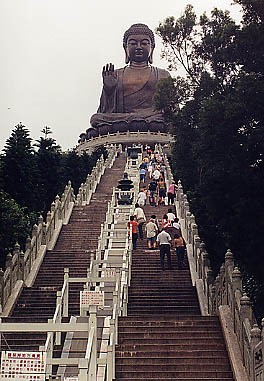 Day two saw me on a bus, again, heading north into the "New Territories," towards the mainland China border. My guidebook's description of an ancient, walled village with its fortifications still intact, had intrigued me. I stumbled upon the village almost by accident, though, as it is surrounded on all sides by a growing town. Inside the walls, the streets were single-file narrow and the houses squeezed together so tight that porches were rare and courtyards nearly nonexistent. The inhabitants are known as Hakka, and appeared to be mostly old women. Upon sighting me wandering their streets, they grabbed their distinctive, sombrero-like hats and closed in, shouting, "Picture, picture! Ten Dollar!" Obviously, they were used to posing for the few tourists that venture up here for the roughly $1.25 U.S. equivalent. I humored one of them, then tried my best to shoo off the rest.

All in all, though, Wat Hing Wai was a disappointment. Its trademark walls are unvisitable and surrounded by garbage, and its interior layout so claustrophobic you couldn't get a feel for it as a whole. It was the real, living thing, though, not a commercialized creation. Afterwards, I stopped by a walled village (Sam Tung Uk) not far from my hotel that had been turned into a museum. It was informative, well reconstructed, and well...too much in the other direction! I'd have enjoyed a more happier medium: A place still lived in, but one where you could walk the walls, peer through arrow slits, etc. 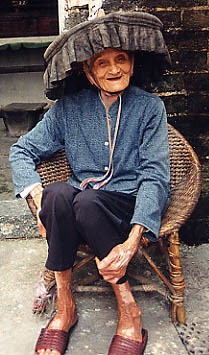 The mix was perfect at the Chi Linn Nunnery, later that afternoon. The setting was immaculate and gorgeous. The monks padded silently through the hallways, the statues of Buddha glistened with burnished gold, fountains bubbled, and the deep brown wood shone in the sunlight. The Nunnery was rebuilt recently in its original Tang Dynasty style, which uses no nails, all the wood fitting together with dowels. Chi Linn is sited on a slight rise, perhaps only a baseball throw away from a multilevel shopping center. However, it was still the proverbial island of peace in Hong Kong's sea of motion.

With more time on my hands, I rode the light rail north to Shattin and its Temple of 10,000 Buddhas. The temple is also a resting place for the ashes of cremated Buddhists. It is built atop a steep, wooded hill, and my guidebook mentioned something about 500 steps. Modern Hong Kong is efficient as ever, though, and an escalator whisks you up the shady slopes. The temple itself was a bit of a let down after Chi Linn, but still interesting. The 10,000 Buddhas are hand high ceramic statues painted a dusky gold and set in niches along the temple walls. Since I felt I hadn't breathed my daily quota of incense, yet, I headed back to Hong Kong for one final temple. Wong Tai Sin was bursting at the seams with worshipers, all waving handfuls of incense (or Joss) sticks. It was a carnival atmosphere, with some praying, some snapping photos, and others just stepping back and absorbing the chaos. The temple buildings were colorful with mint green tile roofs, many of them guarded by adorable little stone lions. Eventually, the clouds of smoke drove me from the temple -- now, I'd had my daily fill! 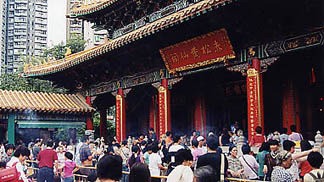 See my entry for Macau for the conclusion of this travelogue!