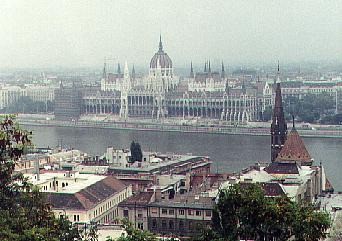 View across Danube to Pest

When I got the telephone call Sunday night, I knew our trip to Hungary would not go as planned. Scott and Gale were to fly the next day on Malev Airlines, while Mike and I traveled to Budapest on Austrian. Scott phoned with the news that Malev had canceled their flight, though. As it wound up, after delaying our trip one day, Mike and I went on without them.

I was compensated with an eagle-like view of Budapest as we flew in -- I could clearly see the city's layout and several landmarks. After we touched down, a late afternoon rain set it, cloaking the city in mist. We did get to walk around a bit, admiring the sprawling Parliament building and having dinner in a riverside restaurant (called the Columbus Pub, of all things!). We turned in early, though, knowing we had to cram all our sightseeing into tomorrow.

The next morning, we retraced our footsteps along the banks of the Danube River until we came to the massive Chain Bridge (site of the first permanent span across the river). Here, we crossed from flatter Pest to hilly Buda -- historically, two separate towns. We rode a funicular car up to the summit, admiring the city stretching out beneath us. We toured the Buda's Old City -- the Royal Palace, St. Matthias Church with its brightly-patterned roof tiles, the seven towers of the Fisherman's Bastion, and the quiet, cobbled streets and pastel-colored, centuries-old homes.

From there, we crossed to Margarita Island (Budapest's "Central Park"). We then took a cab to what I call a "fake castle." It was pretty, with tree-lined moat, towers and walls, but was a modern construction. We walked to Independence Square, looking up at the statues of the Magyar horsemen and all the kings of Hungary. The sun was slowly sinking as we returned to the Danube, and climbed to the top of domed St. Stephen's Cathedral, enjoying its views. From there, we strolled Vaci Utca, Budapest's shop-lined pedestrian boulevard. We lingered by the Danube's bridges and watched the sun set. 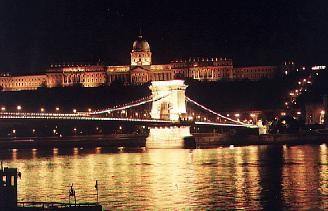 Dinner was a chance to continue my Pizza Hut tradition! I would estimate I've eaten at dozens of these "tastes of home" in various countries around the world. Why? Who knows? Just a light-hearted tradition. Our dessert was a picturesque night-time stroll along the Danube, with its bridges, churches and palaces brightly illuminated. Their golden glow reflected in the water, which rippled like molten brass as it passed beneath the shining buildings. It was almost as if the city was apologizing for our shortened trip -- wishing us to keep only golden memories of Budapest.