Rain in Ireland More of a Mood Setting than Annoyance

Hiking amidst green scenery and lots of History 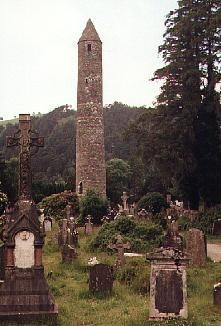 I had planned on leaving Saturday, but the angry ghost of Christopher Columbus again made things difficult for me. America West cancelled our 1130 Chicago flight (the one I was going to leave on). Which meant we sent all our passengers over to Southwest (my backup) overselling them. Our next flight wasn't until 4:30 pm, so since I had to transfer to O'Hare, I felt I wouldn't make it in time for my Ireland flight.

So, I gave up, and went Sunday instead. No problem that day, and I landed late morning in Dublin. I took the bus downtown and decided I would head straight to Glendalough in the Wicklow Mountains. A light mist was falling -- something I had better get used to, it turned out.

I arrived in Glendalough, a beautiful wooded valley with a couple lakes, around early afternoon. I found a B&B, checked in for two nights, and went to explore the valley. There is quite a scattering of monastic ruins in Glendalough -- including a 120' tower built in the 12th century, the fairly complete ruins of several churches, tall standing stone crosses, "beehive-type cells" the monks stayed in, etc.

The sun even came out for a couple hours while I was exploring the valley. Little did I know it, but it would prove to be my only glimpse of it during the trip. Anyway, it was a pleasant day -- wonderful scenery, cool ruins, waterfalls, you name it. I ended the day with dinner and a Guinness Stout in one of the two local restaurants.

The next day was my major hiking day. I planned on hiking the Wicklow Way, which runs along the hilltops thoughout the region. I would go as far north as I could get, then take the bus back. It was a drizzly, misty day as I started tramping north. The trail was easy to follow, matching up exactly with my Ordnance Survey map I'd purchased.

The scenery was neat, but I figured my pictures would suffer from the omninpresent drizzle. As it turned out, it "rained" all day. I was never soaked -- it was too light a fall. However, it was good "mood weather." Some views that were nice would have been spectacular in the sun. 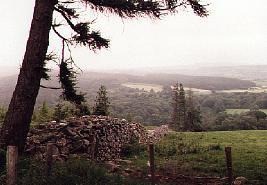 Just when I was getting to the steepest and most remote portion of the Way, I lost my way. I backtracked, doublechecked the map, but still couldn't find my way back on the main path. Somehow, I'd missed a turnoff and was being led downhill and east instead of uphill and northeast. I wasn't worried, though, I knew I'd end up on the road. Which I did. I think caught a ride down to the village of Roundhill, ate lunch and a Guinness in the pub, and decided my feet were sore enough for one day. I figured I hiked a good 15 miles that day. I caught a ride back to my B&B (yes, this was hitchhiking, something I hadn't done since Scotland years and years ago). Despite the (still) rainy weather, it'd been a good (if tiring) day.

The third day I rode the early bus back to Dublin and then went to the town of Trim. There is another handful of medieval buildings there, including the largest castle in Ireland. It was drizzling again (and would prove to all day long). The castle was cool. It is the one that appears in Mel Gibson's "Braveheart." They used once face of it as York for the siege scene, another side as Edinburgh and still another as Longshank's castle in London. They are restoring it, so you couldn't go inside the main keep, but could walk around the outer walls. I saw the other various ruins of churches and nunneries in the area, ate lunch in a pub, and headed back to Dublin. 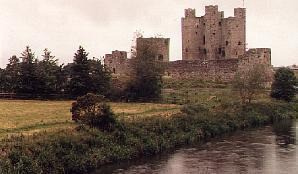 After finding a B&B and some gifts, the drizzle turned it up a notch. My explorations were cut short as the skies opened up for the first real hard rain I'd seen the whole trip. I took refuge in a pub (with a Guinness, of course) The next morning I returned home. No problems on any of my flights this time, and I spent that evening in my own bed. A short trip, but a good one. I now know there is a country on this planet where it rains more than it does in Scotland!